In theory, should the company encounter financial difficulties leading to bankruptcy, these shareholders could still benefit from the liquidation value distribution, which is expected to be higher than the purchase price. The liquidation value of these so-called net current asset value stocks is calculated as "current assets minus total liabilities."

Thus, short-term investors could be interested in the two companies listed below, as their stock prices are trading below their net current asset value (NAV) per share and they are recommended by Wall Street.

The first stock to consider is Broadmark Realty Capital Inc. (

BRMK, Financial), a commercial real estate trust company headquartered in Seattle, Washington and operating in the United States. The company operates a portfolio of short-term escrow loans to finance the construction and development of residential or commercial properties in the United States and investment activities related to those assets. 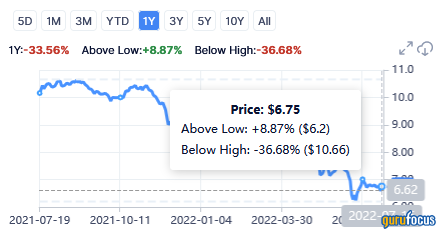 In its earnings report for the first quarter of 2022, the company stated that it is maintaining a cautious stance for the time due to the current competitive environment in the commercial real estate lending markets.

From a financial strength standpoint, the company also said that the balance sheet allows it to feel well positioned to continue operations and seize any additional opportunities that may arise in the future.

Additionally, the hawkish U.S. Federal Reserve is not expected to affect the balance sheet as it is well hedged to support the company's growth strategy in each cycle.

As of March 31, total liquidity was $232.4 million, including cash and cash equivalents of $97.4 million and an undrawn line of credit of $135 million. The balance sheet also showed $592 million in unfunded debt. As of March 31, 12% of the total committed portfolio was in default.

The company currently pays a quarterly cash dividend of 7 cents per common share. The last payment was on July 15, resulting in a dividend yield of 12.44% as of this writing.

As of July, the stock has a median recommendation rating of overweight with an average target price of $8.17 per share, reflecting more than 20% upside potential from current levels.

The second stock short-term investors could be interested in is Agora Inc. (

API, Financial), a Shanghai, People’s Republic of China-based provider of video and voice calling, interactive live streaming, chat and signaling to developers who then integrate these technologies into their applications for real-time engagement activity on the web. 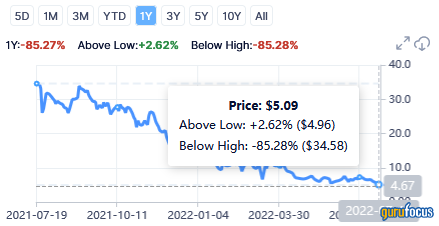 The company said its business performed strongly in the first quarter of 2022, despite a challenging market environment. The company has seen continued positive momentum in revenue growth in the Middle East, Southeast Asia and European markets as more developers adopted Agora's technology.

According to the company, the increased attitude towards virtual engagement activities was not just a temporary trend attributed to measures taken to contain the Covid-19 virus, but something more consistent on which hopes for business growth can be pinned up.

However, the first quarter of 2022 ended with another net loss of 24 cents per American depository receipt, missing analysts' average estimate by 5 cents on lower revenue of about $39 million (down 4.1% year-on-year). However, revenue did beat analysts' median projection by $1.6 million.

It's also worth noting that as the company continued to expand its distribution network. Sales and marketing expenses increased nearly 60% year-over-year to $14 million, while general and administrative expenses increased more than 60% to about $9.2 million. The number of active customers increased by 16.4% to a total of 2,706.

As of July, the stock has a median recommendation rating of buy with an average target price of $10.48 per share on Wall Street, reflecting more than 106% upside potential from current levels.