Asbury Plans to Triple Revenue by 2025

An automotive holding company with excellent fundamentals and a bargain price

ABG, Financial) has ambitions that might launch it into becoming an even bigger player in the auto aggregation business.

Based in Duluth, Georgia, the company is one of the major automotive aggregators. Through organic growth and acquisitions, it now operates 148 new vehicle dealerships in 15 states. That involves 198 franchisees and 31 brands of American, European and Asian automobiles.

In addition, it operates seven used vehicle dealerships, 34 collision repair centers, an auto auction, a used vehicle wholesale business, a provider of service financing and insurance, as well as an online dealership (Clicklane).

In 2021, it generated revenue of almost $10 billion, and its growth plan calls for revenue of $32 billion per year by 2025. This slide from its second-quarter 2021 investor presentation shows the forecasted sources of this growth: 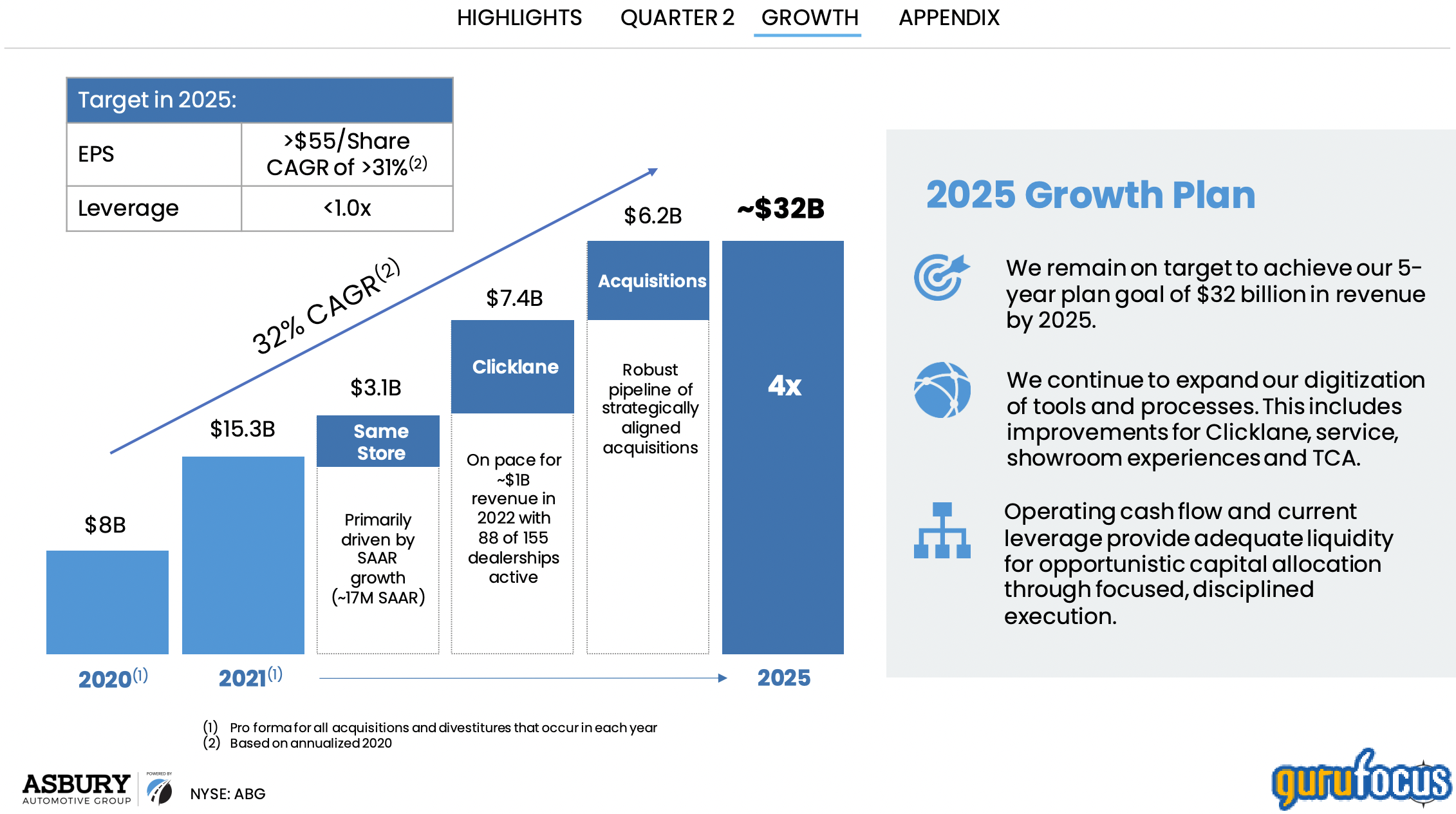 In its 10-K for 2021, Asbury reported it is the sixth-largest automotive retailer in the U.S. It also explains that the industry is highly competitive by price, service, location and selection. Competitors vary according to each line of business, but include well-known names such as AutoNation (

According to a graph in its annual filing, Asbury outperforms both the S&P 500 and a peer group: 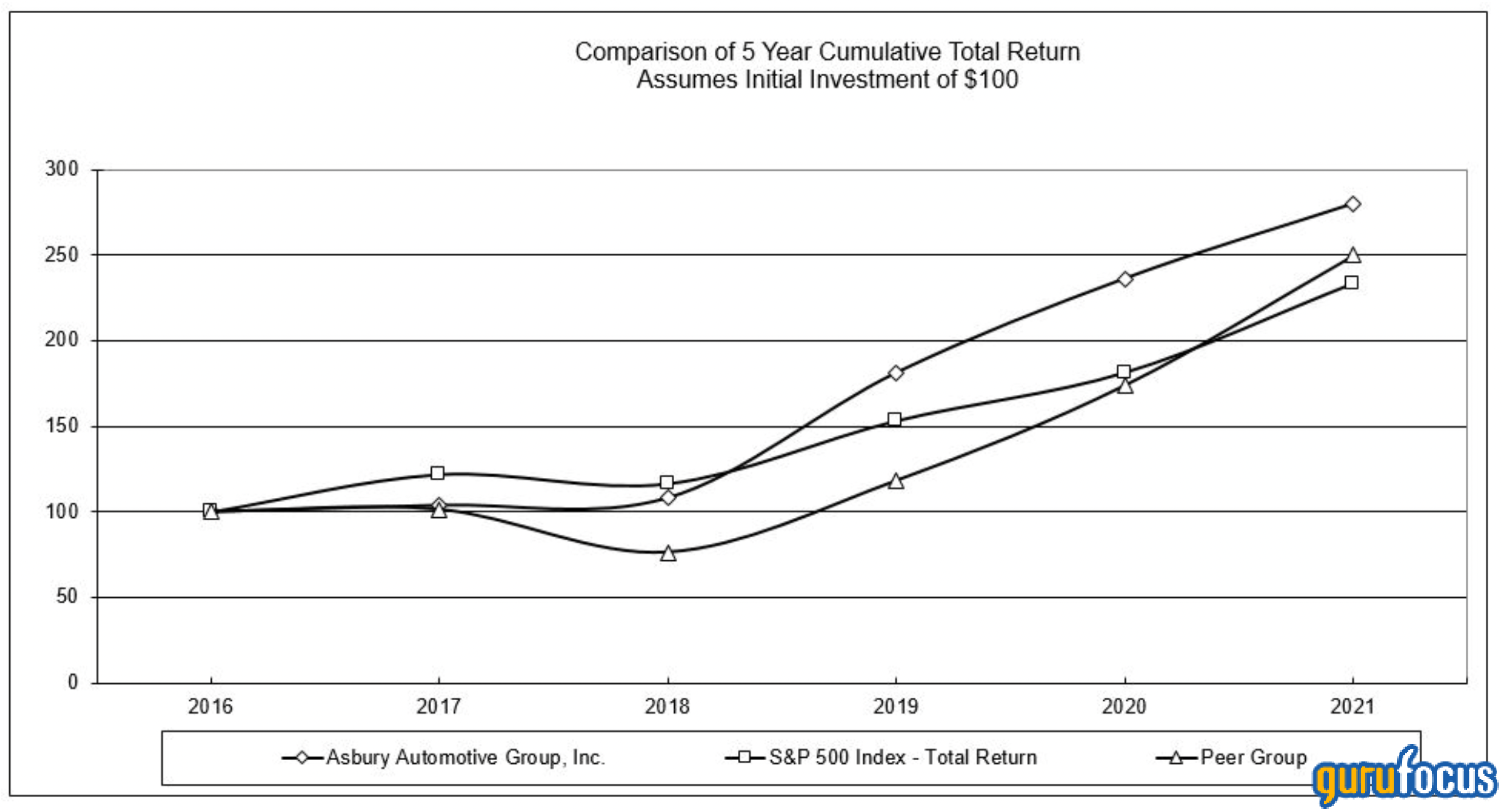 The company looks to its customer service (its primary mission), Clicklane (“the automotive retail industry’s first, end-to-end, 100% online vehicle retail tool”) and its ability to use factory approved replacement parts along with its trained technicians.

Although this year has been a dud so far, it has posted robust returns over three, five and 10 years: 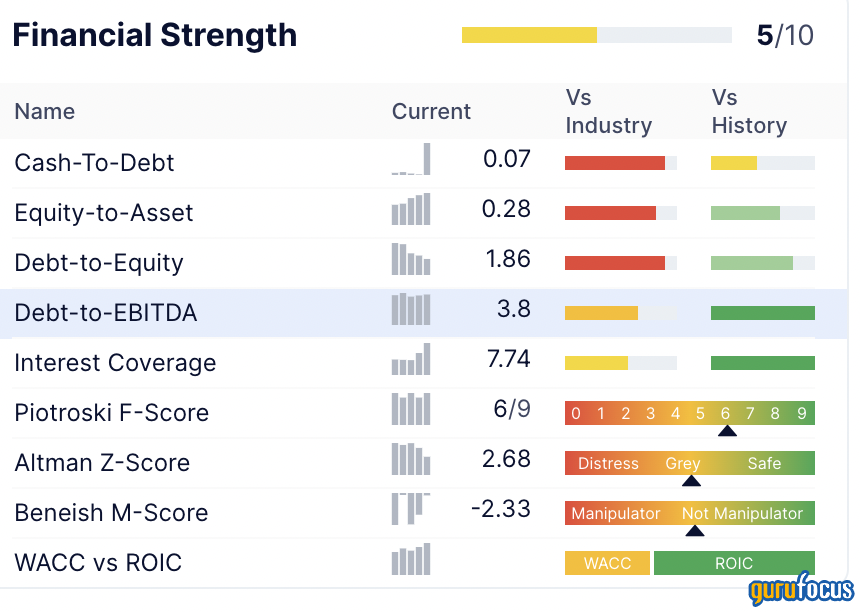 As we can see from the first four ratios and the interest coverage ratio that Asbury carries a significant amount of debt, weighing its financial strength down.

In its annual report, the company noted:

“We have the ability to incur substantial additional debt in the future to finance, among other things, acquisitions, working capital and capital expenditures, and new and used vehicle inventory, as well as to refinance new and used vehicle inventory, subject in each case to the restrictions contained in our debt instruments and other agreements existing at the time such indebtedness is incurred. We will continue to have substantial debt service obligations, consisting of required cash payments of principal and interest, for the foreseeable future.”

It also generates a lot of cash, but to put the cash and debt situation in context, at the end of March it had cash per share of $13.41 and total debt per share of $183.52.

The company knows how to create value. It generates a return on invested capital of 16.04%, nearly double the weighted average cost of capital at 8.8%. 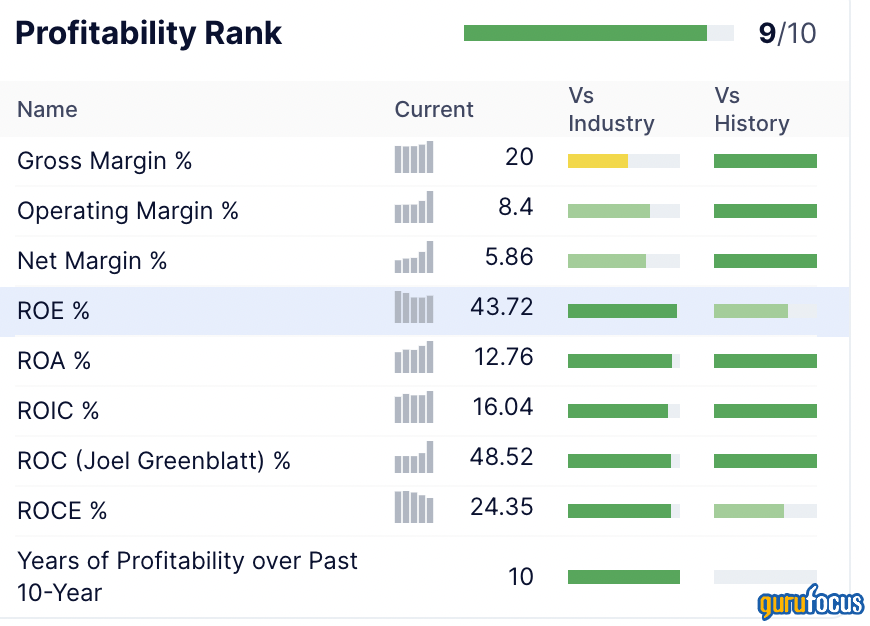 While Asbury's margins are good but not exemplary, its return on equity is 43.72%, which is better than 97.20% of companies in the vehicles and parts industry. As such, it received a high score for profitability from GuruFocus. 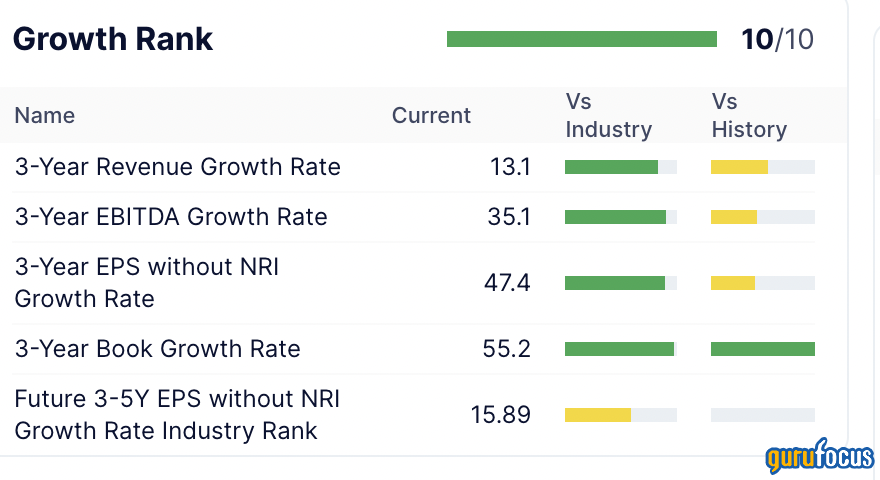 Asbury gets an impressive 10 out of 10 for growth metrics. What’s even more impressive is how it is turning revenue into earnings. The 13.1% growth in revenue has led to 47.4% growth in earnings without non-recurring items.

Note, too, how free cash flow has grown since the first quarter of 2019: 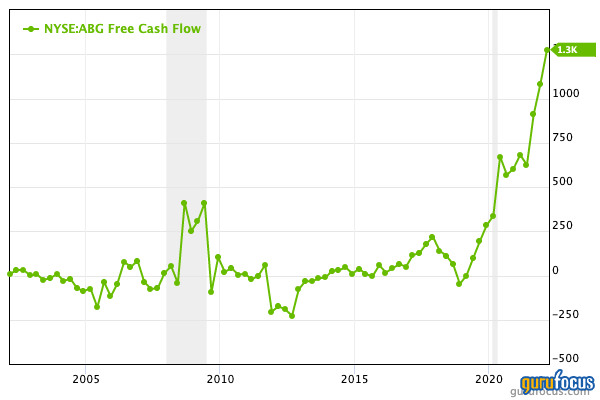 There is no dividend from Asbury, as it focuses on growth, including the costly business of acquisitions. And shareholders who hoped for returns through share buybacks will be disappointed.

While the company has repurchased shares in the past decade, it issued more than it repurchased in the final quarter of last year and the first quarter of this year: 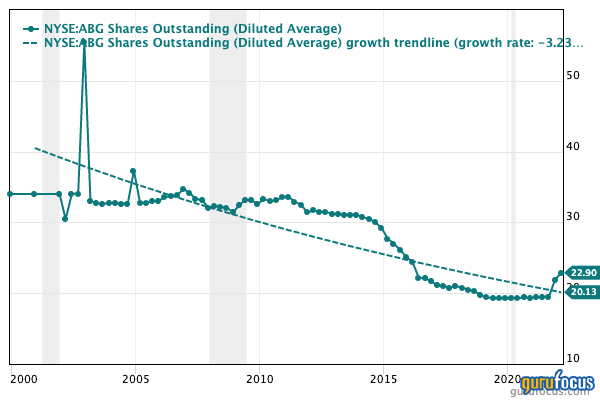 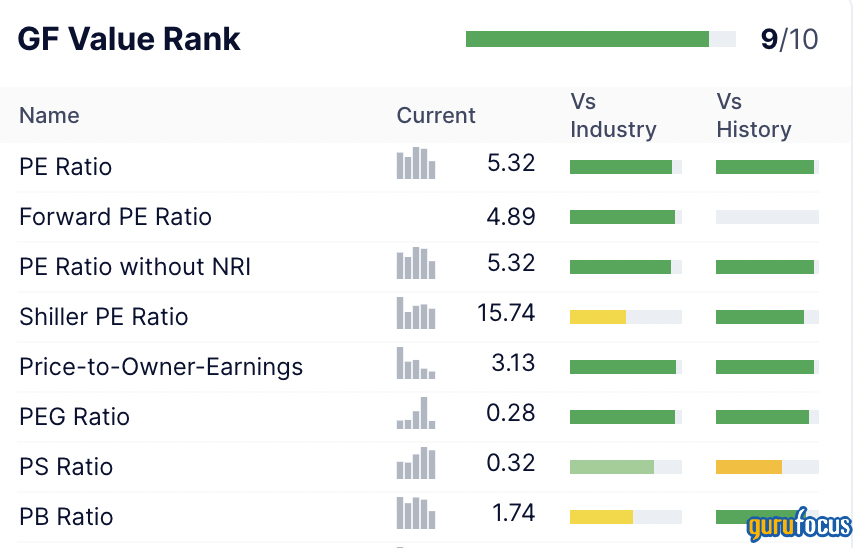 Lots of industry-leading dark green bars tell us the company should be a good buy. They are backed up by the overall value rank of 9 out of 10, which is based on the GF Value chart: 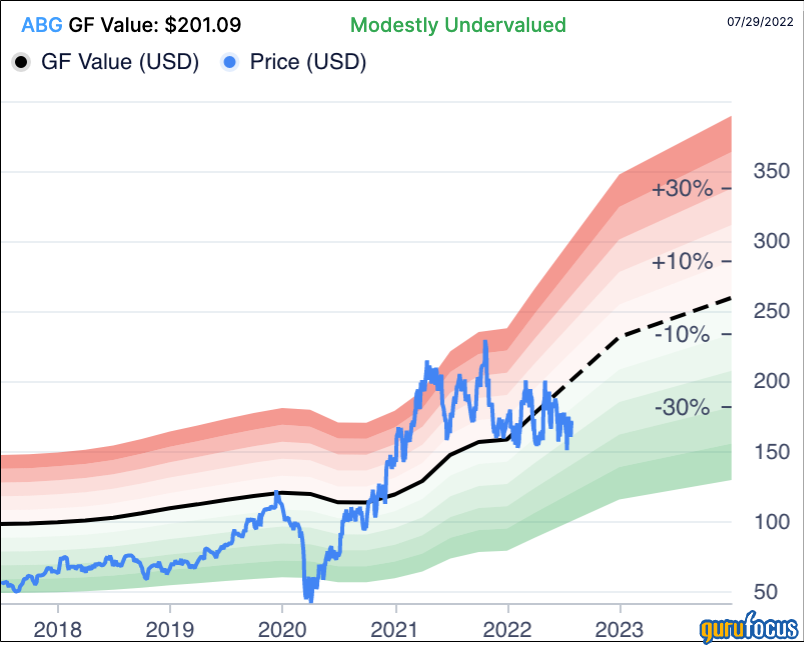 The discounted cash flow calculator is even more bullish, seeing a massive gap between the current price and its potential price: 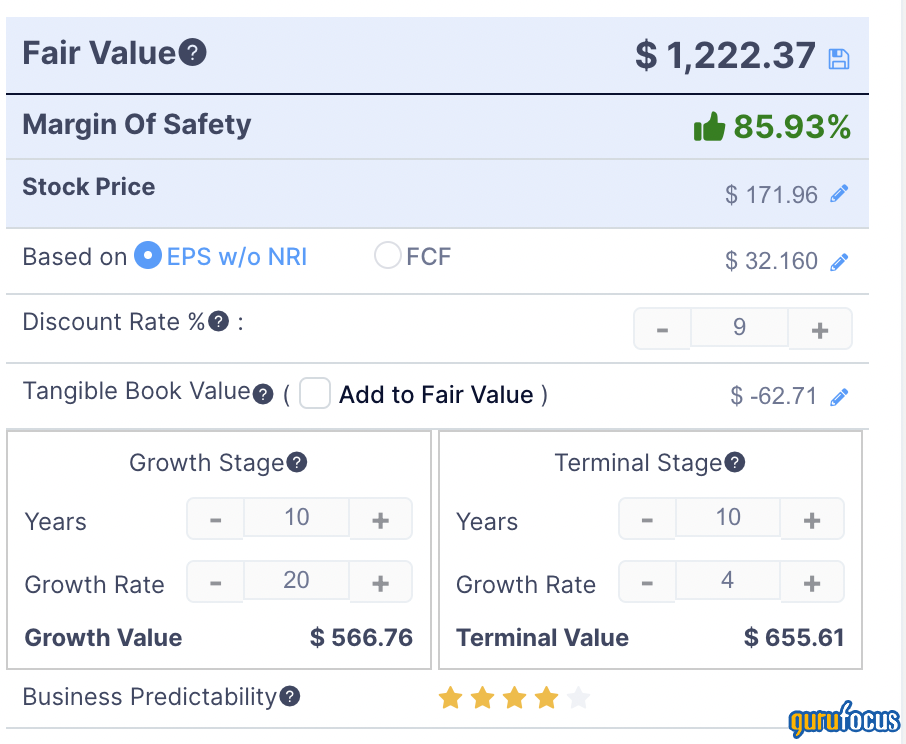 The default DCF growth value is set at 20%, which is restrained considering its actual earnings per share without NRI growth figures: 26.50% over 10 years, 27.80% over five years and 90.30% over one year.

Even 20% per year seems high in a world of conventional valuations. However, as we have seen, the company plans to more than triple its revenue by the end of 2025. It also has a history of converting its revenue growth into even better Ebitda and earnings per share growth.

Both the trailing and forward price-earnings ratios are low, in the mid-single digits, which is not what we expect from a company with very good fundamentals.

Asbury also enjoys a low PEG ratio, thanks to its low price-earnings ratio and a strong five-year average Ebitda growth rate of 15.91% per year.

Recording high marks across the board, Asbury is one of America’s highest-ranked, by fundamentals, companies based on the GF Score of 95 out of 100. As such, it has high outperformance potential going forward. 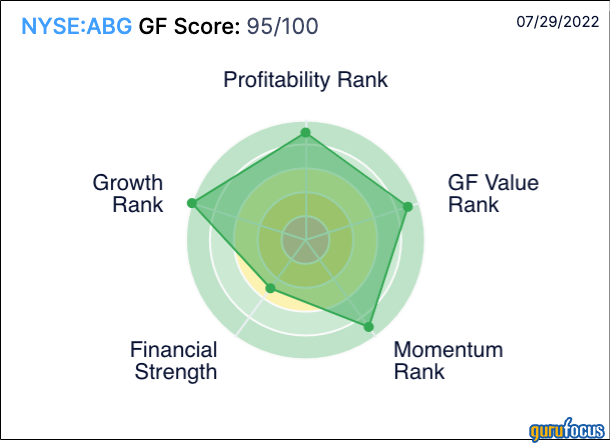 Despite this strong showing and its ambitious growth plans, Asbury finds a place in only four gurus' portfolios. The three biggest shareholders are:

Asbury Automotive Group wants to keep growing, and growing dramatically. It foresees a more than three-fold growth in revenue by the end of 2025.

It is well positioned to deliver on that goal, with very good fundamentals and a share price that is something of a bargain.

Growth investors will want to keep an eye on it, while value and income investors need to keep looking.