With economies around the world either in recession or on the brink of recession, shares of many commodity stocks have been sinking in anticipation of lower demand for their products.

However, even though copper prices more than doubled between mid-2020 and mid-2022, analysts are expecting these higher prices to stabilize rather than drop in the near future. Recessionary conditions will be pushing up against the necessity for copper in electronics and clean energy generation.

The stocks of copper miners falling despite expectations of sustained demand have caused some value opportunities to emerge among copper producers. Thus, let’s take a look at three of the companies with some of the largest copper reserves in the world that are currently trading below GF Value.

On Aug. 3, shares of Freeport traded around $28.87 apiece for a market cap of $41.33 billion and a price-earnings ratio of 8.77. After a 31% decline year to date, the GF Value chart rates the stock as modestly undervalued. 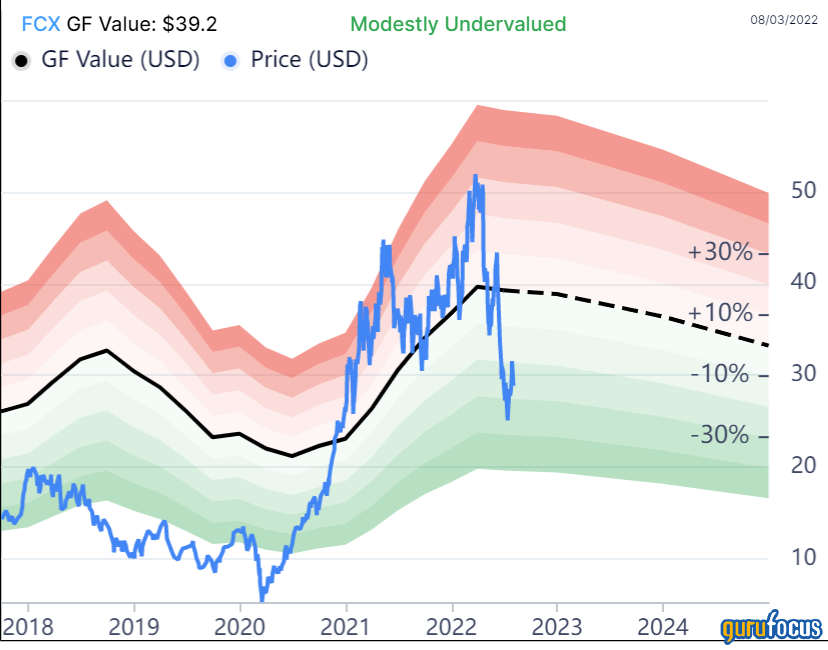 The company completed an expansion of mining activities in Grasberg in 2021, and it plans further expansions in the U.S. and Chile projects. It has been focusing on reducing debt to strengthen its balance sheet against market uncertainties and rising interest rates, an endeavor which has been successful given its Piotroski F-Score of 8 out of 9 and cash-debt ratio of 0.86.

While Freeport aims to use as much as 50% of its excess cash flow for shareholder returns, it should be noted that much of this goes to share repurchases rather than dividends. This seems fine until we consider the three-year share buyback ratio of -0.2, meaning the company has a history of issuing more shares than it repurchases. The forward dividend yield is 2.07%.

BHP, Financial), an Australian miner of copper, iron ore, nickel, metallurgical coal and potash, has an estimated 41.1 million tons of copper reserves. Most of its copper mines are located in Chile, but it has one in Australia. The company also produces oil and natural gas, though it is planning to sell these operations to Woodside Energy Group (WDS, Financial).

Shares of BHP Group traded around $53.44 each on Aug. 3 for a market cap of $195.93 billion and a price-earnings ratio of 8.61. The GF Value chart rates the stock as modestly undervalued; shares are mostly flat from the beginning of the year. 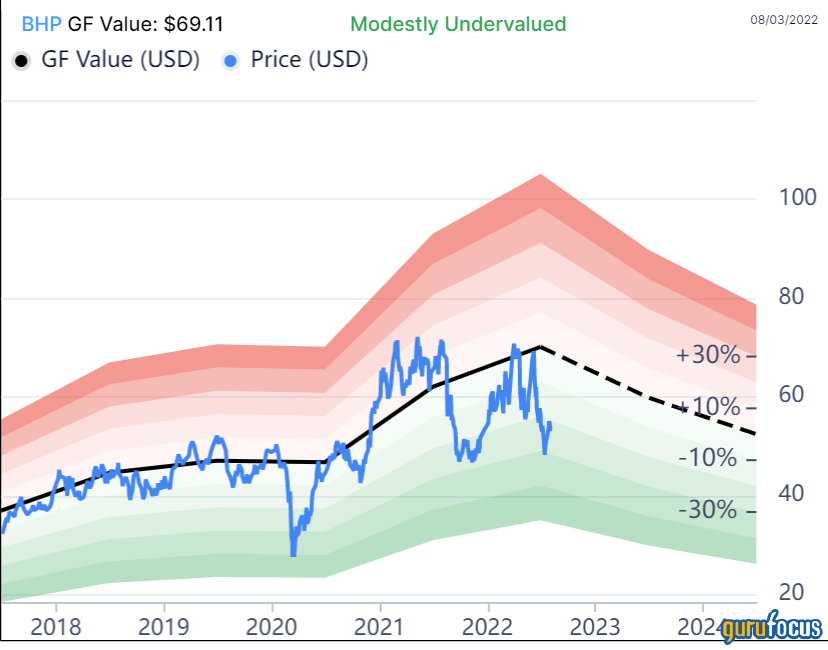 BHP Group is investing heavily to expand its copper, nickel and potash operations and secure long-term exploration partnerships, which will be funded in part by the divestment of the petroleum business and coal assets. The company’s balance sheet is strong with a Piotroski F-Score of 9 out of 9 and a cash-debt ratio of 0.66.

The forward dividend of 13.09% is excellent, as is the three-year dividend growth rate of 16.90% and the three-year share buyback ratio of 1.70%. The payout ratio is high at 0.97, which is a red flag, but divestments could keep cash flows stable enough until the company’s growth efforts pay off.

SCCO, Financial) has an estimated 67.7 million tons of copper reserves from mines in Mexico and Peru. Focused on copper and the byproducts of mining the red metal, this company is based in the U.S., but it is majority-owned by Grupo Mexico (GMBXF, Financial), a Mexican mining, infrastructure and transportation company.

On Aug. 3, Southern Copper shares changed hands for $46.54 apiece for a market cap of $35.98 billion and a price-earnings ratio of 12.32. The stock has lost 24% since the beginning of the year, giving it a GF Value rating of modestly undervalued. 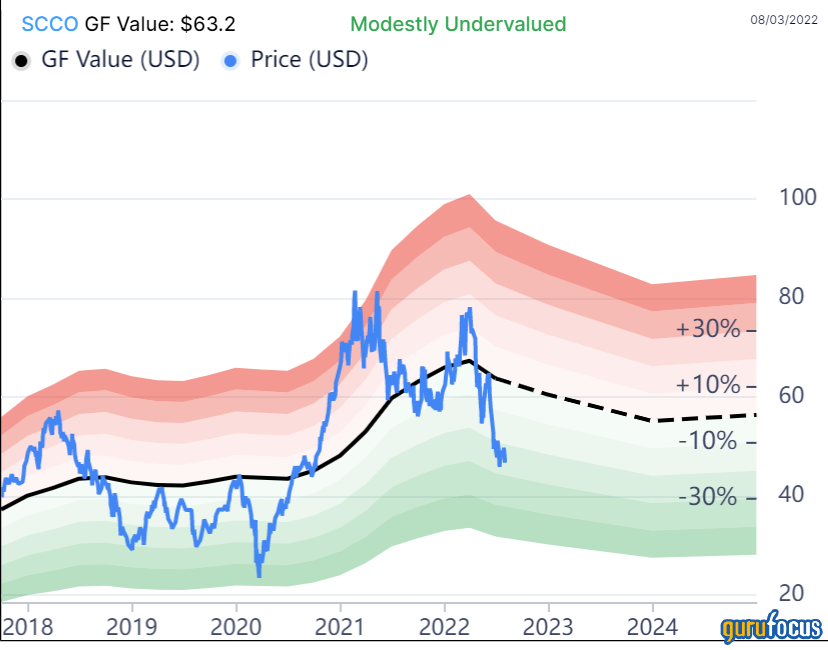 First in the world in terms of copper reserves but only fifth in terms of copper production, Southern Copper has unparalleled opportunities for growth if it plays its cards right. With legacy reserves near depletion, the company could face a near-term downturn. Output is expected to bottom in 2022 before growing by 73% through 2023 on the back of large-scale expansion projects.

Southern Copper’s forward dividend yield is impressive at 8.93%. It has a three-year dividend growth rate of 31.7%, showing a strong commitment to shareholder returns. However, the dividend payout ratio of 1.10 could mean a dividend reduction soon in light of short-term output headwinds. Compared to BHP, Southern Copper has a more erratic dividend history, though not as erratic as Freeport’s.