2022 has been a volatile year in the financial markets

So far, 2022 has been a volatile year in the financial markets, and as a result, investors have been on an emotional rollercoaster, questioning whether we are going into a recession, or are already in one? Rampant inflation caused by COVID, supply chain disruptions, the Russia-Ukraine conflict, monetary policy, fiscal policy, wage increases, and other factors have been contributing to all the anxiety. Economic data (GDP – Gross Domestic Product) just released last week showed the economy contracting by -0.9% in the 2nd quarter after declining -1.6% in the first quarter of 2022 (see chart below). 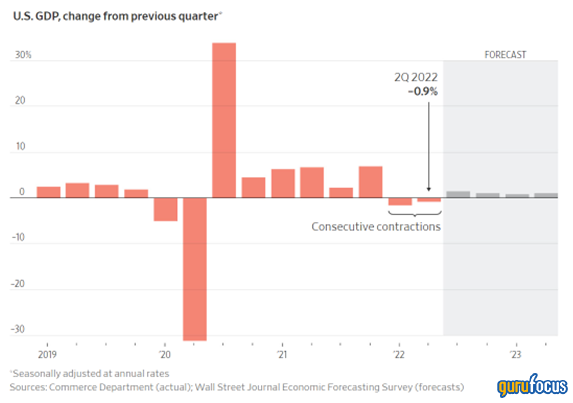 Typically, economists have defined a recession by two consecutive quarters of negative GDP growth, which we have now technically achieved, as shown in the chart above. But, not so fast. The official, mutually agreed upon arbiter of a U.S. “recession” is the NBER (National Bureau of Economic Research), which defines a recession more broadly. In order to prevent recession declaration mistakes, the NBER typically waits until long after the fact before making a definitive recession proclamation, in part because the recently released data could eventually be revised higher to a positive level. Revisions, both positive and negative, are commonplace in the never-ending flood of economic data. In addition to negative GDP output figures, the NBER committee considers other factors. For example, household income and unemployment, which by many measures remains white hot and currently remains at generationally low levels (3.6% unemployment rate) are considered when classifying a recession (see the historically low unemployment claims chart below). 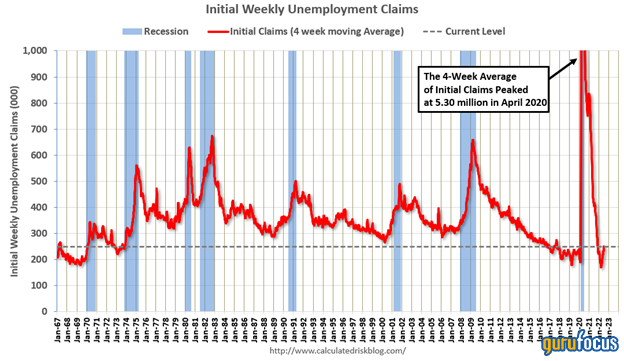 So, this begs the question, “Does it really matter whether we are in a recession or not?” The short answer is “no”. The dynamics that really matter are the ones relating to the future. Ultimately, the stock market is forecasting how much worse or better will the economy become? And how long will the pain last? Getting correct answers to these questions is always challenging, but what we do know is that we have had 12 recessions since World War II, and our country is batting 1,000% on recoveries. And the economy has grown stronger coming out of each recession, every time. Therefore, now is not the time to get depressed and climb under a rock. Rather, it’s time to sharpen your pencil and go bargain hunting for opportunities during these corrections.

Well, investors (at least the ones still remaining) came out of their caves this month and actually bought stocks. For the month, the S&P 500 impressively climbed by +9.1% and the NASDAQ index soared by +12.4%. How did we suddenly go from gloom and doom to boom and zoom this month? For starters, although inflation has remained stubbornly high, there are signs of a disinflation light at the end of the tunnel. Anecdotally, we see gasoline prices coming down, while housing prices are softening and various food prices are beginning to come down from the stratosphere. On the economic data front, the Federal Reserve’s inflation measure of choice (Core PCE) appears to be stabilizing as well (see chart below). Core PCE for June rose by 4.8%, but this metric was down from 5.2% in March, and it is up a smidge from the 4.7% figure reported during May. 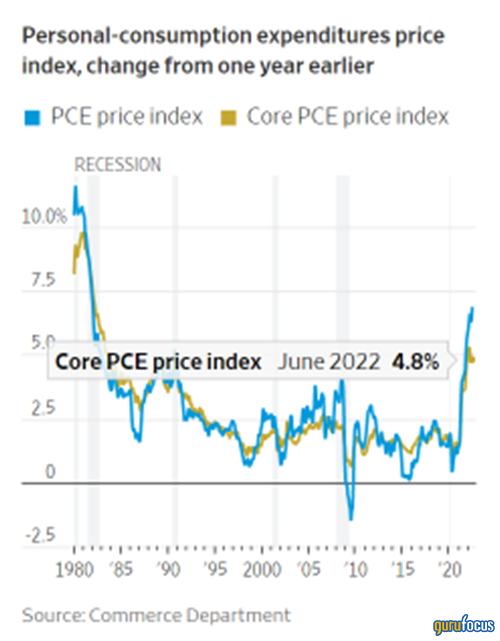 Another factor contributing to investor optimism this month revolves around the Fed’s monetary policy. Just last week, Fed Chairman Jerome Powell and the members of the FOMC (Federal Open Market Committee) decided to set the Fed Funds target higher by +0.75% to a range of 2.25% – 2.50%, the fourth increase this year (see chart below). For many traders, they interpreted this move as getting one step closer to a terminal rate in the 3.0% – 4.5% range by next year. In other words, a broad number of market participants are beginning to view the rapid escalation of rates this year as a way of accumulating dry powder for potential stimulative interest rate cuts in 2023, if the economy continues to weaken or stagnates further. 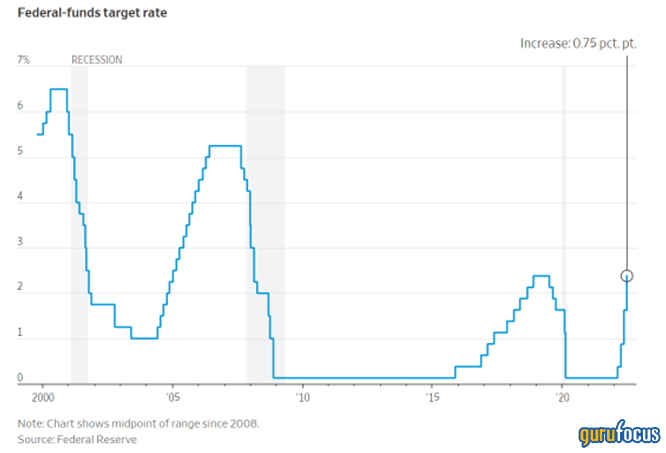 There are plenty of challenging forces surrounding us, including an overhanging recession, that could push you into a depression, however the ability to invest in certain areas of the market where prices are on sale should bring plenty of happiness. As investing legend Peter Lynch stated, “I’m always more depressed by an overpriced market in which many stocks are hitting new highs every day than by a beaten-down market in a recession.” Said differently, no matter what transpires in the coming months, “This too shall pass.”

DISCLOSURE: Sidoxia Capital Management (SCM) and some of its clients hold positions and certain exchange traded funds (ETFs), but at the time of publishing had no direct position in BRKA/B or any other security referenced in this article. No information accessed through the Investing Caffeine (IC) website constitutes investment, financial, legal, tax or other advice nor is to be relied on in making an investment or other decision. Please read disclosure language on IC Contact Page.