The market has lost patience with the company, but new management is well placed to turn it around

SNN, Financial) (LSE:SN., Financial) seemed to be making progress after its 2021 results in February. Its half-year report published at the end of July was essentially a profits warning. But since the stock trades at pretty much a five-year low and is rated significantly undervalued based on the GF Value, it is worth another look. 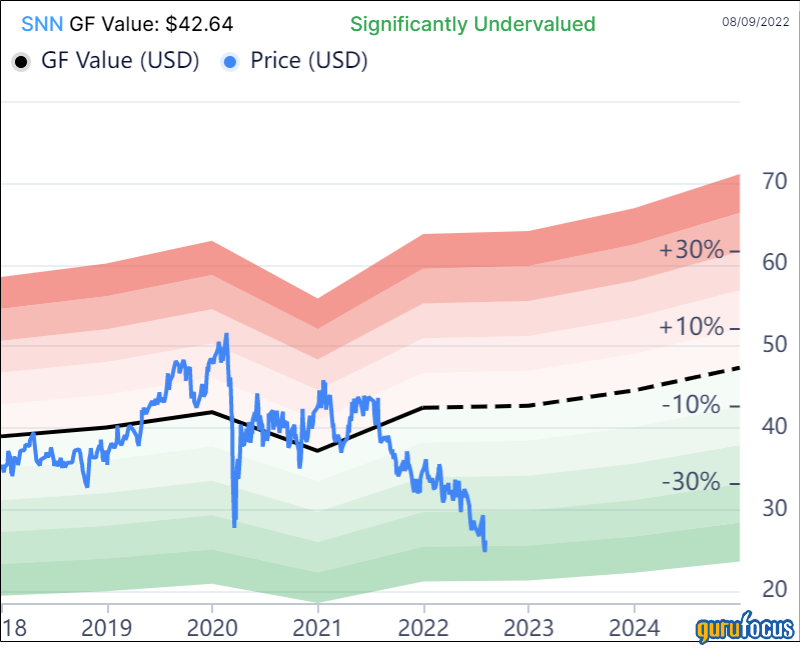 Regular readers will know I like to use the Piotroski F-Score and the Altman Z-Score as a first screen of value and financial strength. Watford, England-based Smith & Nephew scores well on both counts with 7 for the Piotroski F-Score and 3.02 for the Altman Z-Score. This gives me confidence the share price action should not get significantly worse.

With the stock at a five-year low, many investors will be throwing in the towel after the half-year results without thinking carefully that a turnaround from new boss Dr. Deepak Nath is in sight for the orthopaedics, wound care and sports medicine specialist. The results might look like a stumble, but could be a kitchen sinking from management so that the first full-year results next year can be compared to a lower base.

The reality is that Smith & Nephew has a strong competitive position. Its problems should be temporary and the underperformance in orthopaedics has been met by a strategy to fix them. As Covid‑19 begins to fade into the background, the company should find increased levels of business due to the pick-up in volume from elective surgical procedures, especially in the hip and knee implant business.

Its two other segments, Sports Medicine and Advanced Wound Management, also have big long-term growth potential, which can match the upturn in orthopaedics. First-half results for 2022 saw underlying sales growth of 3.5%, which is a good starting point. That was disguised by the strong dollar, which offset these gains, meaning in its statutory reporting sales looked flat for the first six months of the year.

However, Nath held Smith & Nephew’s guidance for underlying sales growth of 4% to 5%, but he also warned that profit margins would likely miss expectations and drop to 17.5% from last year’s 18%.

Smith & Nephew had originally guided for 18.5% this year. Nath attributed the change to the dollar, Chinese lockdowns and supply chain problems as factors, so I think I can let these go as they were out of the control of the company. The CEO also highlighted input cost inflation, which probably was another reason investors want to give up on the stock.

The main issue with the company recently has been poor execution at the orthopaedics unit, which is something Nath recognizes. That is pleasing to know because this business still generates about 40% of group sales. Given Nath only took up the CEO post in April, it would be harsh put this on him. The fact he recognizes the problem is the starting point for his task to get the orthopaedics business back to its best.

Nath has implemented a review of the business and is pushing to improve productivity. I am also very encouraged that he is pushing for an emphasis on investments into long-term research and development. The temptation could be there to cut costs in the short term to score quick improvements to net income, but this kind of strategy would be short-sighted and would hurt the business in the longer term. Innovation in medical equipment relies on good research and development.

The half-year results left the interim dividend unchanged at 14.4 cents per share. This does signal some sort of confidence in the future. The 2021 dividend announced back in February was to keep it flat for a full-year payment of 37.5 cents, so it seems as if the ship has been steadied. Also, management has an agenda to enhance cash returns through a share buyback scheme, which will aid Smith & Nephew’s earnings per share growth, all else equal. The company spent $125 million on share buybacks in the first half, though this did not provide much support for the share price. The program has another $125 million to run in second half of this year. The last time the company ran a share buyback of any size was in 2016. Although the buyback has not supported the share price thus far, it is reducing the share count and must be counted as a form of capital returns to shareholders, which is always welcome.

The stock stills trades at a discount to comparable U.S. companies like Stryker (

SYK, Financial) and Zimmer Biomet (ZBH, Financial). Once management has some time with their feet under their desks, this discount should go away.

That would be driven by orthopaedics getting up and going again, with the productivity plans starting to push profit margins up. This would drive earnings estimates upwards, prompting investors to give the stock a rerating and closing the valuation gap.

A rise in earnings and a higher multiple at the same time would provide a powerful boost to the stock.

Smith & Nephew is very much on my watchlist.