Bill Ackman Takes a Slice Out of Domino's Pizza

Ben Alaimo
Aug 24, 2022
Bookmark
Summary
Bill Ackman (Trades, Portfolio) is a legendary activist investor who is the founder and investment manager of Pershing Square Capital Management. As of the investment firm's second-quarter 2022 13F report, it had $7.46 billion in U.S. common stock holdings. Ackman runs a focused, high conviction portfolio, with just seven stocks after the Domino's sale. Ackman has always held that it’s better to invest in his "best one to five ideas as opposed to ideas six through 10."

Ackman has recently made some fairly volatile moves with his stock portfolio, despite being a long term investor. For example, Ackman bought Netflix (

NFLX, Financial) in the first quarter and then abruptly sold it after the company reported declining subscriber numbers.

More recently, Ackman has sold his entire position in Domino’s Pizza after purchasing it just one year ago. Ackman originally purchased shares in Domino’s Pizza at an average price of $369 per share in the first quarter of 2021 and then added to his position in the third quarter of 2021 when the stock was trading at an even higher average price of $505 per share.

Then in the first quarter of 2022, Ackman trimmed this position by ~1%, which wasn’t a major cause for concern. In the second quarter of 2022, Ackman slimmed the position by just 0.32%, which seemed more like a housekeeping trade. Then, Ackman surprised his dedicated followers by selling all of the remaining 2 million shares of Domino's on July 25, according to GuruFocus Real-Time Picks, a Premium feature.

On the day of the great sellout, shares of Domino's traded for an average price of $387.99 apiece. At this price, it looks as if Ackman might have only squeezed a small profit of ~5% at best compared to the average prices during the periods in which he was buying. He may have even lost money or just barely broke even depending on what his exact buy prices were.

According to Ackman's recent letter to shareholders, as of Aug. 16, the company had decided to sell Domino’s Pizza with the intention to use the proceeds for “alternative investment opportunities.”

Ackman praised Domino’s Pizza and its strong prior business performance, which included “three-year stacked growth for the second quarter of 17% in the U.S., up 560 basis points sequentially.”

Pershing Square believes this strong performance was driven by pricing power and “operational changes” which led to “improved staffing and labor utilization.”

The “positive developments” caused a “significant recovery” in its share price and “its valuation increased to more than 28 times our estimates of the next 12 months' earnings."

Therefore, it seems Pershing Square decided to sell the company due to the “relatively high valuation in the context of a volatile market environment.”

These comments lead me to believe Ackman may have actually squeezed a profit out of the deal. He seems a little too optimistic than I would expect for someone selling at a loss. Ackman finished his statements on Domino's with praise of the management team:

“We have enormous respect for Domino’s and its management team led by Russell Weiner, and we expect the company to continue its long track record of success.

One thing Ackman didn’t mention in his statement was the relatively weak second quarter performance by Domino’s. The company generated revenue of $1.07 billion, which was up just 3.2% year over year, though this still beat analysts' estimates of $1.05 billion and thus was positive overall. However, the company’s earnings per share declined by 7.8% year over year to $2.82, which was vastly below analyst consensus estimates of $2.90. 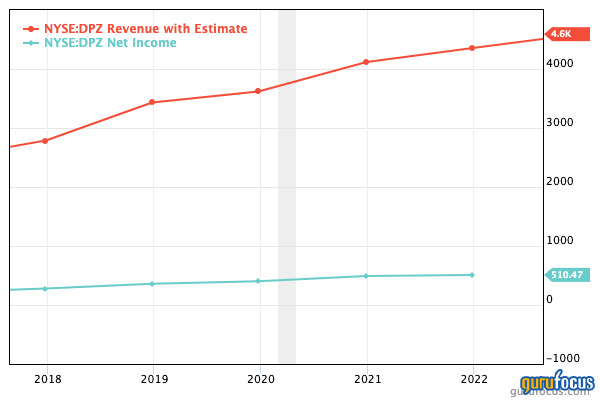 Global retail sales also declined by 3% and U.S. sales declined by 0.6%, which wasn’t a positive sign. Net income was $103 million in the second quarter, having declined by 12.1% year over year. 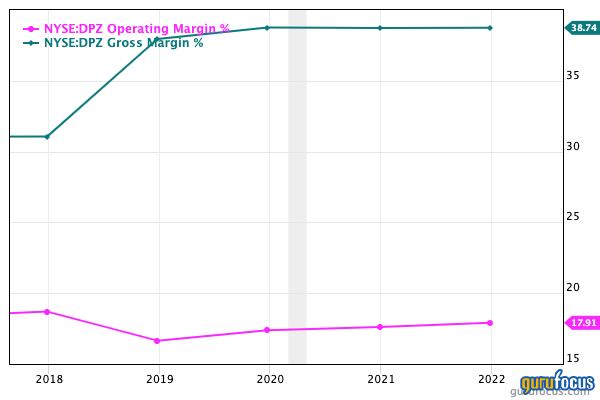 Domino’s Pizza experienced major growth during the lockdowns in 2020, but now it seems that demand is correcting and further growth in the U.S. market will be challenging. Another reason for this is the vast amount of competition in the food delivery market from Uber (

As a consumer, when deciding what to eat, a person will likely find it easier to log onto one of the popular delivery apps where the choice of food is abundant, from sushi to burgers and of course pizza. I do believe Domino’s Pizza is special and does have a certain mouth-watering taste, but that is just my personal preference.

Another factor to consider is that we are now in a high inflation environment where wages are failing to keep up. Consumers' living costs are being squeezed by higher energy and food bills. Therefore, splashing out on an extra expense like getting food delivered may not be as feasible for many.

Internationally, Domino’s has also exited the Italian market after a seven year slog in the home of pizza. I see this as pretty obvious given there has never been a lack of quality pizza in Italy, and the Italian people tend to have traditional taste. In addition, the lockdowns of 2020 caused many local restaurants to offer fresh gourmet pizza delivery options, which caused an oversupply in the market.

Domino’s did partner with a local company, ePizza SpA, which had aggressive plans to expand. However, to accomplish this, they piled on over 10 million Euros ($9.97 million) in debt and has now filed for creditor protection.

Domino’s Pizza has a highly leveraged balance sheet with an eye-watering $5.3 billion in total debt and just $114 million in cash and short-term investments. Given the rising interest rate environment, higher debt servicing costs are expected for floating rate loans, which will impact the company’s margins.

As Ackman mentioned, Domino’s trades at a high valuation, with a forward price-earnings ratio of 30. This is quite expensive given the amount of value opportunities in the market currently. 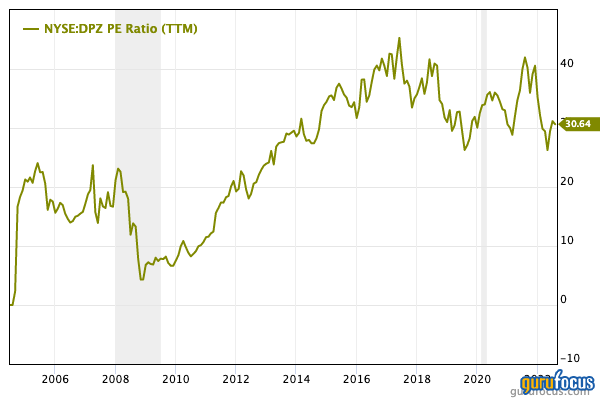 Domino’s Pizza has a strong brand and a mouth-watering product. However, given the correction in demand, high competition and high valuation, it makes sense why Ackman sold. It was interesting to see Ackman praising the management so much, and thus this makes me believe he may be keeping the door open for future investments into the company.