CRMT, Financial) operates 154 used car dealerships in 12 U.S. states and is one of the largest publicly held automotive retailers in the U.S. It focuses exclusively on the "Buy Here/Pay Here" segment of the used car market. The company operates its dealerships primarily in small cities throughout the South and Midwest regions of the U.S. selling quality used vehicles and providing financing for substantially all of its customers.

The company focuses on serving smaller cities with a population of less than 50,000. The average unit sales price is approximately $13,000 to $16,000. The financing contracts offered by the company typically include a down payment in the range of 0% to 20% with term lengths ranging from 18 to 54 months (recent average of 42 months). Customers typically have low credit scores, so interest rates on the contracts average in the mid-teens range. Charge-offs of these internally financed auto loans average around 25%.

America’s Car-Mart currently has a market capitalization of $535 million and generated $1.2 billion in revenues during its last fiscal year. The company is currently a steal in my opinion, as investors do not appear to be taking the company's growth strategy into account. Its goal is to increase growth by improving the productivity of each store. The goal is to sell 40 to 50 vehicles per store per month (the number is at 34 currently). The company also believes it can support 1,000 or more active customers per store, which would be an increase from 629 currently.

Credit metrics deteriorated slightly with net charge offs increasing to 5.6% from 4.3% in the prior-year period. However, these net charge-off results were in line with the prior five-year average and below the prior 10-year average. The average percent of outstanding receivables that are current declined to 80.4% from 84.0%.

The total finance receivables balance stood at $1.19 billion at quarter-end. In accordance with prior charge-off history, the allowance for credit losses on the balance sheet stood at 24.5% at end of the quarter.

Wall Street analyst estimates for the fiscal year ending July 31, 2023 call for earnings per share of $8.60. For the year after, analysts are calling for EPS of $10.56. This puts the company selling at approximately 10 times forward earnings. The current enterprise-value-to-Ebitda ratio is approximately 8.

Assuming an EPS starting point of $8.60 and a growth rate of 8.0% over the next 10 years, the GuruFocus discounted cash flow calculator gives a fair value estimate of $131.00 per share for the stock, which is close to the company’s 52-week high. The GF Value chart rates the stock as a possible value trap because the share price is so far below the GF Value estimate. 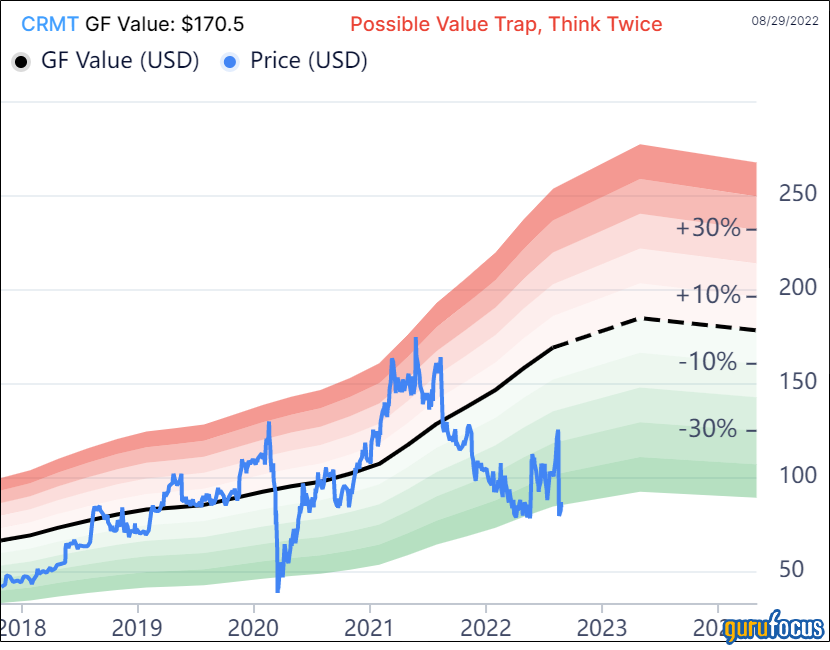 The company does not pay a dividend currently but does frequently repurchase shares.

America’s Car-Mart is facing multiple challenges in its business, but it is possible these headwinds will turn to tailwinds as used car prices normalize to some degree. The company has created a unique, highly personalized business model that should survive bad times and thrive in good times.

“In most cases, competitors in the prime and near-prime auto sales and lending markets do not have the infrastructure to serve our high-touch/high-friction customer base, and competitors in our markets have capital constraints that limit full participation. Historically, our strong cash flows, and the availability and cost of debt financing, have been important competitive advantages for us, and we believe they are even more important advantages in the current environment.”