Sticking to this strategy, the investor revealed in his 13F filing for the three months ended June 30 he established five new positions, exited six stocks and boosted or trimmed a number of other existing investments. Notable transactions included the addition of VMware Inc. (

VMW, Financial), allocating 2.81% of the equity portfolio to the position. During the quarter, the stock traded for an average price of $113.56 per share.

The Palo Alto, California-based cloud computing and virtualization company has a $49.71 billion market cap; its shares were trading around $117.96 on Monday with a price-earnings ratio of 31.71, a price-book ratio of 355.30 and a price-sales ratio of 3.80.

The GF Value Line suggests the stock is modestly undervalued currently based on historical ratios, past financial performance and analysts’ future earnings estimates. 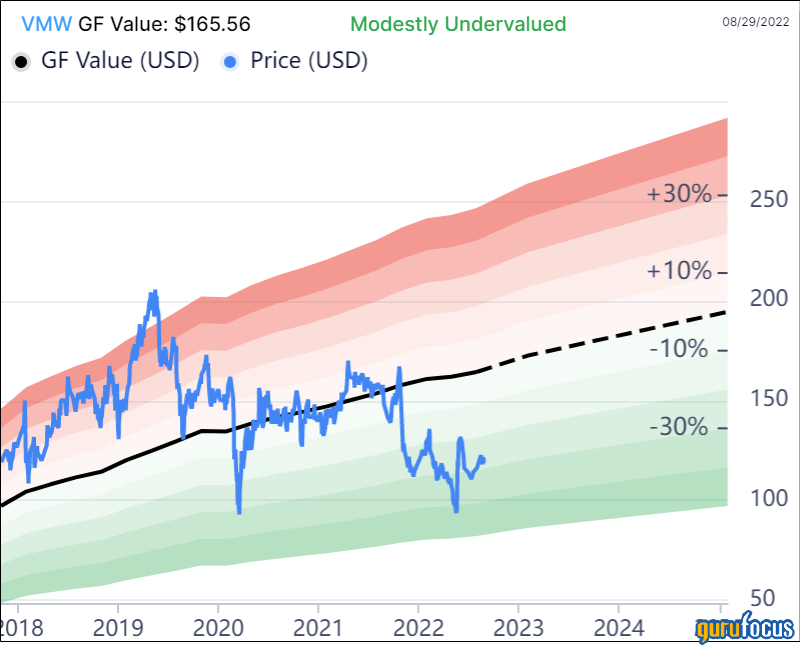 GuruFocus rated VMware’s financial strength 4 out of 10. Although the company has issued new long-term debt over the past several years, it is manageable due to sufficient interest coverage. The Altman Z-Score of 1.70 also warns the company could be at risk of bankruptcy since assets are building up at a faster rate than revenue is growing. The return on invested capital also slightly surpasses the weighted average cost of capital, meaning value is being created as the company grows.

The company’s profitability scored a 9 out of 10 rating. While the operating margin is in decline, VMware is supported by strong returns on equity, assets and capital that outperform a majority of competitors as well as a moderate Piotroski F-Score of 4 out of 9, meaning conditions are typical for a stable company. Despite recording consistent earnings and revenue growth, the predictability rank of five out of five stars is on watch. According to GuruFocus research, companies with this rank return an average of 12.1% annually over a 10-year period.

Of the gurus invested in VMware, Dodge & Cox has the largest stake with 6.65% of its outstanding shares.

The guru increased the Horizon Therapeutics (

Paulson now holds 6.19 million shares total, accounting for 24.38% of the equity portfolio and his largest holding. GuruFocus estimates he has gained 143.08% on the investment so far.

The biopharmaceutical company headquartered in Ireland, which focuses on developing medicines to treat rare and rheumatic diseases, has a market cap of $13.83 billion; its shares were trading around $602.16 on Monday with a price-earnings ratio of 18.53, a price-book ratio of 2.79 and a price-sales ratio of 3.72. 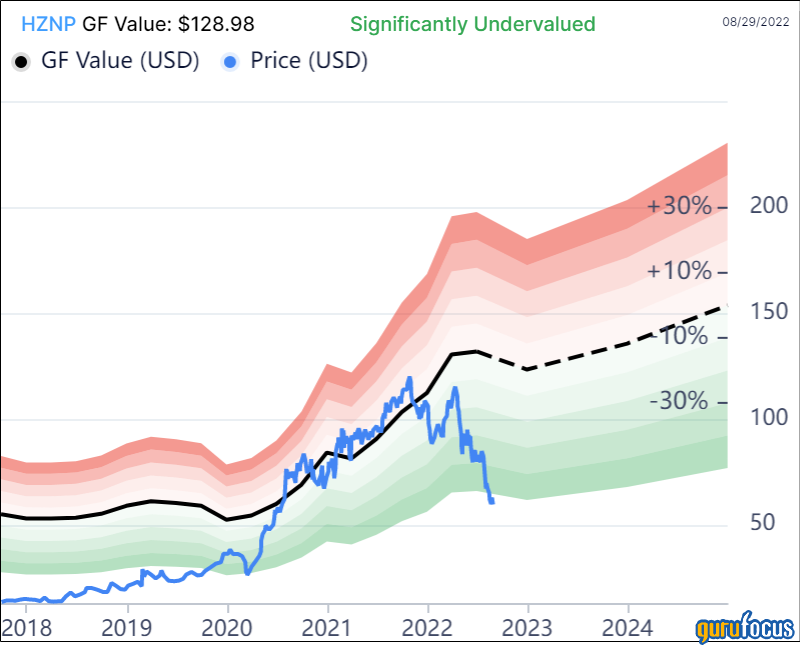 Horizon Therapeutics’ financial strength and profitability were both rated 6 out of 10 by GuruFocus. Despite having a Sloan ratio that is indicative of poor earnings quality, the company is supported by adequate interest coverage and a high Altman Z-Score of 3.32. The ROIC also exceeds the WACC, indicating good value creation.

The company has strong margins and returns that outperform a majority of industry peers. Horizon Therapeutics also has a moderate Piotroski F-Score of 5 and a one-star predictability rank. GuruFocus data shows companies with this rank return an average of 1.1% annually.

With a 2.69% stake, Paulson is now the company’s largest guru shareholder. Other top guru investors of Horizon Therapeutics are Simons’ firm,

GLD, Financial), impacting the equity portfolio by-5.56%. During the quarter, the stock traded for an average per-share price of $174.73.

GuruFocus says Paulson gained an estimated 45.59% on the short-lived investment.

The exchange-traded fund, which tracks the performance of the price of gold bullion, has a $54.85 billion market cap; its shares were trading around $161.88 on Monday.

The stock has fallen over 5% year to date. 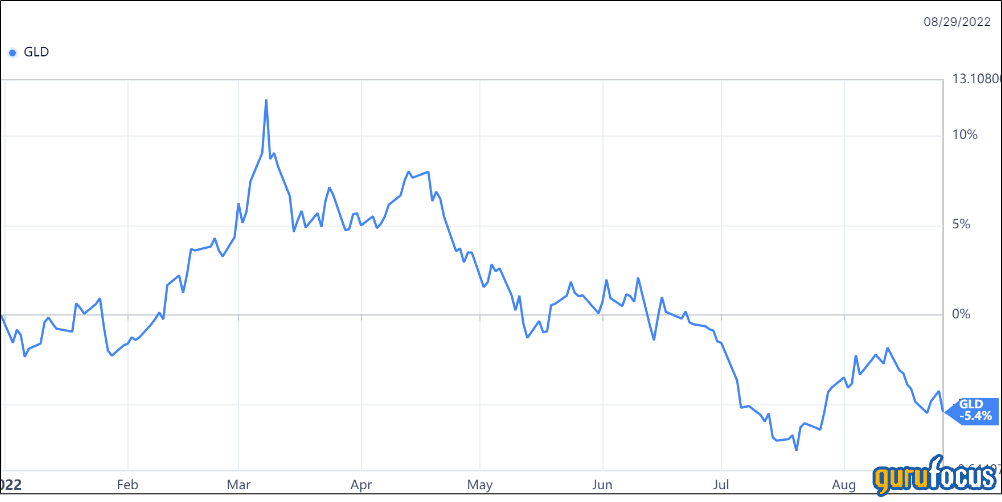 The 14-day relative strength index of 41.31 indicates the stock is neither overbought nor oversold.

Other gurus with positions in the ETF include

DIDIY, Financial), which had an impact of -2.55% on the equity portfolio. The stock traded for an average price of $2.19 per share during the quarter.

GuruFocus data indicates the firm lost an estimated 69.31% on the investment over its lifetime.

The Chinese company, which offers ride-hailing services, has a market cap of $12.67 billion; its shares were trading around $2.60 on Monday with a price-book ratio of 0.75 and a price-sales ratio of 0.18.

The stock has tumbled around 50% year to date.

GuruFocus rated DiDi’s financial strength 6 out of 10 despite having a low Altman Z-Score of 1.32 that warns it could be at risk of bankruptcy.

The company’s profitability did not fare as well, scoring a 2 out of 10 rating on the back of negative margins and returns that are underperforming versus competitors. DiDi also has a moderate Piotroski F-Score of 4.

The guru closed his 1 million-share holding in Exxon Mobil (

XOM, Financial). The transaction had an impact of -2.54% on the equity portfolio. During the quarter, shares traded for an average price of $90.08 each.

GuruFocus found he gained an estimated 1.87% on the investment, which was established in the fourth quarter of 2020. 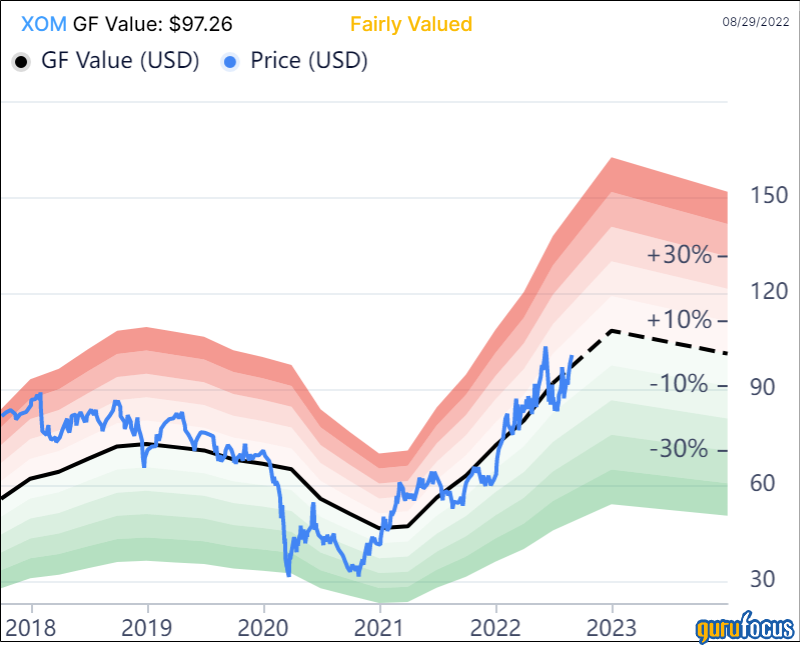 Exxon Mobil’s financial strength was rated 8 out of 10 by GuruFocus. In addition to adequate interest coverage, the Altman Z-Score of 4.39 indicates the company is in good standing. Value is also being created since the ROIC eclipses the WACC.

The company’s profitability scored a 7 out of 10 rating due to strong margins and returns that are outperforming versus industry peers. Exxon Mobil also has a high Piotroski F-Score of 8, indicating operations are healthy, and a one-star predictability rank.

The guru's $2.03 billion equity portfolio, which is composed of32 stocks, is most heavily invested in the health care sector with a weight of 36.52%, followed by the basic materials space with 26.63% exposure.