A look at companies with double-digit total return potential

Trying to identify which stocks have the potential to outperform the market can be a difficult exercise. One way to screen for potential investment opportunities is to consider using GuruFocus’ GF Score. The GF Score takes financial strength, growth, profitability, momentum and value into account to assign each stock a score out of 100.

This article will look at three names that meet the following criteria:

First up is Broadcom Inc. ( 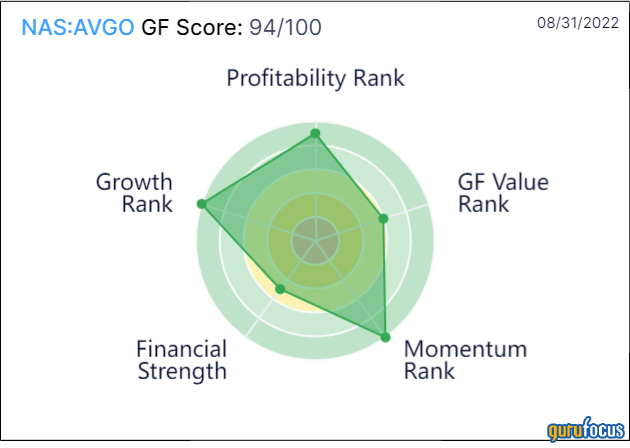 Broadcom has a very high GF Score of 94 out of 100. The company has a 9 out of 10 on profitability, as Broadcom tops its industry group on nearly every metric, including an operating margin of 11.1% that outperforms 95% of peers and a return on capital of 46.7% that is above 98% of the competition. In the last decade, the company has produced profitable results in nine of those years, topping 75% of peers.

The company’s worst showing is on financial strength, where GuruFocus assigns a score of 5 out of 10. This is largely due to weak scores on cash-to-debt, equity-to-asset and debt-to-equity ratios. There are some bright spots as Broadcom’s Piotroski F-Score, which assesses a company’s financial strength, is a 7 out of 9. The company is also seeing a good return on its invested capital. It has a return on invested capital of 16.9%, which compares well to its weighted average cost of capital of 8.4%.

Broadcom has raised its dividend for 11 consecutive years. The dividend is likely to continue to grow as the company has a projected payout ratio of 44% for 2022, which is above the 10-year average payout ratio of 33%, but nearly identical to the five-year payout ratio of 45%. Shares of Broadcom yield 3.3%, more than twice the 1.6% average yield of the S&P 500 Index.

Broadcom is trading below its intrinsic value according to the GF Value chart. 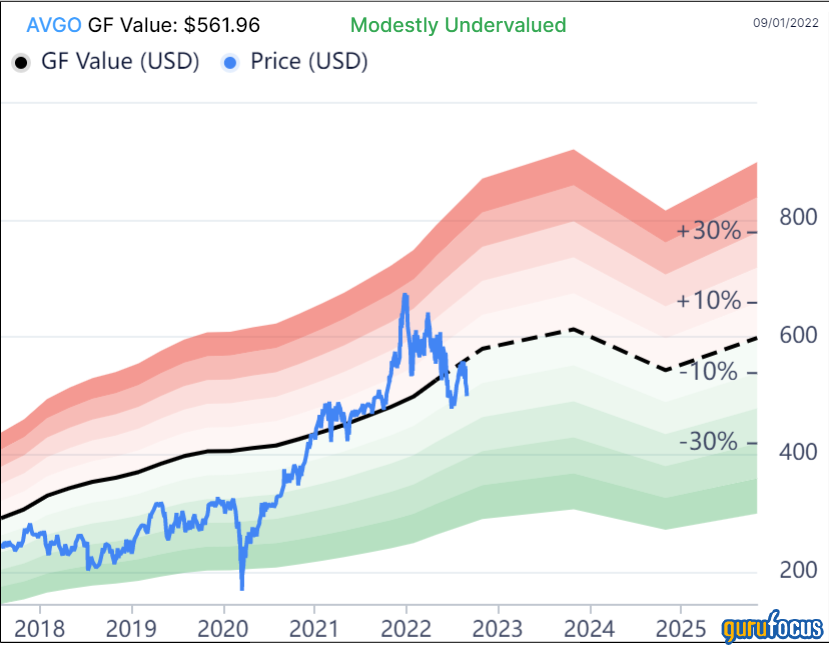 The stock closed Wednesday’s trading session at $499.11. With a GF Value of $561.96, the stock has a price-to-GF Value ratio of 0.89. Broadcom could return 12.6% if it were to reach its GF Value. Including the dividend, total returns could push into the mid-double-digit range. Broadcom is rated as modestly undervalued by GuruFocus.

Next up for discussion is Crown Castle Inc. (

CCI, Financial), a leading real estate investment trust specializing in the owning and operating of cell towers. The trust has in its portfolio more than 40,000 cell towers, the majority of which are leased to leading wireless carriers AT&T Inc. (T, Financial), Verizon Communications Inc. (VZ, Financial) and T-Mobile US Inc. (TMUS, Financial). Crown Castle generates more than $6 billion in annual revenue and trades with a market capitalization of $74 billion. 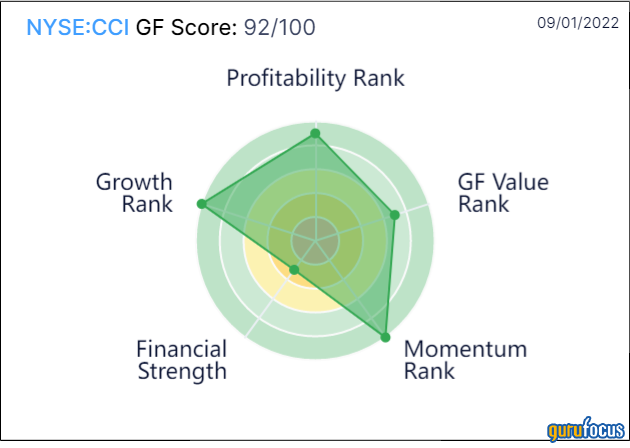 Crown Castle’s GF Score is 92 out of 100. The trust has pretty strong rankings in most areas that determine that score. Growth and momentum are both a perfect 10 out of 10. On growth, Crown Castle’s three-year free cash flow growth rate of 23.5% is ahead of 84% of its peer group while the three-year earnings per share without nonrecurring items growth rate of 29.5% is above three-quarters of the competition. On momentum, the trust’s total return from six months ago compared to one month ago is 8.5%, which is better than 84% of the industry group.

The REIT's weakest area is financial strength, where is scores just a 3 out of 10. The debt-to-equity and equity-to-assets ratios are below more than 93% of those in its industry and are also some of the lowest scores in the last decade of Crown Castle. On the plus side, the trust has a high Piotroski F-score of 8 and its ROIC of 5.8% is above its WACC of 3.9%.

Crown Castle has raised its dividend for seven consecutive years. The projected payout ratio for this year is 76%, which is reasonable for a REIT. For additional context, the average payout ratio since 2017 is 84%. The yield is currently 3.4%. 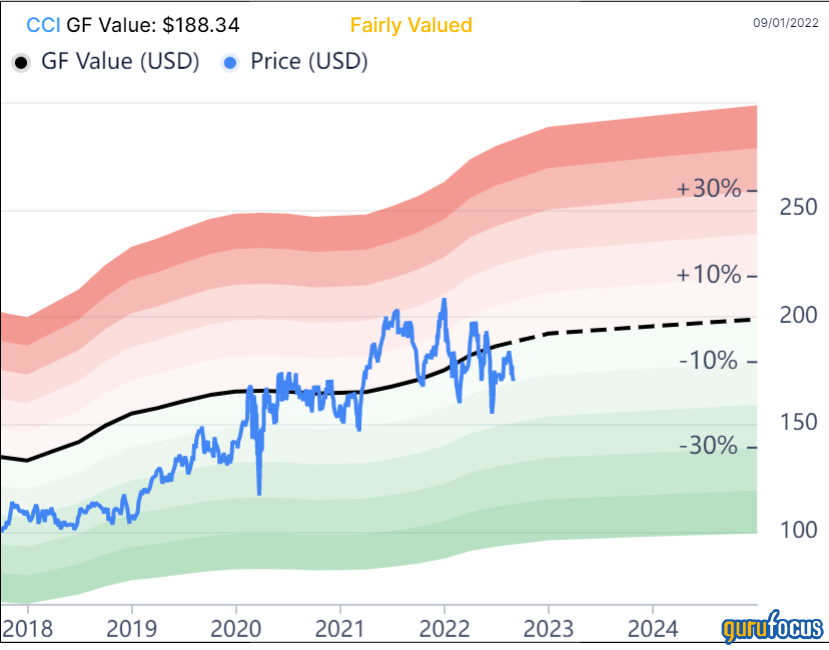 Crown Castle closed on Wednesday at $170.83 and has a GF Value of $188.34, giving the stock a price-to-GF Value ratio of 0.91. The company could return 10.2% before the dividend is factored in. The trust earns a rating of fairly valued.

The final name to discuss is Watsco Inc. (

WSO, Financial), which specializes in heating, ventilation and air conditioning equipment. The company, which has operations in the U.S., Canada and Mexico, sells its products to commercial and residential customers alike. The $10.6 billion company had sales of just over $6 billion in 2021. 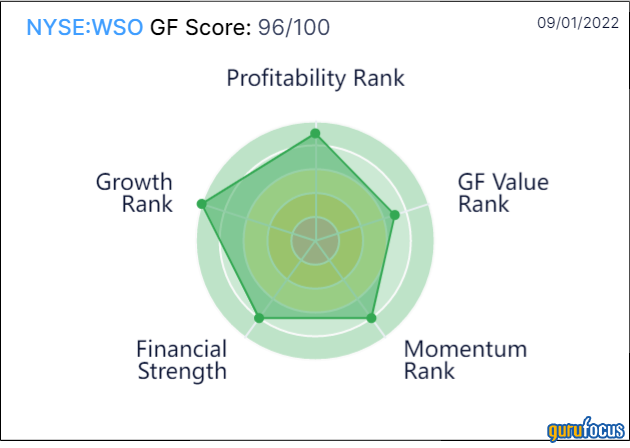 Watsco has a very high GF Score of 96 out of 100. The company receives at least a 7 out of 10 on every metric that composes the ranking. Growth rank is a perfect 10 out of 10, led by three-year revenue growth and future revenue growth of 10.3% and 11.3%, respectively. In both cases, the scores are better than nearly three-quarters of the industry. The profitability rank is a 9 out of 10, with Watsco performing well ahead of its industry and its own historical performance. The ROIC of 25% tops 92% of peers and is the company’s best showing in the last decade.

Watsco has a dividend growth streak of nine years, which is likely to continue as the expected payout ratio for this year is 60%. This is below the 10-year average payout ratio of 72% and would be the lowest since 2015 if achieved. The stock yields 3.2%.

Shares look to have the highest upside potential of the three names discussed. 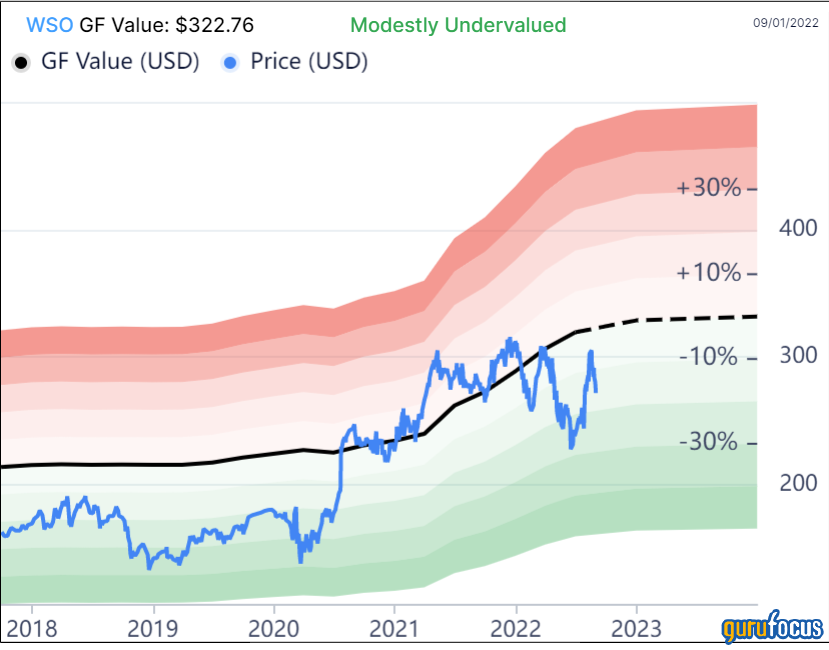 Watsco trades at $273.54. The GF Value is estimated at $322.76, resulting in a price-to-GF Value ratio of 0.85. If the stock were to reach its GF Value, shareholders would see a 18% return in the share price. The dividend could push total returns across the 20% threshold. Watsco is rated as modestly undervalued.

The GF Score takes multiple factors into account when ranking stocks. With higher-scoring stocks often outperforming those with lower scores, investors can use the ranking system to develop a watchlist of potential investments.

Broadcom, Crown Castle and Watsco are three stocks that have GF Scores in the 90s. They all are trading at a discount to intrinsic value of at least 10% and each stock has a dividend yield that is twice that of the S&P 500 Index average.

For investors looking for value and yield, each stock could be a solid addition to their portfolio.