A Pair of Undervalued Stocks Crushing the S&P 500 Index

The companies outperforming the market index could provide double-digit returns

The S&P 500 Index has lost nearly 18% year to date as the markets continue to trend lower. Interest rate hikes, high inflation, supply chain constraints, Covid-19 restrictions, the Russian invasion of Ukraine and other issues have all helped to cause uncertainty in the market, causing the major indexes to drop.

The good news is that while the market itself has been a difficult place to invest, individual stocks can hold up much better. Even better, some of these names are still undervalued relative to their intrinsic value while offering a market-beating dividend yield.

I will examine two names that meet the following criteria:

The first name up for discussion is DTE Energy Co. (

DTE, Financial), a holding company for DTE Electric. The Michigan-based company has a market capitalization approaching $26 billion and generated $15.4 billion in revenue last year. The company has outperformed the S&P 500 Index by 28% year to date.

DTE Energy operates primarily in the sate of Michigan. This does not provide much in the way of geographic diversification, but the company does have more than 2 million electric and more than 1 million gas customers. Sources of revenue are slightly more diversified, with half coming from residential customers, a third from commercial and the remainder from industrial and other types of customers.

DTE Energy has plans to make heavy investment in its infrastructure that then can be recouped through rate increases. Currently, the investment plan calls for as much as $40 billion over the next 10 years.

A good example of this is the company’s 2019 agreements with Ford Motor Co. (

The steady regulated business aided by the drive for renewable energy should help DTE Energy continue to raise its dividend, something the company has done for 13 consecutive years. Shares yield 2.7%, more than a full percentage point better than the average yield of 1.6% for the S&P 500 Index. The dividend looks very safe as well, with a projected payout ratio of 59% for the year that matches the average for the last decade.

The stock is trading at a discount to its intrinsic value according to the GF Value chart. 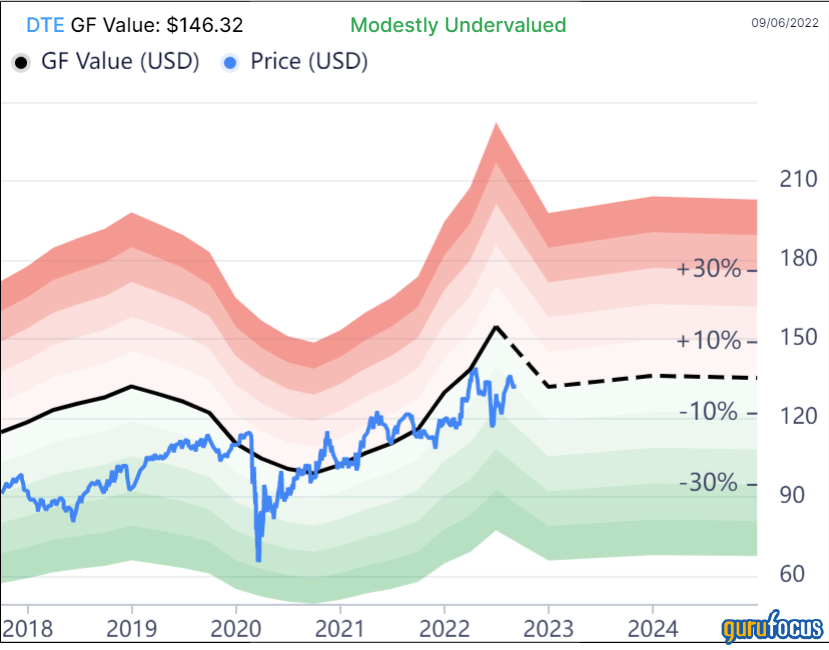 With the stock trading at close to $131 and a GF Value of $146.32, DTE Energy has a price-to-GF Value ratio of 0.90. Reaching the GF Value would mean a return of 11.7% from current levels. DTE Energy is rated as modestly undervalued by GuruFocus.

The second name for consideration is Merck & Co. Inc. (

MRK, Financial), a leading global health care company. Merck is valued at $219 billion and produced revenue of $50 billion in 2021. The company's stock has outperformed the market by 31% for the year.

Any discussion of Merck usually starts with Keytruda, which is used to treat a variety of cancers, such as melanoma, non-small cell lung cancer, cervical cancer and classical Hodgkin lymphoma, among others.

The wide variety of cancers that can be treated with Keytruda, either by itself or in combination with other medicines, has led to high levels of demand. Keytruda generated revenue of more than $17 billion last year, which was a 20% increase from 2020 figures. The drug should cross the $20 billion mark this year and could reach peak sales of in the mid-$20 billion range.

Keytruda is patent protected through at least the end of this decade in most markets, including through 2028 in the U.S., through 2030 in the European Union and through 2032 in Japan. Merck has several years before the drug hits the patent cliff, which should provide for strong results in the years ahead.

Merck has more in its portfolio than just Keytruda, though. These include its HPV vaccine Gardasil and its diabetes treatment Januvia/Janumet, which had sales of $5.7 billion and $5.3 billion last year. The company’s Animal Health segment has proven adapt at growing at a fairly high rate, including a double-digit improvement to $5.6 billion in 2021.

Merck has shown the ability to quickly bring new products to market. Take, for example, Lagevrio, which treats mild to moderate Covid-19 in adults. The antiviral has produced more than $4 billion of revenue in the first half of 2022. The contribution from Lagevrio was cut in half in the second quarter, but is representative of Merck’s ability to find new products that can be used to meet the health care needs. The company has numerous products in late-stage studies for use of treatment in a number of areas, including oncology, infectious disease, neuroscience, cardiovascular and vaccines.

Despite the positive tailwinds, Merck trades below its GF Value. 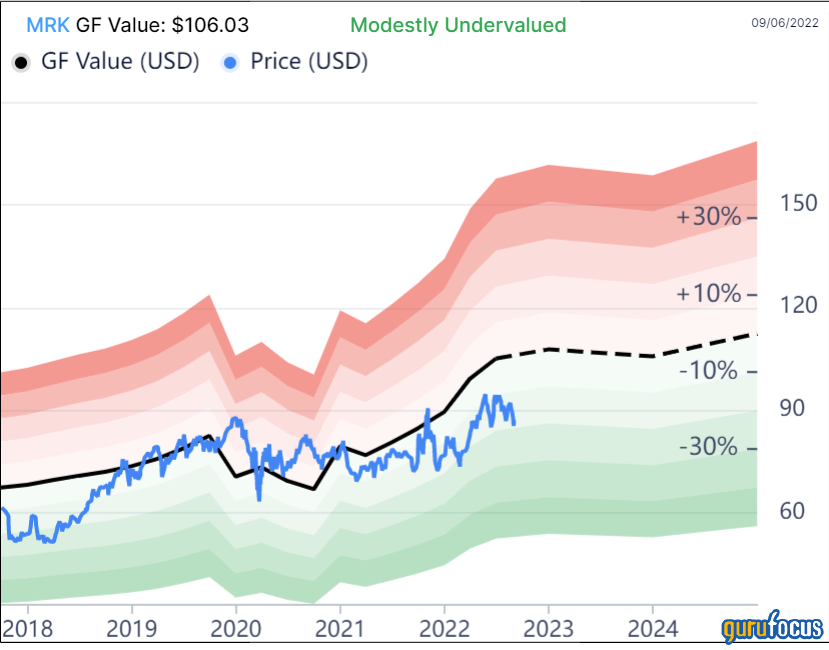 Currently trading at close to $86, Merck has a GF Value of $106.03, giving the stock a price-to-GF Value ratio of 0.81. The company could return 23.3% if it were to reach its GF Value, earning the stock a rating of modestly undervalued.

The S&P 500 Index has had an extremely difficult year, but DTE Energy and Merck are two examples of companies running well ahead of the market. Both names have business models that should provide cover for solid, growing dividends. Both stocks are also trading at a double-digit discount to their respective GF Values.