Activist investor reached an agreement with the company in May

After boosting the stake in Southwest Gas Holdings Inc. (

The guru’s Florida-based firm, Icahn Capital Management, is known for taking activist positions in struggling companies and working with management to improve profitability as well as unlock value for shareholders.

According to GuruFocus Real-Time Picks, a Premium feature based on 13D, 13G and Form 4 filings, Icahn invested in another 672,666 shares of the Las Vegas-based utility company on Sept. 2. The stock traded for an average price of $80.33 per share on the day of the transaction.

His firm now holds 6.47 million shares total, which account for 2.49% of the equity portfolio. GuruFocus estimates Icahn has gained 5% on the investment since establishing it in the third quarter of 2021. The 13F filing for the three months ended June 30 also showed it was his eighth-largest holding.

The company, which provides natural gas services to over 2 million customers in Arizona, Nevada and California, has a $5.42 billion market cap; its shares were trading around $81.17 on Thursday with a price-earnings ratio of 33.18, a price-book ratio of 1.56 and a price-sales ratio of 1.15.

The GF Value Line suggests the stock is fairly valued currently based on its historical ratios, past financial performance and analysts’ future earnings estimates. 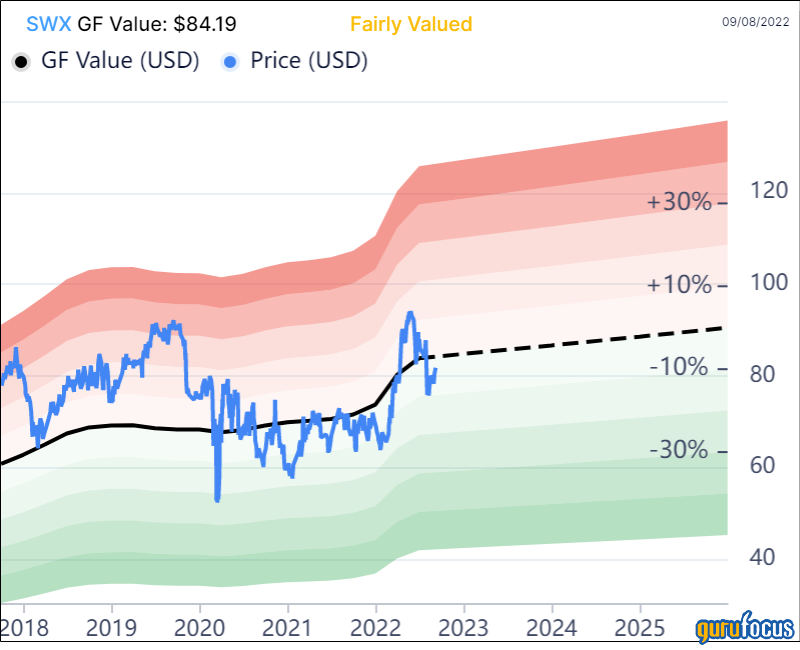 The GF Score of 74 out of 100 indicates the company is likely to have average performance going forward. Southwest Gas received high points for profitability and growth, middling marks for GF Value and low grades for financial strength and momentum. 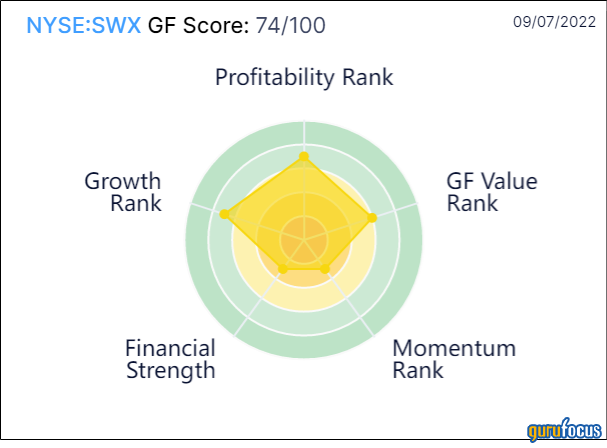 The corporate raider first took issue with the company when it announced its plans to acquire Questar Pipelines in October of 2021. He sent an open letter to the board of directors in protest of the $2 billion deal, arguing that it was paying too much for the company and that it would ultimately hurt shareholders. Icahn also attacked Southwest Gas’ executive panel for “poor governance” and “egregious errors.”

Despite his objections, the Questar deal was completed in December.

That was not the end of the matter, however. After a months-long battle where Icahn issued a tender offer and called for the ousting of President and CEO John Hester as well as the replacement of 10 directors, Southwest Gas finally reached an agreement with him in May.

In addition to removing Hester from his leadership role, the company gave the investor three board seats. Karen Haller was selected to replace Hester as chief executive.

In August, Icahn received a fourth board seat after Southwest failed to spin off infrastructure services business Centuri Group Inc., though it plans to continue looking at strategic options for the unit.

Southwest Gas reported its second-quarter financial results on Aug. 9. The company posted a consolidated net loss of $6.6 million, or a loss of 10 cents per share, on $1.15 billion in revenue, which was an improvement from the prior-year quarter. 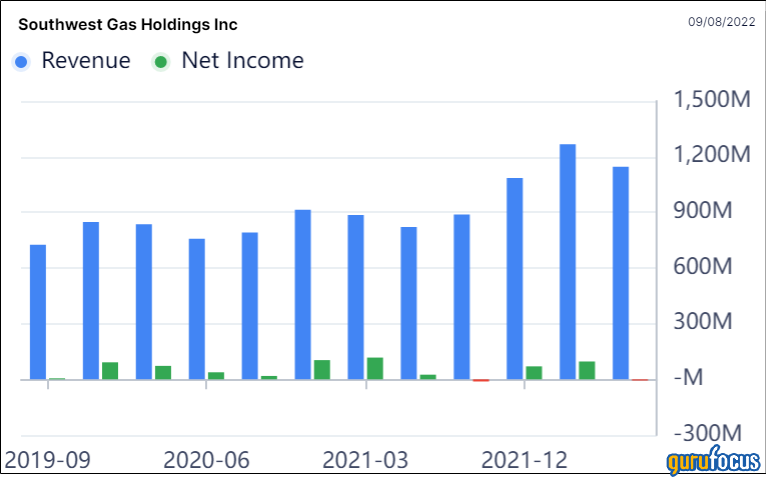 On an adjusted basis, it recorded earnings of 23 cents per share.

In a statement, Haller noted the company is “fundamentally strong and poised for long-term value creation.”

“Our second-quarter results were very much in-line with our expectations when you exclude certain event-driven expenses at the utility that we do not believe will continue through the remainder of the year and the impact of global supply chain and inflationary headwinds across our infrastructure services portfolio," she said. “By optimizing the utility, we are confident that we can improve financial performance and generate significant value."

GuruFocus rated Southwest Gas’ financial strength 3 out of 10. As a result of the company issuing new long-term debt over the past several years, it has weak interest coverage. The low Altman Z-Score of 0.84 also warns it could be at risk of bankruptcy since assets are building up at a faster rate than revenue is growing. The return on invested capital is overshadowed by the weighted average cost of capital, meaning the company is struggling to create value as it grows.

The company’s profitability fared better, scoring a 7 out of 10 rating even though its margins are declining and returns on equity, assets and capital are underperforming over half of its competitors. Southwest Gas also has a moderate Piotroski F-Score of 4 out of 9, indicating conditions are typical for a stable company. Despite having consistent earnings and revenue growth, the predictability rank of three out of five stars is on watch. According to GuruFocus research, companies with this rank return an average of 8.2% annually over a 10-year period.

Icahn is by far the company’s largest guru shareholder with a 9.67% stake.

Over 65% of Icahn’s $20.86 billion equity portfolio, which 13F filings show was composed of 16 stocks as of June 30, was invested in the industrials sector. Energy had the second-largest representation with a weight of 18.09%.

At the end of the quarter, the investor’s largest holdings were Icahn Enterprises LP (