Margaret Moran
Sep 08, 2022
Bookmark
Summary
Joel Greenblatt (Trades, Portfolio) introduced the investing world to the “Magic Formula” when he published his bestselling book, “The Little Book That Beats the Market,” in 2005. The idea behind the Magic Formula is to apply a simple mathematical formula to find profitable businesses that trade at bargain prices.

The formula ranks companies primarily based on two metrics: earnings yield and return on capital. Greenblatt defines the earnings yield as earnings before interest and taxes (Ebit) divided by enterprise value; this metric measures how much the company earns compared to how much the stock is valued by the market. The return on capital, meanwhile, is calculated as Ebit divided by the sum of net fixed assets and net working capital and measures how much a company earns compared to what it spends to produce those earnings.

One way that investors can search for stocks based on Greenblatt’s Magic Formula is through the GuruFocus Magic Formula Screener. However, GuruFocus users can also select Greenblatt’s earnings yield and return on capital as criteria in the All-in-One Screener for more customized screening.

Using the All-in-One Screener, I screened for stocks with high earnings yields and returns on capital that have GuruFocus financial strength and profitability ratings of at least 6 out of 10 and are also trading at a discount to fair value based on the Peter Lynch chart. In other words, despite being extremely profitable, these stocks may have been overlooked by the market.

While some may deserve low valuations, there were three names on the list that caught my attention with exceptional growth rates and solid outlooks: Vista Outdoor Inc. (

VSTO, Financial), an American designer and manufacturer of outdoors sports and recreation products, has an earnings yield of 29.73%, ranking higher than 96% of peers in the travel and leisure industry, and a return on capital of 74.05%, which is better than 89% of peers. At a share price of $28.59 as of this writing, the stock trades below both the Peter Lynch earnings line and the median historical valuation line. 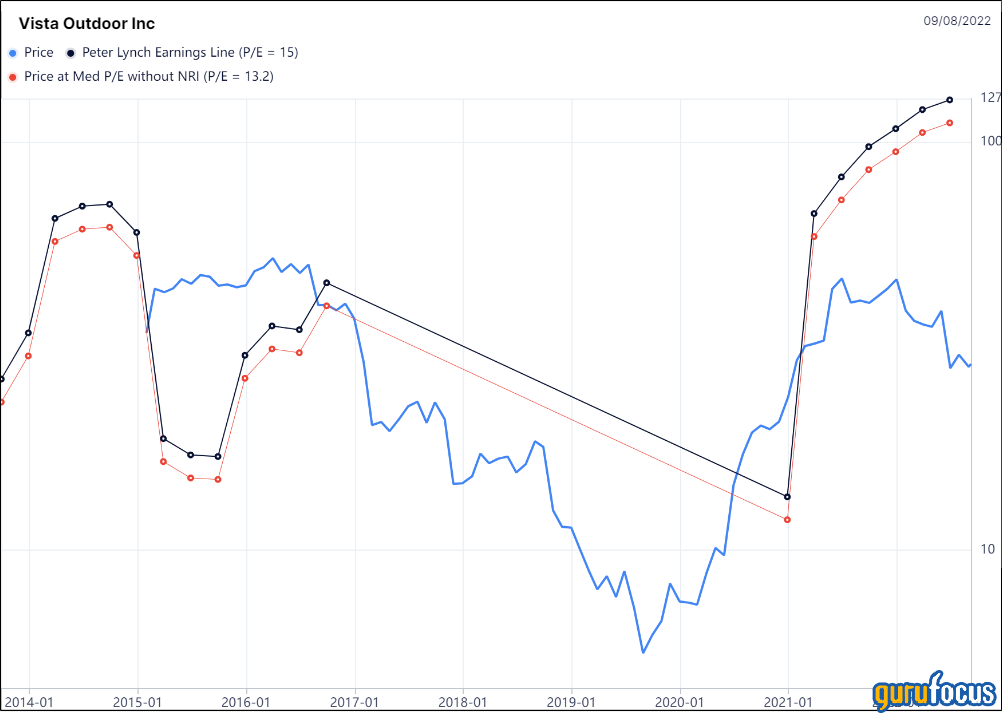 The company trades at a price-earnings ratio of 3.42 and a price-book ratio of 1.30. It has achieved a three-year revenue per share growth rate of 12.9%, and the bottom line has turned from a loss per share of $11.27 in full fiscal 2019 (the company’s fiscal year ends March 31) to earnings per share without non-recurring items of $8 in full fiscal 2022.

Vista is a turnaround story. In 2015, the company was on a growth track and traded at premium valuation multiples, but a couple of failed acquisitions hurt growth plans, and the brand tax associated with owning gun-making companies (especially semi-automatic rifle producers) caused many retailers and customers to boycott the rest of Vista’s products in light of the increasing frequency of school shootings.

It took two major changes to revive Vista’s business: selling off its firearms business (though the company still sells ammunition) and creating a direct-to-consumer channel. It also sold off other underperforming business such as the eyewear segment. These changes helped to get rid of gun-related aversion of the business and improve margins.

Even as earnings have reached new all-time highs, Vista’s valuation has remained depressed, which is part of the reason why the company announced plans this past May to divide itself into two separate companies. One business will consist of the outdoor products segment, while the other will consist of the sporting products segment. The separation is expected to be completed in calendar 2023. Vista hopes the fresh start will create value for shareholders and help each segment make better capital allocation decisions.

ATKR, Financial), a manufacturer of various metal and electrical products, has an earnings yield of 29.94%, which is higher than 94% of peers in the industrial products industry, and a return on capital of 142.07%, which outperforms 98% of peers. As of Thursday, shares traded around $84.67 apiece. According to the Peter Lynch chart, the stock is trading below both its fair value and its median historical valuation. 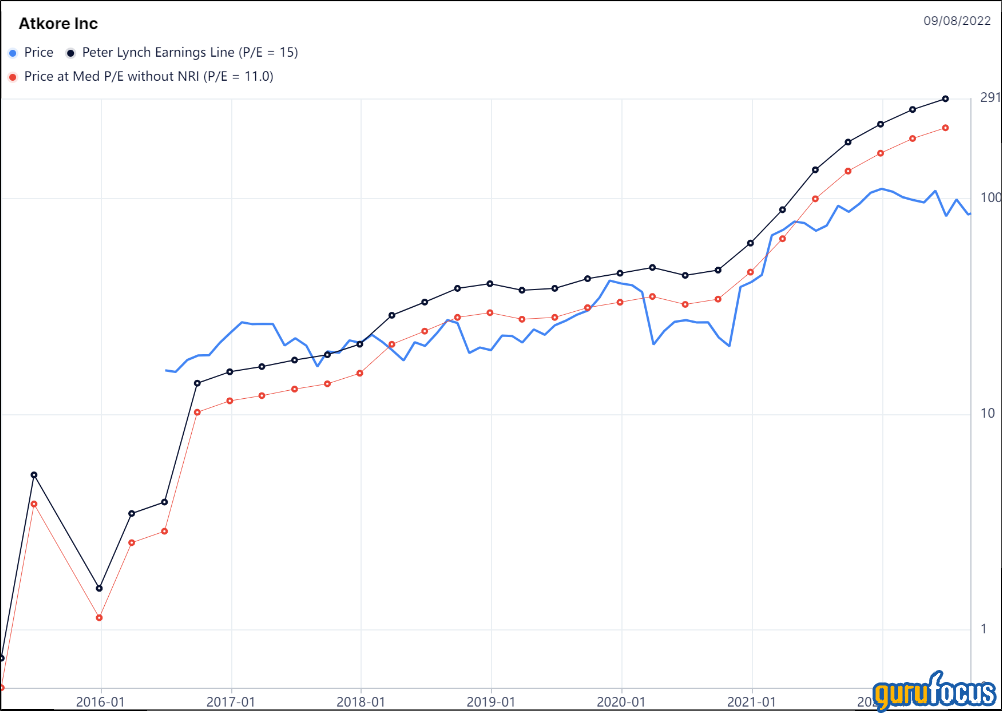 While Atkore’s fortunes took a dramatic turn for the better midway through 2020, the timing with the Covid-19 pandemic was coincidental; this is no pandemic stock that we can expect to soon lose its business boost. Atkore supplies products such as cables, conduits, PVC pipes, metal tubing, razor wire, strut and safety products.

Atkore’s business has boomed primarily due to the rapidly rising demand for electrical and safety systems. The transition to clean energy will require a massive buildout of electrical infrastructure. Additionally, some developed countries (most notably Atkore’s home market in the U.S.) are seeing parts of their electrical grids begin to fail as they reach the end of their operational lifetimes, and they will need to be built back stronger to support the higher electricity loads from greater population density and electric vehicles.

Atkore is in a prime position to benefit from industry growth because it is well known for quality, with many of its products holding the number one or two spot in the market. It is tough to build an economic moat in the industrial products industry, as in many cases buyers simply choose what is available or fits within the budget, but Atkore manages as well as it can thangs to economies of scale and high-quality products.

KLIC, Financial) has an earnings yield of 32.54%, beating 94% of peers in the semiconductors industry, while its return on capital is 135.37%, outperforming 92% of peers. Shares traded around $43.53 on Sept. 8. The stock is undervalued based on the Peter Lynch chart. 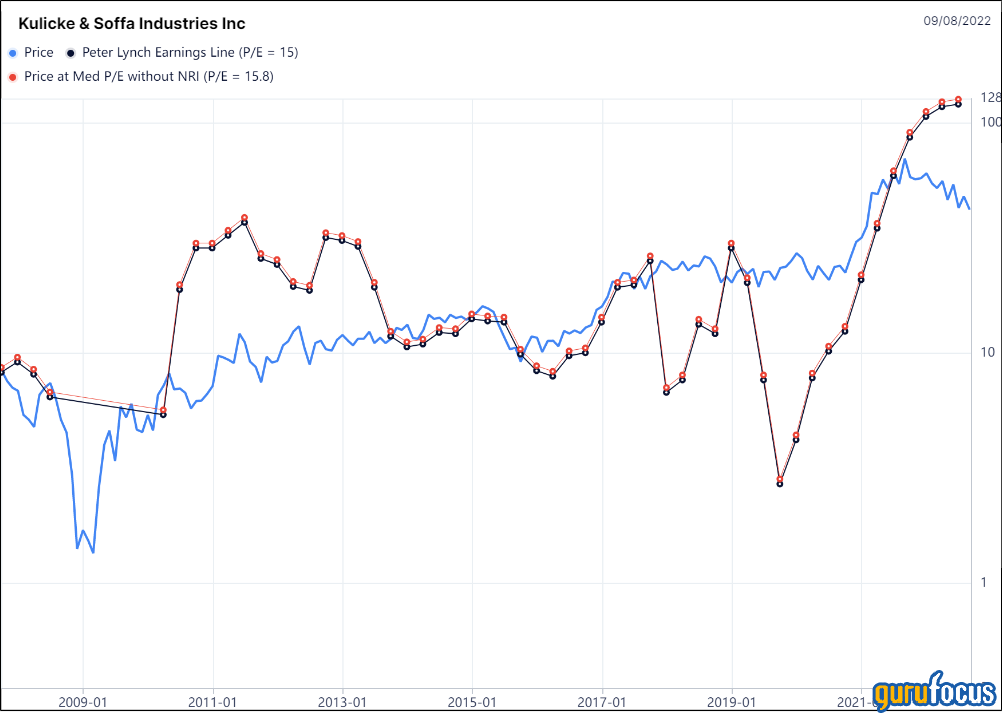 With the global demand for semiconductors rapidly increasing, Kulicke & Soffa has been a key beneficiary of industry expansion as a “pick and shovel” play. Regardless of whether semiconductor producers do well, a pick and shovel play will profit when the industry it serves is building out additional production capacity.

Some investors are worried the semiconductor industry is setting itself up for an oversupply crisis by building out too much capacity. The cyclical status of semiconductor companies is often forgotten because of the tech label, and it does indeed seem likely that rapidly building up capacity to meet demand could result in a supply glut once demand wanes. On the other hand, thanks to Kulicke & Soffa’s fortress-like balance sheet with a GuruFocus financial strength rating of 10 out of 10, the company anticipates being able to go on an acquisition spree as share prices decline.