Brandes Investment, the firm founded by

Following Benjamin Graham’s value investing style, the San Diego-based investment firm takes positions in out-of-favor securities that have attractive total return potential and holds them until the market recognizes their true worth.

According to GuruFocus Real-Time Picks, a Premium feature based on 13D, 13G and Form 4 filings, the firm invested in 63,112 shares of the Batavia, New York-based industrial products manufacturer on Aug. 31, which had an impact of 0.01% on the equity portfolio. The stock traded for an average price of $9.83 per share on the day of the transaction.

It now holds 1.07 million shares total, accounting for 0.25% of the equity portfolio. GuruFocus data shows the firm has lost an estimated 19.30% on the investment since establishing it in the first quarter of 2020.

The company, which manufactures vacuum and heat transfer equipment for the defense, space, energy and process industries, has a $105.01 million market cap; its shares were trading around $9.89 on Monday with a forward price-earnings ratio of 124.07, a price-book ratio of 1.08 and a price-sales ratio of 0.76.

The GF Value Line suggests the stock is significantly undervalued currently based on historical ratios, past financial performance and analysts’ future earnings projections. 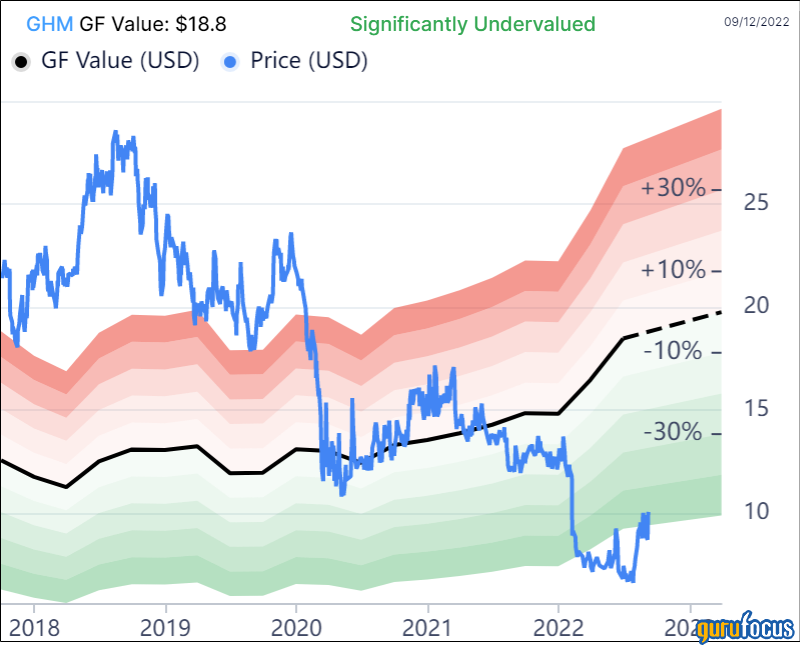 The GF Score of 70 out of 100, however, indicates the company has poor performance potential. While Graham received high points for profitability, its financial strength, GF Value and momentum garnered middling marks and its growth got a low grade. 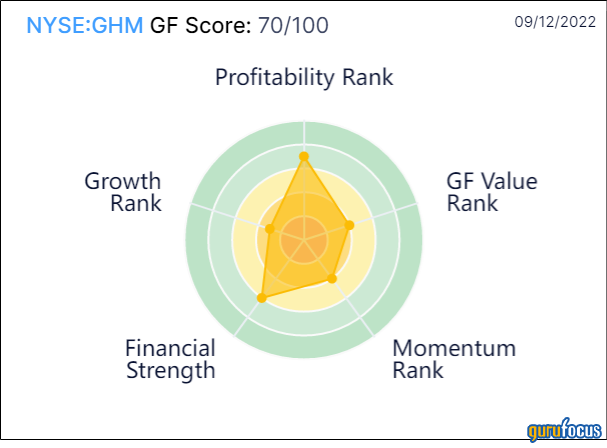 Graham reported its financial results for the first quarter of fiscal 2023 on July 29. For the three months ended June 30, revenue grew 79% from the prior-year quarter to $36.1 million. The company posted adjusted net income of $1.3 million, or 12 cents per share, which improved from a loss of 28 cents a year ago. 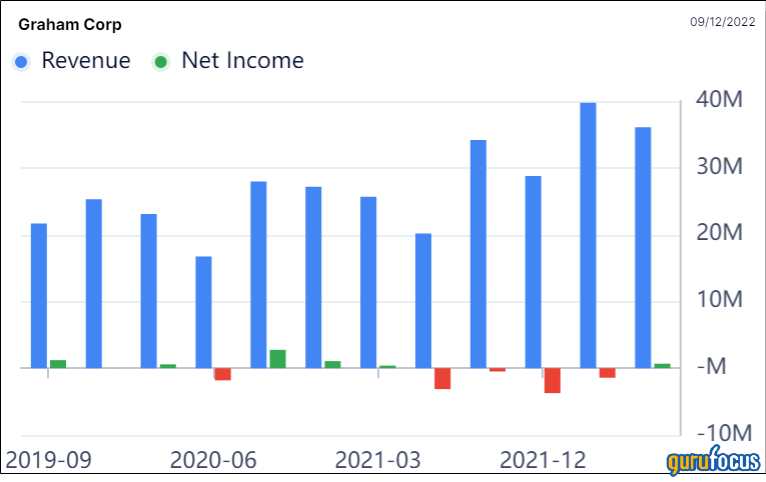 In a statement, President and CEO Daniel Thoren praised the company’s improved performance as it “navigated supply chain challenges and actively managed costs.”

“The breadth of our sales and order mix further validates the changes we have made to enable a more sustainable enterprise with expanded opportunity,” he said. “Our improved profitability was the result of the deliberate decisions we are making as a team to defer costs, manage project timing to improve mix, and take price where earned.”

GuruFocus rated Graham’s financial strength 6 out of 10. The Altman Z-Score of 2.15 cautions the company is under some pressure since assets are building up at a faster rate than revenue is growing. Further, the Sloan ratio is indicative of poor earnings quality.

The company’s profitability scored a 7 out of 10 rating despite having a declining gross margin and negative returns on equity, assets and capital that are underperforming versus competitors. Its moderate Piotroski F-Score of 4 out of 9 means conditions are typical for a stable company. Graham’s predictability rank of one out of five stars is also on watch. GuruFocus research found companies with this rank return an average of 1.1% annually over a 10-year period.

Of the gurus invested in Graham, Brandes has the largest stake with 10.16% of its outstanding shares.

The firm’s 13F filing shows other industrial products stocks it holds as of the second quarter include Emerson Electric Co. (

Brandes’ $4.09 billion equity portfolio, which was composed of 164 stocks as of June 30, is most heavily invested in the health care and financial services sectors.