REITs are known for defending against inflation; here are three hedge fund favorites

Real estate investment trusts, or REITs, are well known for protecting portfolios against inflation. The income for these companies comes from renting out the properties they own, and historically, rents have risen faster than wages since 1980 at an average of 8.86% per year, according to data compiled by iPropertyManagement.

It is also very rare for rents to decrease, even when the economy is experiencing a recession. Take Realty Income Corp. (

O, Financial), for example; in the financial crisis, even as real estate prices plummeted on the wave of foreclosures, the company’s top and bottom lines only showed small declines that it recovered from in just a couple of years. 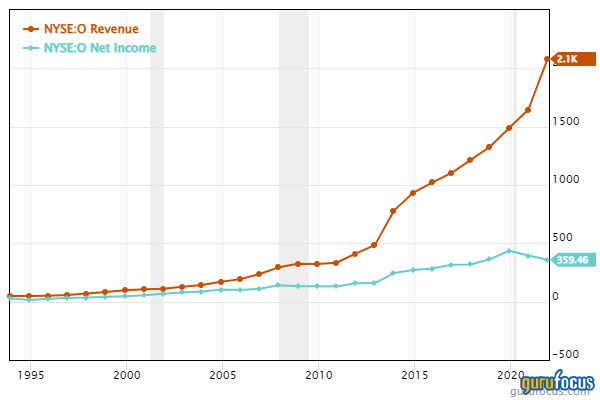 In addition to being a strong defense against inflation, REITs have to pay out 90% of their taxable income to shareholders, so their dividend yields tend to be attractive.

The data on guru trades comes primarily from quarterly 13F filings with the SEC. Investors should be aware that 13F reports do not provide a complete picture of a guru’s holdings. They include only a snapshot of long equity positions in U.S.-listed stocks and American depository receipts as of the quarter’s end. They do not include short positions, non-ADR international holdings or other types of securities. However, even this limited filing can provide valuable information.

There were seven gurus buying shares of Crown Castle Inc. (

Gurus have been net buyers of the stock for the past four quarters, as shown in the chart below:

Based in Houston, Crown Castle is the largest owner of shared communications infrastructure in the U.S., with over 40,000 cell towers and close to 80,000 route miles of fiber supporting small cells and fiber solutions.

Growing global demand for wireless data is the main catalyst for this stock’s growth. It has already achieved a compound annual growth rate of 13% since its initial public offering in 1998 with dividends reinvested, and while the ownership of shared communications infrastructure in the U.S. may be near market saturation, the increasing utilization of said infrastructure is also a factor to consider.

The dividend yield of 3.37% is low compared to the average of the REIT sector, due in part to the high price-to-funds from operation ratio of 22.71. This stock tends to stay expensive because investors know it is extremely reliable. It leases its infrastructure out to major telecommunications companies on contracts that typically have an initial term of 10 years and come with automatic annual price increases.

Gurus have been net buyers of the stock for the past three quarters:

Equinix is a digital infrastructure REIT that owns internet connection and data centers. Headquartered in Redwood City, California, it is the leader in the global colocation data center market with 240 data centers in 27 countries on five continents.

This stock is not one to buy for the income with a dividend yield of just 1.90%. It is also fairly expensive with a price-to-FFO ratio of 24.88. The three-year dividend growth rate is 8%, however, so at least the company is raising its payments to shareholders, though it is simultaneously issuing more shares than it is buying back, as shown by the three-year share buyback ratio of -3.90%.

However, what Equinix lacks in dividends, it is making up for in growth. Its three-year free cash flow per share growth rate is 13.60%, and the company recently reported its 77th consecutive quarter of revenue growth. As global demand for digital infrastructure continues to rise, Equinix stands to reap the benefits of being able to own and lease more data centers at higher rates.

Gurus have been mostly bullish on the stock for the past couple of years:

Simon Property Group is a REIT focusing on shopping malls, outlets and other community commerce centers. It is the largest such REIT in the U.S. with 94 malls, 69 outlets, 14 mills, six lifestyle centers and 15 other retail properties in the U.S. and Puerto Rico.

With worries of a potential recession on the horizon, investors have been selling off Simon Property Group again, lowering its price-to-FFO ratio to 9.55 and resulting in a high dividend yield of 6.69%. The company’s growth has also stagnated in recent years, providing another reason for the lack of market confidence.

However, it is notable that the company continued paying and even raising its dividend during the financial crisis. Even if short-term troubles appear, the company has a history of continuing dividend payments and eventually achieving a recovery. Simon Property Group also sees further growth opportunities via joint ventures, international markets and redeveloping shopping centers to attract more customers.