Some of the guru's picks are on sale

As the end of the third quarter approaches, a handful of

While the market continues to contend with rising inflation and potential interest rate hikes, several stocks in the guru’s Berkshire Hathaway ( 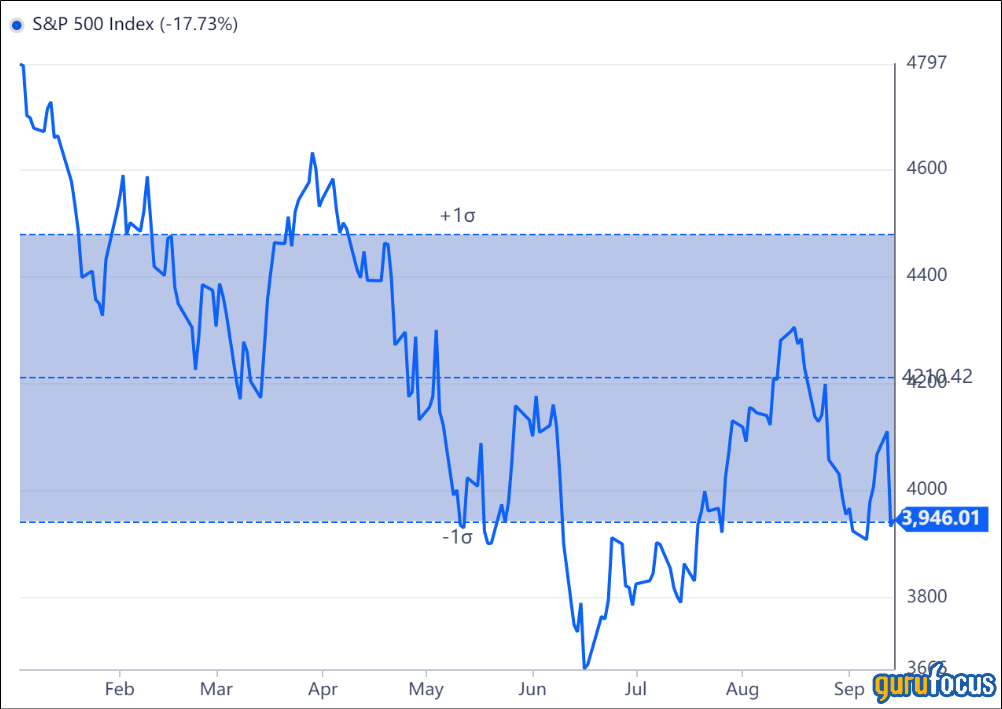 While Buffett, whom many regard as one of the greatest investors of all time, mostly sat on his hands in the months following the coronavirus crash despite the plethora of available value opportunities, he has been a more active buyer in recent months, having established large stakes in Occidental Petroleum Corp. (

Regarding price, the billionaire investor seeks a margin of safety between a company’s share price and its intrinsic value. Additionally, he advocates for buying “wonderful” companies at “fair” prices instead of fair companies at wonderful prices. Buffett also tends to favor high-quality companies that he understands and have strong moats.

The second-quarter 13F filing showed his equity portfolio consisted of 47 stocks as of the three months ended June 30, which was valued at $300.13 billion. Buffett’s holdings have posted mixed performances so far in 2022, with 14 of the top 20 positions declining.

As of Thursday, some of Buffett’s stocks that have collapsed to near their lowest prices in a year included Charter Communications Inc. ( 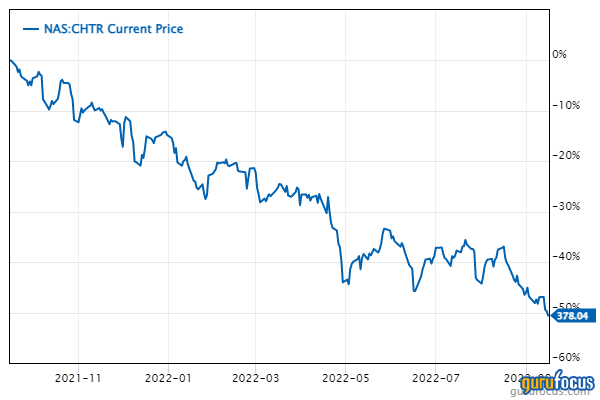 The Oracle of Omaha owns 3.83 million shares of the company, which represents 0.60% of his equity portfolio.

The Stanford, Connecticut-based telecommunications and mass media company has a $60.87 billion market cap; its shares were trading around $378.04 on Thursday with a price-earnings ratio of 12.17, a price-book ratio of 6.15 and a price-sales ratio of 1.26.

GuruFocus rated Charter Communications’ financial strength 3 out of 10. Due to issuing new long-term debt over the past several years, the company has weak interest coverage. The Altman Z-Score of 0.77 also warns it could be in danger of bankruptcy. The return on invested capital, however, overshadows the weighted average cost of capital, meaning value is being created as the company grows.

The company’s profitability fared better with an 8 out of 10 rating, driven by operating margin expansion, strong returns on equity, assets and capital that outperform over half of its competitors and a high Piotroski F-Score of 7 out of 9, indicating business conditions are healthy. Charter Communications also has a predictability rank of four out of five stars on the back of consistent earnings and revenue growth. According to GuruFocus research, companies with this rank return an average of 9.8% annually over a 10-year period.

Of the gurus invested in the stock, Dodge & Cox has the largest stake with 4.21% of its outstanding shares. 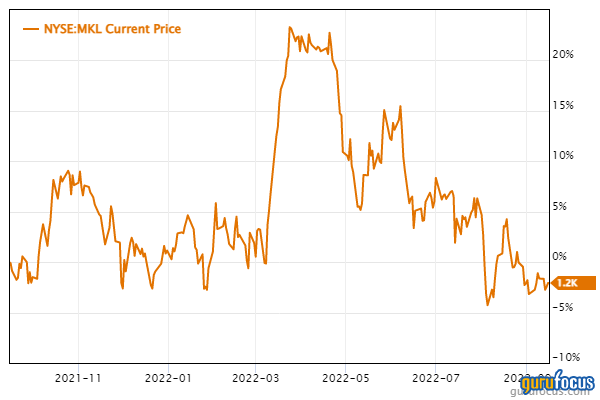 Markel’s financial strength was rated 5 out of 10 by GuruFocus. As a result of the company issuing new long-term debt in recent years, it has weak interest coverage. It is also struggling to create value since the WACC outshines the ROIC.

The company’s profitability scored a 7 out of 10 rating even though its margins and returns are underperforming versus a majority of industry peers. Markel also has a moderate Piotroski F-Score of 5, meaning conditions are typical for a stable company. Due to a decline in revenue per share growth over the past 12 months, the 2.5-star predictability rank is on watch. GuruFocus found companies with this rank return, on average, 7.3% annually.

With a 3.46% holding, Buffett is Markel’s largest guru shareholder.

HPQ, Financial) shares have fallen approximately 3.4% over the past year. The stock is currently 3.26% above its annual low of $26.11. 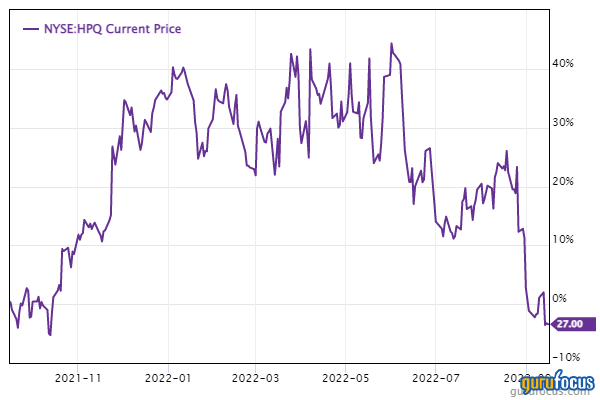 The guru owns 104.5 million shares of the company, accounting for 1.14% of his equity portfolio.

The Palo Alto, California-based hardware company, which manufactures computers, printers and related supplies, has a $27.11 billion market cap; its shares were trading around $26.95 on Thursday with a price-earnings ratio of 4.72 and a price-sales ratio of 0.44.

GuruFocus rated HP’s financial strength 5 out of 10. Although the company has been issuing new long-term debt over the past several years, it is manageable due to adequate interest coverage. The Altman Z-Score of 2.44, however, cautions that it is under some pressure. Value creation is also occurring since the ROIC eclipses the WACC.

The company’s profitability fared better, scoring an 8 out of 10 rating. While the operating margin is in decline, HP’s returns are outperforming versus competitors. It also has a moderate Piotroski F-Score of 6 as well as a one-star predictability rank. GuruFocus data shows companies with this rank return an average of 1.1% annually.

Buffett is HP’s largest guru shareholder with a 10.10% stake. Other gurus with notable holdings include Dodge & Cox, PRIMECAP and Grantham. 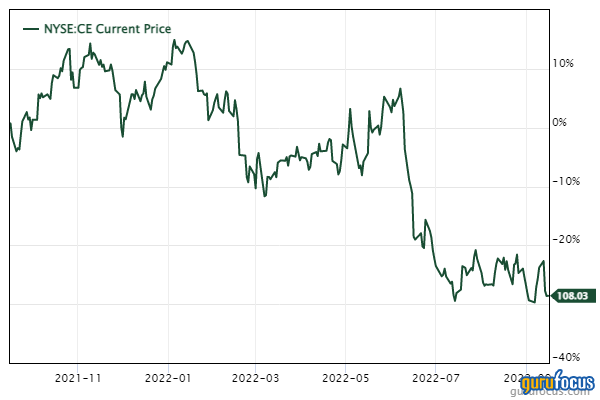 The renowned investor holds 9.15 million shares of the company, giving it 0.36% space in the equity portfolio.

Celanese’s financial strength was rated 6 out of 10 by GuruFocus. Despite issuing new long-term debt in recent years, the company’s interest coverage is sufficient. The high Altman Z-Score of 3.66 also indicates it is in good standing. Further, the ROIC exceeds the WACC, so value is being created.

The company’s profitability scored an 8 out of 10 rating, driven by operating margin expansion and returns that top a majority of industry peers. Celanese is also supported by a high Piotroski F-Score of 7, though the one-star predictability rank is on watch.

Of the gurus invested in Celanese, Buffett has the largest stake with 8.45% of its outstanding shares. Dodge & Cox, Simons’ firm, Dalio,

USB, Financial) stock has retreated more than 20% over the past year. Shares are currently trading 4.13% above the annual low of $43.74. 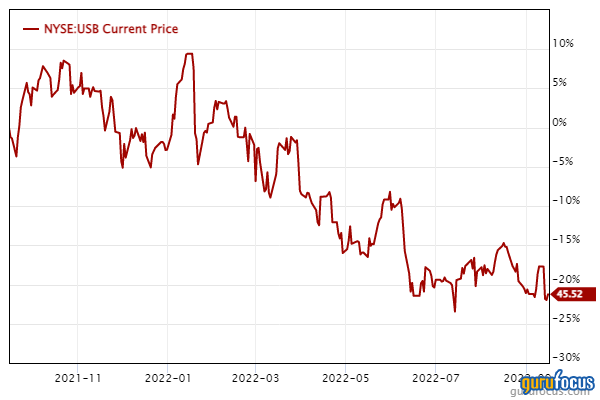 Buffett holds 119.81 million shares, making it his ninth-largest holding with a weight of 1.84%.

Weighed down by debt-related ratios that are underperforming in comparison to over half of its industry, U.S. Bancorp’s financial strength was rated 4 out of 10 by GuruFocus.

The company’s profitability fared better with a 6 out of 10 rating. U.S. Bancorp is supported by margins and returns that top over half of its competitors as well as a moderate Piotroski F-Score of 5. Despite recording a slowdown in revenue per share growth, the bank has a five-star predictability rank. GuruFocus says companies with this rank return an average of 12.1% annually.

With an 8.06% stake, Buffett is the company’s largest guru shareholder. Other notable guru investors include Davis, Grantham,

Two other stocks in Buffett’s portfolio that were trading near their 52-week lows on Thursday were Mondelez International Inc. (