The Inflation Reduction Act is a major reason why

AMGN, Financial) CEO Robert Bradway contends that small and mid-sized biotechs may find it much harder to remain independent, a situation that Fierce Pharma reported was exacerbated by new drug cost legislation in the U.S. This may speed up the already steady stream of biotech acquisitions by larger drug companies.

Bradway said the likelihood you can rely on a single or a couple of innovations and build a large company around that–the way many in the biotechnology industry did over the last several decades– is greatly diminished by the new legislation.

If he is right, what does this mean to investors? One potential outcome is a drop in share price for struggling biotechs, making them more attractive and reasonably priced to larger suitors. On the other hand, it may cause a surge in prices of biotech stocks that investors think might be targeted.

Amgen has been on a buying binge, its last purchase being ChemoCentryx Inc. (

CCXI, Financial) for $3.7 billion, adding to the company’s "leadership in inflammation and nephrology with the drug Tavneos,” Bradway said.

ChemoCentryx’s addition, with Tavneos’ unadjusted global sales potential at over $2 billion by 2030, marks “a meaningful step” toward filling the upcoming revenue gap, the SVB analyst team wrote in a note. Amgen expects generics and competitors to encroach on some of its old reliables, creating a revenue shortfall in certain areas. 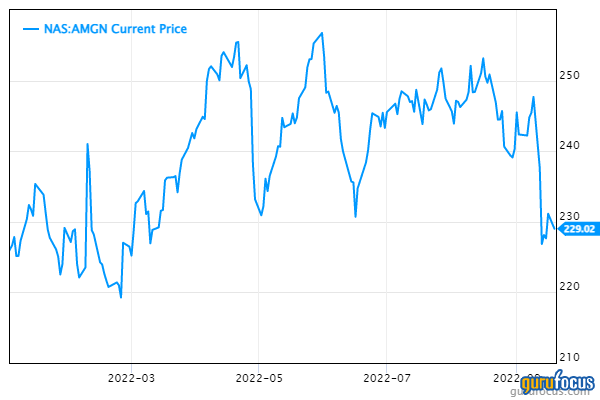 Bradway sees other members of big pharma following Amgen’s lead, targeting acquisitions that may be challenged by the Inflation Reduction Act environment.

Amgen’s goal is to continue to balance internal and external innovation, with an eye toward deals that strengthen its franchises in cancer, autoimmune disorders and general medicine, he added.

Bradway said drug companies that do not have what Amgen possesses - a “sustained base” and “global platform” – are likely to encounter rough going.

He also thinks the IRA will not alter Amgen’s trajectory, but others may not be so fortunate. He said the new bill will hinder innovation while doing little to cut drug costs to patients.

ARGX, Financial) CEO Tim Van Hauwermeiren disagrees with Bradway about the staying power of smaller biotechs. The Dutch company’s head pointed to the successful launch of the firm’s first drug Vyvgart, and the roster of biotechs bringing new and innovative drugs to the market.

"Look at the BioNTech SEs (

BNTX, Financial) of this world—Evotec and Genmab A/S (GMAB, Financial), for example. Like Argenx, they did it their way, he said.