A fertilizer manufacturer with strong fundamentals and a reasonable price

CF, Financial) is one of North America’s giant fertilizer companies. But being a fertilizer company these days means facing climate change and other challenges. Indeed, we have already seen battles between government and farmers in the Netherlands.

Given this environment, can CF continue to deliver bottom-line results in the next five to 10 years?

The Deerfield, Illinois-based company was established as the Central Farmers Fertilizer Company in 1946. Its function at that time was to assure a supply of fertilizer for a group of regional agriculture cooperatives.

The company became CF Industries in 1970 and a publicly traded company (New York Stock Exchange) in 2005. With the switch to public company status in 2005, its focus shifted from supply assurances to financial performance.

Today, it is a $20.28 billion corporation with operations in the U.S., Canada, Great Britain and Trinidad. At the end of 2021, it operated five nitrogen manufacturing plants in the U.S., two in Canada, two in the U.K. (one recently suspended production) and one in Trinidad.

One of those headwinds, of course, is the price of natural gas, which is essential for manufacturing nitrogen. However, CF has been able to pass along those input increases because of several factors, as reported in its first-half earnings statement:

The need to replenish global grains stocks is expected to support continued positive demand for nitrogen products. Based on U.S. Department of Agriculture data, global grains stocks-to-use ratios for 2022/2023 are forecast to be similar to those of 2021/2022, which should sustain continued strength for global grains prices, incentivizing nitrogen fertilizer application.”

Headwinds also include the push in many countries to reduce emissions that contribute to climate change. In June, the Netherlands government set targets for nitrogen reduction. In response, farmers have staged mass protests. The Canadian government has announced similar intentions and other countries likely will follow.

CF recognizes the need to reduce emissions. In his 2021 letter to shareholders, President and CEO Tony Will wrote:

“We made substantial progress on our clean energy initiatives. We started construction on North America’s first carbon-free green ammonia production capacity and announced two projects that, when complete, will enable the production of almost 2 million tons of low carbon or 'blue' ammonia (which is equivalent to 1.25 million tons of net-zero carbon ammonia) – ammonia produced conventionally with the CO2 byproduct captured and geologically sequestered.”

That begs the question: Does CF have the financial horsepower to decarbonize all its production?

The company reported in its 10-K that its markets are global and intensely competitive. Competitive criteria include delivered prices and, to a lesser extent, customer service and product quality. At peak demand periods, availability and delivery times influence buying decisions.

It lists its major North American competitors as Nutrien Ltd. ( 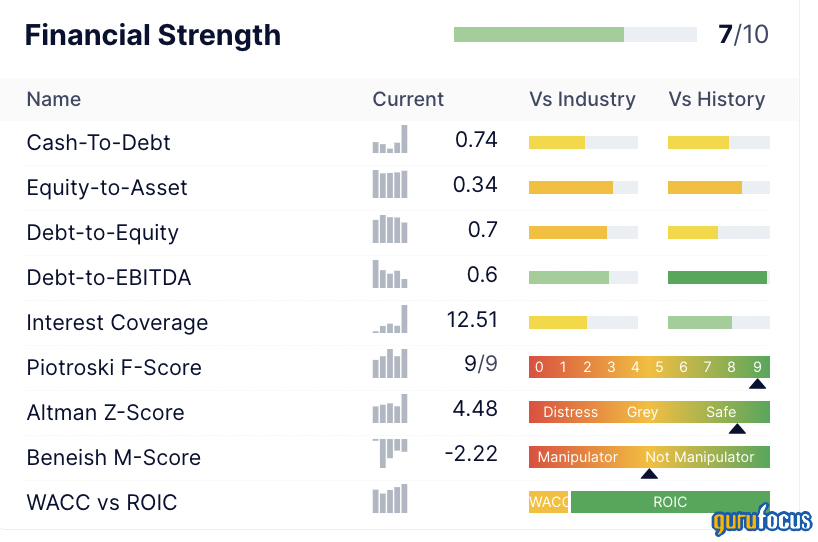 CF receives a better than average financial strength rating for companies in the agriculture industry. That’s based mainly on the interest coverage ratio, which is adequate but not outstanding.

At the same time, another elements of the rating, the Altman Z-Score, is quite strong. The same holds for another measure of financial stability, the Piotroski F-Score.

What is most impressive on this table is the relationship between the return on invested capital and the weighted average cost of capital. The ROIC at 36.70% is nearly five times greater than the WACC at 7.81%. 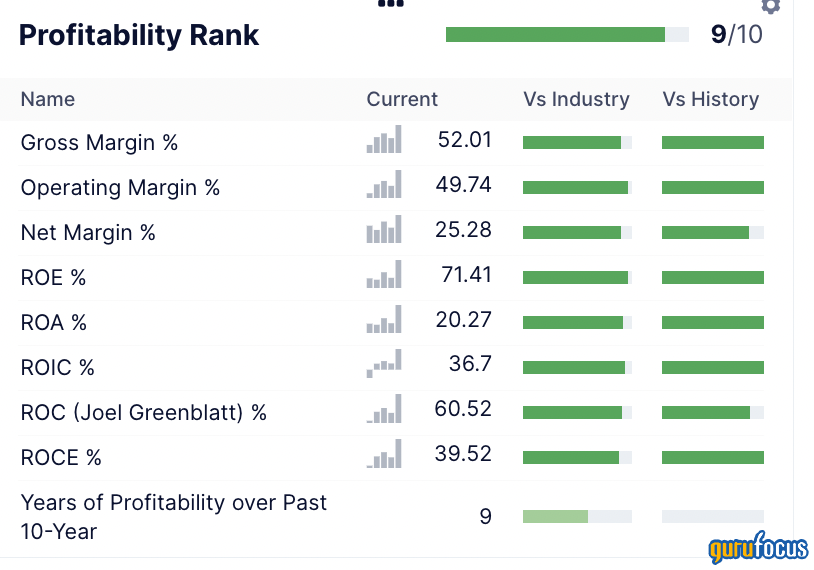 The profitability rank story is told by the sea of dark green bars, each indicating that CF is outperforming it competitors and peers. The only exception is the years of profitability in the past decade, and the company has missed only once.

Note, too, that the company’s current profitability is better than its historical averages, which tells us the company is currently enjoying excellent results. 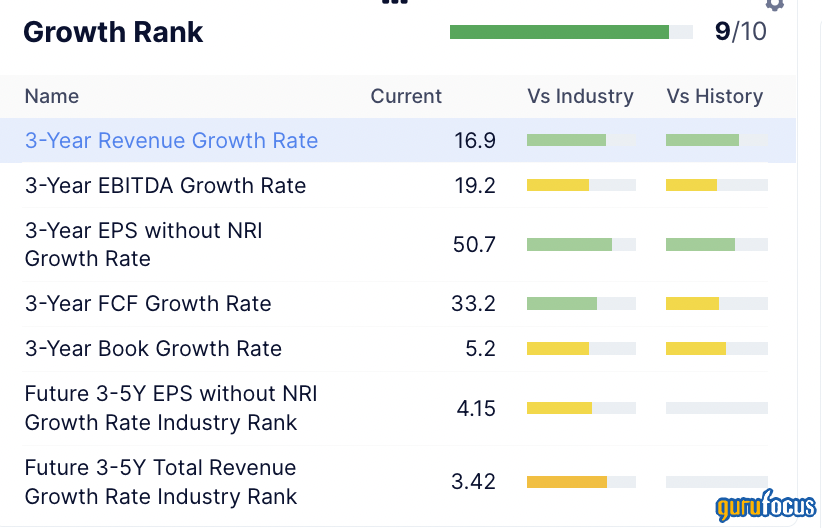 Revenue, Ebitda and earnings per share without nonrecurring items are all in high gear, with growth rates that are higher than industry medians.

Although returns have been bumpy over the past decade, revenue and Ebitda have trended upward: 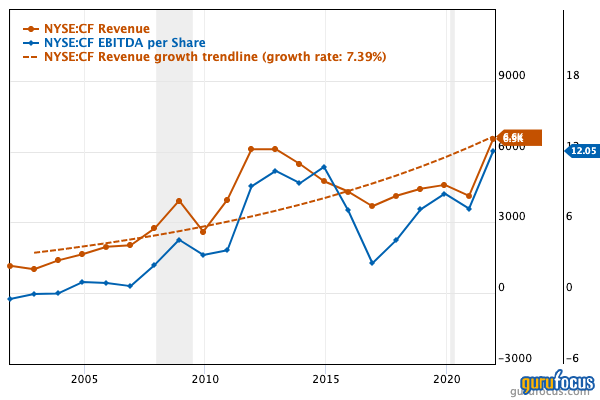 As for earnings per share, they have been mostly recovering after a deep dip in 2015 and 2016: 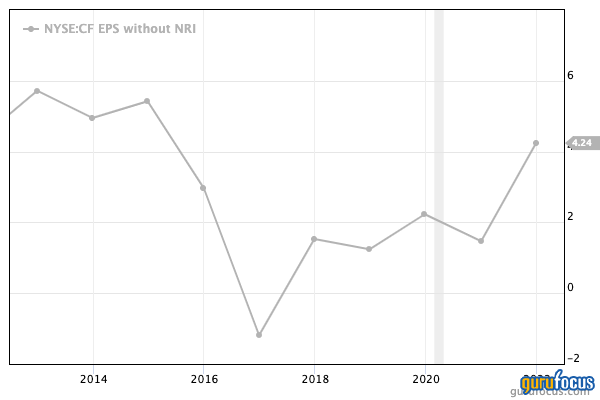 And free cash flow has been on a similar trajectory: 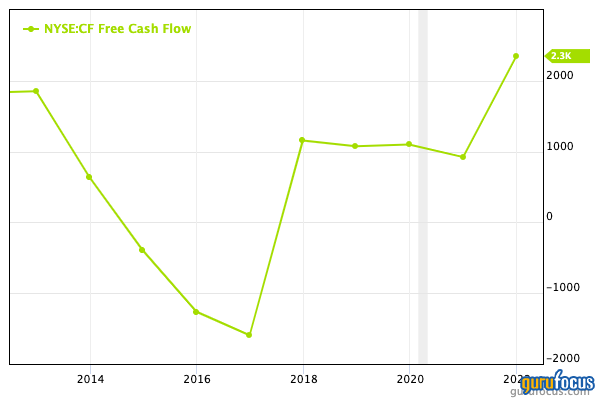 CF pays a dividend, but as the yellow bar tells us, it is below the industry median of 1.83%. At the same time, the company has lots of room to grow the dividend, since the payout ratio is just 11%.

Over 10 years, the number of shares outstanding has fallen by even more than the three-year average: 3.93% over the past decade and 2.30% over the past three years.

This is a 10-year price chart, showing how the market has blown hot and cold on CF stock (and especially cool when its earnings per share slid in 2015 and 2016): 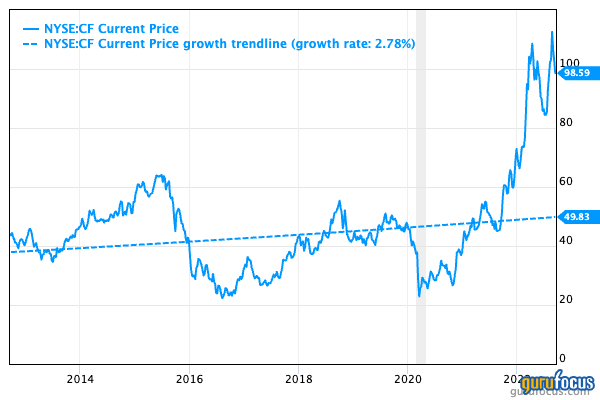 From the chart we can see the price has surged much higher in the past two and a half years.

Despite that, its price-earnings ratio is well below the industry median of 14. And the PEG ratio is significantly less than the fair value mark of 1. 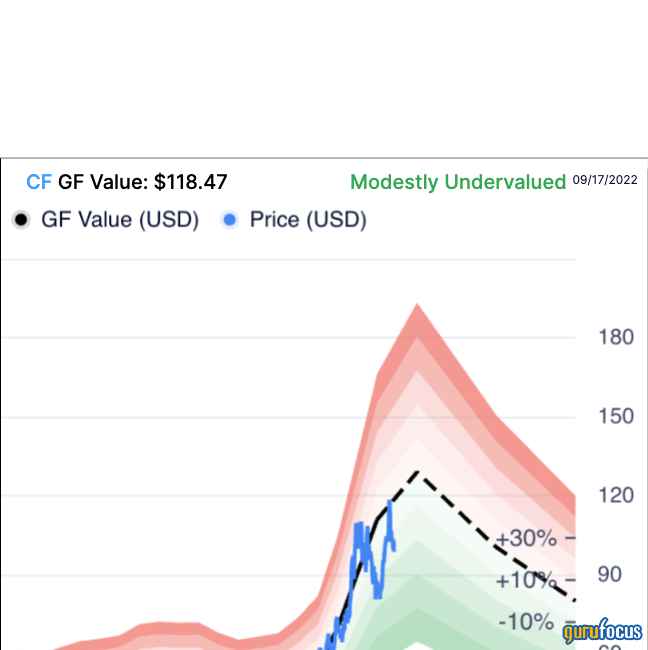 Overall, CF enjoys a robust GF Score of 88 out of 100, indicating is has good performance potential going forward. 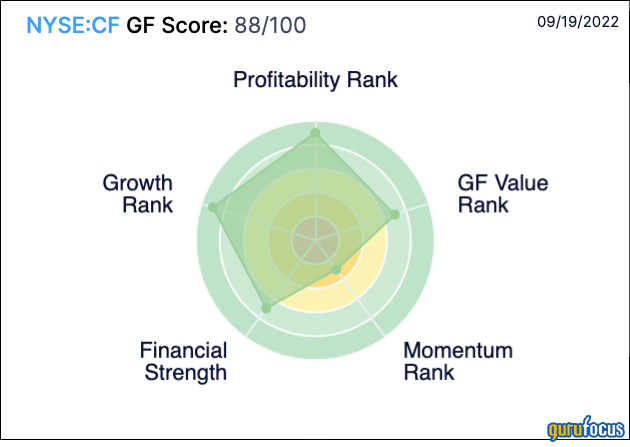 Eight of the investing gurus had positions in CF at the end of the second quarter. The three largest stakes were those of:

Yes, there are headwinds that will challenge CF Industries in coming years, but the company seems well positioned to handle them. It has already begun reducing its carbon footprint and appears to have ample margins, profits and cash flow to continue down that path.

From a valuation perspective, it scores as undervalued on the basis of its GF Value chart, price-earnings ratio and PEG ratio.

This may be a stock for consideration by growth investors who agree there is a bright future for the company. Value investors might like the price but will want to review its debt situation in more detail. For income investors, there are better opportunities elsewhere in the market.