Despite the hedge fund's support, the railroad company is overvalued and faces macroeconomic headwinds

I find the stock to be problematic, though. Here are a few key takeaways worth considering.

Key metrics are not aligned

The letter mentioned that Canadian Pacific "is a high-quality, inflation-protected business led by a best-in-class management team that operates in an oligopolistic industry with significant barriers to entry. With an improving volume and pricing outlook combined with the upcoming transformational acquisition of Kansas City Southern ('KCS'), we believe that CP's prospects are bright."

Drawing inferences from the statement, it is likely that Pershing Square believes companies with market strongholds and core economic exposure will outperform the market in the coming quarters.

That said, the state of Canadian Pacific's key variables and the broader economy do not align with Pershing Square's assessment. For instance, the stock's return on common equity of 13.86% is subpar compared to its historical average. Moreover, the return on invested capital of 3.92% is merely above the surface, indicating that its net operating profit after tax is lagging efficiency because the company is not utilizing its working capital to maximum potential.

From a macroeconomic vantage point, Canadian Pacific will likely be influenced by a pending global recession. Railroad traffic is inextricably linked to economic activity, which is likely to slow amid resilient inflation, a pending European energy crisis, continuous Covid-19 lockdowns in China and unaligned global monetary policy.

Again, these claims are not well aligned as both relative and absolute valuation metrics suggest the stock is overvalued. For example, according to GuruFocus, the price-earnings ratio of 32.7 exceeds its normalized average of 28.8. 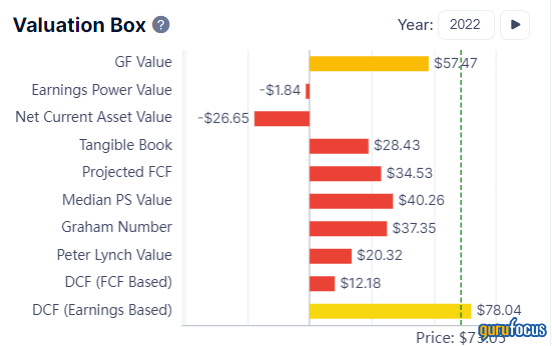 Pershing Square's recent bullish case on Canadian Pacific is slightly odd, given how unaligned its claims are with the actual data. The stock is severely overvalued, poses unimpressive return metrics and faces an array of macroeconomic headwinds. Thus, I am bearish on the stock and dispute the hedge fund's argument.