Ford Has Cost Issues, but a Cheap Valuation

The company is facing inflationary and supply chain issues

F, Financial) is the fourth-largest automobile manufacturer in the world with revenue last year coming in at $136 billion. The company sells very few cars nowadays with trucks representing 53% of sales in August. SUVs made up 45% of sales, while traditional cars accounted for the other 2%. Electric vehicles make up approximately 3.7% of total unit sales. Last year, CEO Jim Farley said the company hopes to produce 600,000 electric vehicles by 2024.

Ford Credit is a big part of the company’s operations, providing vehicle-related financing and leasing activities to and through automotive dealers. It also provides retail installment sale contracts for both new and used vehicles as well as direct financing leases for new vehicles to retail and commercial customers. Ford Credit also provides wholesale loans to dealers to finance the purchase of vehicle inventory and loans to dealers to finance working capital needs. This segment generates almost $10 billion in revenue for the company.

Founded in 1903, the Dearborn, Michigan-based automaker currently has a $53 billion market capitalization.

On Sept. 20, the company made a surprise announcement about much higher operating costs expected in the current quarter. It said, “…based on recent negotiations, inflation-related supplier costs during the third quarter will run about $1.0 billion higher than originally expected.”

Ford said supply shortages will result in a higher-than-planned number of “vehicles on wheels” built but remaining in itss inventory as it awaits these parts. The total amount of vehicles believed to be stuck in inventory is in the 40,000 to 45,000 range and are high-margin trucks and SUVs. These stranded vehicles are expected to completed and sold in the fourth quarter of this year.

For the second quarter of 2022, the company posted revenue of $40.2 billion on the back of a 35% increase in wholesale shipments along with favorable pricing and higher-margin vehicle mix. Net income was $667 million, a margin of 1.7%, which included a mark-to-market loss on Ford’s losing stake in Rivian (

RIVN, Financial). Adjusted Ebit was $3.7 billion, leading to an adjusted Ebit margin of 9.3%. 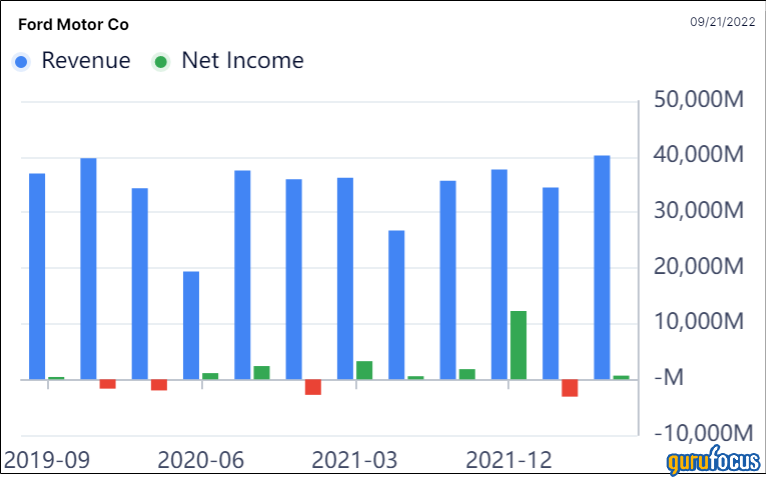 Automotive companies typically sell at low valuation levels due the inherent cyclicality in the business where large-ticket items do not fare well in a recession. Earnings can rapidly change when consumers decide not to buy new cars.

Consensus analyst earnings per share estimates are approximately $2.05 for 2022 and $1.95 for the following year. That puts Ford stock trading 6.5 times this year's earnings estimates and almost 7 times next year's. The low multiples exist because, in a major recession, these earnings estimates could be cut in half. The company sells at about 5.5 times Ebitda based on current year estimates.

The GuruFocus discounted cash flow calculator produces a value of approximately $23 per share using $2 as the earnings starting point and 4% long-term growth, which is roughly a proxy for future gross domestic product growth.

The company pays an annualized dividend of 60 cents, which creates a dividend yield of 4.60%. The payout ratio is well below 50% based on current earnings per share estimates.

Gurus who have recently purchased shares of Ford include

Ford is a high-quality and well managed company with beloved products, a rich history and a conservative approach to operations. But when the next real recession hits, the company’s earnings will be negatively affected in a big way.

However, that scenario may already be priced into the stock as it is selling near 52-week lows. The above-average dividend yield may provide some stability for investors in the near term.