GIS, Financial) reported quarterly earnings results that showed the company continues to see solid growth in its business. Margins are also improving, which could mean supply chain headwinds are beginning to ease. The stock responded positively, with shares climbing nearly 6% following earnings, which bucked the significant decline that the S&P 500 Index experienced on Wednesday.

Let's take a closer look to see if General Mills has value at current levels.

General Mills reported results for the first quarter of fiscal year 2023 on Sept. 21. Revenue of $4.72 billion was in line with what Wall Street analysts had anticipated, but represented 4% growth year over year. Adjusted earnings per share of $1.11 compared to 99 cents in the prior year and was 11 cents better than expected.

Organic growth was very strong at 10%. Divestures reduced results by 5% and currency was a 1% headwind. Gains were due to price increases and product mix, though organic volume was lower by 5%.

All segments showed a decline in volume, with International down 7%, North America Retail falling 5% and Pet and North America Foodservice both lower by 3%.

On the other hand, nearly all businesses showed a double-digit benefit from pricing and mix. North America Foodservice, Pet and North America Retail were up 21%, 17% and 17%, respectively. International improved 5%.

Leadership provided revised guidance for the fiscal year as well, with the company now expecting organic net sales growth of 6% to 7%, up from prior guidance of 4% to 5%. Excluding currency exchange, adjusted earnings per share growth is now forecasted to be 2% to 5%, up from flat to 3% previously.

The largest segments also had positive growth quarters, with the three largest components all posting double-digit organic growth rates. International, where General Mills has made several divestitures, was really the only weak spot among the different segments.

Inflationary pressures continue to be an issue for General Mills, just as it is for almost the entirety of the consumer staples space. The positive for the company is that it has been able to pass along price increases without seeing demand decline substantially. Just as it has in the prior quarters, pricing and mix more than compensated for weaker volume.

As a result, General Mills was able to raise its outlook for the new fiscal year, with the company expecting to deliver mid-single-digit organic growth. This follows last fiscal year’s organic growth of 6% that was also driven by price increases.

Fewer supply chain disruptions would act as a material benefit for General Mills and help the company continue to see its margin expand further and likely lead to it hitting its earnings target for the fiscal year.

Shares of General Mills trade at close to $79 per share. Using the midpoint of company guidance and the prior year’s results, the company is projected to earn $4.10 per share in fiscal 2023. This gives the stock a price-earnings ratio of 19.3, which is slightly ahead of the 10-year average of 17.

The GF Value Line shows the stock to be modestly overvalued based on historical ratios, past financial performance and analysts' future earnings projections. 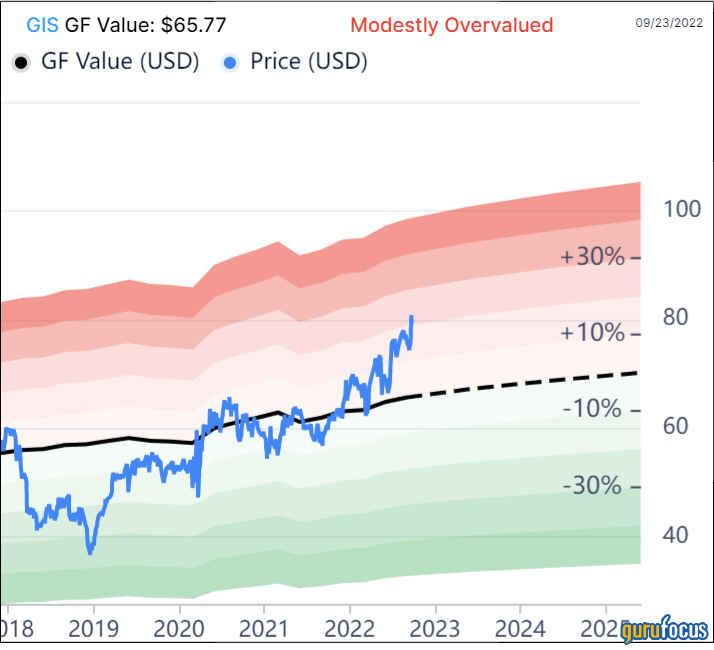 Presently, General Mills is predicted to produce average results given its GF Score of 74 out of 100. 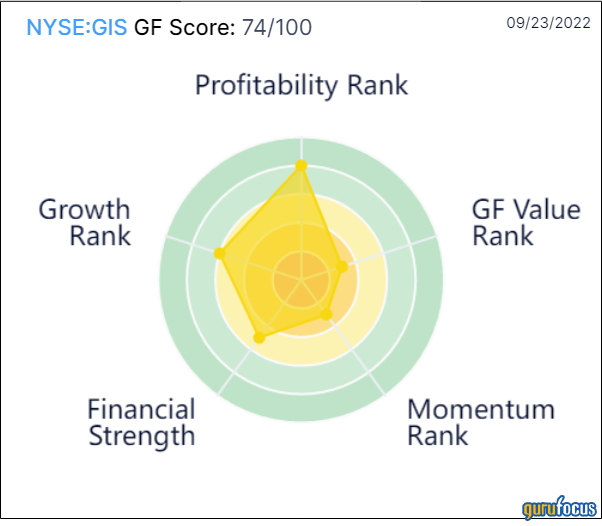 The company scores an 8 out of 10 on profitability thanks to multiple industry-beating metrics, such as gross and net margin and return on invested capital.

However, General Mills receives a 5 out of 10 on financial strength due to weak debt-to-equity and cash-to-debt ratios as well as middling interest coverage due to an increase in debt issuance over the past several years.

Value is even lower at 3 out of 10 due to middle-of-the-pack ratings on a host of valuation ratios, including price-earnings, forward price-earnings and price-book.

General Mills released its first-quarter report the same day the Federal Reserve announced another 75-point increase in the federal funds rate and signaled more hikes were to come. While the market was in the midst of a massive selloff, shares of General Mills had one of its best days in years. This speaks to the strength of the company’s quarterly report.

The business looks strong in most areas and margins are starting to show improvement. Guidance was also raised. All of these are bullish factors working in the company’s favor.

That said, General Mills is overvalued both on a historical and forward basis. Even the stock’s market-beating dividend yield of 2.7% and more than a century of continuous dividend payments is not enough for me to add to my position at the current price. I will be much more interested in purchasing additional shares at a better price.

For now, General Mills remains at the top of my watch list.