TSE, Financial) is a small-cap specialty chemical company that operates businesses such as specialty plastics and latex binders. Most of its businesses share input commodities, operations, customers and industry end markets. Trinseo was formed in 2010 by combining four former businesses of Dow Chemical Company (DOW, Financial). These included the segments of Polycarbonate Compounds and Blends, Paper and Carpet Latex, Synthetic Rubber and Styrenics.

The company operates through six different segments, producing products such as polycarbonate compounds for the medical and consumer electronics markets, base plastics such as compounds and blends for automotive applications, general purpose polystyrenes for use in appliances, food packaging and consumer electronics and feedstocks which are one of the basic building blocks for most plastics.

End market users include appliance, automotive, consumer electronics, packaging, medical devices, shoes, carpet, paper and construction industries. Trinseo had $4.8 billion of net sales in 2021, boasting 26 manufacturing sites globally, 16 R&D facilities around the world and approximately 3,800 employees. The company has been public since 2014 and currently has a market capitalization of $720 million.

I last wrote about this company back in April. Since then, the stock price has continued to plummet on strong headwinds, making it even more undervalued in my opinion. 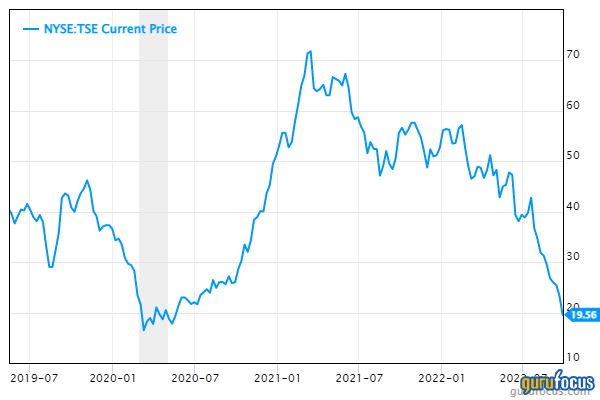 Trinseo made two major acquisitions last year for a combined value of $1.8 billion which were mostly funded by new debt issuance. Aristech Surfaces, which is a global manufacturer of polymethyl methacrylates (PMMA) continuous cast and solid surface sheets, was acquired for a cost of $445 million. Also, Trinseo purchased a large PMMA business from Arkema, a French specialty chemical company, for a cost of approximately $1.36 billion. I believe investors are not yet factoring in these strong acquisitions.

The company reported its fiscal second quarter earnings results on Aug. 8.Revenues in the quarter increased 12% versus the prior-year period. Higher prices resulted in a 14% increase mainly due to the pass through of higher material costs as well as the addition of the recently acquired PMMA and Aristech Surfaces businesses in the Engineered Materials segment.

These increases were somewhat offset by lower volumes across several segments, mainly from lower demand in the building and construction, automotive, appliance and consumer electronics segments. Second quarter net income from continuing operations of $37 million was $96 million below a year ago and adjusted Ebitda came in at $164 million, which was $75 million lower than the company’s record performance in the prior-year period. These decreases were primarily due to lower margins in the Feedstocks and Polystyrene segments as well as lower sales volume.

The CEO of Trinseo stated, “We delivered solid second quarter results in a challenging operating environment that is forcing both Trinseo and our customers to contend with issues including cautious spending in Europe from an uncertain geopolitical situation and significantly higher energy costs, COVID-19 lockdowns in China, and persistent supply chain constraints including a lack of semiconductor chips.”

As of the quarter's end, the company had $264.4 million in cash while total debt was $2.3 billion, which has increased after the recent acquisitions. With expected Ebitda of approximately $600 million, the company’s leverage ratio is approximately 3.4.

Consensus analyst earnings per share estimates are $4.00 for 2022 and $5.46 for 2023. This results in very low forward price-earnings ratios, which are emblematic of the end of an upswing for cyclical business. The enterprise-value-to-Ebitda ratio is also low at 5.8 based on current full-year estimates of Ebitda.

The GuruFocus discounted cash flow calculator gives the stock a fair value estimate of $50 when plugging in EPS of $4.00 as a starting point and assuming 5% long-term growth rates. However, due to the cyclical nature of this business, with often volatile swings, the DCF may not be the most reliable measure of value.

The company pays an annualized dividend of $1.28 currently, which equates to a 5.35% dividend yield. The forward payout ratio is below 50% based on 2022 estimates for EPS.

Trinseo’s very low valuations reflect investors' belief that commodity price reversals and cost pressures will cause major earnings revisions downward. However, the above market dividend yield and low forward price-earnings ratios could provide stability and future upside potential in my opinion. It's true that the stock is cyclical, but it is selling at 52-week lows, which means that investors who believe the economy will eventually improve again have an opportunity to buy low if they like this stock.