Investors with a long-time horizon may be interested in the following three companies, as they meet the below criteria according to the All-in-One Screener, a Premium feature of GuruFocus:

MA, Financial), one of the top names in the U.S. electronic payment space. The $280 billion company generated revenue of $19 billion in 2021.

MasterCard is the second-largest name in electronic payments in the U.S., trailing just Visa Inc. (

V, Financial). The company has a massive network, including more than 25,000 financial institutions, giving it a reach that very few competitors can hope to match. Microsoft and Visa are really the only payment processing names with a worldwide presence, as most competitors tend to be localized to a specific region.

The company has also been a beneficiary of the rise of e-commerce, which has led to an increase in use of electronic payment methods. This improved economy of scale makes it highly unlikely that Mastercard will face stiff new competition for market share.

These tailwinds have led to some high levels of growth over the years. According to Value Line, MasterCard’s earnings per share had a compound annual growth rate (CAGR) of 16.1% over the last decade. That growth rate is projected to accelerate to 21.7% according to Morningstar analysts.

Mastercard offers a small dividend yield of just 0.7%, less than half the average yield of the S&P 500 Index. The dividend has a CAGR of nearly 19% over the past five years, helping to compensate for the low yield. Mastercard’s dividend growth streak stands at 11 years.

Shares of the company have fallen 22% in 2022. The decline has led to a better risk/reward proposition according to the GF Value chart. 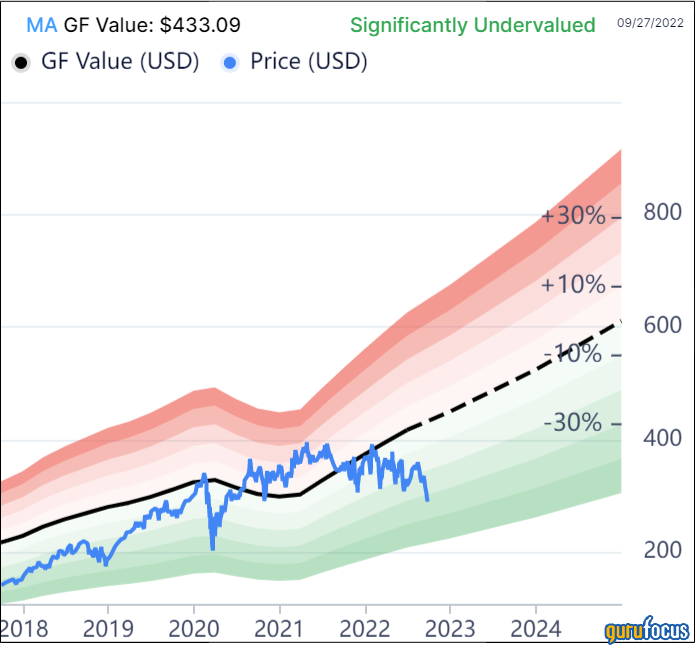 Next up is Oshkosh Corporation (

OSK, Financial), which is a leader in specialty trucks and equipment. The company is valued at $4.6 billion and has annual revenue of close to $8 billion.

Oshkosh's primary competitive advantage is that it a leading provider of specialized equipment used for a wide variety of purposes. The company’s portfolio contains a wide range of trucks used for access, commercial, fire and rescue and military purposes. Oshkosh’s revenues are fairly diversified, with 40% coming from Access Equipment, a third from Defense and the remaining split between Fire and Emergency and Commercial. The company had a backlog approaching $12 billion as of the end of the most recent quarter, which is 50% more than it produced last year.

Earnings growth has been robust at close to 11% over the long-term as Oshkosh rebounded well following a weak showing during the 2007 to 2009 period. Morningstar analysts project that the company will perform well in the medium-term, with earnings growth of 16.7% for the next three to five years.

This year has been difficult for the company as Oshkosh’s stock is down 38% year-to-date. The stock does look attractively valued looking at the GF Value chart. 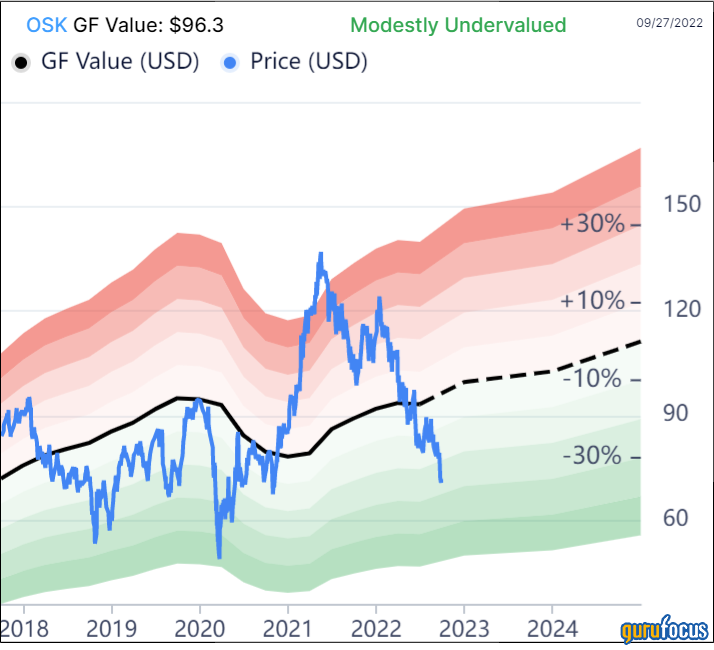 The final name for consideration is Valero Energy Corporation (

VLO, Financial), a leading petroleum refiner. The company has a market capitalization of $40 billion while revenue totaled more than $11 billion last year.

Valero is the largest independent petroleum refiner in the U.S. In total, the company holds 15 petroleum refineries in the U.S., the U.K. and Canada. Most of its footprint is located in the Gulf Coast, which allows Valero to export surplus product from the region. The company has refinery capacity of more than 3 million barrels per day, but averaged 2.6 million barrels per day last year. Valero also has a small renewable and midstream segment, but these are small contributors to the overall business at the present.

Prior to 2021, Valero had raised its dividend for a decade. The pandemic hurt business, forcing the company to freeze its dividend. Still, the dividend had a CAGR of 22% over the last 10 years. Valero offers an attractive yield of 3.9%.

Unlike the other stocks discussed here, Valero has had a very good year, with the share price climbing more than 31%. Even so, the stock continues to look undervalued based on the GF Value chart. 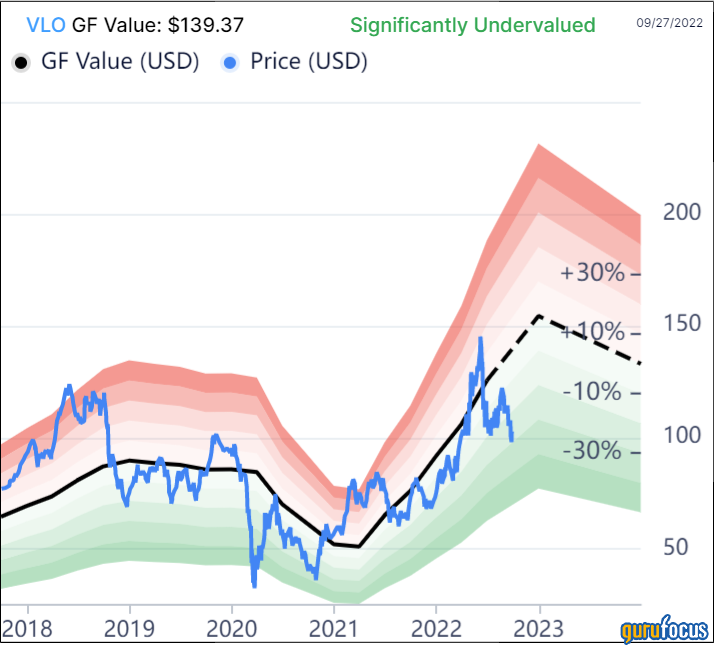 While the current market action can feel like a rollercoaster, value investors can benefit by taking a long-term view and picking up top quality stocks while they are cheap. Identifying companies that have the potential to post strong earnings growth several years out is a difficult prospect, but I believe searching for stocks that are trading below GF Value with strong estimates from analysts is a good starting point for further research.