NVS, Financial) has launched some of the most novel therapeutics over the past five years, and yet it sells at just a few dollars above its 52-week low, has a trailing 12-month price-earnings ratio of just 7.50 and pays a dividend that yields 4.37%. Shares of Novartis have lost 11.8% so far this year compared with the industry’s decline of 5%. 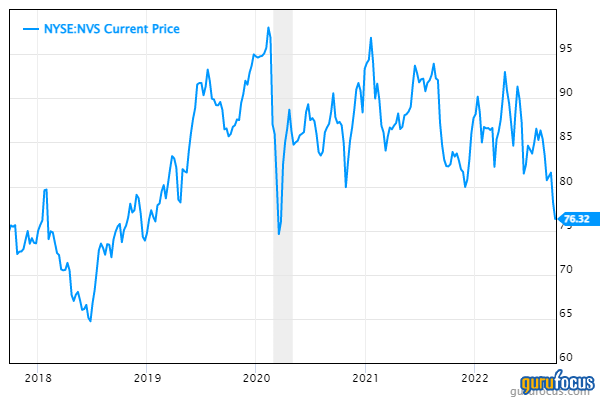 The Swiss company recently outlined a bold plan to transform itself into one of the top five drug companies in the U.S. by 2027. Investors who have been following the stock may want to pay attention as it puts the spotlight on growth. Novartis executives said the transformation is nearly done during a meeting last week with investors and industry analysts. The changes are going to be painful for many as the company will likely cut thousands of jobs, including many in senior positions, but management believes this is the best move for the company's future.

The plan is to simplify Novartis’s operations by combining the oncology and pharmaceuticals business, according to an article in BioSpace. In doing so, Novartis will advance eight of its marketed drugs, each having the potential to hit multi-billions in peak sales. The company is also putting greater resources behind drugs in its pipeline that have the highest potential payback.

Results from key clinical trials could impact the stock as we learn how several of the company’s pipeline drugs fared in testing, with important readouts coming in the next several years. Among those is the ongoing assessment of the breast cancer drug Kisqali; data from the program is expected next year.

Investors might want to keep their eyes on the other potential catalysts listed below with anticipated readout time frames:

In addition to its focus on the U.S. market, Novartis wants to become one of the top-three companies in China and maintain its leading status in Germany and Japan.

As part of its reorganization, last month, Novartis said it will spin off its generics unit Sandoz into a standalone company. The spin-off is expected to be completed in the second half of 2023.