Homebuilder NVR trades for about $1,850 less than it did 22 months ago

Intuitively, it seems wrong that a single share valued near $4,000 could possibly be underpriced (there’s a mental bias in there, I know). NVR Inc. (

NVR, Financial), though, is precisely one such stock. It has a high sticker price because it stays away from stock splits, but don’t let the share price distract from a company that offers outstanding fundamentals and growth prospects. The share price is so high because it splits a $13.31 billion market cap shared among just 3.28 million shares.

NVR builds homes in the eastern half of the U.S., operating in 35 markets in 15 states. Besides building homes, it has another segment: mortgage banking. NVR had homebuilding revenues of $2.22 billion in the second quarter of 2021, while mortgage banking fees brought in $48.881 million.

The homebuilding segment operates through three brands: Ryan Homes, which sells mainly to first-time and first-time move-up buyers, operates in 34 metropolitan areas, while NVHomes and Heartland homes are designed for move-up and luxury buyers. NVHomes is active in the Washington, D.C. and Baltimore, Maryland areas, while Heartland operates in the Pittsburgh, Pennsylvania metro area.

In its 10-K for 2021, NVR reported the industry is highly competitive. It also explained, “Our homebuilding operations compete primarily on the basis of price, location, design, quality, service and reputation. Historically, we have been one of the market leaders in each of the markets where we build homes.”

NVR argues it has a couple of competitive advantages that contribute to its success. First, it does not develop its own land; instead, it typically buys finished building lots from third-party developers. It noted, “We believe that our lot acquisition strategy avoids the financial requirements and risks associated with direct land ownership and land development.”

Second, the company focuses on building and maintaining a leading market position in each area it enters. “This strategy allows us to gain valuable efficiencies and competitive advantages in our markets, which we believe contributes to minimizing the adverse effects of regional economic cycles and provides growth opportunities within these markets.”

Its strategy has given it an edge over a selected peer group and the S&P 500 over the past five years: 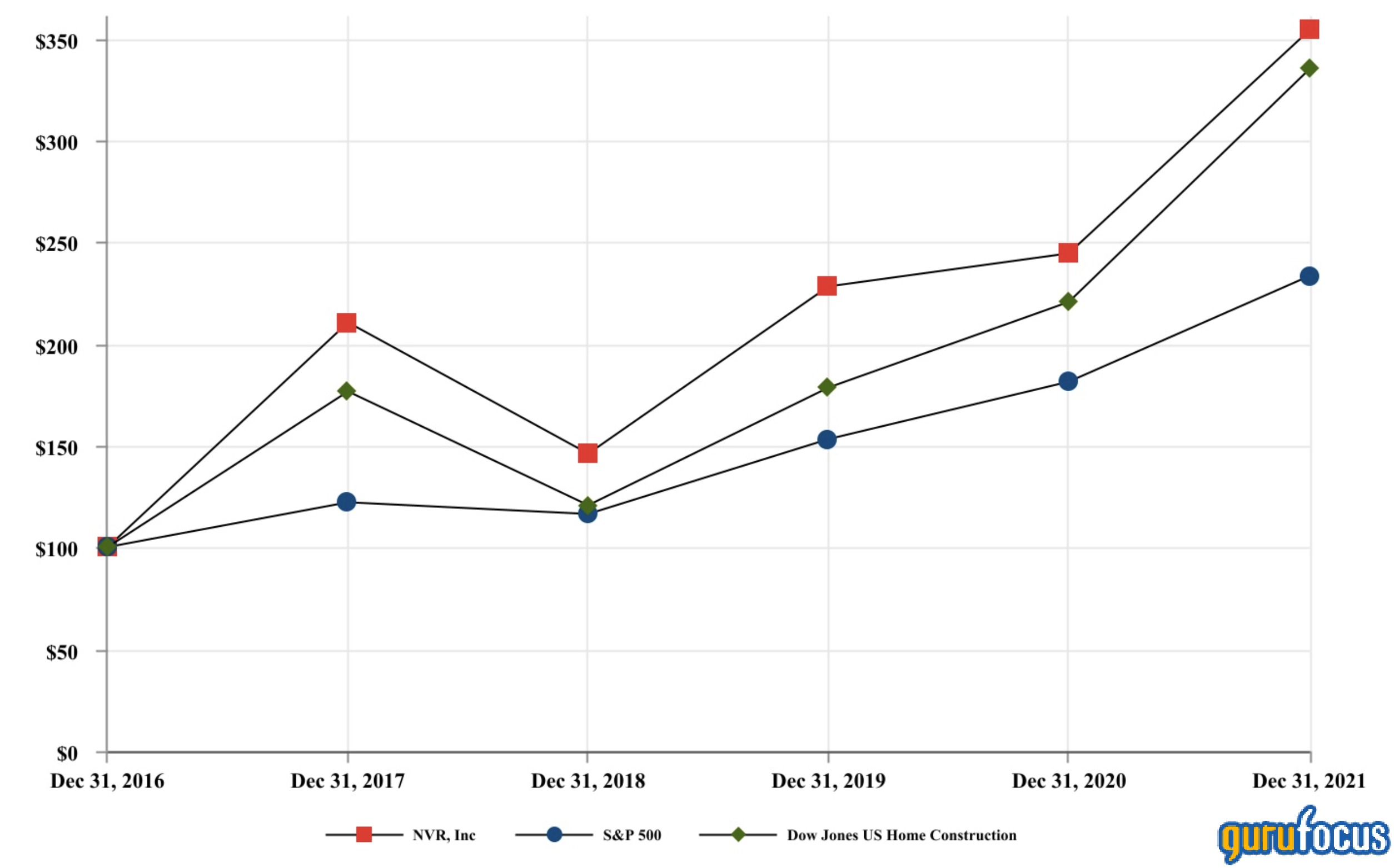 With an interest coverage ratio of almost 40 and a high Altman Z-Score, we know the company has a solid financial base. There is practically a zero chance that it will get into money trouble by my analysis. 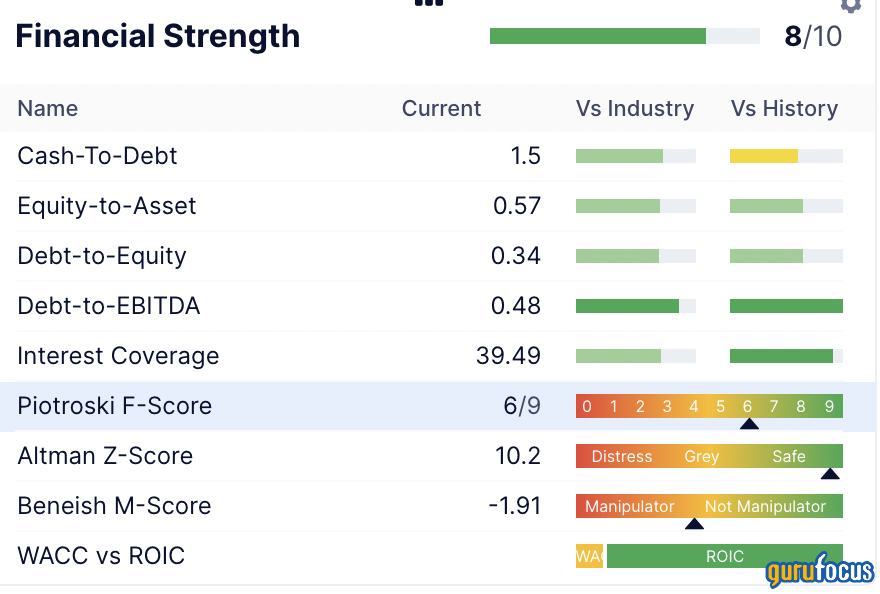 Most impressive on the GuruFocus financial strength table above, though, is its WACC versus ROIC ratio. Its weighted average cost of capital (WACC) is 8.33% and its return on invested capital (ROIC) is 61.72%. Thus, the company creates a lot of value for its shareholders.

Several interesting lines appear in the stock's GuruFocus profitability table, starting with its margins. They’re among the best in the industry and help confirm NVR’s claims about its competitive advantages. To take one specific example, it has a net margin of 15.78% while the homebuilding and construction industry has a median of 7.97%. 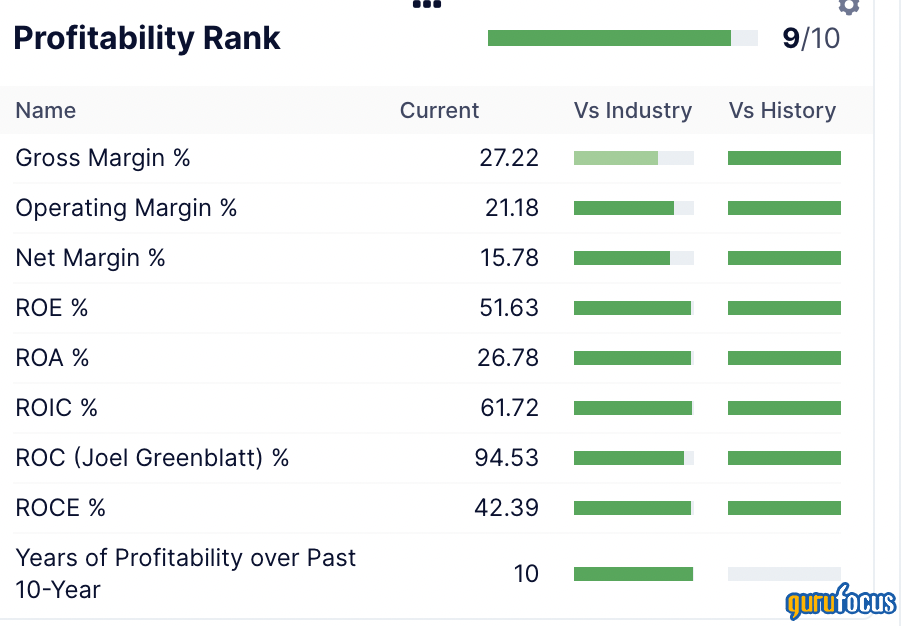 On this table, take in the versus history column as well as the vs. industry column. All those dark green bars tell us the company is in top form at this time, outperforming its previous results and peer averages.

Impressively, despite being in a cyclical business, it has turned a profit in every one of the past 10 years. That’s a mark of a company that has a highly tuned business model.

Compared to many companies in the industry, NVR’s revenue growth is so-so. However, earnings per share without non-recurring items growth is nearly double that rate, meaning the company is run effectively and efficiently. 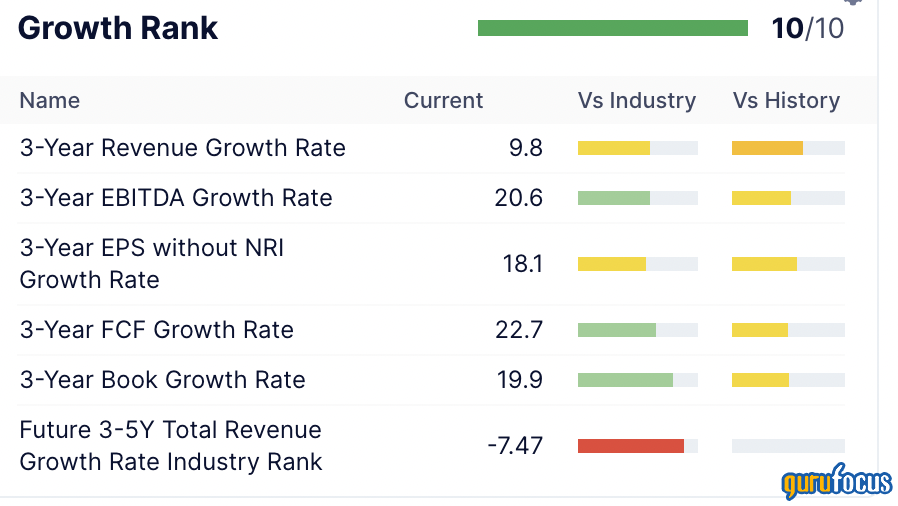 The table also shows respectable growth of free cash flow over the past three years, while the below chart shows it has grown relatively consistently over the past decade: 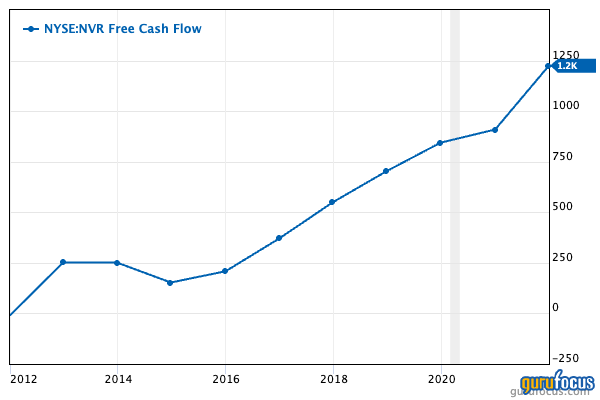 NVR does not pay a dividend, but it has consistently bought back its own shares over the past decade at an average rate of 3.34% per year. 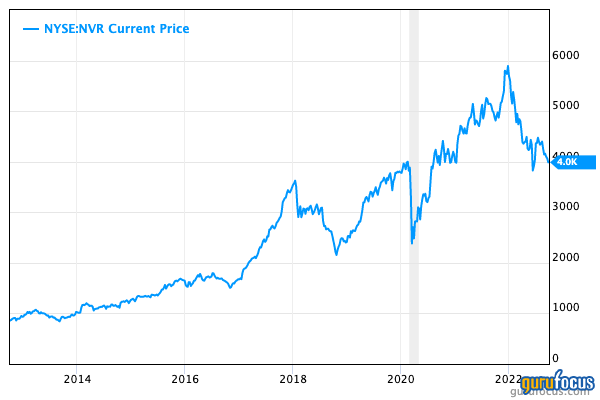 The GF Value chart estimates the stock's fair value at nearly where it was at the end of December 2021: 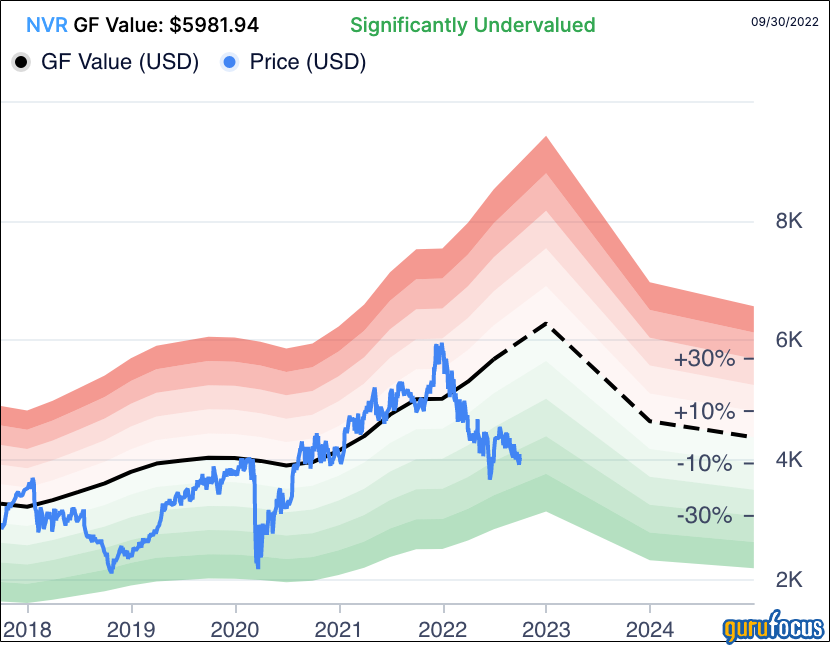 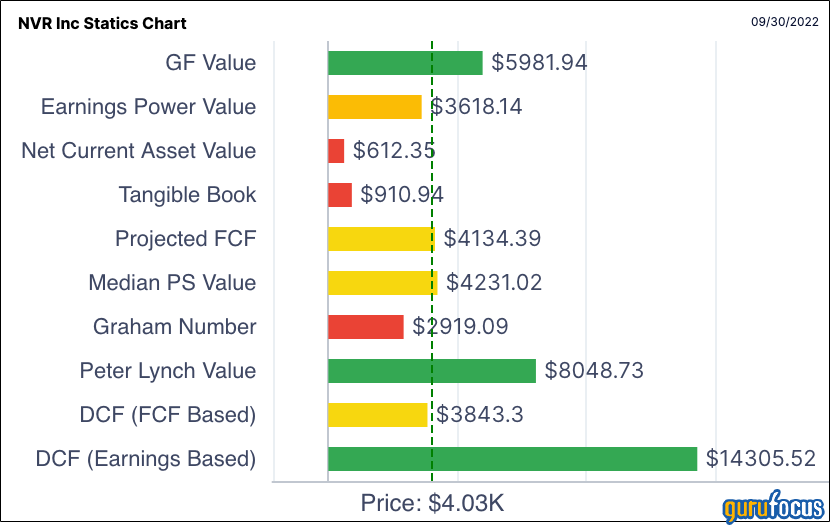 The DCF calculator assumes a 20% growth rate, which is conservative when compared with the company’s 10-year EPS without NRI growth rate of 28.40%. 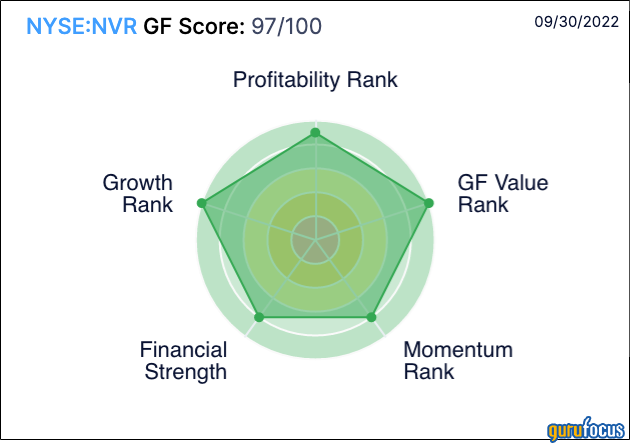 The investing gurus followed by GuruFocus have done much more buying than selling of this stock over the past two and a half years.

At the end of June 2022, these were the three biggest guru owners of the stock:

Institutional investors own 97.12% of the company and insiders hold another 10.25%. Yes, that does add up to more than 100%; this can happen because of technical reporting issues or short selling (both lenders and borrowers are shown as owners).

Value investors might like this stock for its low valuation and the modest amount of debt. For growth investors looking several years ahead, there may be some promise here as well. However, there is clearly nothing here for income investors.