Part of Chicago-based Harbor Funds, the guru's fund primarily invests in companies with market caps of at least $1 billion at the time of purchase. He focuses on companies that have strong balance sheets and earnings performance, good sales momentum and growth outlook, a history of high profitability, a unique market position and a capable, committed management team.

Based on these criteria, Segalas established one new position, divested of eight holdings and added to or curbed a number of other existing investments during the three months ended July 31. Notable trades included a new position in Vertex Pharmaceuticals Inc. (

The guru invested in 955,634 shares of Vertex Pharmaceuticals (

VRTX, Financial), allocating 1.10% of the equity portfolio to the position. The stock traded for an average price of $271.31 per share during the quarter.

He previously sold out of the stock in the second quarter of 2021.

The GF Value Line suggests the stock is fairly valued currently based on historical ratios, past financial performance and analysts’ future earnings projections. 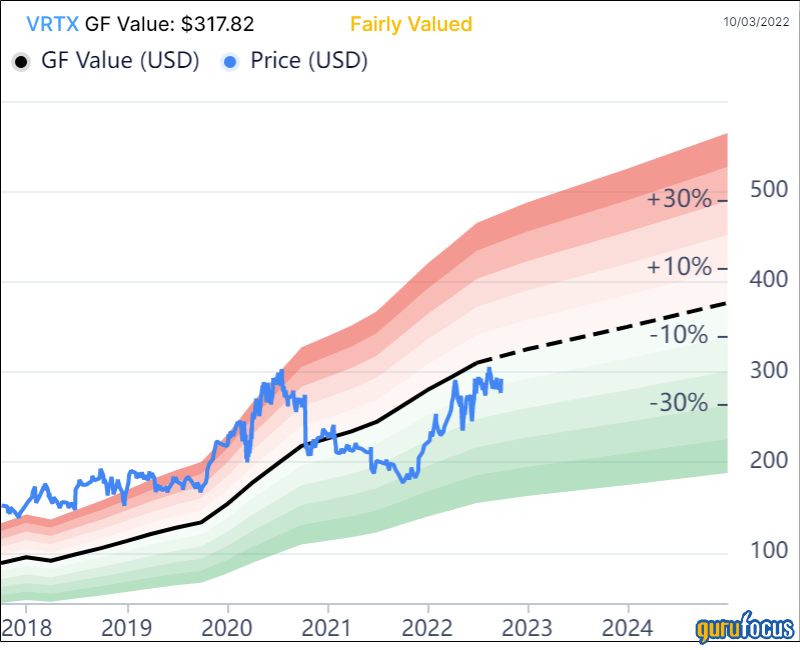 GuruFocus rated Vertex’s financial strength 9 out of 10, driven by a comfortable level of interest coverage. The robust Altman Z-Score of 14.71 indicates the company is in good standing even though assets are building up at a faster rate than revenue is growing. The return on invested capital also overshadows the weighted average cost of capital, so value is being created as the company grows.

The company’s profitability also fared well with a 7 out of 10 rating. In addition to expanding margins, its returns on equity, assets and capital outperform a majority of competitors. Vertex is also supported by a a high Piotroski F-Score of 8 out of 9, indicating conditions are healthy, and a predictability rank of one out of five stars. According to GuruFocus research, companies with this rank return an average of 1.1% annually over a 10-year period.

Of the gurus invested in Vertex, the

Impacting the equity portfolio by -1.05%, Segalas dumped all 10.15 million shares of Snap (

SNAP, Financial). During the quarter, shares traded for an average price of $16.37 each.

GuruFocus data shows he lost an estimated 60.26% on the investment over its lifetime.

The social media company headquartered in Santa Monica, California, which is known for its Snapchat platform, has a market cap of $16.23 billion; its shares were trading around $9.85 on Monday with a price-book ratio of 4.70 and a price-sales ratio of 3.49.

According to the GF Value Line, the stock, while undervalued, is a possible value trap. As such, potential investors should do thorough research before making a decision. 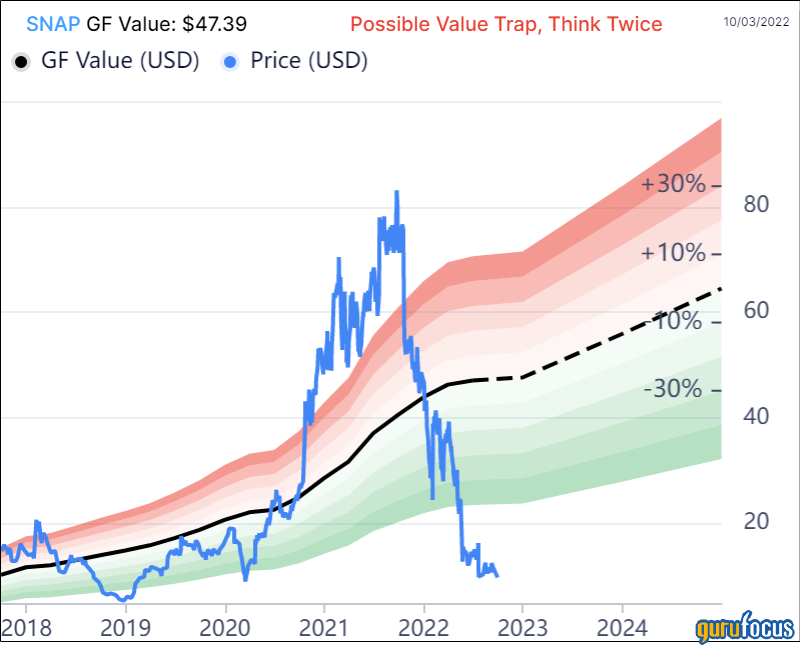 Snap’s financial strength was rated 4 out of 10 by GuruFocus. Weighed down by debt-related ratios that are underperforming versus other industry players, the Altman Z-Score of 1.27 warns the company could be at risk of bankruptcy.

The company’s profitability scored a 3 out of 10 rating. Although the operating margin is expanding, returns are negative and underperform over half its industry peers. Snap also has a moderate Piotroski F-Score of 5, meaning conditions are typical of a stable company.

The investor curbed the Nike (

Segalas now holds 2.50 million shares total, which represent 1.18% of the equity portfolio. GuruFocus estimates he has gained 7.68% on the investment so far.

The Beaverton, Oregon-based company, which is known for its sports apparel, athletic shoes and equipment, has a $135.34 billion market cap; its shares were trading around 86.34 on Monday with a price-earnings ratio of 24.45, a price-book ratio of 8.54 and a price-sales ratio of 2.92.

Based on the GF Value Line, the stock appears to be significantly undervalued currently. 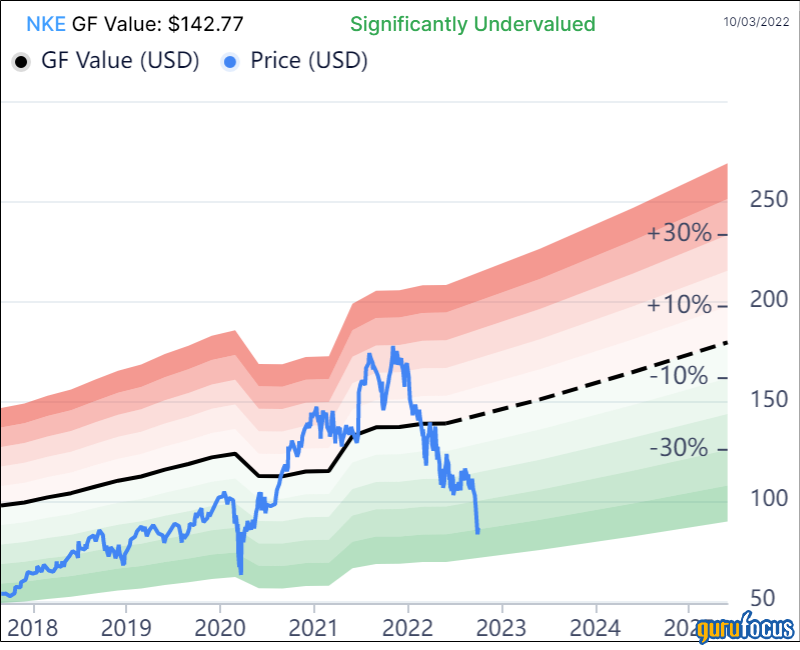 GuruFocus rated Nike’s financial strength 8 out of 10. Although it has issued new long-term debt in recent years, it is manageable due to adequate interest coverage. In addition, the company’s Altman Z-Score of 5.48 indicates it is in good standing even though assets are building up at a faster rate than revenue is growing. The ROIC also eclipses the WACC, so value is being created.

The company’s profitability fared even better with a 9 out of 10 rating due to operating margin expansion and strong returns that outperform a majority of competitors. Nike also has a moderate Piotroski F-Score of 5, but the 4.5-star predictability rank is on watch due to recording losses in operating income in recent years. GuruFocus found companies with this rank return, on average, 10.6% annually.

Ken Fisher (Trades, Portfolio) has the largest stake in Nike with 0.54% of outstanding shares. Franks Sands and Simons’ firm also have significant positions in the stock.

With an impact of -0.76% on the equity portfolio, the guru trimmed the Adobe (

He now holds a total of 1.12 million shares, accounting for 1.88% of the equity portfolio. GuruFocus says Segalas has gained approximately 170.75% on the long-held investment. 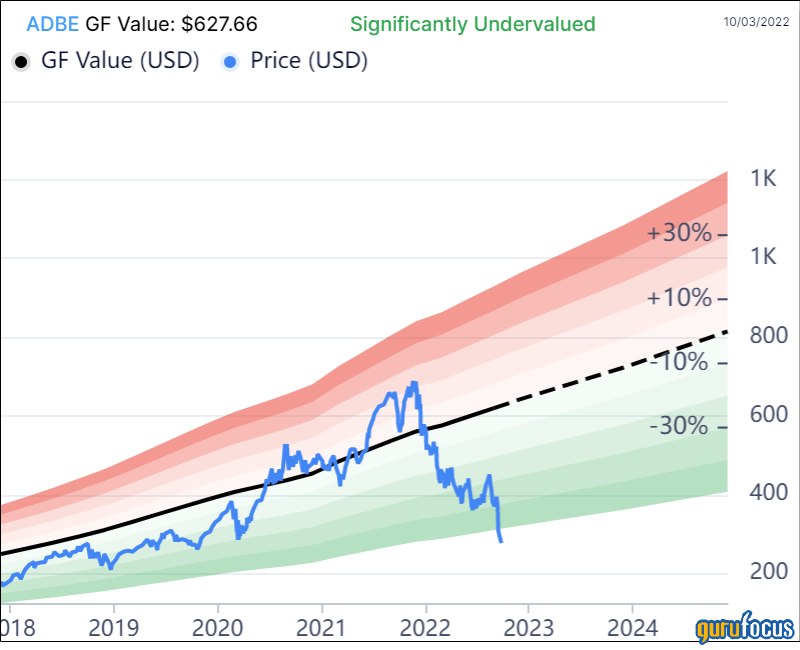 Adobe’s financial strength was rated 8 out of 10 by GuruFocus, driven by a comfortable level of interest coverage and a robust Altman Z-Score of 9.07 that implies it is in good standing. The ROIC also exceeds the WACC, so value creation is occurring.

The company’s profitability scored a 9 out of 10 rating on the back of an expanding operating margin, strong returns that top a majority of industry peers and a moderate Piotroski F-Score of 5. Adobe also has a two-star predictability rank. GuruFocus data shows companies with this rank return an average of 6% annually.

Of the gurus invested in Adobe,

Segalas now holds a total of 760,937 shares, giving it 0.51% space in the equity portfolio. He has gained roughly 1.61% on the investment since establishing it in the first quarter of 2021. 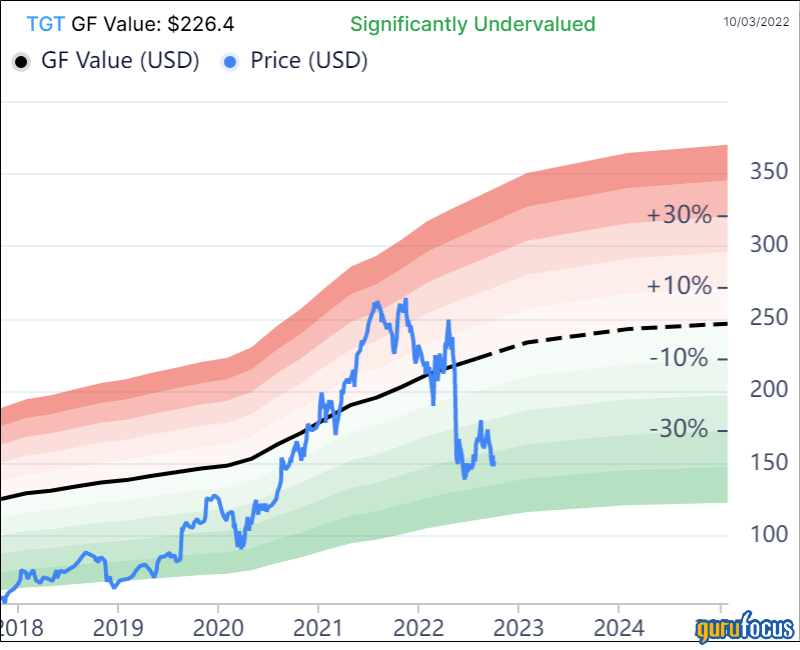 GuruFocus rated Target’s financials strength 5 out of 10 on the back of sufficient interest coverage and a high Altman Z-Score of 3.43. Value is being created since the ROIC surpasses the WACC.

The company’s profitability scored an 8 out of 10 rating, driven by operating margin expansion, strong returns that are outperforming versus competitors and a moderate Piotroski F-Score of 5. Despite recording consistent earnings and revenue growth, the two-star predictability rank is on watch.

With 0.34% of its outstanding shares, Dalio is Target’s largest guru shareholder. Other guru investors include Simons’ firm, the

During the quarter, Segalas also curbed his holdings of Tesla Inc. (

The guru's $24.45 billion equity portfolio, which is composed of 48 stocks, is heavily invested in the technology and consumer cyclical sectors.