Rivian Is Hitting Its Growth Phase

RIVN, Financial), an electric vehicle maker focusing on trucks and vans, reported on Monday that its third-quarter vehicle production increased 67% year over year. The company is on track to meet its 2022 production goals after slashing its original guidance in half due to supply chain issues.

This show of strength amid difficult operating conditions sent the stock soaring by 13% the following day to $36.09 per share. Though it still trades at less than half of its IPO price of $78, that is to be expected considering that it went public right at the peak of the market bubble near the end of 2021. 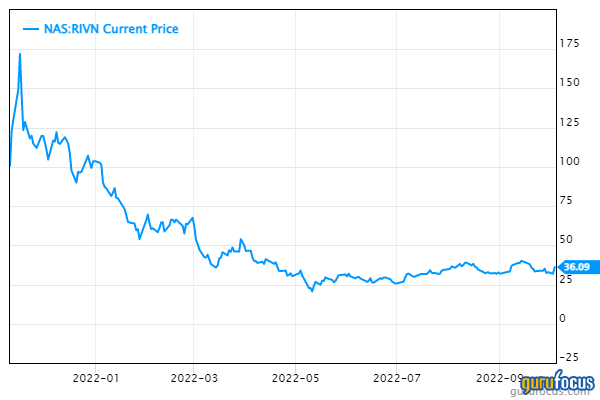 As Rivian gets its production growth phase rolling, the question for investors is, can the stock beat out bear market sentiment or will shares remain depressed for a while yet?

On track to meet reduced guidance

After originally expecting to produce 50,000 vehicles in full-year 2022, Rivian slashed its guidance to 25,000 vehicles in March as global supply chains “added a layer of complexity” to increasing production.

The company confirmed on Monday that it is on track to meet this reduced guidance after producing more than 7,000 vehicles in the third quarter, up 67% year over year and marking its best quarter to date.

Going into more detail, the company said it produced a total of 7,363 vehicles at its Illinois factory in the third quarter and delivered 6,584 vehicles to customers during the period. This brings Rivian’s year-to-date production total to 14,317 vehicles and its delivery total to 12,278.

It did not specify how many units of each of its models were produced. Rivian currently produces three types of vehicles: the R1T pickup, the R1S SUV and delivery vans for Amazon.com Inc. (

Can sales match up to production?

One worry among investors is that as the U.S. economy grows weaker and inflation erodes consumer spending power, the cyclical automotive sector could enter a downturn, which might be bad news for an automaker like Rivian that is just getting started in the market.

However, the prospects remain relatively strong for electric vehicles due to the fact demand still greatly outpaces supply. No single electric truck or SUV model has yet captured the market the way Tesla Inc.’s (

TSLA, Financial) cars have, and there is still a lot of room to grow in this area.

The bottom line is, as long as there are more buyers than vehicles, Rivian should easily be able to see sales match up to production numbers. Right now, those who want to get their hands on one of Rivian’s vehicles have a choice between waiting or heading over to an online bidding site and paying way more than the sticker price.

Despite the promise of high growth rates for Rivian in the near future, investors remain tough to impress as high inflation and rising interest rates keep the bear market going strong.

The current market environment is particularly unfavorable for growth stocks whose valuations rely on profit projections many years into the future, so even as Rivian hits its growth stride, it seems unlikely the stock will see much near-term benefit. Just look at Tesla, which reached new production records in the third quarter but still saw its shares plummet on the news.

For long-term value investors who are interested in Rivian, this means bargain prices could stick around for a phase of the company’s growth that would have been marked by skyrocketing share prices if it had occurred around this time in 2021, though looking at the precedent set by Tesla, we might expect the bulk of capital gains to begin only once Rivian’s bottom line turns positive.