2 Defensive Stocks Michael Burry Has Loaded Up On

Michael Burry is a renowned investor who is most famous for predicting and profiting from the housing crash of 2008.

He is a true value investor with a strong contrarian streak, as he is not afraid to bet against the consensus. A popular character on Twitter, Burry often posts “doomsday” tweets about market crashes before deleting posts. In the second quarter of 2022, he put his money where his mouth is and sold out of all his stocks apart from The GEO Group Inc. (

While he did add to that holding during the third quarter, I want to focus on two of the other five new stocks he loaded up on.

AJRD, Financial), which traded for an average price of $42 per share during the quarter.

Aerojet is a U.S.-based manufacturer of rockets, hypersonic missiles and electric-powered propulsion systems. Its largest customer is the biggest defense contractor in the world, Lockheed Martin (

LMT, Financial), which accounts for 33% of sales. Lockheed Martin planned to acquire the company in the first quarter of 2022 for a staggering $4.1 billion, but the deal was scrapped after regulatory pushback. 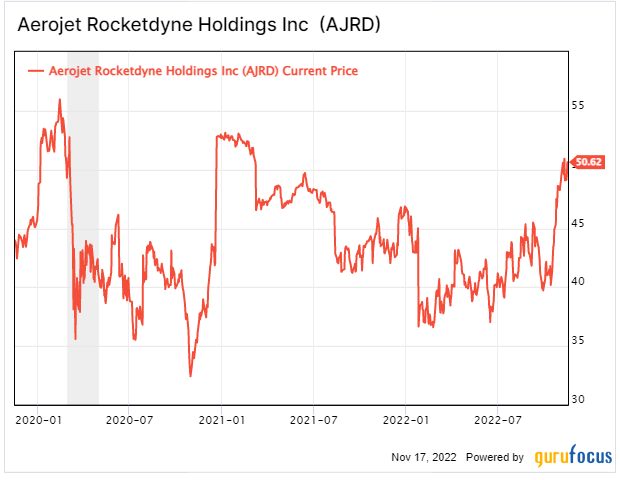 Aerojet is a global leader in hypersonic missiles, which can travel at over five times the speed of sound. Its rockets are used on homeland defense systems and in the popular stinger missile. In addition, the company's core Sentinel rockets are replacing the ICBM ( intercontinental ballistic missile), which is used for the U.S. nuclear program.

The company generated solid financial results for the third quarter of 2022. Revenue was $549.8 million, which increased slightly from the $545 million generated in the prior-year quarter. 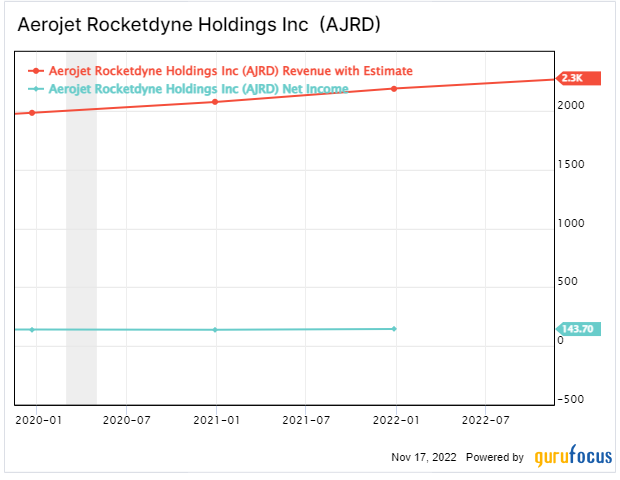 In addition to providing for U.S. national defense, Aerojet powers many of NASA’s space launch systems, such as the Atlas V and Delta IV. The company also recently received a contract for 116 RL10C-X engines to be used for the launch of Amazon’s (

Aerojet has a strong backlog of $6.7 billion and generated free cash flow of $22.3 million in the third quarter. Its profitability on a GAAP basis struggled as the company reported earnings per share of 17 cents, which missed analyst estimates by 34 cents. The good news is on an adjusted basis, the company generated earnings per share of 45 cents, which beat projections by one cent.

Its adjusted Ebitdap has increased from 7.9% in the second quarter to 13.8% in the third quarter due to contract adjustment timing. 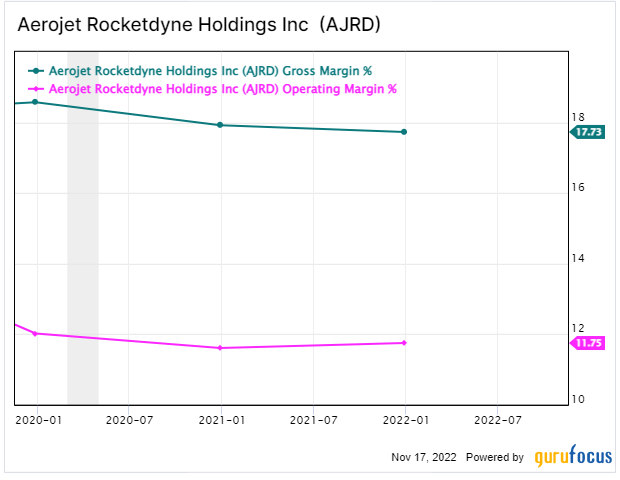 Aerojet has announced a series of new manufacturing facilities, which will be expected to increase capital expenditures, but should benefit the business long term. For example, the company is building a new facility in Camden, Arkansas, which will consolidate multiple manufacturing activities and cause a 90% reduction in the need to transport rocket motors across multiple sites. The company has also announced a new facility in Huntsville, Alabama, which is expected to be operational by 2023.

The company has a solid balance sheet with $344 million in cash and short-term investments. In addition, it has current debt of just $14.7 million, which is manageable.

Aerojet Rocketdyne trades with a price-earnings ratio of 43, which is more expensive than its five-year average. 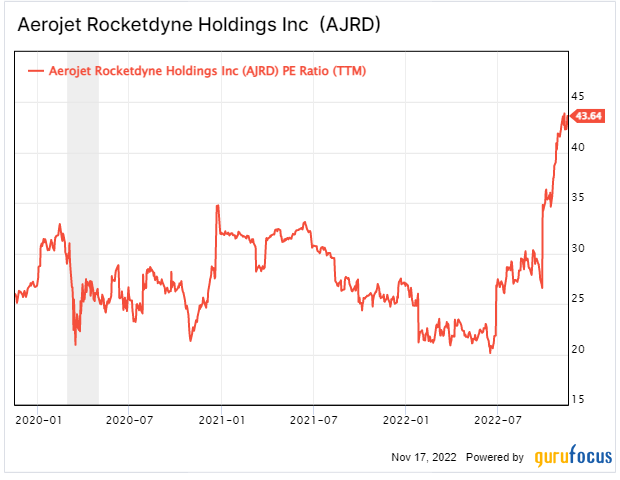 The GF Value Line also indicates a fair value of $46 per share, which indicates the stock is fairly valued at the time of writing based on its historical ratios, past financial performance and analysts' future earnings projections. 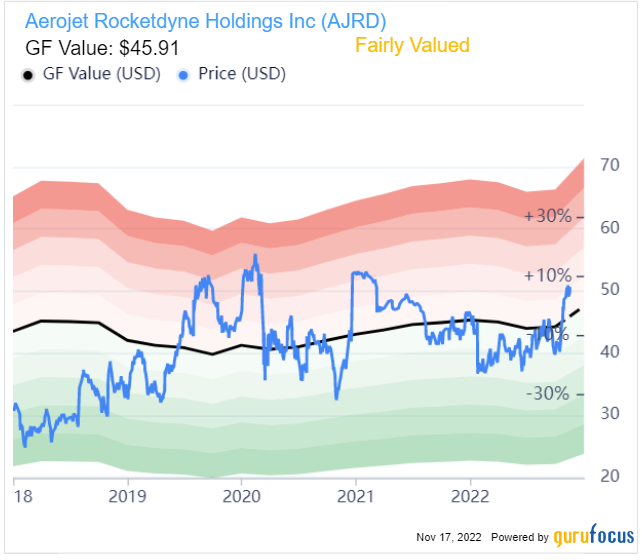 Burry loaded up on 10,000 shares of Charter Communications Inc. (

CHTR, Financial) in the third quarter. The stock traded at an average price of $428 per share during the quarter.

Charter is a leading broadband connectivity company and cable operator in the U.S. The company has over 32 million customers across 41 states, which are powered by its Spectrum brand.

The company also serves a range of small and medium-sized businesses through its business package that offers internet, TV, mobile and voice communications. It recently expanded its business through a joint venture with Comcast Corp. (

CMCSA, Financial) to offer a next-generation streaming platform to customers across the U.S. 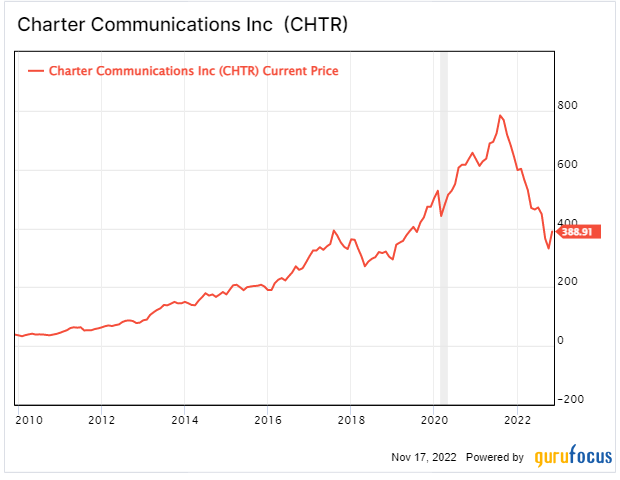 In the third quarter of 2022, Charter Communications generated revenue of $13.55 billion, which increased slightly from $13.14 billion a year ago. 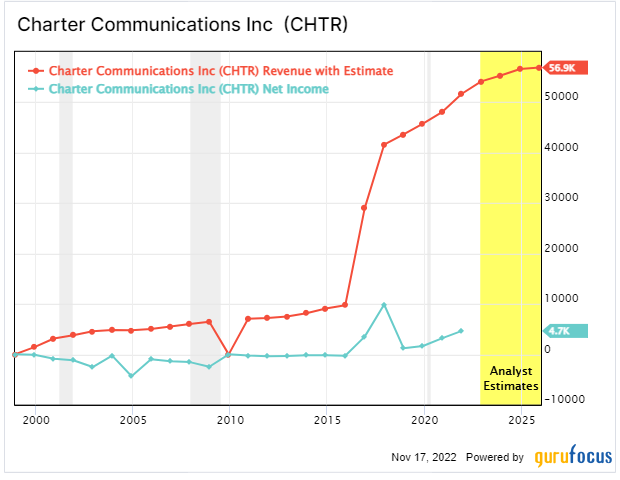 Earnings per share were also consistent at $7.70. This was up slightly from the $6.69 per share generated last year.

Charter Communications has grown its cash flow extremely well over the past several years. Its levered cash flow increased from $3.8 billion in 2018 to $6.5 billion in the trailing 12 months. 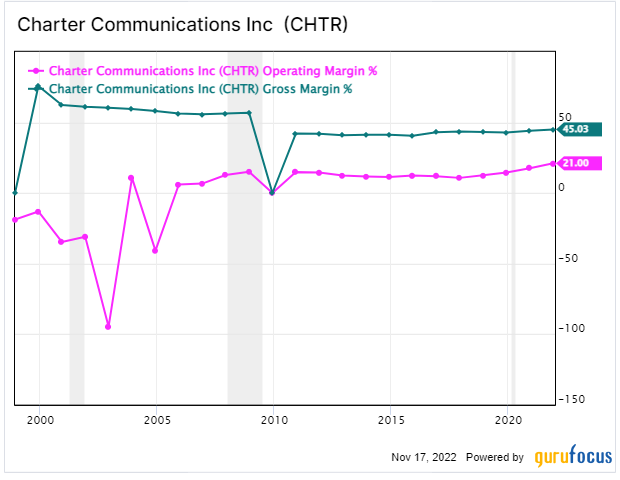 The company has $480 million in cash and short-term investments on its balance sheet. However, its debt level is extremely high with an eye-watering $95.5 billion in long-term debt. The good news is just $1.5 billion is short-term debt that is due within the next two years.

That being said, high debt levels are commonplace for telecoms and internet infrastructure providers.

Charter Communications pays a price-earnings ratio of 12.2, which is cheaper than its five-year average. 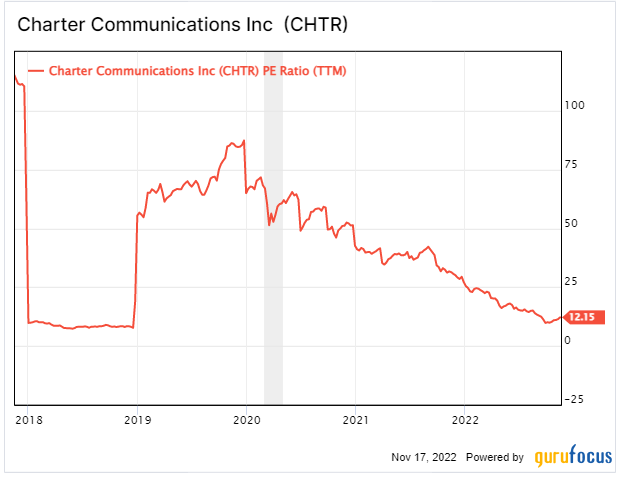 The GF Value Line indicates a fair value of $833 per share, which means the stock is extremely undervalued at its $338 share price at the time of writing. However, GuruFocus does warn of a possible value trap, which could be driven by the sharp decline in share price. 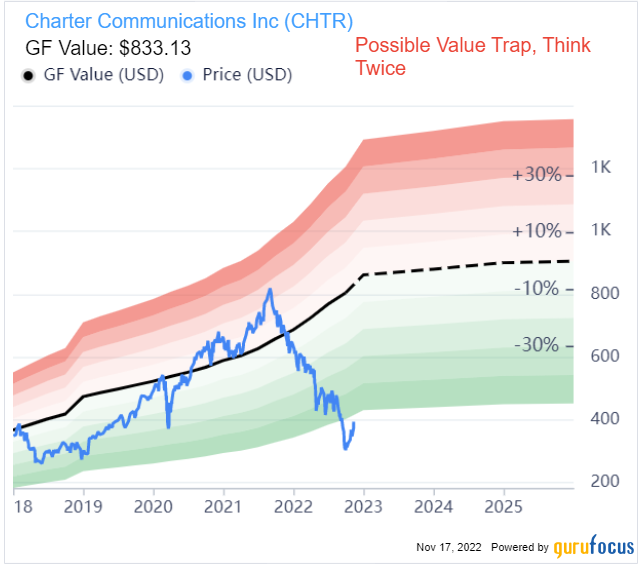 Both Aerojet and Charter Communications are two very interesting businesses. I personally prefer Aerojet the most as it manufactures best-in-class rockets, which should benefit from increased defense budgets. In addition, the attempted acquisition by Lockheed Martin acts as a seal of approval.

Charter Communications is also an interesting company due to its position as an internet provider, but it a slightly more contrarian play due to the high debt levels.