Seth Klarman (Trades, Portfolio) is the founder and portfolio manager of the Baupost Group, a hedge fund with $5.79 billion in assets under management. His investment strategy uses traditional value investing principles such as buying a stock below its intrinsic value. Klarman even wrote a best-selling book on the subject called “Margin of Safety.”

In this discussion, I will dive into two stocks Klarman loaded up on in the third quarter of 2022. Let’s dive in.

In the third quarter, Klarman invested in 250,000 shares of Lithia Motors Inc. (

LAD, Financial). The stock traded at an average price of $261 per share during the quarter, which is slightly more expensive than where it traded at the time of writing. 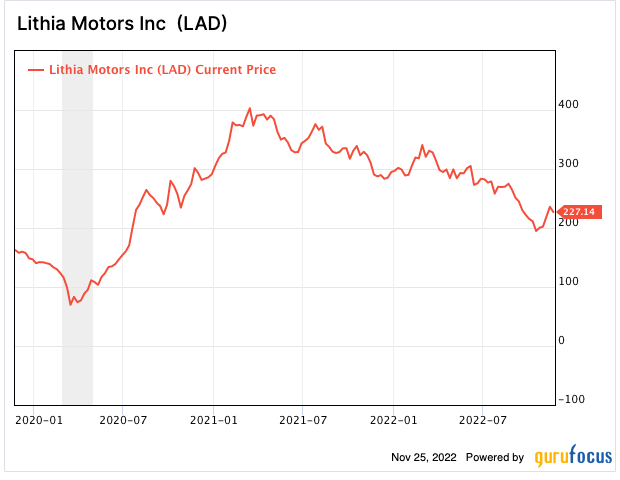 What does the company do?

Lithia Motors is the third-largest new vehicle automotive dealership in the U.S. The company operates 267 stores across 24 states as well as 14 locations in Canada. In addition, the company has a solid online presence that offers users options for pickup and delivery of vehicles.

The goal of the business is to offer customers solutions across their entire lifecycle, from shopping for a new car to repairs, maintenance and selling. To accomplish this, the company has bold plans to consolidate the fragmented auto dealership industry and offer a variety of vertically integrated solutions. For example, the business is gradually extending its offering to include consumer insurance, business fleet leasing, electric vehicle charging, trucking, agriculture and much more.

Lithia Motors is growing via strong merger and acquisition activity. The business aims to reach 95% of U.S consumers within 100 miles, which will be an improvement over the 250-mile radius currently. In addition, it is building out a network of 400 to 500 stores for the luxury and import market.

On the buying side, the company's Driveway product offers customers an instant cash payment for their vehicle, which is fairly unique in the industry. 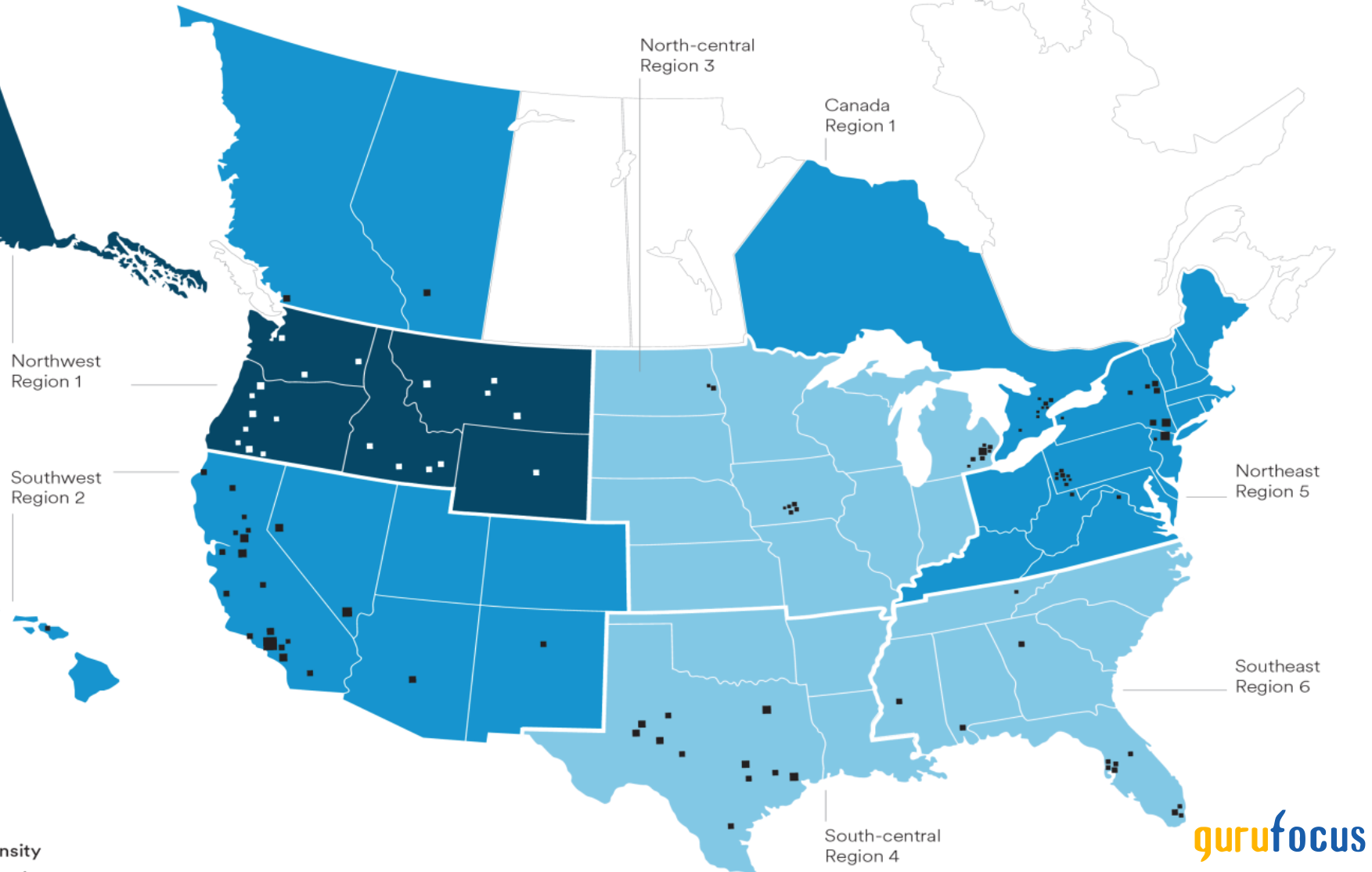 Lithia Motors reported solid financial results for the third quarter in October. Revenue of $7.3 billion increased 18% year over year despite the tough macroeconomic environment. This was driven by solid service body and parts revenue, which increased 10% year over year.

The company’s new e-commerce platform, Driveway, has also achieved strong adoption, with digital customer traffic increasing 35% year over year. The company’s “GreenCars” Solution has also proven to be popular as it educates customers on eligible incentives and tax credits for purchasing an environmentally friendly vehicle. 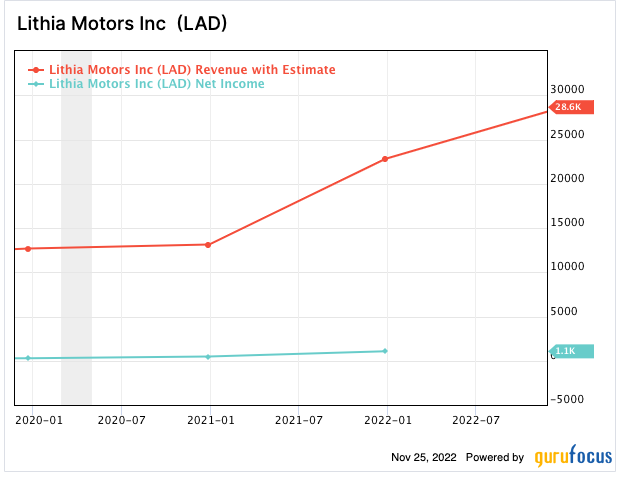 Lithia reported earnings per share of $11.08, up from $10.21 in the prior-year quarter. Foreign currency did act as a negative headwind, which reduced earnings by 54 cents, but results were still solid.

Management is extremely bullish on the future prospects of the business and has expanded its stock buyback program to $450 million. Year to date, the business has bought back a staggering 2.4 million shares, equating to 8% of outstanding shares, at an average price of $276 each. 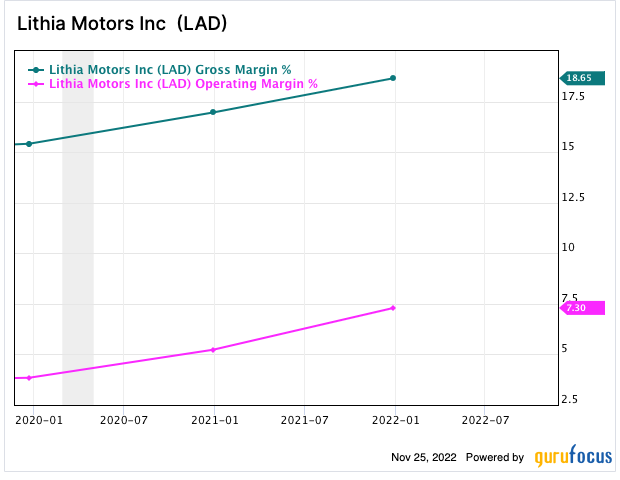 The company has a solid balance sheet with $233 million in cash and short-term investments. However, it does have fairly high long-term debt of $5.3 billion, which should be taken into account. The good news is short-term debt equates to just $113 million.

Lithia Motors trades with a price-earnings ratio of 5, which is 54% cheaper than its five-year average. Given the average price-earnings ratio for the S&P 500 is around 19 (after a big decline), this is extremely cheap. Therefore, it is not a surprise to see a value investor like Klarman loading up on the stock. 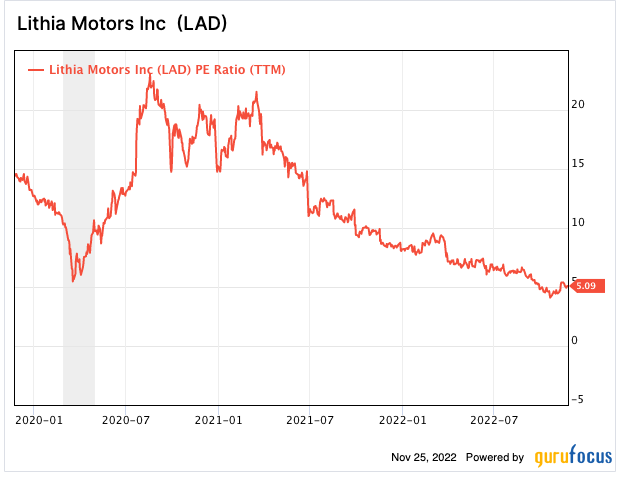 The GF Value Line also indicates a fair value of $411 per share, which means the stock is deeply undervalued based on historical ratios, past financial performance and analysts' future earnings estimates. However, the chart does warn of a possible value trap that could have been driven by the sharp decline in share price. 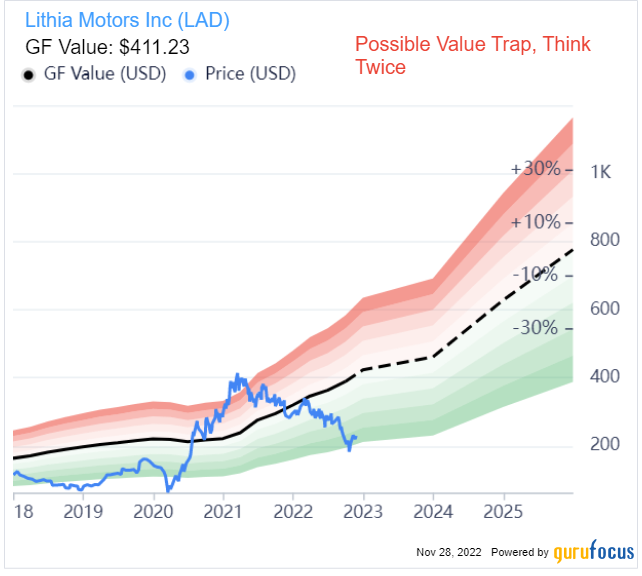 FIS, Financial), which traded at an average price of $93 per share. At the time of writing, the stock was trading around $63 per share and is, therefore, about 30% cheaper than his average buy price. 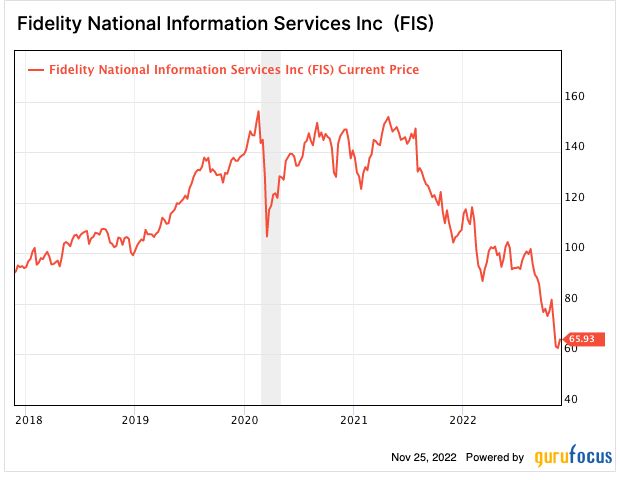 Fidelity is a global provider of financial technology solutions for merchants, banks and financial institutions. The company has an elite list of clients, which include Microsoft (

With an army of over 65,000 employees globally, Fidelity is a beast of a business. Its business model can be segmented into three parts;

The Merchant Solutions segment enables payment processing for merchants of all sizes. In 2019, the company acquired WorldPay, a leading payment gateway provider, to help bolster this part of the business.

Its Banking Segment provides the backbone processing software for many U.S. regional banks and lenders. For example, the company works with the Commercial Bank of California, as well as the 130-year-old National Capital Bank of Washington.

This may be how Klarman first started to gain interest in the company as his investment firm Baupost Group may have been a customer. Although this is just speculation, it would make sense as moving large sums of capital around is challenging without assistance from financial service providers.

A growing segment of the business is its Big Data and Analytics, which helps to provide clients with a range of data to help improve operations and comply with regulatory oversight.

On Nov. 8, Fidelity reported solid financial results for the third quarter despite many macroeconomic headwinds. The company reported revenue of $3.6 billion, which was in line with management’s expectations but only increased 5% year over year. The Banking Solutions segment was a key growth driver, increasing revenue by 6% year over year. Further, the Merchant Solutions segment's revenue increased 5%, while the Capital Markets segment's sales grew 6%. 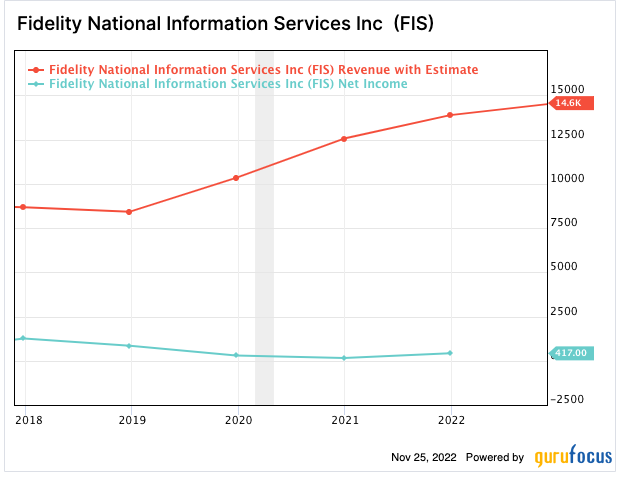 The business did experience issues with profitability as its adjusted Ebitda margin was squeezed 150 basis points year over year. Management noted this was mainly due to wage inflation, supplier cost increases and consumer weakness in the U.K., where many of its clients operate.

Earnings per share of 41 cents missed analysts' expectations by 13 cents.

Despite the challenges, management reaffirmed its commitment to 20% annual dividend growth and a 35% payout target. The company has a dividend yield of 2.85%, which is fairly high relative to the fintech industry. 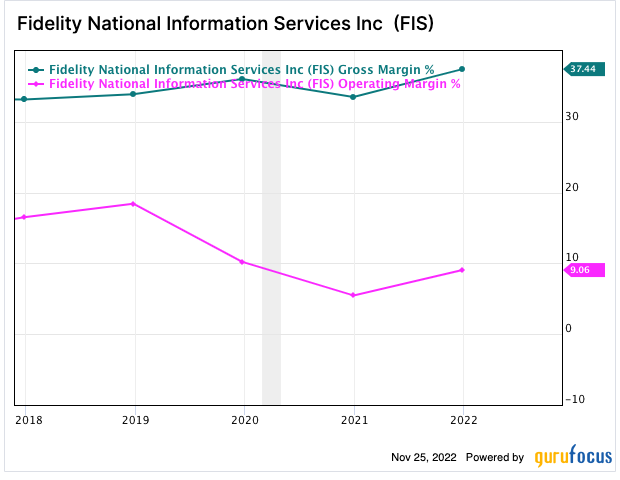 Fidelity trades at a price-earnings ratio of 9.87, which is 50% cheaper than its five-year average. Therefore, even though the business is facing challenges, its cheap share price is enticing to value investors such as Klarman. 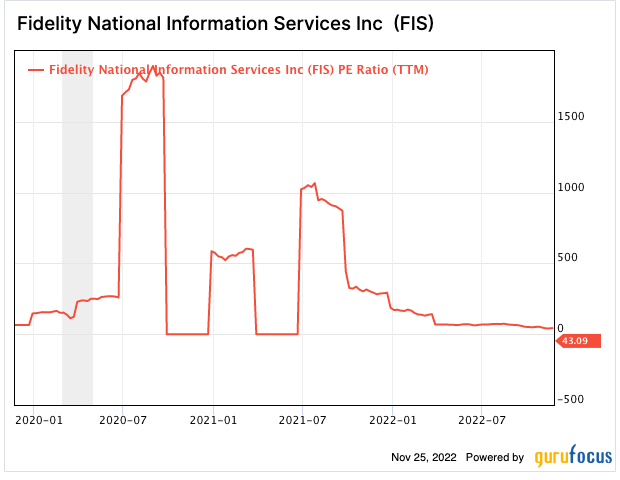 The GF Value Line also indicates a fair value of $139 per share, which is cheaper than historic levels. 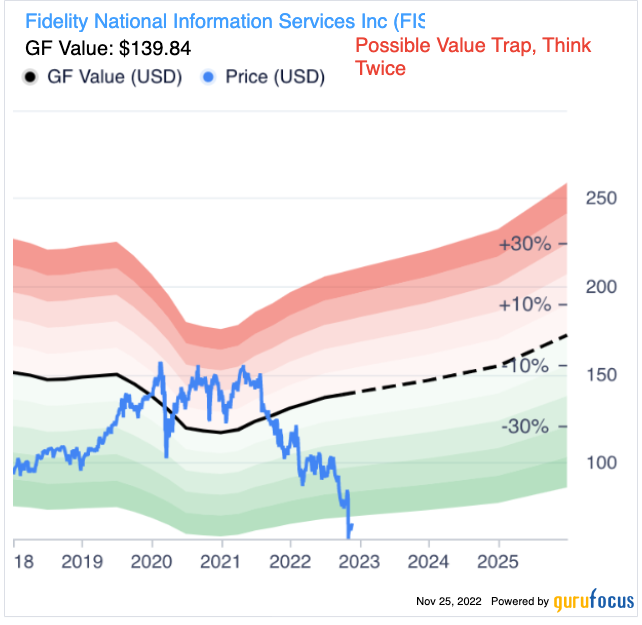 Lithia Motors and Fidelity are very different companies in very different industries. However, they do have one thing in common, which is that they are both deeply undervalued intrinsically.

The two stocks will continue to face short-term headwinds as people put off new car purchases and financial transactions slow due to the macroeconomic environment. But in the longer term, recovery should be positive.

My personal favorite out of the two is Fidelity as it is more diversified with stable and large customers.