David Herro Loads Up on 4 International Stocks in 3rd Quarter

The guru, who also manages the Chicago-based firm’s International Small Cap and Global Select funds, searches for value opportunities among foreign mid- and large-cap companies that are trading at a significant discount to his estimate of intrinsic value. His goal is to generate long-term capital appreciation by patiently waiting for the gap between the stock price and intrinsic value to close.

In his quarterly market commentary, Herro identified three macro events that impacted global equity prices: the war in Ukraine, rising inflation and interest rates and economic uncertainty in China as a result of the Covid-19 lockdowns.

“In addition, European equities have been impacted by weak local market price performance, and the total return has been negatively impacted by the strong U.S. dollar, causing a negative currency impact,” he wrote. “As a result, both of our international strategies performed poorly both on an absolute basis and relative to peers.”

Based on these developments, the NPORT-P filing showed Herro established four new positions during the three months ended Sept. 30, sold out of two stocks and added to or trimmed a slew of other existing holdings. His new positions were in DSV AS (

Investors should be aware that, just like 13F reports, NPORT-P reports do not provide a complete picture of a guru’s holdings to the public. Filed by certain mutual funds after each quarter’s end, they collect a wide variety of information on the fund for the SEC’s reference, but in general, the only information made public is in regard to long equity positions. Unlike 13Fs, they do require some disclosure for long equity positions in foreign stocks. Despite their limitations, even these limited filings can provide valuable information.

The guru invested in 1.5 million shares of DSV (

OCSE:DSV, Financial), allocating 1.07% of the equity portfolio to the stake. The stock traded for an average price of 1,084 Danish krone ($151.46) per share during the quarter.

The Danish logistics company, which offers transportation services by road, sea, air and train, has a market cap of 242.58 billion krone; its shares closed at 1,123.50 krone on Friday with a price-earnings ratio of 16.82, a price-book ratio of 3.26 and a price-sales ratio of 1.13.

The GF Value Line suggests the stock is significantly undervalued currently based on its historical ratios, past financial performance and analysts’ future earnings projections. 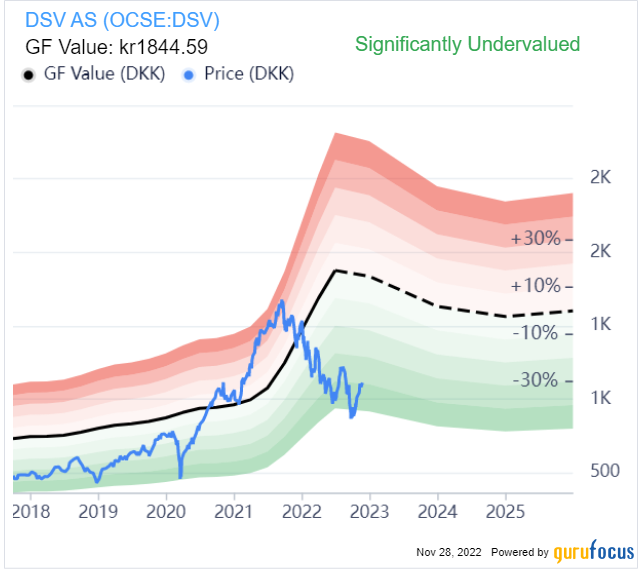 The GF Score of 94 out of 100 indicates the company has high outperformance potential, driven by good ratings for profitability, growth, GF Value and momentum as well as middling marks for financial strength. 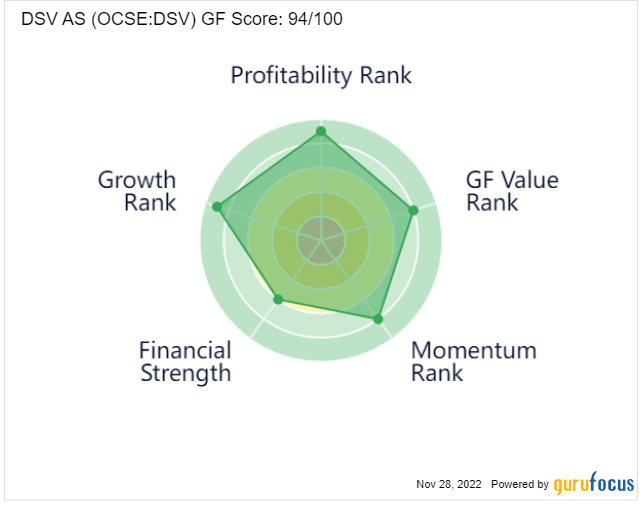 Of the gurus invested in DSV, Herro has the largest stake with 0.70% of its outstanding shares. The

After previously selling out in the second quarter of 2021, Herro picked up 3.7 million shares of Ashtead Group (

LSE:AHT, Financial), dedicating 1.01% of the equity portfolio to the stake. Shares traded for an average price of 41.92 pounds ($50.40) each during the quarter.

The industrial equipment rental company headquartered in London, which operates under the name Sunbelt Rentals, has a market cap of 22.34 billion pounds; its shares closed around 50.86 pounds on Friday with a price-earnings ratio of 21.86, a price-book ratio of 5.09 and a price-sales ratio of 3.51. 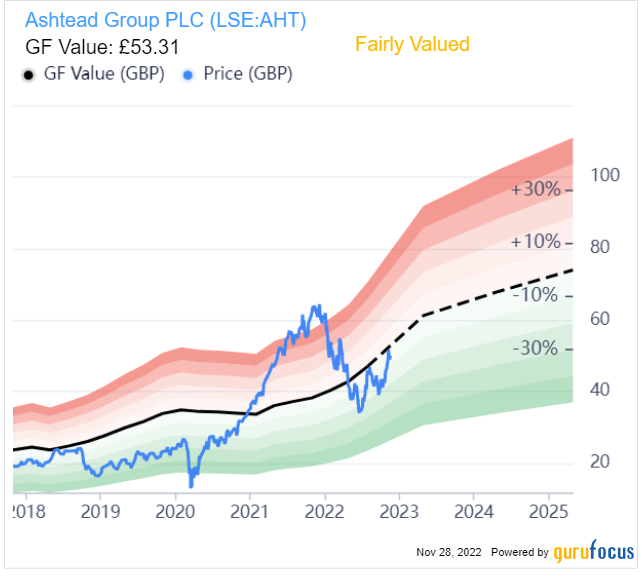 The company has high outperformance potential based on its GF Score of 93. While Ashtead raked in high ratings for profitability, growth and momentum, it got only middling marks for GF Value and financial strength. 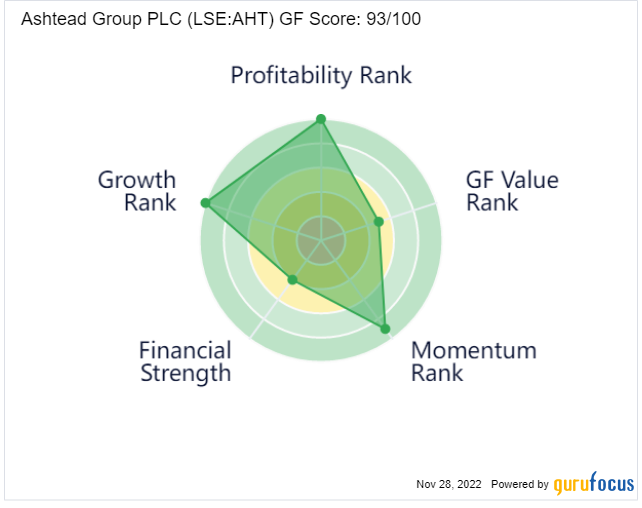 With a 0.84% stake, Herro is Ashtead’s largest guru shareholder. Other top guru investors include

The Swiss company, which manufactures escalators, moving walkways and elevators, has a market cap of 18.75 billion francs; its shares closed at 179.20 francs on Friday with a price-earnings ratio of 32.19, a price-book ratio of 4.80 and a price-sales ratio of 1.70. 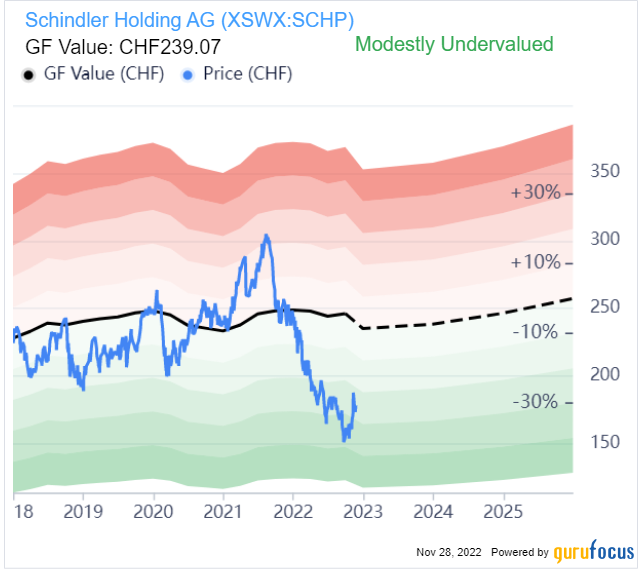 With a GF Score of 69, the company has poor future performance potential despite receiving high ratings for four of the five criteria. It did not receive a momentum rank, however, so the score may not accurately reflect Schindler’s full potential. 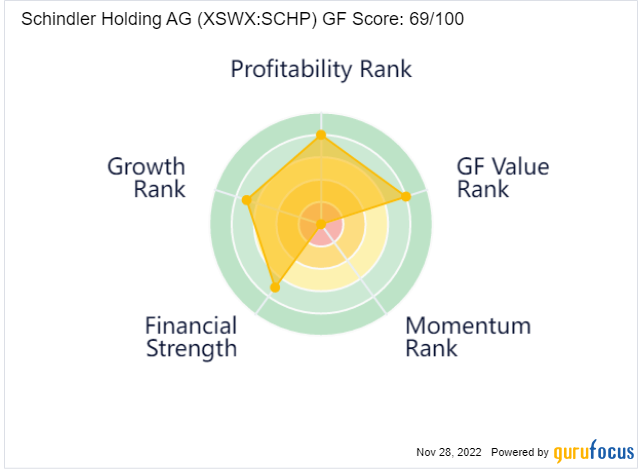 Herro is Schindler’s largest guru shareholder with 0.54% of its outstanding shares.

The Japanese software company, which provides information and communications technology equipment and services, has a market cap of 3.70 trillion yen; its shares closed at 18,825 yen on Friday with a price-earnings ratio of 18.40, a price-book ratio of 2.24 and a price-sales ratio of 1.02. 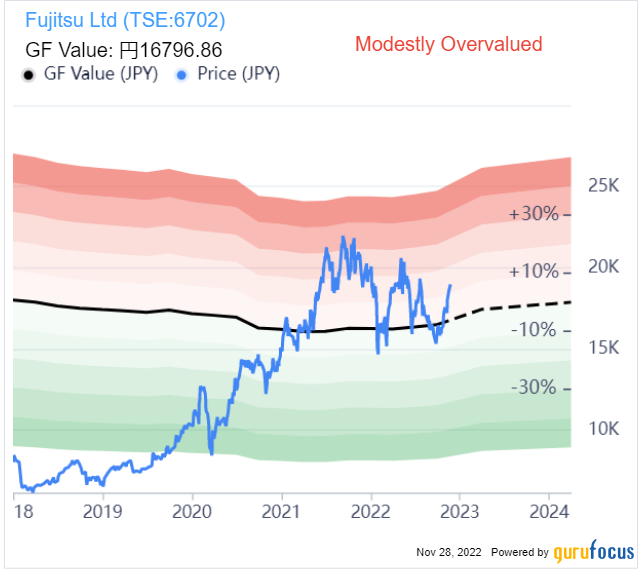 Further, the GF Score of 74 indicates the company is likely to have average performance going forward. While Fujitsu received a high rating for financial strength, it got only middling marks for the other four criteria. 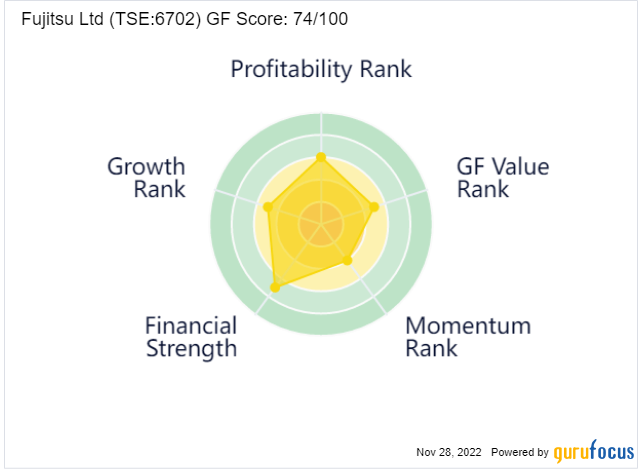 Herro is the company’s largest guru shareholder with 0.05% of its outstanding shares. The iShares MSCI ACWI ex. U.S. ETF also has a position in the stock.

During the quarter, the guru also added to its stake in Schroders PLC (

Herro’s $16.43 billion equity portfolio, which is composed of 67 stocks, is most heavily invested in the consumer cyclical and financial services sectors.