This Dividend Aristocrat's High Yield Looks Like a Safe Haven

Investors shopping for income often begin by asking if a dividend, and particularly a high one, is sustainable. It’s a logical and important question every investor should ask.

One form of assurance comes from Dividend Aristocrats. A Dividend Aristocrat is a company in the S&P 500 index that has increased its dividend every year for at least 25 consecutive years, showing consistency and dedication to shareholders.

WBA, Financial) is one of those stocks, making it part of the list of just 64 stocks that can call themselves a Dividend Aristocrat as of November 2022.

Not only is it a member of this elite group, but it is also a high-yielding stock. It offers a yield that’s more than double the November S&P 500 average of 1.69%.

The original Walgreens Company was founded in 1909. A major transformation occurred in 2014 when Walgreens combined with Boots Alliance. Today, it operates in over 13,000 locations in nine countries. Its major retail and business brands are Walgreens, Boots and Duane Reade. In addition, it has global health and beauty product brands, including No7, NICE!, Soap & Glory, Finest Nutrition, Liz Earle, Botanics, Sleek MakeUP and YourGoodSkin. Based in Deerfield, Illinois, it has a market cap of $35.29 billion and had revenue of $132.703 billion in the fiscal year that ended on Aug. 31, 2022.

Behind its revenue growth lies a series of acquisitions. These three acquisitions were finalized in the past 13 months, showing the company is still working on growing:

One other transaction is worth attention. In May 2022, the company sold 6 million shares of AmerisourceBergen Corporation (

ABC, Financial) for $900 million. That reduced its holding to 52,854,867 shares. Following up, it dumped another 10 million shares on Nov. 7, 2022. It has these shares because it previously sold its Alliance Healthcare wholesale business to AmerisourceBergen.

In the annual report, Walgreens Boots Alliance characterized its competitive environment as follows: “All of our businesses face intense competition from multiple existing and new businesses, some of which are aggressively expanding in markets we serve.” 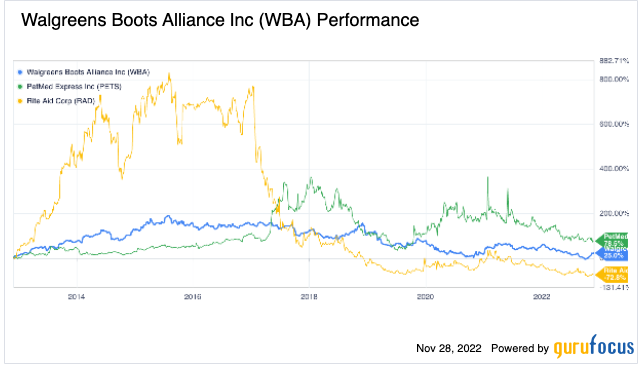 Next, let's take a look at the company's fundamentals, which investors can find on its helpful GuruFocus stock summary page.

It has been costly for Walgreens Boots Alliance to make the above-mentioned acquisitions, despite the sale of Alliance Health, which has negatively impacted its financial strength. At the close of its latest fiscal year, on Aug. 31, it had cash, cash equivalents and marketable securities of $2.472 billion. On the other side of the ledger, it had short- and long-term debt of $11.65 billion. While the interest coverage ratio is lower than many would like, it does have a high Piotroski F-Score and safe Altman Z-Score.

The profitability rank is better. Its operating and net margins are still positive but are otherwise terrible. The gross margin is well below average for the health care providers and services industry. However, there’s positive news in seeing the company has been profitable every year in the past decade. 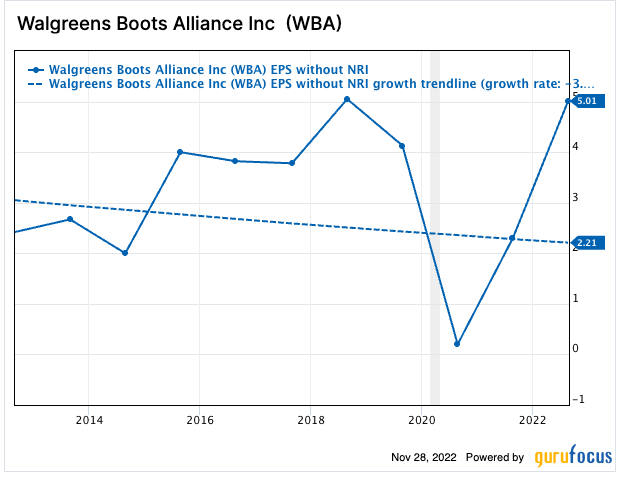 After being walloped in the early months of Covid-19, the company has since recovered.

As the following 10-year chart shows, Walgreens Boots Alliance is on a long-term decline, a condition that began back in 2015: 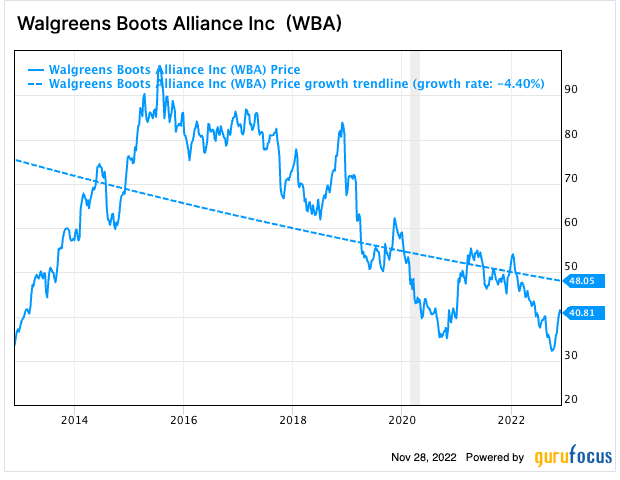 Perhaps the slide in the share price reflects the company’s highly unpredictable earnings, growing debt or failure to show significant enough growth to justify the acquisitions.

The price-earnings ratio is low at 8.16. The GF Value chart considers the company to be modestly undervalued. 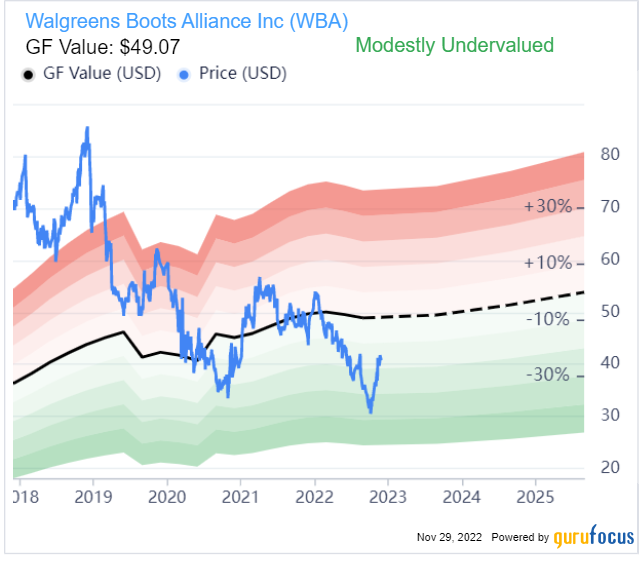 Thanks to that long-suffering share price, the dividend has become attractive:

The company is a Dividend Aristocrat, with 46 consecutive years of dividend increases according to Dividend.com. For several years now, the dividend yield has been the only thing going for Walgreens Boots Alliance stock. I’m quite sure management will do absolutely everything it can to continue those increases.

What’s more, the dividend is likely safe because the company may have a red-ink balance sheet now, but I have faith that its acquisitions will increase its revenue and earnings power in the coming years.

The company also has been relatively aggressive in buying back its own shares, averaging a reduction of 3.37% per year over the past five years. The board of directors has signaled its confidence by not only making major acquisitions but also by repurchasing its own shares.

What do the gurus think?

Ten of the 12 gurus followed by GuruFocus who owned Walgreens Boots Alliance at the end of the third quarter added to their positions.

For income investors, Walgreens Boots Alliance is a company worth considering in my opinion. It has a rich dividend, one that should be sustainable and keep growing. While the company’s other fundamentals may not be inspiring, they are robust enough to maintain shareholder returns.