According to GuruFocus’ Guru Scoreboard, where users can sort investing gurus based on their performances over specific periods of time, one of the top-performing gurus of all time is

Warren Buffett (Trades, Portfolio), who has grown Berkshire Hathaway (BRK.A)(BRK.B) at an average rate of 18.80% per year since 1980. Buffett is well-known not only for his investing expertise, but also for turning Berkshire from a struggling textile business to an incredibly well-run conglomerate of successful cash-generating businesses.

Another remarkable fund manager is

Ron Baron (Trades, Portfolio), whose Baron Partners Fund has achieved 16.80% annualized returns since 1992. The fund’s top 10 holdings have done even better, gaining 27.90% per year for the past decade and marking the best top 10 performance of all gurus followed by GuruFocus.

While these gurus may have used different investing strategies to achieve their incredible results, there are some stocks they agree on. Their latest 13F reports reveal both gurus hold shares of tech stocks Snowflake Inc. (

SNOW, Financial) counts Buffett’s Berkshire as its top guru investor with 6,125,376 shares, representing 1.91% of total shares outstanding. Buffett’s firm bought shares when the stock first went public in the third quarter of 2020 and has held on since then.

Snowflake has carved a unique niche for itself by offering data warehousing that is cloud native. All of Snowflake’s components can run on public cloud infrastructure built by Alphabet’s (

The company’s direct competitors are mainly subsidiaries of tech giants, such as Amazon’s Redshift and Alphabet’s BigQuery. Two consistent ways that Snowflake differentiates itself are via instant scaling and more automated maintenance, though it does lose out on the more natural integration of cybersecurity solutions that some of the big tech giants offer. Snowflake and BigQuery have solidified themselves as the industry leaders, and customer preference between these two often boils down to the specific company needs. Fixed capacity competitors like Teradata (

TDC, Financial), which require customers to restructure systems with additional hardware and upgrades in order to increase capacity, will likely still have their use-cases, though the general trend is overwhelmingly for the cloud.

Snowflake is not currently profitable and analysts are not expecting earnings to turn positive until at least 2026, but the stock is cheaper than it used to be as shares are about $100 lower than the initial listing price.

Baron owned 660,068 shares as of the third quarter’s end, or 0.62% of total shares outstanding. After initially buying shares in the first quarter of 2013, the guru has been regularly buying and selling a small number of shares throughout the years.

Investors often overlook this stock because it falls into what Peter Lynch might call the “boring businesses” category. There is nothing particularly enticing about making sure the internet keeps running as it needs to on the daily, especially compared to the much more exciting parts of the tech world like artificial intelligence.

On the bright side, the boring nature of its business means VeriSign looks undervalued despite boasting top and bottom-line growth rates that have been incredibly consistent over time in the high single-digits and low-teens, and it is very profitable with an operating margin of 65.88%. The GF Value chart rates the stock as modestly undervalued. 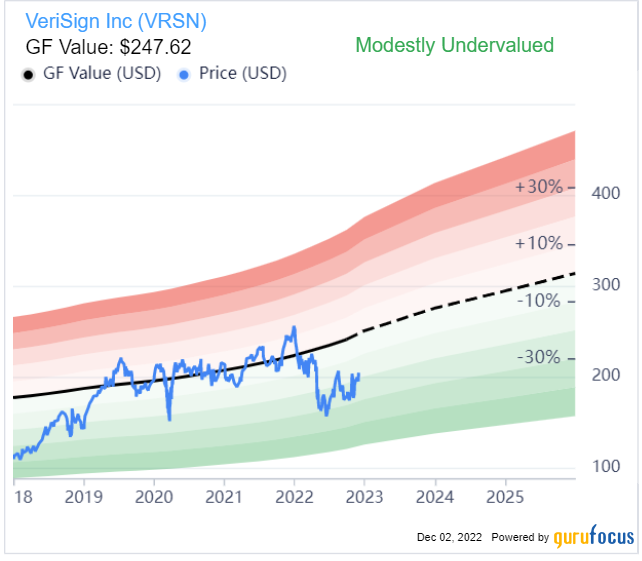 TSM, Financial), was a new addition to Buffett’s portfolio in the third quarter. The guru initiated a stake worth 60,060,880 shares, representing 1.16% of shares outstanding.

Baron, meanwhile, has held the stock since the second quarter of 2013. He started out small and gradually increased the investment over time, though he has trimmed it slightly in recent quarters, ending the third quarter with 3,649,901 shares (which equates to 0.07% of total shares outstanding).

Taiwan Semiconductor is the uncontested leader in the global semiconductor production market, making approximately 50% of the world’s chips and around 90% of its advanced chips. Its process leadership, lower costs and other economies of scale give it enormous competitive advantages. Taiwan Semiconductor and Samsung Electronics (

XKRX:005930, Financial) are the only companies in the world that can produce 5nm chips at scale, and while Samsung has won the race to 3nm production, Taiwan Semiconductor plans to begin producing a 3nm node in the fourth quarter of 2022.

Those unfamiliar with semiconductor production might be confused as to how one company gained such an iron grip over the industry. The thing is, there are so many steps in chip production that even a small error or inefficiency in the process can drastically reduce the success rate of finished products. This has a compounding effect down the line and means the company with the best process is able to create far more product at a much lower cost, attracting customers in droves. Those worried about geopolitical risks may find it reassuring that the company has purchased a property in Arizona and plans to produce 3nm chips there in order to allay the fears of its U.S. customers.

Taiwan Semiconductor’s stock got pricey for a while, but as the chip shortage begins turning into a glut in certain markets and investors continue selling off tech stocks, it has become significantly undervalued based on the GF Value chart. 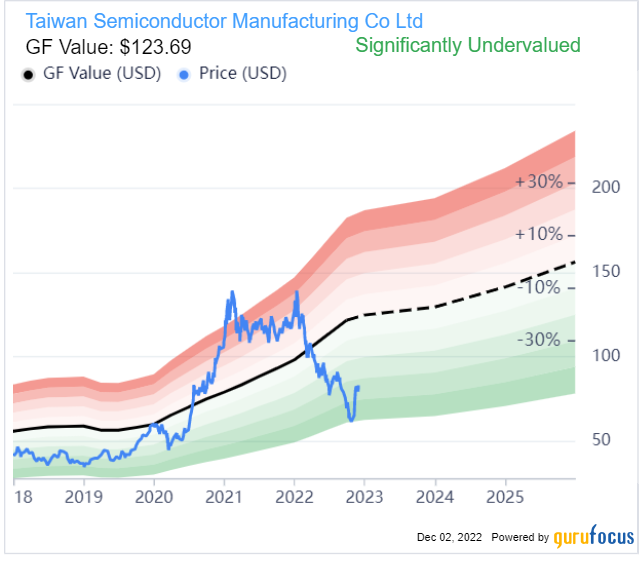