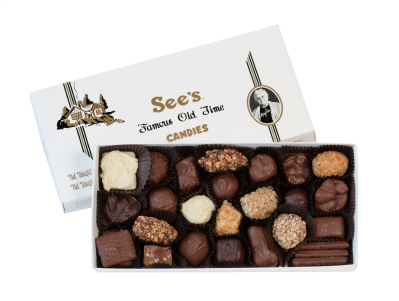 The year 1972 was good for Berkshire Hathaway (BRK.B): Book value per share increased by 22% (nearly three times the increase in the S&P 500), the insurance operations reported a significant underwriting gain, and Blue Chips purchased a controlling stake in See’s Candy.

Ironically, the See’s Candy purchase, one of the most important deals in Warren Buffett ’s career, garnered little attention at the time: Buffett’s first letter to shareholders after the purchase, dated March 1973, didn’t even mention the candy store. The following year was much of the same.

While Buffett was quiet at the time, we’ve heard much about See’s since then. He talked about the company in detail a few years ago, saying the following in his 2007 letter to shareholders:

“Let’s look at the prototype of a dream business, our own See’s Candy. The boxed-chocolates industry in which it operates is unexciting: Per-capita consumption in the U.S. is extremely low and doesn’t grow. Many once-important brands have disappeared, and only three companies have earned more than token profits over the last forty years. Indeed, I believe that See’s, though it obtains the bulk of its revenues from only a few states, accounts for nearly half of the entire industry’s earnings.

At See’s, annual sales were 16 million pounds of candy when Blue Chip Stamps purchased the company in 1972. (Charlie and I controlled Blue Chip at the time and later merged it into Berkshire.) Last year See’s sold 31 million pounds, a growth rate of only 2% annually. Yet its durable competitive advantage, built by the See’s family over a 50-year period, and strengthened subsequently by Chuck Huggins and Brad Kinstler, has produced extraordinary results for Berkshire.”

Let's take a closer look at this transaction: See’s was purchased for $25 million, or more than three times net tangible assets ($8 million). At the time, the business had sales of $30 million and pre-tax earnings of less than $5 million (the purchase price was 15X after-tax operating profit of $2 million).

Looking at volumes, we can see that life as a Blue Chips subsidiary was relatively uneventful: In 1972, See’s sold just shy of 17 million pounds. A decade later, the business did slightly more than 24 million pounds – good for a 10-year compounded annual growth rate of just 3.5%:

In addition, the company was expanding its store base over this period; from 1972 to 1982, the number of stores open increased from 167 to 202 – or nearly 2% per annum. After adjusting for that fact, volume growth on a per-store basis was essentially nonexistent. That isn't the result you're hoping for after a major acquisition.

Volume data, however, isn’t worth much when presented in a vacuum. The value of the See’s brand starts to surface when we step back and take a look at the broader picture. While volume growth was limping along, top-line growth was on fire. Over the same period discussed above, sales increased from $31 million to $124 million – for a 10-year CAGR of 15%. What accounted for the divergence in these two measures? The price charged per pound of candy:

In the 12 years from 1972 to 1984, the price of See’s Candy on a per pound basis increased nearly 10% per annum. Even after considering outsized inflation at a rate of roughly 7% per annum in the 1970s, the price increase per pound is substantial. Yet over that same period, volume fell in just a single year (1981), and by an infinitesimal amount:

The ability to increase prices significantly above the rate of inflation, all while continuing to drive volume growth, drove every metric higher. The per-store economics shot the lights out:

The $2 million in after-tax operating profit reported in 1972 was up nearly 6x a decade later:

Not surprisingly (considering the volume data I presented earlier), the profit per pound increase was the primary driver of (and closely matched) the explosion in after-tax operating profits:

Buffett discussed his original thoughts to students at the University of Florida in 1998:

“When we looked at that business - basically, my partner, Charlie, and I, we needed to decide if there was some untapped pricing power there - whether that $1.95 box of candy could sell for $2 to $2.25. If it could sell for $2.25 or another $0.30 per pound that was $4.8 million on 16 million pounds. Which on a $25 million purchase price was fine. We never hired a consultant in our lives; our idea of consulting was to go out and buy a box of candy and eat it. What we did know was that they had share of mind in California. There was something special. Every person in California has something in mind about See’s Candy and overwhelmingly it was favorable. They had taken a box on Valentine’s Day to some girl and she had kissed him. If she slapped him, we would have no business. As long as she kisses him, that is what we want in their minds. See’s Candy means getting kissed. If we can get that in the minds of people, we can raise prices. I bought it in 1972, and every year I have raised prices on December 26th, the day after Christmas, because we sell a lot on Christmas. In fact, we will make $60 million this year. We will make $2 per pound on 30 million pounds. Same business, same formulas, same everything - $60 million bucks and it still doesn’t take any capital.”

By the way, a pound of assorted chocolates (a top seller) is listed on See's website for $17.50 per pound; if we start from the 1982 price of roughly $5 per pound, we can see that the increase per pound in price over the past 30 years has exceeded 4% per annum - well above the rate of inflation reported over that same period (approximately 3%). Let’s finish with an update on more recent results (again, from the 2007 letter):

“Last year See’s sales were $383 million, and pre-tax profits were $82 million. The capital now required to run the business is $40 million [for an ROIC north of 200%]. This means we have had to reinvest only $32 million since 1972 to handle the modest physical growth – and somewhat immodest financial growth – of the business. In the meantime pre-tax earnings have totaled $1.35 billion. All of that, except for the $32 million, has been sent to Berkshire (or, in the early years, to Blue Chip). After paying corporate taxes on the profits, we have used the rest to buy other attractive businesses. Just as Adam and Eve kick-started an activity that led to six billion humans, See’s has given birth to multiple new streams of cash for us.”

See’s Candy had something that couldn’t be captured or quantified on a balance sheet, and proved to be worth multiples of its net asset value (and substantially more than the purchase price that Buffett and Munger almost walked away from). Five decades later, the imprint of this deal can be seen throughout Berkshire; See’s is the foundation upon which Coca-Cola (KO), Heinz and others stand today.
Also check out:
Not a Premium Member of GuruFocus? Sign up for a free 7-day trial here.
Rating: 4 / 5 (34 votes)
3 Comments
Write for GuruFocus
Submit an article
How to use GuruFocus - Tutorials What Is in the GuruFocus Premium Membership? A DIY Guide on How to Invest Using Guru Strategies GuruFocus New Features