Stock jump after 3rd quarter earnings might well be an anomaly

The first iPhone was launched in 2007 by Steve Jobs. Nine years and 13 models later, Apple (

Apple released its third-quarter earnings on July 26, beat Wall Street estimates by a mile, sold a lot more iPhone SEs than anticipated and was subsequently rewarded with the stock soaring after the results came out.

But there were a few analysts who expressed caution about the improved performance of Apple, and there are a few reasons why they might be correct. Lets dig a little bit deeper into the quarterly results to identify the path forward for Apple.

"(The) iPhone has become one of the most important, world-changing and successful products in history. It's become more than a constant companion. iPhone is truly an essential part of our daily life and enables much of what we do throughout the day," said Cook. Last week we passed another major milestone when we sold the billionth iPhone. We never set out to make the most, but weve always set out to make the best products that make a difference. Thank you to everyone at Apple for helping change the world every day."Apple Blog

The second quarter was the first time in the last 13 years that Apples revenues declined and, despite the recent earnings beat, Apples sales for the current quarter was $42.358 billion, down by 14.6% compared to $49.6 billion revenue recorded last year.

So the revenue decline is yet to be arrested. In the first nine months of 2015, Apples total sales was $73.08 billion in 2015 and this year it has only made $66.45 billion, a full $6.6 billion less than it did last year. The sales decline was not a country-specific or region-specific one Apples sales declined across the world except for Japan. 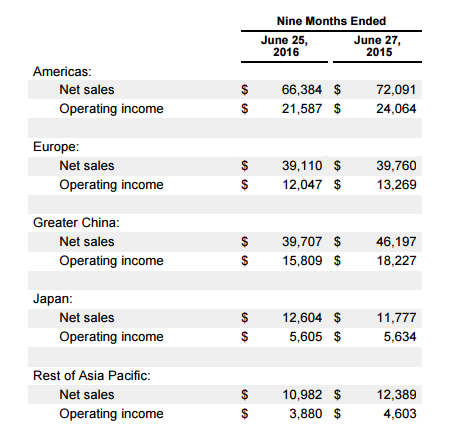 On the product side, iPad picked up some momentum during the quarter, and revenues from the tablet increased by 7%. As iPads are more expensive than iPhones, they provide better margins for the company. Although iPad revenues increased, the total number of iPads sold actually went down, which means people are buying the higher-priced ones. Thats a positive sign for the company; it will help expand its margin even though sales were 9% down from the year-ago quarter.

Services is another area where Apple has done really well and something that can help the company in the long run. The more this segment grows the better it will be for the overall health and future of Apple. As unit sales decline over time, this is the segment that can help offset that.

Sales of iPhones are responsible for more than 50% of Apples revenues, and this is the segment that will determine the companys overall performance. During the third quarter, the company started shipping iPhone SE, the low spec/low cost iPhone, which was lapped up around the world with demand outstripping supply through the quarter.

When you sell more products at a lower price point, your margins are, of course, going to take a bit of of a hit. The average selling price or ASP for iPhones was $595, a full $65 less on a year-over-year basis, though the company attributed $20 of the $65 to foreign exchange. Apple expects ASP to improve next quarter.

"Margins went down, they sold a lot more iPhone SEs than they had expected to, and Apple needs to be very careful of that," Moor Insights & Strategy's Patrick Moorhead told CNBC Wednesday.

The change in the product portfolio or to be more exact, the addition of low-cost models to the iPhone lineup is what analysts are warning against, saying that it might erode margins in the long run.

Though the argument does make a lot of sense, we also need to understand the markets where Apple is pushing for growth. The current high-end iPhones that cost north of $500 make great premium products in developed markets such as America and Britain, but in markets such as China and India, these are considered super-premium and something thats out of reach of average middle-class users.

In a way, they will be pricing themselves out of competition in those countries. Add the fact that there are billions of people in the region, that is a huge customer base that Apple can tap into if it can get a product that can show decent volume growth. And thats exactly what I see in the iPhone SE.

Another thing thats often missed is that the services segment is growing. By bringing in more users from developing markets, Apples services will set the tone for greater reach and a larger volume of users who will subsequently help products such as Apple Pay take off.

So, on the one side, we have a margin hit as more lower-priced iPhones make their way into the market, but it will simultaneously increase Apples user base around the world.

Right now, Apple is at a point where it has the opportunity to grow users. If it can do that while increasing revenues at the same time but lose a few percentage points on margins, it should double down on that. It could be the only way realistic way for Apple to move forward as sales and revenues continue to decline.

The stock is on a high now, but in the long run, this is the kind of strategy Apple needs to execute in order to stay relevant in its declining phase.

Disclosure: I have no position in any of the stocks mentioned and no intention to initiate any position in the next 72 hours.