"Price is what you pay. Value is what you get." What Warren Buffett really meant: The principles of Valuation, Historical Proofs - Part 1.

Chuck Carnevale
Dec 03, 2010
Bookmark
Why have these three stocks historically commanded approximately the same True Worth™ price earnings ratio? SCANA Corp. (SCG, Financial), a public utility, has a historical earnings growth rate averaging 3.2% per annum, VF Corp. (VFC, Financial), an apparel manufacturer, has a historical earnings growth rate averaging 7.4%, and United Technologies Corp. (UTX, Financial), an aerospace and technology conglomerate, has a historical earnings growth rate averaging 13.3%. Even with such wide discrepancies in growth, each indicate an implied fair value PE ratio of 15.
The following price and earnings correlated F.A.S.T. Graphs™ and accompanying performance charts illustrate this point. However, note that even though their intrinsic values are represented to be similar, the rates of return their shareholders have received had differed greatly. So the question is, with such different rates of earnings growth, how do you justify all of them having the same fair value calculation? The remainder of this article will deal with answering this important question.
(SCG, Financial):15 year earnings and price correlated F.A.S.T. Graph™
The orange earnings justified valuation line on Scana Corp. (SCG, Financial) calculates out at a PE ratio 14.9 (15 rounded) utilizing Ben Graham's famous formula for valuing a business. The PE ratio is marked in orange to the right of the graph with the letters GDF (Graham Dodd formula) in orange which is color-coded to the line.

Note how the stock price has tracked the earnings line over time. Anytime the black price line is below earnings, it tends to move up towards the earnings line and vice versa. The blue shaded area represents dividends paid out of earnings. Therefore, an investor behaving rationally might not want to pay anything over 15 times earnings, and probably less, before they bought this company. The main point is that the orange line represents a good barometer for value. 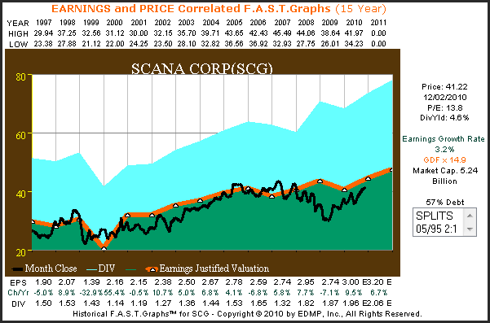 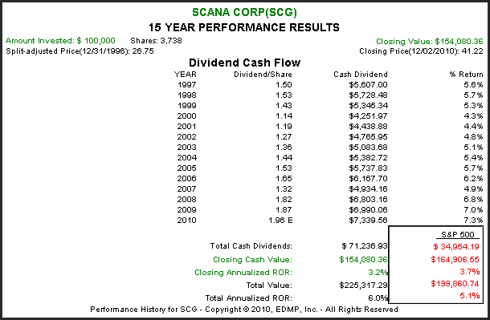 (VFC, Financial): 15 year earnings and price correlated F.A.S.T. Graph™
VF Corporation (VFC, Financial) also shows their stock price closely tracking the orange earnings justified valuation line, which at 15 times earnings, is the same as SCANA above, even though their earnings growth rate is more than twice as fast at 7.4%. The earnings justified valuation line on this company is calculated utilizing a modified version of Ben Graham's famous formula and the PEG ratio formula that applies to fast-growing companies (15% earnings growth or better).
This graph is marked by orange letters, color-coded to the earnings line of GDF-EDMP indicating the use of this different formula. Once again we see that whenever price gets above the valuation line it soon moves back to it, and vice-versa. Just like with SCANA Corp., a rational investor considering VF Corporation would not want to pay more than 15 times earnings to buy it. If they could pay less, a case can be made that it would be a bargain. 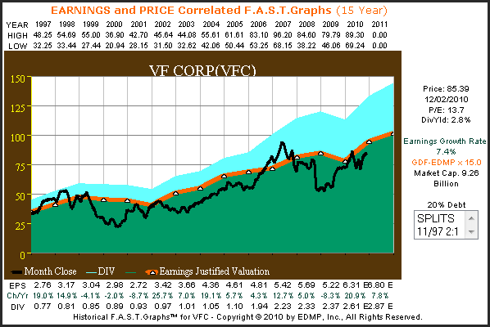 Shareholder Closing Annualized ROR (total return) on VF Corporation since 1997 of 6.9% correlates very closely to the earnings growth rate of 7.4% noted above, with only a modest adjustment based on slight undervaluation currently. Dividend income on this faster growing, but lower yielding company, grow faster and make a meaningful contribution to total return. However, notice that total dividend income is less than the total dividend paid by SCANA Corp., but total return but is greater due to faster earnings growth.
(VFC, Financial):15 year Performance Results 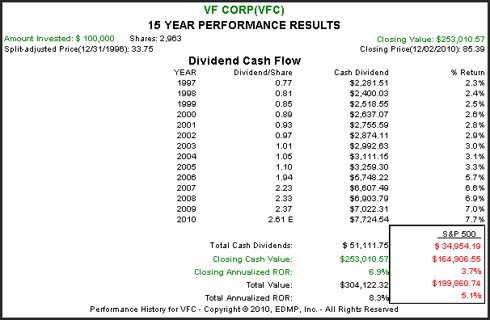 (UTX, Financial): 15 year earnings and price correlated F.A.S.T. Graph™
United Technologies Corp. (UTX, Financial) provides a third example where the fair value price earnings ratio still calculates out to be 15 times earnings, even though earnings growth at 13.3% is close to double what VF Corporation grew earnings at. However, we still use the modified GDF-EDMP valuation formula as growth remains between our 5% to 15% threshold. Once again, note how this calculation of fair value provides an intelligent barometer at which to consider investing in this company at. It may not be perfect, but it certainly serves as a good guide. 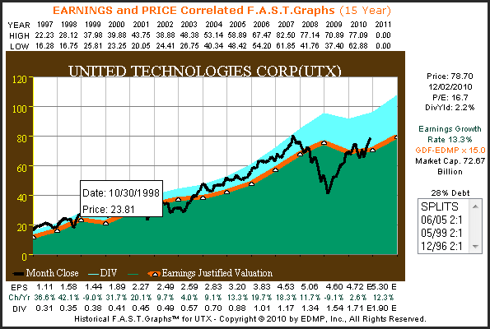 Faster earnings growth generated by United Technologies Corp. since 1997 generates a higher total return for shareholders than the previous two examples. Most importantly, the correlation between earnings growth and return is evident. Overvaluation at the beginning of this measured time frame, which is greater than the current overvaluation, accounts for the slightly lower than growth rate return. Nevertheless, the correlation is clear.
(UTX, Financial): 15 year Performance Results 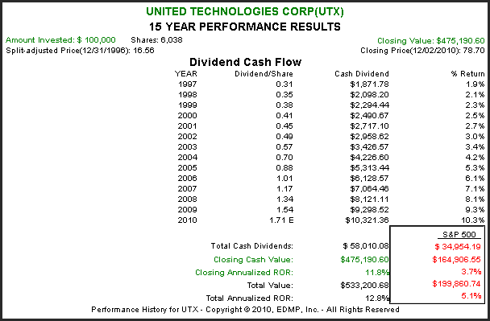 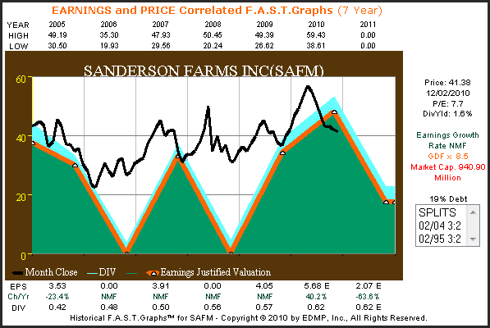 Conclusions
In this Part 1 of this three-part article on value is what you get, we attempted to lay the foundation of understanding how to value a common stock. So far we have looked at low to moderate earnings growth examples and commented on collapsing earnings which really have no value. In Part 2 we will look at companies that grow earnings at 15% or greater as we investigate the nuances of valuating this faster growth.
In both Part 1 and Part 2, we are focusing on historical evidence only, in order to establish the validity of our thesis. In other words, theories are fine but need to hold up in the real world. This is the real value that historical analysis offers, actual real world evidence that the theories hold up. In Part 3 we will change our focus and look to valuing the future. Applying the same logic that we learned from the past, should enable us to make better decisions about the future.

The opinions in this document are for informational and educational purposes only and should not be construed as a recommendation to buy or sell the stocks mentioned or to solicit transactions or clients. Past performance of the companies discussed may not continue and the companies may not achieve the earnings growth as predicted. The information in this document is believed to be accurate, but under no circumstances should a person act upon the information contained within. We do not recommend that anyone act upon any investment information without first consulting an investment advisor as to the suitability of such investments for his specific situation.