Ingles Markets: Big Earnings Per Share in a Narrow-Margin Industry 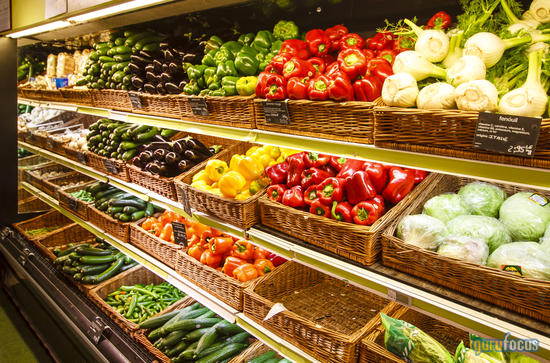 Looking for a consumer defensive stock that provides a high return on equity plus a modest dividend?

Would you be willing to pay what looks like a high price, but still have a significant margin of safety?

A stock that meets both of those criteria is Ingles Markets Inc. (

At the end of fiscal 2020 (Sept. 26), the company operated 197 supermarkets in six states, all of them within 280 miles of its warehouse and distribution facilities near Asheville, North Carolina.

In its 10-K for 2020, management argued that it has two competitive advantages. First, that it regularly renovates and remodels its stores, so they look and feel modern. Second, it has local area knowledge that helps it stay in step with the region's consumer preferences.

It was first incorporated in 1965 and has traded publicly since 1987. Although publicly traded, it remains controlled by the Ingle family. At the close of fiscal 2020, Robert P. Ingle II owned 29% of the firm's Class A and Class B common shares and controlled 76% of its combined voting power (Class B shares are not publicly listed or traded).

It has been growing its business with several tactics:

In its 10-K, Ingles lists the risk factors that could affect its operations and financial state. They include:

Like other companies in the supermarket industry, Ingles faces intense competition and narrow profit margins (at least it did until fiscal 2020): 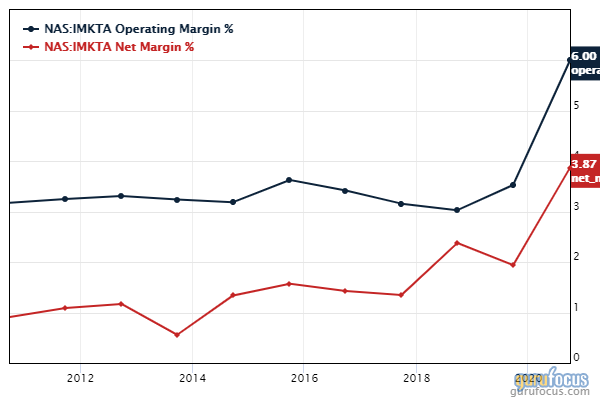 Competition varies among the company's stores, depending on the size of the communities and proximity to other communities.

In addition to local and regional stores, the company also competes with national chains such as The Kroger Co. (

A double-digit return on capital of 13.58% suggests the company enjoys one or more competitive advantages. 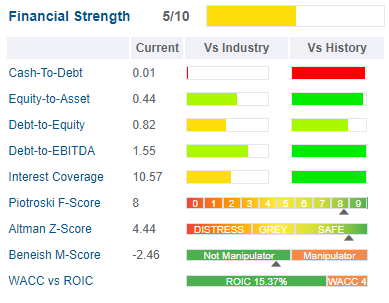 As the various ratios on the table suggest, Ingles operates with a significant amount of debt. It certainly looks formidable when seen in a chart with cash and cash equivalents:

With an interest coverage ratio of 10.57, the company generates more than enough operating income to cover its interest expenses. And Ingles Markets reported:

"The Company believes, based on its current results of operations and financial condition, that its financial resources, including cash balances, the existing Line, short- and long-term financing expected to be available to it and internally generated funds, will be sufficient to meet planned capital expenditures and working capital requirements for the foreseeable future, including any debt service requirements of additional borrowings."

According to data in its May 5 report on second-quarter and first six months results, the company is improving its debt exposure:

The Piotroski F-Score is high, indicating that management is doing a good job; the Altman Z-Score is also relatively high, suggesting the company is unlikely to get into financial trouble in at least the immediate future.

The table also shows management has invested the company's capital effectively because the return on invested capital of 15.37% is significantly higher than the weighted average cost of capital at 4.4%.

Not shown on the table is the company's free cash flow, which has also blossomed recently: 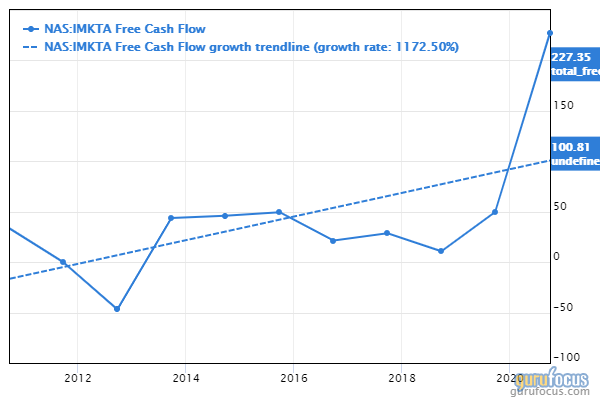 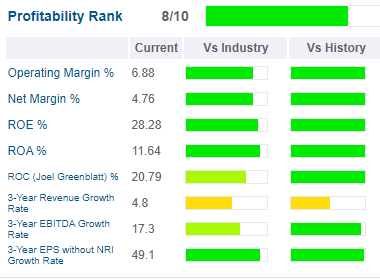 As we saw above, the operating and net margins moved higher in 2020. The table also shows us that return on equity is good; the following chart shows it has been averaging ROE growth of 10% per year: 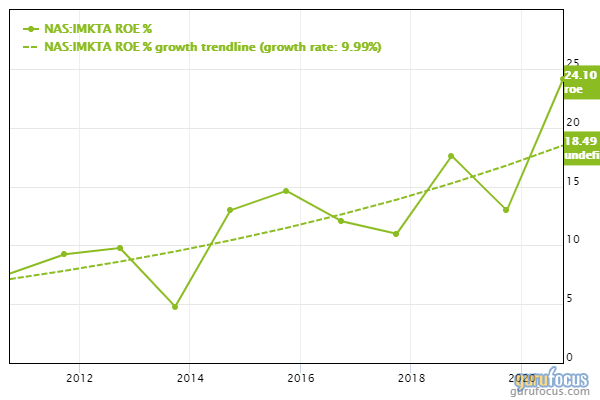 The growth lines are all positive. This chart shows how revenue has grown over the past decade: 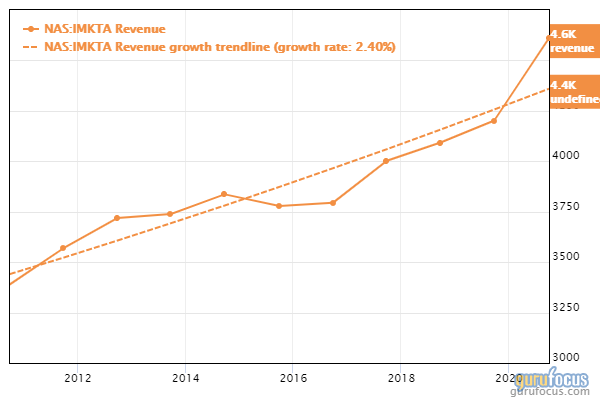 Average Ebitda growth has been even stronger: 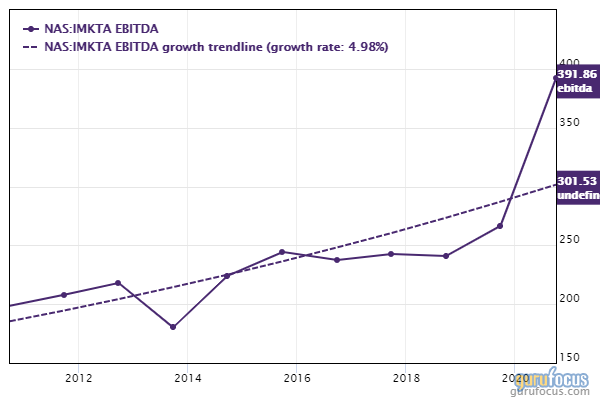 Earnings per share (diluted) growth has been very impressive: 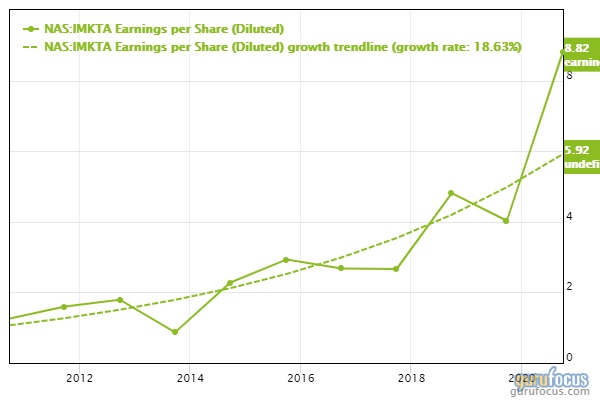 With Ebitda and earnings per share growing faster than revenue, we can assume the company is becoming increasingly effective and efficient in its operations.

That improvement shows up in these annualized returns:

Total annual returns swing from one extreme to another:

As the following chart shows, management hasn't been too sure about which way to go with its dividends per share: 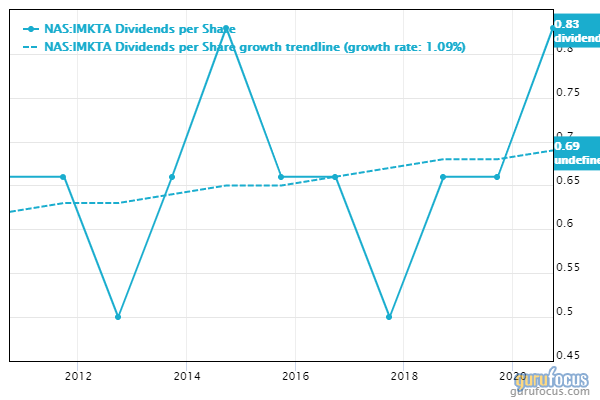 And this is how the dividend yield looks in relation to the share price: 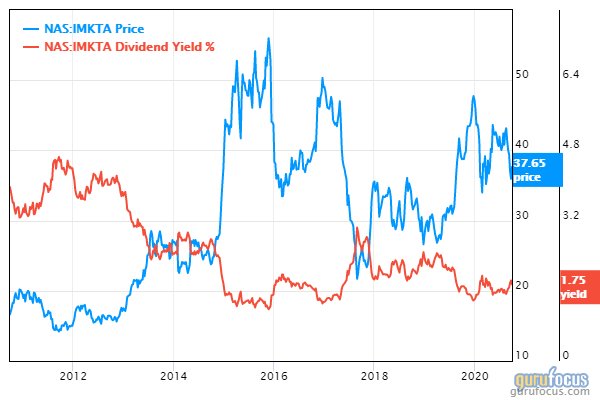 While management and the board may have gone back and forth on dividend payments, they have moved decisively to reduce the number of Class A shares: 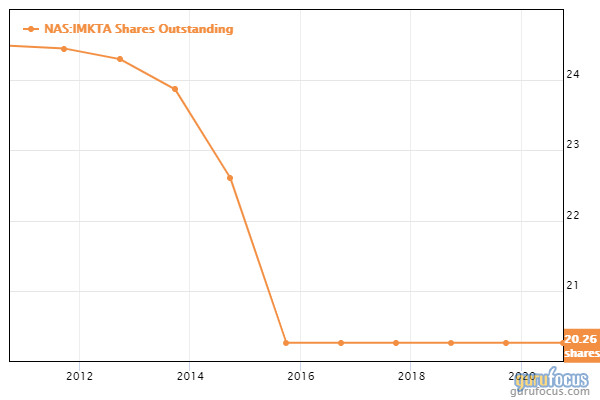 The share price has trended upward over the past decade, and especially since August 2018: 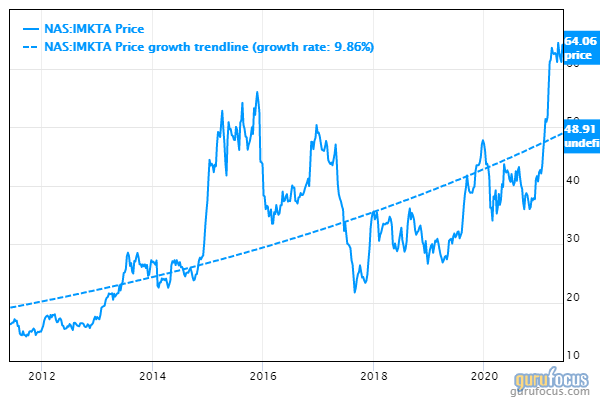 Some observers and the GF Value Line have concluded Ingles is overvalued, because its share price has grown so high since last October: 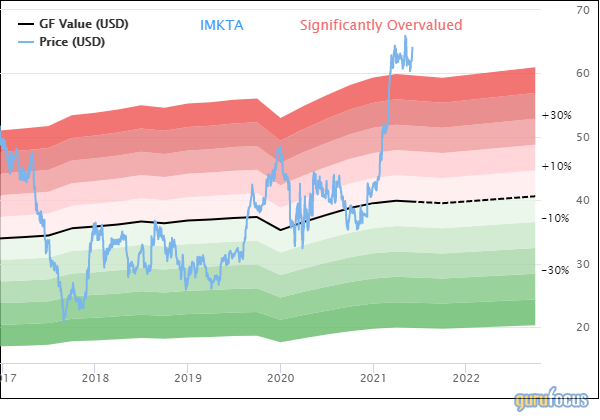 Yet, its price-earnings, ratio of 5.71 is less than a third of the Retail – Defensive industry's 18.59 median.

The rapid growth of Ebitda has given it a PEG ratio of just 0.71, well below the fair value mark of 1.00.

The discounted cash flow calculator, based on a solid four out of five stars predictability rating, also concludes it is undervalued, with a substantial margin of safety: 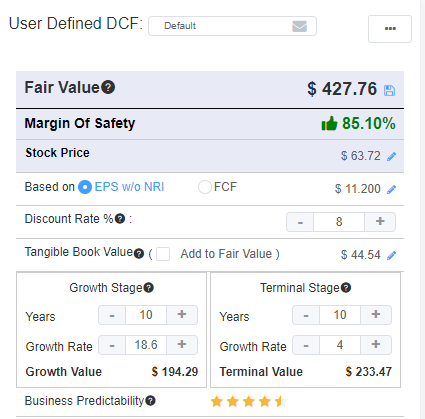 Overall, this appears to be an undervalued stock, but investors should do their own research to determine if they agree.

The gurus have been net sellers in recent quarters. Perhaps they saw the rising share price as an opportunity to take some profits:

Ten of the gurus held positions in Ingles at the end of its second quarter (March 31). The three biggest positions were those of:

Yes, the share price has skyrocketed in the past nine months, but Ingles Markets does have one of the characteristics of a value stock: a substantial margin of safety. On the other hand, the second characteristic, having a small debt load or none at all, is missing.

The company has built a successful niche for itself, and growth in free cash flow suggests it is well placed to grow the business or reward shareholders with a higher dividend or share buybacks (buybacks would be effective if investors can confirm for themselves the shares are undervalued).

Value investors may be tempted by the margin of safety, but will want to wait for the company to bring down its debt even more. Growth investors would need to ask themselves if the recent results were an anomaly or the beginning of a positive new trend. The dividend may look attractive for income investors, but the cost of buying it may be prohibitive.