At least a quarter-century of dividend growth is not easily accomplished, but these companies have done just that

There are only approximately 140 companies that have at least a quarter century of dividend growth. In this article, we will examine three Dividend Champions yielding at least 3%, which is more than double the average yield of the S&P 500 index.

CAH, Financial) is a leading medical supply distributor, providing products to more than 24,000 pharmacies and almost 90% of the hospitals in the U.S. The company generated $153 billion of revenue in fiscal year 2020 (the company’s fiscal year ends June 30) and has a market capitalization of $16.4 billion.

Cardinal Health increased its quarterly dividend by 1% to 49.08 cents per share for the upcoming July 15 payment. The company’s dividend has a compound annual growth rate of almost 9% over the last decade. Though the latest dividend increase is considerably below this average, Cardinal Health’s growth streak has now reached 34 consecutive years.

Wall Street analysts surveyed by Yahoo Finance expect Cardinal Health to earn $5.99 per share in in fiscal year 2021, resulting in a projected payout ratio of 33%. This matches the company’s average payout ratio for the last 10 years.

Despite this discount to the historical multiple, Cardinal Health is trading near its intrinsic value according to the GuruFocus Value chart: 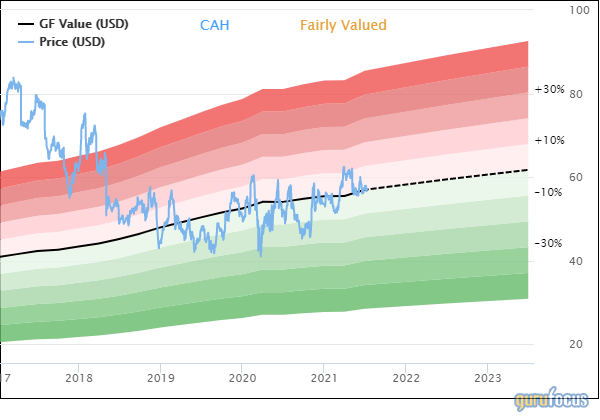 Shares have a GF Value of $57.01, giving Cardinal Health a price-to-GF-Value ratio of 1.00. The stock is rated as fairly value by GuruFocus.

Cardinal Health benefits from a leadership position in its industry. In fact, the medical supply distribution business is dominated by just three names. The company also has a very healthy payout ratio and a long history of dividend growth through multiple recessions. At the same time, healthcare tends to be one of the more recession proof industries, which has allowed shareholders of Cardinal Health to see a dividend increase for more than three decades. Shares might trade in-line with the GF Value, but the company’s industry dominance, yield and dividend growth streak could make Cardinal Health very appealing to income investors.

KO, Financial) is the world’s largest beverage company, with its brands being consumed almost two billion times per day. The company has operations in almost every country in the world. Revenue for Coca-Cola totaled $33 billion in 2020 and the company has a value of $235 billion.

Shareholders saw their quarterly dividend grow 2.4% to 42 cents per share for the April 1 distribution, giving Coca-Cola 59 years od dividend growth. The company is one of 31 Dividend Kings and has one of the longest dividend growths streaks in the market.

With an annualized dividend of $1.68, Coca-Cola has a yield of 3.1%, which matches the stock’s 10-year average yield. Investors are being paid more than twice the market index average yield to hold the stock.

The stock looks expensive using the GF Value as well: 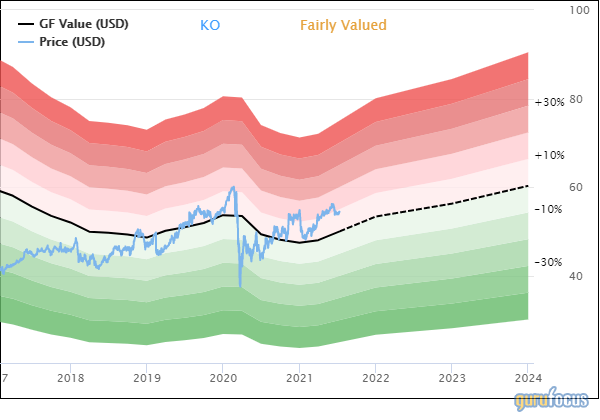 Coca-Cola has a GF Value of $49.99, giving the stock a price-to-GF-Value ration of 1.09. Shares would need to decline 8.2% to reach their intrinsic value as calculated by GuruFocus. Still, the stock is rated as fairly valued.

There is no doubting Coca-Cola’s leadership position in its industry, and the company has one of the longest dividend growth streaks found anywhere in the market. Dividend growth has slowed in recent years as a result of an elevated payout ratio, but the stock is offering a high yield compared to that of the S&P 500 index. Shares are not offering a valuation discount in any way compared to either the long-term average multiple or the GF Value. I find much of what Coca-Cola offers as an investment attractive, but I am waiting for a slightly better price before adding to my position in the name.

CTBI, Financial) operates in 35 counties spread over Kentucky, Tennessee and West Virginia. The regional bank has 84 branches and offers banking services such as deposits, lines of credit, term loans and annuity and life insurance products. Community Trust Bancorp has a market capitalization of $717 million and had revenue of nearly $206 million in 2020.

Community Trust Bancorp raised its quarterly dividend 1.3% to 38.50 cents for the Oct. 1, 2020 payment. This may not seem like an impressive increase, but remember that the major U.S. financial institutions were not granted authorization to raise their dividends last year due to the economic recession resulting from the Covid-19 pandemic. If the company keeps to its usual schedule, then shareholders should see their next dividend increase some time in the fall. Community Trust Bancorp has now raised its dividend for 40 consecutive years and has a 10-year CAGR of 3.2%.

The annualized dividend of $1.54 gives shares a yield of 3.8%, which is higher than the stock’s average yield of 3.6% for the last decade. The stock also yields nearly triple that of the market index. 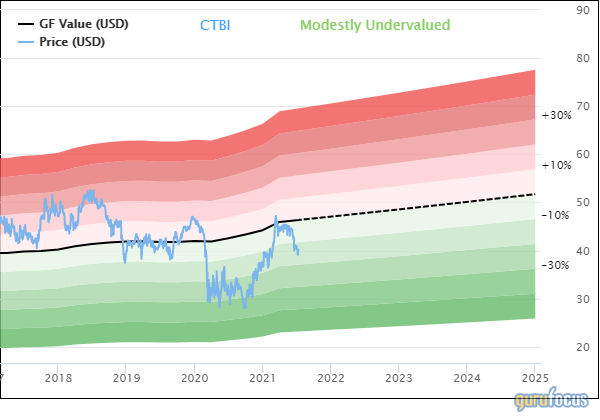 Community Trust Bancorp has a GF Value of $46.35, which gives the stock a price-to-GF-Value ratio of 0.87. Shares could return more than 15% from current levels if they were to reach the GF Value. Factoring in the dividend yield, the total returns could amount to nearly 19%. Shares are rated as modestly undervalued by GuruFocus.

Community Trust Bancorp proves that size doesn’t matter when it comes to dividend growth as the company has raised its dividend for four decades. Dividend growth may not be the highest, but the company offers a very high yield and a very healthy payout ratio. For investors looking for regional bank exposure, Community Trust Bancorp could provide strong total returns.

I am/ we are currently short the stocks mentioned. Click for the complete disclosure
Rating: 4 / 5 (1 votes)
Bookmark