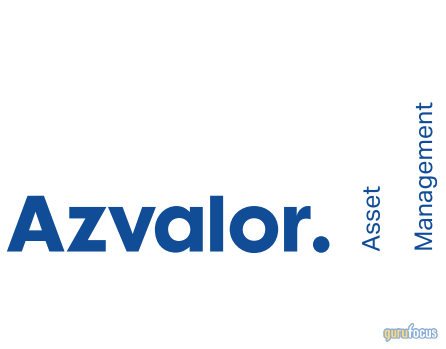 AzValor Internacional FI (Trades, Portfolio) has revealed its portfolio for the second quarter of this year. Major trades include new buys into Bonanza Creek Energy Inc. (BCEI, Financial) and Public Power Corp. SA (ATH:PPC, Financial), additions to the firm’s Endeavor Mining PLC (TSX:EDV, Financial) and Whitehaven Coal Ltd. (ASX:WHC, Financial) positions and a reduction in its Cameco Corp. (CCJ, Financial) holding. AzValor Internacional FI (Trades, Portfolio) is a fund designed to be invested entirely in undervalued equity assets listed on the global markets for investors with a long-term investment horizon. The fund targets companies at a price below their intrinsic value. Its portfolio mainly comprises European companies listed on secondary markets that are individually selected, without preference towards company size, sector or country.

At the end of the quarter, the fund’s portfolio contained 69 stocks, with five new holdings. It was valued at $897 million and has seen a turnover rate of 13%. Top holdings include Tullow Oil PLC (

BCEI, Financial). Managers of the fund purchased 435,500 shares that traded at an average price of $40.50 throughout the quarter. Overall, the purchase had a 1.93% impact on the portfolio and GuruFocus estimates the holding has lost 7.58% since it was established.

Denver-based Bonanza Creek Energy is an exploration and production company focused on the extraction of oil and associated liquids-rich natural gas in the United States. Its operations are focused in the DJ Basin of Colorado. The low risk and stable production profile of these assets provides a strong cash flow base from which to develop the Niobrara and Codell formations in Colorado, the growth engine of the company.

On Aug. 6, the stock was trading at $37.43 per share with a market cap of $1.15 billion. According to the GF Value Line, the shares are trading at a modestly undervalued rating. 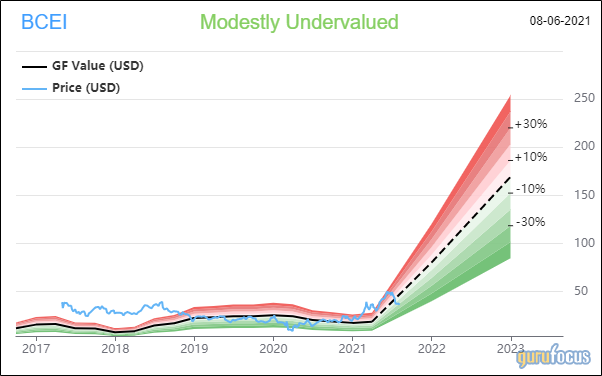 GuruFocus gives the company a financial strength rating of 8 out of 10 and a profitability rank of 4 out of 10. There is currently one severe warning sign issued for a Beneish M-Score indicating the company may have manipulated its financial results. Despite the low profitability rank, the company’s operating and net margins rank well compared to competitors in the oil and gas industry. 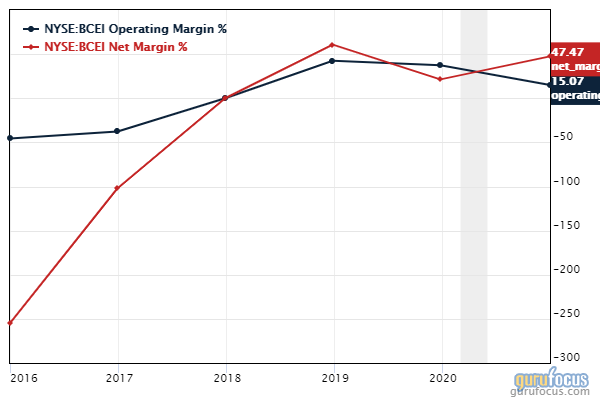 Endeavour Mining is a gold mining company. The company is operating four mines in West Africa in addition to having project development and exploration assets. It focuses on effectively managing its existing assets to maximize cash flows as well as pursuing organic and strategic growth opportunities that benefit from its management and operational expertise. Its operations are held in Burkina Faso (Karma, Hounde, Mana and Boungou mines), Cote d'Ivoire (Ity mines) and Mali (Kalana Project). The company generates maximum revenue from Burkina Faso.

As of Aug. 6, the stock was trading at C$30.96 with a market cap of C$7.78 billion. The stock is modestly undervalued according to the GF Value Line. 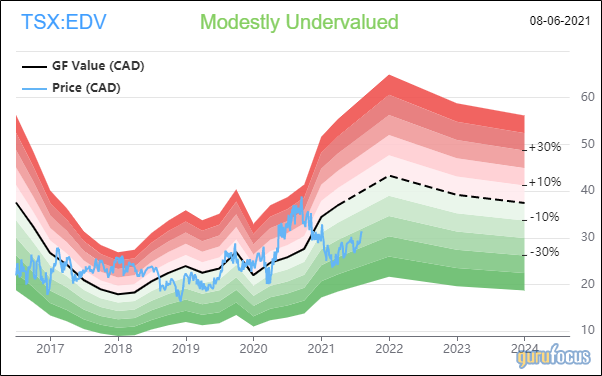 GuruFocus gives the company a financial strength rating of 5 out of 10 and a profitability rank of 5 out of 10. There are currently two severe warning signs issued for declining revenue per share and a Beneish M-Score that indicates the company may manipulate its financials. The company’s cash-to-debt ratio of 0.8 ranks worse than 75% of competitors as debt levels have remained at elevated levels over the last three years.

Another new holding was established during the quarter in Public Power (

ATH:PPC, Financial). The holding was established with the purchase of 1.76 million shares that traded at an average price of 9.18 euros ($10.79). Overall, the new buy had a 1.77% impact on the portfolio and GuruFocus estimates the total gain of the holding at 0.22% since it was purchased.

Public Power, or PPC, is a public electric utility company of which the Hellenic Republic is the majority shareholder. PPC is primarily engaged in the generation, transmission, and distribution of electric energy. With its subsidiaries, the company operates a portfolio of natural gas, coal, hydroelectric, wind and solar power plants. PPC's thermal energy generating facilities are responsible for most of the company's electricity production. The company generates the vast majority of its revenue from energy sales. These mostly take the form of sales of low voltage electricity to residential and small commercial consumers. PPC retains a considerable market share in Europe's Interconnected System electric grid.

The stock was trading at €9.20 per share with a market cap of €2.13 billion on Aug. 6. The GF Value Line gives the stock a significantly overvalued rating. 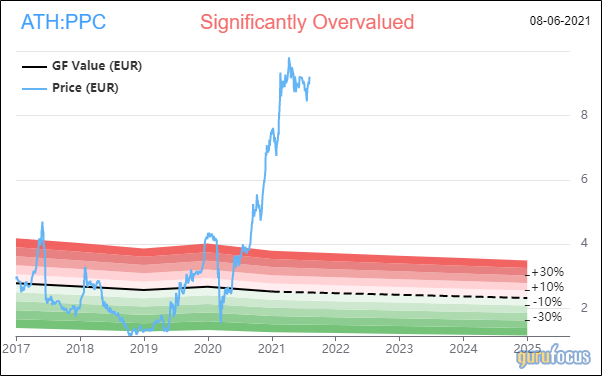 GuruFocus gives the company a financial strength rating of 3 out of 10, a profitability rank of 4 out of 10 and a valuation rank of 3 out of 10. There are currently four severe warning signs issued including declining revenue per share and poor financial strength. The company’s revenue has been in a slow decline since 2015, but net income started to make a recovery by the end of 2020.

CCJ, Financial) holding with another 60.78% reduction. Fund managers sold 976,490 shares that traded at an average price of $18.83 during the quarter. The fund has gained an estimated total of 63.32% on the holding and the reduction had a -1.68% impact on the portfolio overall.

Cameco is one of the world's largest uranium producers. When operating at normal production, the flagship McArthur River mine in Saskatchewan accounts for roughly 50% of output in normal market conditions. Amid years of uranium price weakness, the company has reduced production, instead purchasing from the spot market to meet contracted deliveries. In the long term, Cameco has the ability to increase annual uranium production by restarting shut mines and investing in new ones. In addition to its large uranium mining business, Cameco operates uranium conversion and fabrication facilities.

On Aug. 6, the stock was trading at $17.19 per share with a market cap of $6.82 billion. According to the GF Value Line, the shares are trading at a significantly overvalued rating. 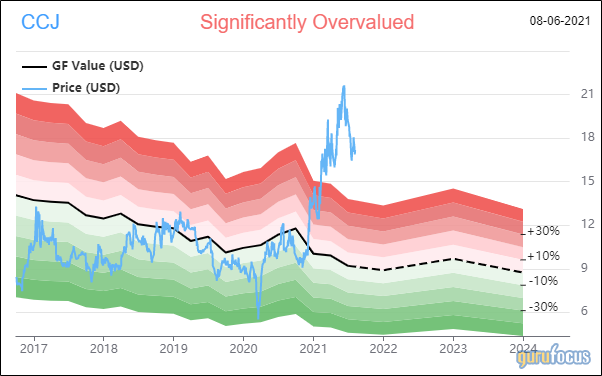 GuruFocus gives the company a financial strength rating of 5 out of 10, a profitability rank of 5 out of 10 and a valuation rank of 2 out of 10. There are currently three severe warning signs issued for a low Piotroski F-Score, declining revenue per share and a declining gross margin percentage. The company’s profitability rank has remained low with negative returns on invested capital and an increasing weighted average cost of capital.

Other top guru shareholders of Cameco (

ASX:WHC, Financial) holding that was purchased in the first quarter. The position was boosted by 53.85% with the purchase of 9.7 million shares that traded at an average price of $1.61 during the quarter. Overall, the addition had a 1.31% impact on the portfolio and GuruFocus estimates the total gain of the holding at 33.70%.

Whitehaven Coal is a large Australian independent thermal and semisoft metallurgical coal miner with several mines in the Gunnedah Basin, New South Wales. It also owns the large undeveloped Vickery and Winchester South deposits in New South Wales and Queensland respectively. Coal is railed to the port of Newcastle for export to Asian customers. Equity salable coal production expanded from 10 million tonnes in fiscal 2014 to about 15 million tonnes in fiscal 2021, largely due to Maules Creek. The Maules Creek and Narrabri mines should be the key driver of an expansion in equity coal production to approach 19 million tons from fiscal 2023. Development of the Vickery deposit could see approximately 8 million tons of additional equity production from around 2025.

As of Aug. 6, the stock was trading at $2.17 per share with a market cap of $2.20 billion. The GF Value Line notes that the stock is a possible value trap and investors should think twice before purchasing shares. 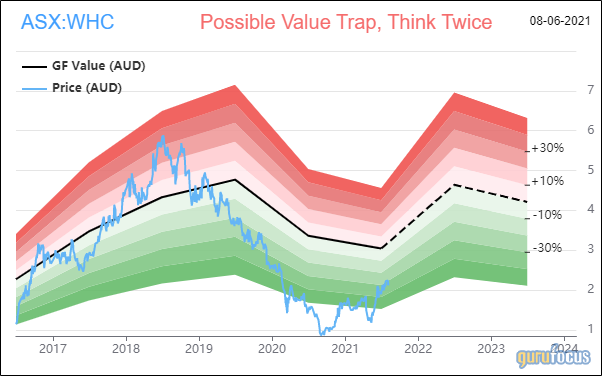