The restaurant industry is well on its path to recovery after the adverse impact of the initial onset of the Covid-19 pandemic. While there might be a certain level of consumer reluctance with respect to frequently venturing out, restaurant players have seen a huge recovery in revenues driven by a combination of dine-in revenues as well as digital orders.

CMG, Financial), a player that made the most out of the pandemic by focusing on bolstering its technological infrastructure, introducing more drive-through "Chipotlanes" and improving its rewards program, of which the company counted an impressive 23 million loyalty members as of the most recent quarter. Let us analyze this company's business strategy and valuation to see if it could offer a compelling long-term investment opportunity.

Chipotle Mexican Grill's robust digital infrastructure helps it stand out amongst its competitors and also benefits the business. The largest chunk of the company's revenue is derived from digital sales. During the pandemic, customers used Chipotle's website, mobile app and third-party delivery services more often, and that change has stuck even to this day. This is what resulted in the company delivering a $1.89 billion billion top-line for the most recent quarter, which ended June 30. This represented a staggering 38.67% revenue growth as compared to the $1.36 billion in revenue reported in the corresponding quarter of 2020. The company beat the analyst consensus estimate of $1.88 billion. Its sales through the digital channel more than tripled in the previous year.

Chipotle generated a gross margin of 39.64% and an operating margin of 13.20%, which were higher than in the same quarter of last year.

Its adjusted earnings per share (EPS) were $7.46, and it easily outperformed the analyst consensus estimate of $6.53.

Moreover, in the last quarter, the company opened 56 new restaurants, of which 45 were built with a Chipotlane. The company looks to double its North American business and its current store footprint of 2,853 to 6,000 in the coming years. Whether pandemic-related behavioral changes by customers are short-lived or permanent, Chipotle appears to have strengthened its competitive positioning in an industry that was devastated.

Plant-based food consumption is a rapidly accelerating lifestyle trend in the U.S. and many other parts of the globe. Chipotle Mexican Grill is exploring ways to give more variety to its consumers in this category through various forms of new introductions. The company announced its latest menu innovation, a plant-based chorizo, is "a flavourful chorizo made with ingredients grown on a farm, and not in a lab." Chipotle's culinary team has worked relentlessly over the years to develop the plant-based chorizo recipe to provide plant-based proteins using authentic ingredients. It is free of artificial preservatives, flavors and colors and is made without gluten, grains, or soy.

The management revealed that the ongoing menu innovation would continue to be the company's top priority. The response to this plant-based product is still being tested in Indianapolis and Denver. It is worth noting that in the past, Chipotle has capitalized on offerings such as lifestyle bowls, cauliflower rice and quesadillas with the cauliflower dish being a big success among health-conscious consumers. The company’s focus on anti-oxidant rich fast food options are bound to attract more and more consumers as well.

Like most quick-service restaurant players, Chipotle Mexican Grill has also worked hard towards developing its digital experience to boost revenues during the pandemic. The company has brought about various improvements to the Chipotle Rewards program, which has already helped the business to increase its digital sales by over $2 billion this year. The Chipotle Rewards program is one of the fastest-growing loyalty program in the restaurant industry that boasts 24 million members as of the most recent quarter.

To boost the Chipotle Rewards program, the company launched Extras, an exclusive feature for members that unlocks access to extra points, helping members get free Chipotle even faster. It enhances the program with custom-made challenges to earn additional points and gather achievement badges. It is worth highlighting that Chipotle is the first national restaurant to launch badges as part of its loyalty program. Members can participate in Extras to earn additional points towards rewards and also collect achievements badges. Its points can be redeemed for various rewards in the Rewards Exchange by choosing from over fifteen different reward options, including menu items, apparel from Chipotle Goods and more. 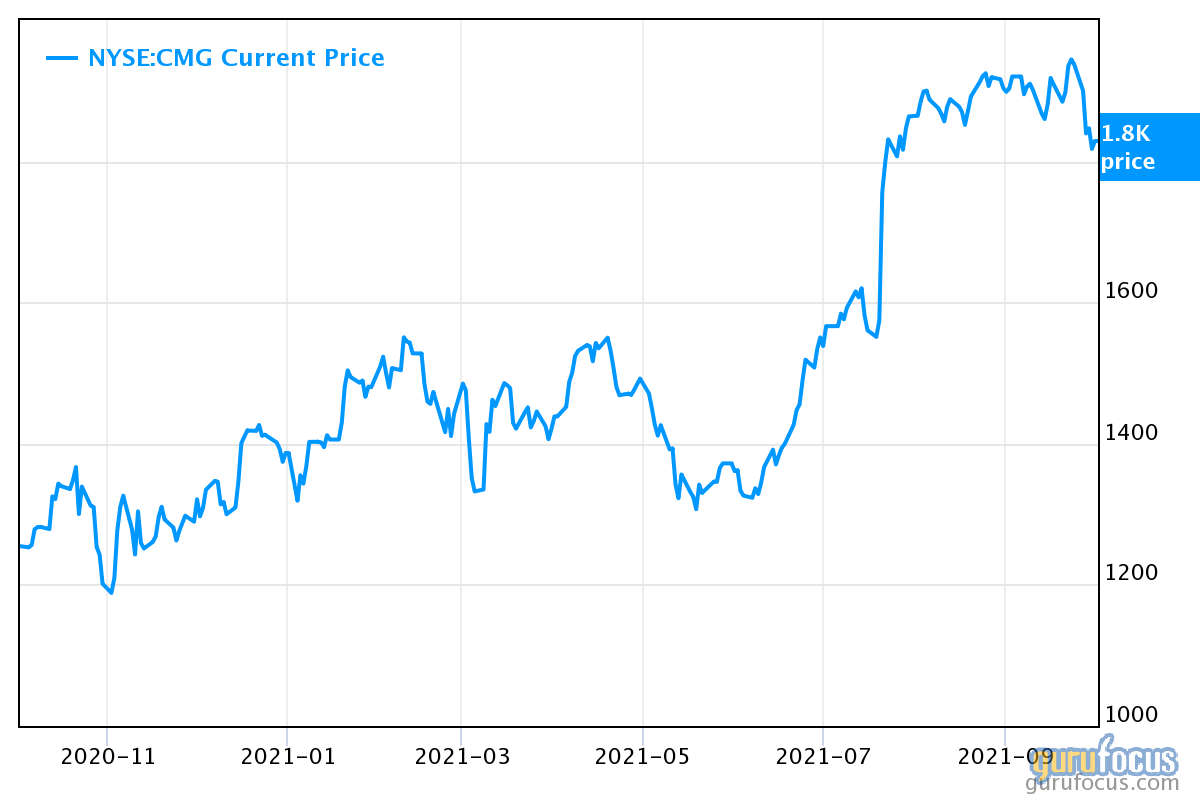 There is little doubt over the fact that Chipotle's stock is expensive. Investors are usually unsure of buying a share whose absolute price is over $1,800 and even from a valuation standpoint, the company’s price-sales ratio of 7.62 and its enterprise-value-to-Ebitda multiple of 49.28 are well above the industry averages.

However, I think it is unfair to rule out the company just because of these metrics. Chipotle has recovered around 70% of in-restaurant sales thus far while retaining approximately 80% of digital sales with only 15% of people using both channels. The minimal level of sales cannibalization between channels indicates real growth and a definite positive impact of the sales initiatives. I see high potential for growth with this company, particularly of the dine-in business, and I believe that Chipotle could be an excellent buy-on-dips stock for investors.