UFP Industries: A Strong Performer, but Wait for a Dip

Using its healthy cash flow, the company is growing its asset base to generate even higher revenue and earnings

Occasionally, I run a simple screener that I call “Quality + Low PEG.” It identifies stocks with the following criteria:

UFPI, Financial) is one of the 10 stocks that makes it through the screener.

The Grand Rapids, Michigan-based company, formerly known as Universal Forest Products, describes itself this way on its website: “a multibillion-dollar holding company with subsidiaries around the globe that serve three markets: retail, industrial and construction.”

This image, also from the website, shows those three segments:

Put another way, UFP is no longer just a 2x4s company; it is diversifying its base. And it’s mainly doing that through acquisitions.

In its 10-Q for the period that ended Sept. 25, the company reported nine acquisitions over the previous year and noted, “In aggregate, acquisitions completed since the end of September 2020 and not consolidated with other operations contributed approximately $903.0 million in net sales and $26.0 million in operating profits during the first nine months of 2021.”

The biggest of those deals were for:

Despite the buying spree, UFP Industries continues to enjoy a solid financial position: 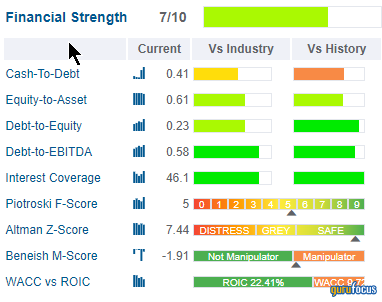 Note that the Altman Z-Score is near the top of the safe range and that the Piotroski F-Score is respectable.

Most important on this table is the spread between the weighted average cost of capital and the return on invested capital. ROIC is more than twice as much as WACC, 22.41% compared to 9.73%. A company that generates returns that are significantly higher than its cost of capital should produce ample cash flow (which UFP has): 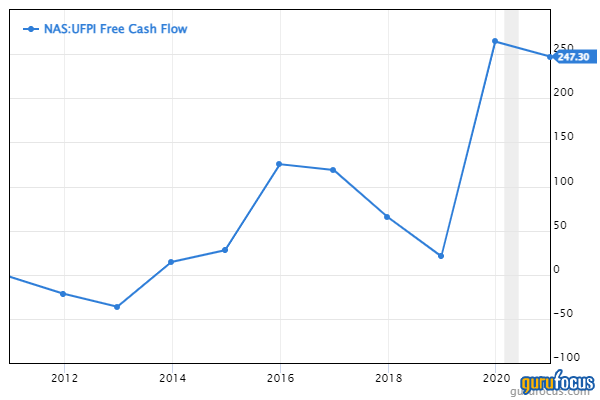 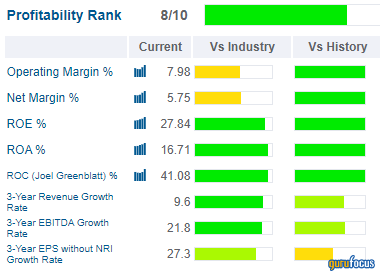 As the table indicates, UFP Industries enjoys a strong 8 out of 10 score for profitability. Looking at the two lines for margins, we see its current gross margin and net margin are near the industry average and better than its previous performance on those metrics.

In its 10-Q for the third quarter, the company noted that net sales had risen 41% compared to the same quarter of 2020 because selling prices were up 28% and acquisitions led to a 16% increase in unit sales. Organic unit sales were down 3% in the quarter.

All of that helped it beat the industry averages for return on equity and return on assets, as well as its previous returns.

Since 2014, the company has consistently grown its dividend: 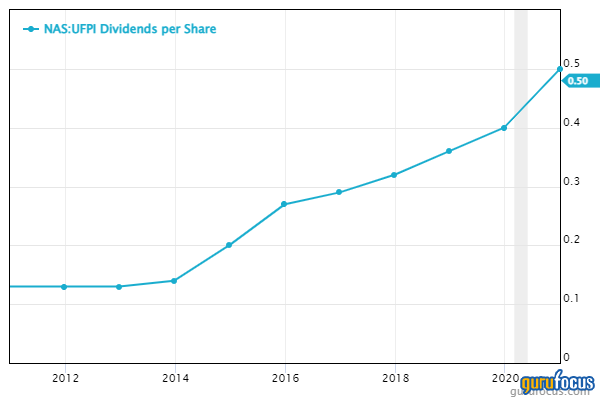 But because the share price has grown even more quickly, the dividend yield looks anemic: 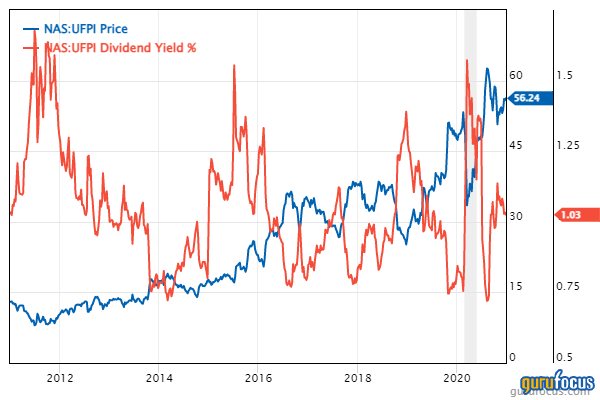 Patient investors, those willing to wait for a significant dip in the stock price, could enjoy a higher dividend.

Booming commodity prices and higher free cash flows had given the company room to buy back shares over the past couple of years (note that this 10-year chart ends in December 2020). 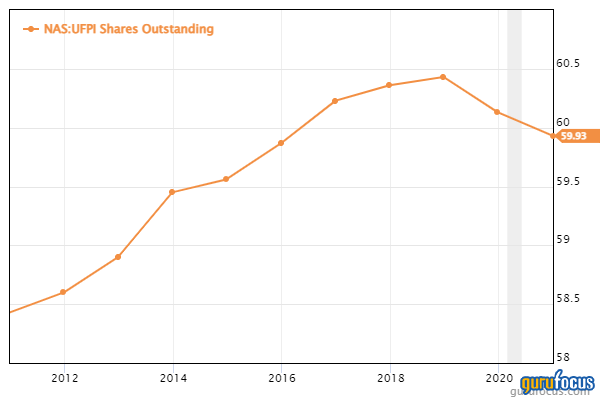 All the above contributed to its above-average performance in recent years; Louisiana-Pacific Corp. ( 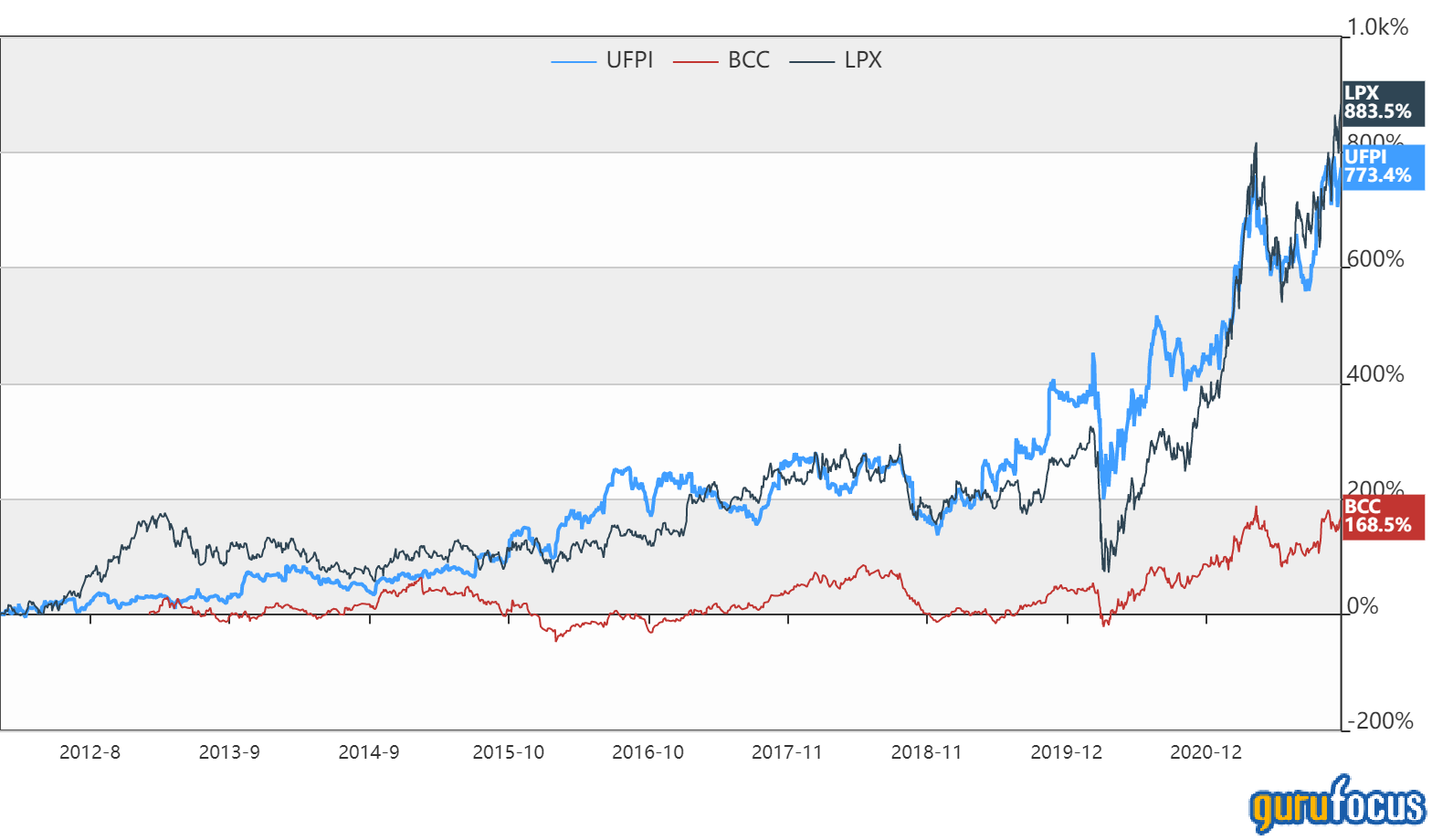 Although UFP Industries’ performance has enjoyed a boost from recent commodity prices, it has a solid record for mid- and longer-term results as well:

If its acquisitions deliver returns as management expects, there is a high probability the company will continue to produce returns that beat the S&P 500: 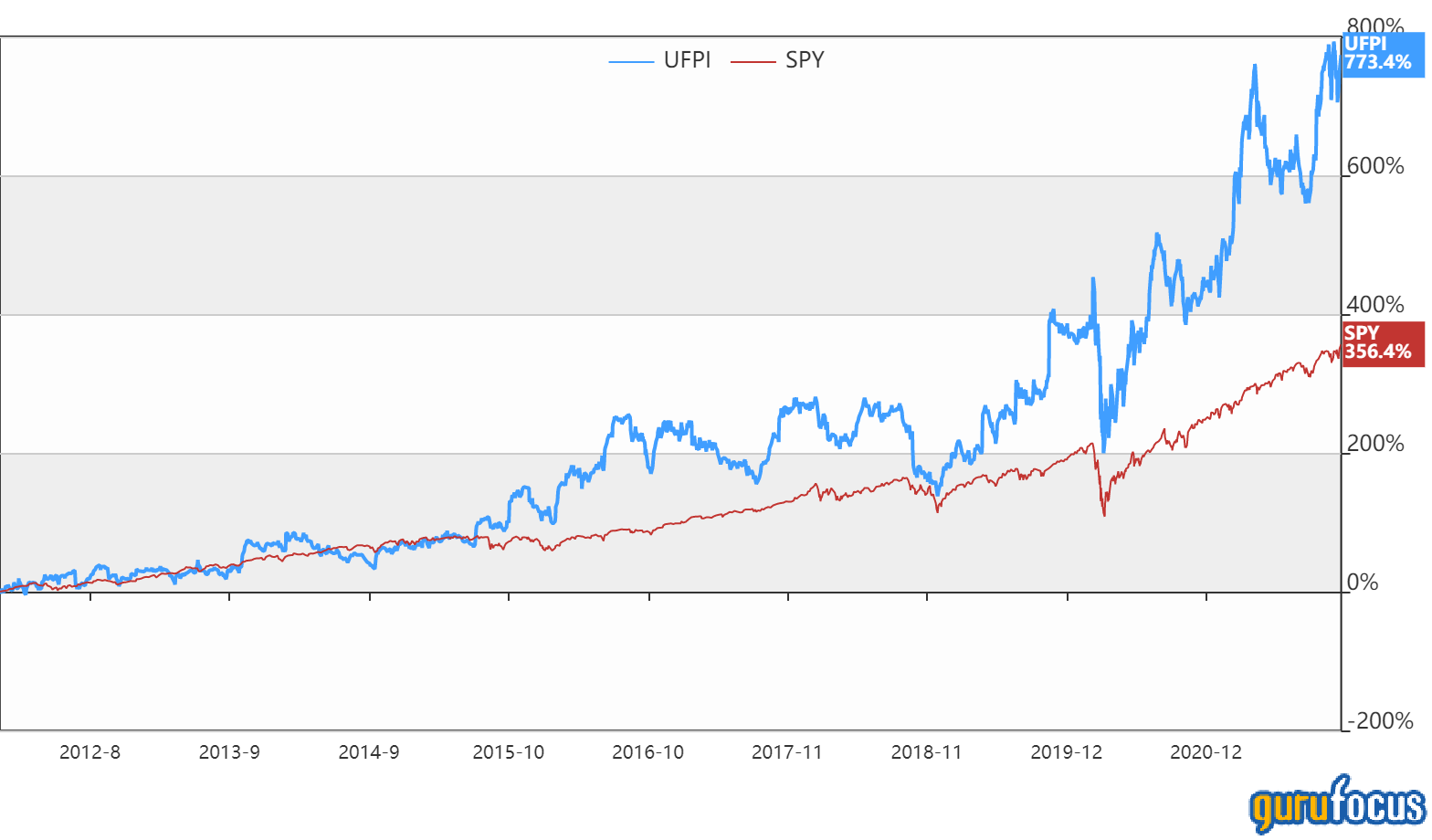 This is a 10-year price chart for UFP Industries: 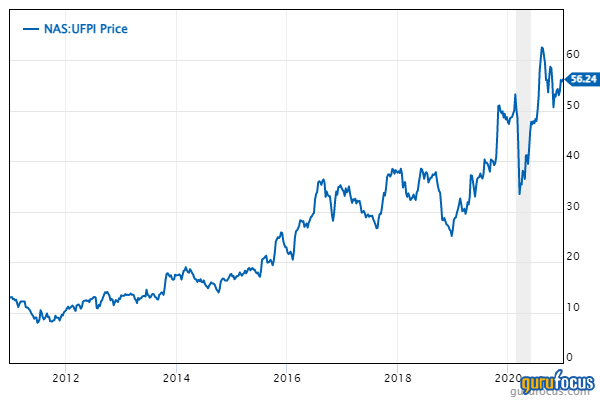 The GF Value Chart concludes the stock is fairly valued: 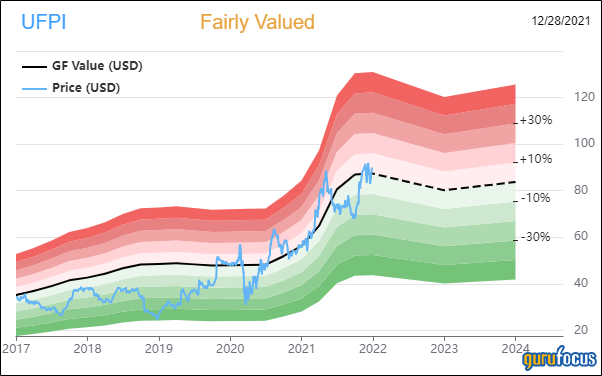 It has a price-earnings ratio of 12.13, which is slightly above the forest products industry median of 11.92.

The PEG ratio comes in at 0.69, compared with a median of 1.24 for the industry, on a scale in which 1.00 is considered fairly valued. UFP Industries’ ratio shows undervaluation because of the robust average Ebitda growth of 17.70% over the past five years. 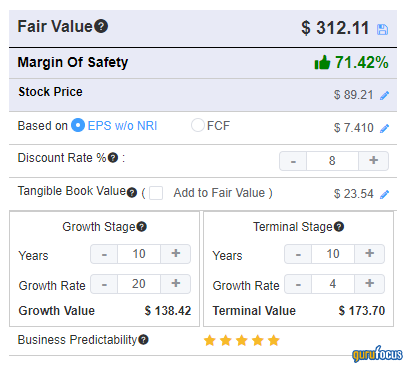 Overall, I believe we can safely say UFP Industries is somewhat undervalued.

Generally, the gurus followed by GuruFocus are slightly more bearish than bullish:

Six of them have positions in the stock. The three with the largest stakes are:

UFP Industries appears to have made the most of the lumber price boom, but there’s much more going on. It is expanding and diversifying, growing the base from which it will generate future revenue and earnings per share. So as the fourth quarter of 2021 comes to an end, the company is well positioned to continue its growth and profitability.

The indicators suggest the company is undervalued, although we might argue by how much. The price chart shows the stock is volatile, meaning the share price goes up and down rapidly. Investors who wait for a deeper dip might be rewarded with bigger capital gains and a more generous dividend.

The stock would be most suitable for growth-oriented investors because of the potential for increases in the share price. Value investors may take an interest because of the PEG ratio and strong financial situation. Income investors should look elsewhere.