Lots of attention is paid to companies in the U.S. with a long track record of dividend growth, but there are many companies that are headquartered in Canada with impressive growth streaks of their own.

We will look at two Canadian utility companies offering high and reliable yields. All figures are in U.S. dollars unless otherwise noted.

Canadian Utilities has raised its dividend for 50 consecutive years in Canadian dollars. This is the longest dividend growth streak among all Canadian companies. U.S. investors have seen dividends grow with a compound annual growth rate of 6.4% over the last decade.

U.S. investors received $1.41 of dividends per share in 2021. According to Yahoo Finance, Wall Street analysts expect the company will earn $1.67 for the year, equating to a projected payout ratio of 84%. Fluctuations due to currency exchange are always to be expected with foreign companies, but Canadian Utilities’ five-year average payout ratio is 81%, so the expected payout ratio for 2021 isn’t too far off the medium-term average.

With Canadian Utilities trading at $29.50, the stock has an implied forward price-earnings ratio of 17.7 using estimates for 2021. This is close to in line with the 10-year average multiple of 17.9 times earnings.

The GF Value chart shows that the stock is mildly ahead of its intrinsic value. 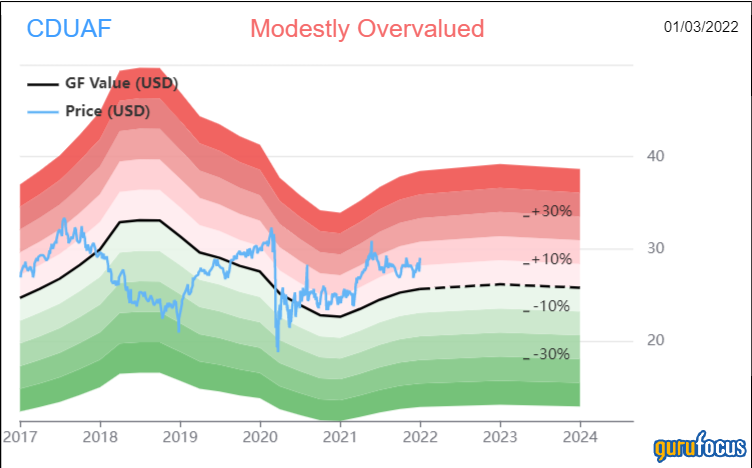 Canadian Utilities has a GF Value of $25.64, leading to a price-to-GF Value of 1.15. Shares would need to fall 13% to reach the GF Value. The stock is rated as modestly overvalued by GuruFocus.

Next up is Fortis Inc. (

FTS, Financial), which is the largest publicly traded utility company in Canada. The company has operations in Canada, the U.S. and the Caribbean. Fortis’ business included electricity, hydroelectricity and natural gas. The company is valued at $22.8 billion and produces annual revenue of nearly $7 billion in annual revenue.

Fortis has an impressive growth streak of its own, having raised its dividend for 48 consecutive years. The growth streak trails just that of Canadian Utilities for longest among Canada-based companies. Like many utility companies, growth has been slow over the years as the dividend for U.S. investors has a CAGR of just 2.3% since 2011.

Based on the most recent announced dividend payment, Fortis has a forward yield of 3.5%. This is lower than the 10-year average yield of 3.8%, but still almost three times what the market index offers.

Shares of Fortis are trading at $47.59 at the moment, giving the stock a forward multiple of 22.7. This is close to the average price-earnings ratio of almost 21 since 2011.

The GF Value chart also shows that Fortis is trading at a premium to its GF Value. 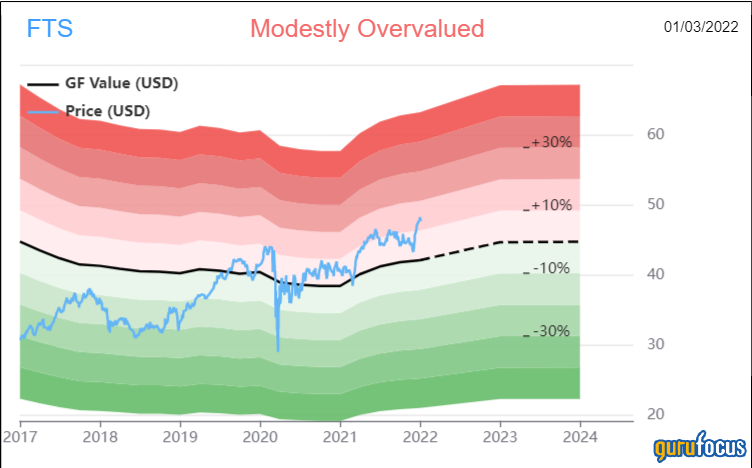 Fortis has a GF Value of $42.18, resulting in a price-to-GF Value of 1.13. Shareholders would see an 11% decline if the stock were to trade with its GF Value. Fortis is also rated as modestly overvalued by GuruFocus.

Income seeking investors often favor utility stocks because of both their dividend yield and annual raises. Canadian Utilities and Fortis are two of Canada’s largest utility companies. They also happen to own the two longest dividend growth of all the Canadian companies.

Canadian Utilities and Fortis are trading higher than their GF Values, but not outrageously so. They are both also trading close to their long-term average valuation.

Each name is offering a significantly higher yield than what the market index can provide, with their respective expected payout ratios in the same ballpark as the long-term averages. For investors looking for income from Canada, either name could be an enticing option due to the high yields.