Gaining a foothold in this sector is tough, yet these companies are posting double-digit growth 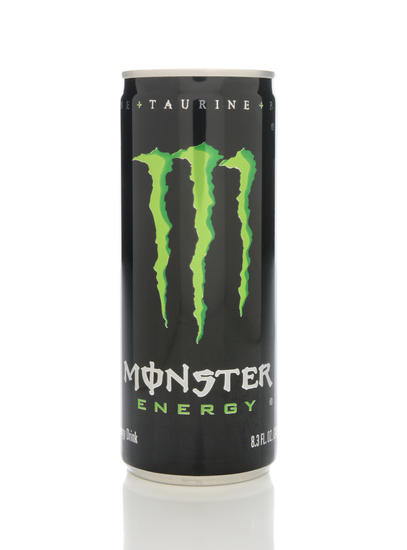 Companies in the consumer defensive sector often find it difficult to establish competitive moats and brand advantages. These types of businesses, which include beverage makers, packaged food producers and grocery stores, do not typically have products that you can’t get anywhere else.

Instead, their brand value must come from a combination of good management, accurately determining which products consumers want and catering to customer demand in a way that earns their regular business. The barriers to entry in these kinds of businesses are low, though tough competition and the difficulty of accurately analyzing market demand make it difficult to achieve high growth rates.

DG, Financial), Boston Beer Co. Inc. (SAM, Financial) and Monster Beverage Corp. (MNST, Financial) are three companies operating in the consumer defensive sector that have managed to outperform most of their peers, growing their top and bottom lines by at least 10% per year over the past five years. These aren’t your traditional consumer defensive companies, though. Not only are they growing fast, they also don’t pay much (or anything) in the way of dividends, so those looking for income will want to search elsewhere.

Let’s take a look at the growth and competitive advantages of these companies to determine how likely they are to continue generating such positive results in the future.

DG, Financial), a Tennessee-based discount general store with more than 16,000 locations in 46 U.S. states, was trading around $204.71 on Wednesday for a market cap of $47.47 billion. The stock is up 2.54% over the past year, and the GF Value Line rates shares as modestly undervalued. 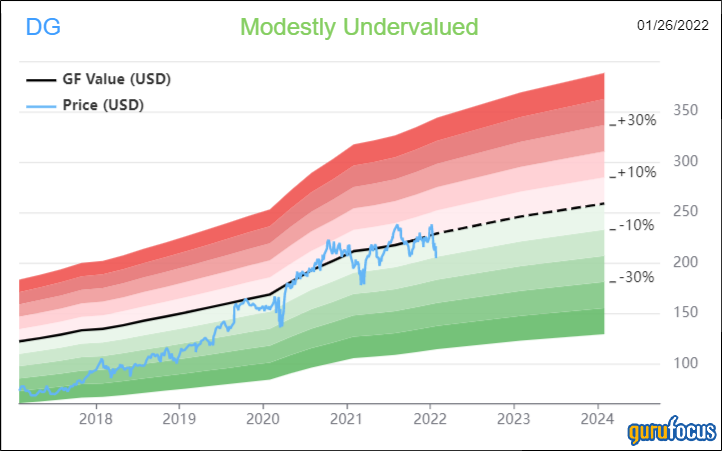 GuruFocus gives the company a financial strength rating of 4 out of 10 and a profitability rating of 9 out of 10. With a price-earnings ratio of 20.06, the stock is trading slightly above its median historical valuation. However, the company has reported strong growth numbers in recent years. The five-year revenue per share growth rate is 13.50%, while the five-year earnings per share growth rate is 19.40%. 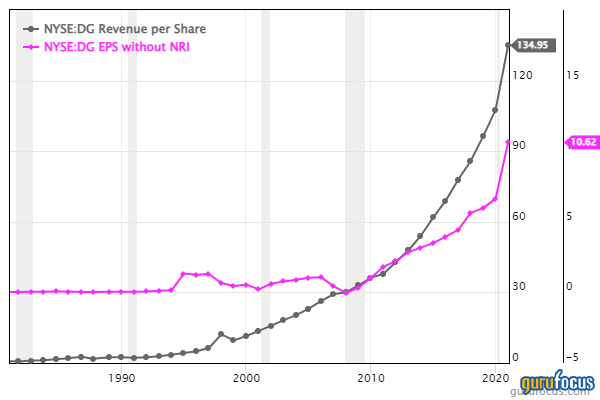 Before 2008, the company’s earnings were erratic, even though its revenue was growing steadily. As the financial crisis was unfolding, though, Dollar General kicked off what would become the first in a series of restructuring efforts over the years. These restructuring efforts shook up management, streamlined job functions, eliminated many unnecessary office jobs and took other cost-cutting measures to focus on growth and value creation for shareholders.

The result was a more lightweight and efficient business model that meshed well with what the discount store chain offers its customers, namely low prices. This is the main source of Dollar General’s competitive advantages. Its single-minded focus on offering the lowest prices is reflected not just at the store level, but at the corporate level as well.

In order to continue its current growth trajectory, Dollar General may need to undergo further restructuring efforts, though. Cost-cutting measures can only provide a boost to profitability for so long before they become the new normal, and if the company wants another leg up, it will have to cut even more costs. Whether it can do this remains to be seen, but Dollar General should also get a boost from higher inflation. With the sticker shock of paying more for everyday necessities, more customers might turn to Dollar General rather than more expensive stores.

SAM, Financial), the owner of several famous American alcohol brands such as Samuel Adams and Angry Orchard, was trading around $421.26 on Wednesday for a market cap of $5.17 billion. The stock has lost 53.85% over the past year, and the GF Value chart rates shares as significantly undervalued. 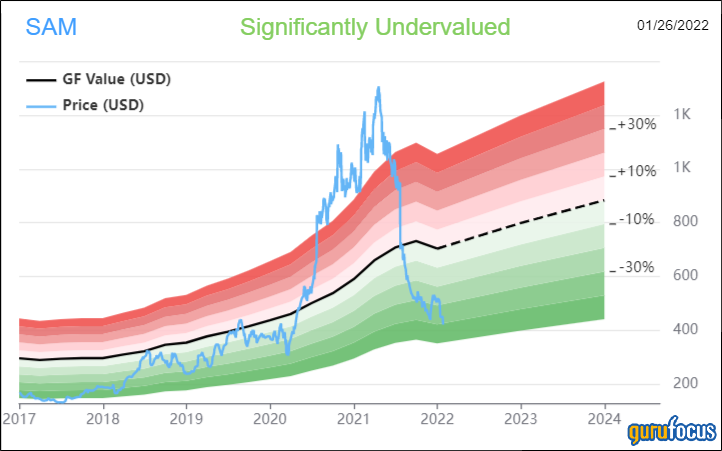 GuruFocus gives the company a financial strength rating of 8 out of 10 and a profitability rating of 9 out of 10. With a price-earnings ratio of 53.40, the stock is trading above its median historical valuation. However, the company has a five-year revenue per share growth rate of 14.70% and a five-year earnings per share growth rate of 14.30%, beating 86% of industry peers. 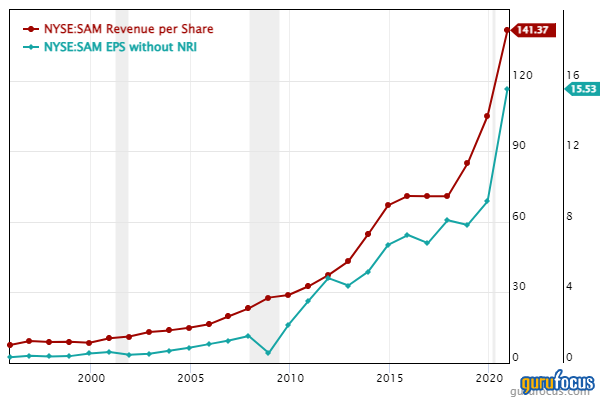 Founded in 1984, Boston Beer has gained its competitive edge the same way most brewing companies do: by brewing drinks that people love and creating brand value through effective marketing campaigns. Its flagship brand, Samuel Adams, is one of the best-selling beers in the U.S. and is widely considered one of the best-quality craft beers. Borrowing the name of one of America’s founding fathers has also proven to be an excellent marketing strategy.

The stock has come under pressure lately, losing more than half of its value over the past year, so some might be questioning if its competitive advantages are gone. However, the decline has more to do with previous overvaluation than anything else. Investors flocked to Boston Beer’s stock in droves during 2020 as they bet on higher alcohol consumption, driving the price-earnings ratio up above 100. Then, in the third quarter of 2021, the company reported $12.7 million in write-downs due to an unexpected slowdown in growth for its Truly hard seltzer brand, which effectively popped the price bubble. Despite stock market acrobatics, the strength of Boston Beer’s brands remains intact as they continue growing market share.

MNST, Financial), famous for its energy drinks, was trading around $84.59 per share on Wednesday for a market cap of $44.76 billion. The stock is down 1.56% over the past year, and the GF Value Line rates shares as fairly valued. 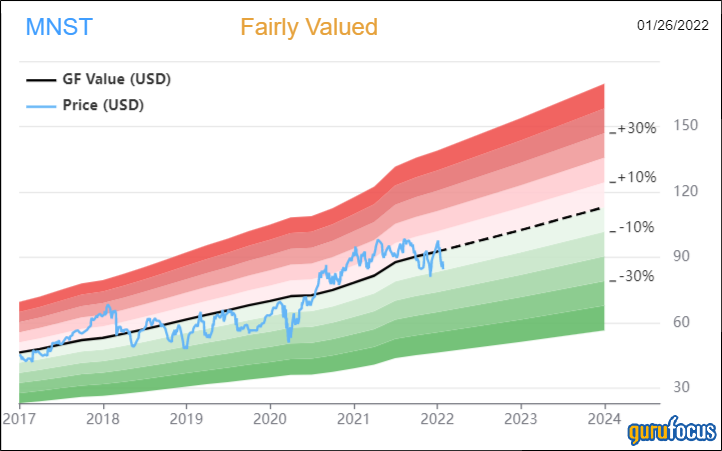 GuruFocus gives the company a financial strength rating of 9 out of 10 and a profitability rating of 9 out of 10. With a price-earnings ratio of 29.67, the stock is trading below its median historical valuation. The company’s five-year revenue per share growth rate is 13.40% and its five-year earnings per share growth rate is 21.90%. Monster Beverage also boasts an operating margin of 33.63%. 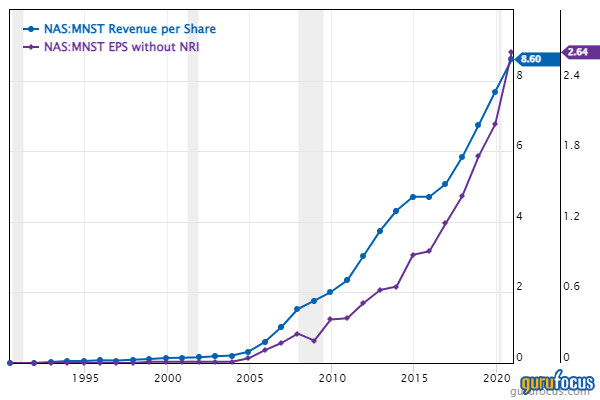 Monster Beverage got its start selling juice products under the Hansen’s name in 1935. Then, in 2002, it developed the Monster brand of energy drinks. By 2012, it saw the huge growth opportunity available in the energy drinks market and decided to focus its growth efforts there, so it rebranded as Monster Beverage, eventually selling off its Hansen’s and other non-energy drinks to Coca-Cola Co. (

It wasn’t long after the rebranding before Monster became the top-selling energy drink brand, available at nearly every convenience store. The name and edgy packaging hold huge appeal to the company’s target market, and the wide variety of flavors ensures that fewer customers are driven away by a lack of variety or aversion to certain tastes.

After a decade of rapid growth, the question that many investors now have is how long it will be before Monster’s growth slows down. It’s already made itself present in just about every major grocery store or convenience store, so the potential to acquire new customers just from passersby in the beverages aisle is lower. The company continues to see increasing sales, though, and it is also expanding into international markets. It is even planning to enter the alcoholic beverages industry through a $330 million all-cash deal for craft beer and hard seltzer producer CANarchy Craft Brewery Collective LLC.