Of the many factors that investors consider when looking into potential investment opportunities, one of the most common is, “Who has been buying and selling this stock?”

Whether we look at data from company insiders, investing gurus or the general market, it’s possible to unearth a variety of information on stocks based on who wants to buy them and who doesn’t.

Using the GuruFocus All-in-One Screener, a Premium feature, I screened the market for stocks trading below their GF Values that have been bought by insiders within the past month and gurus as of their most recent quarterly 13F reports. While not a sure-fire way to identify value opportunities, this strategy can be a great starting point for further research.

According to the screener results, three companies that are undervalued based on GF Value and have recent insider and guru buys are James River Group Holdings Ltd. (

JRVR, Financial), a Bermuda-based specialty insurance and reinsurance holding company mainly operating in the U.S., traded around $24.43 per share on April 8 for a market cap of $914.86 million. With a price-to-GF Value ratio of 0.71, the stock is modestly undervalued. 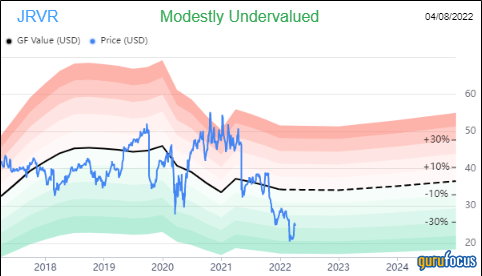 In March, there were 10 insider buys for James River, including a 50,000-share purchase from CEO Frank D’Orazio. In the below chart, we can clearly see the spike in insider buying:

In terms of guru trades, there were six gurus buying shares of James River in the fourth quarter of 2021, including

James River’s excess and surplus insurance business is its largest segment, and it has been booming in recent years. The company manages this segment well, limiting the risk of claims needing to be paid out by focusing on lower-risk artisan and trade contractors rather than large homebuilders or general contractors. Its second-largest segment, specialty admitted, focuses on insurance for businesses with unusual risks; like the excess and surplus segment, specialty admitted is profitable.

The company’s problems in recent years mainly stem from the smallest segment, casualty reinsurance, which insures other insurance companies on accident-related claims. This segment suffered unexpected losses near the end of 2020 and the beginning of 2021, devastating the bottom line. James River is taking strategic measures to address the risks caused by these losses, including a loss portfolio transfer retrocession agreement with Fortitude Reinsurance and a financing deal with Gallatin Point Capital for $150 million in exchange for convertible preferred stock.

ISTR, Financial) is a bank holding company that operates small- to medium-sized banks in its home state. The stock traded around $18.78 per share on April 8 for a market cap of $193.63 million. With a price-to-GF Value ratio of 0.76, the stock is modestly undervalued. 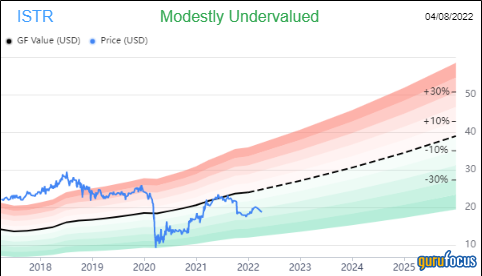 In March, there were four insider buys for Investar, two of which were made by CEO John J. D'Angelo for a combined 400 shares. The chart below shows insider buys outweigh insider sells over the past year.

Two gurus were buying shares of Investar in the fourth quarter of 2021, Royce and Hotchkis & Wiley, though Simons' firm did reduce its holding. By volume, gurus have mostly been bullish on this stock over the past year:

As a small-time bank, Investar is well-positioned to benefit from rising interest rates. Moreover, it has less exposure than many other banks to the highly indebted oil and gas sector, which represents only 2.2% of its loan portfolio. While the oil and gas sector is flush with profits at the moment thanks to the Russia-Ukraine conflict, the world will eventually need to wean its dependence on non-renewable fuels, spelling trouble for those banks that are left financing the industry once it begins its final decline.

Investar is also on a path of growth, acquiring smaller peers such as Cheha Financial Group in January 2021 and Bank of York in November 2019. Since nearly all of its revenue comes from net interest income, though, the bigger driver of growth will still be the interest rate environment.

ADC, Financial) is a Michigan-based real estate investment trust that primarily focuses on retail properties throughout the U.S. On April 8, shares traded around $68.25 apiece for a market cap of $4.87 billion. With a price-to-GF Value ratio of 0.90, the stock is fairly valued. 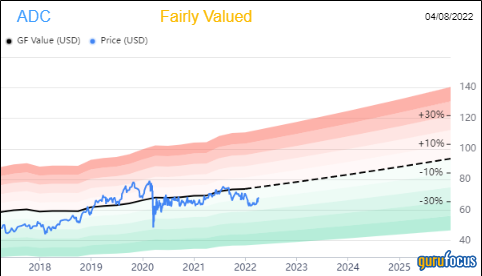 There were two insider buys for Agree Realty in March, both from President and CEO Joey Agree for a total consideration of 3,309 shares. Insiders have been buying a lot of this stock in recent years, with very few sells:

Paul Tudor Jones (Trades, Portfolio) and Cohen were both buying shares of Agree Realty in the fourth quarter of 2021, though Simons' firm was reducing its holding. The last two quarters have both seen a huge spike in guru buying volume:

O, Financial), as they are both monthly dividend payers that primarily own and lease retail properties in the U.S. Between the two, while Realty Income is more often in the limelight due to its market cap of $43.14 billion, Agree Realty has a stronger balance sheet as well as lower price-earnings and price-to-funds from operations ratios. Their dividend yields are also similar at around 3.9%.

REITs are a popular hedge against inflation, as the value of real estate tends to hold up well over time. Even if real estate prices decline in the near term due to higher interest rates reducing buyers’ purchasing power, this doesn’t have as much effect on REITs that can hold onto their properties for decades.