The share price has languished for the last 13 months, but the fundamentals and dividend are robust

Mr. Market has not been kind to Foot Locker Inc. (

But there is more to this story than just the stock price. It has a GF Score of 90 out of 100, it has a dividend of around 4% and it repurchased shares in the first quarter of this year.

On its website, the New York-based retailer reports it has some 2,800 retail stores in 28 countries, under the banners of Foot Locker, Kids Foot Locker, Champs Sports, Eastbay, atmos, WSS and Sidestep.

As part of its marketing and differentiation, it claims its corporate purpose is to inspire and empower youth culture.

The investors’ section of its website also makes clear its long-term objectives:

In its first-quarter 2022 investor presentation, the company argued its brand gives it a significant competitive advantage.

In its 10-K for 2021, Foot Locker said the athletic footwear and apparel industry is highly competitive. Competitors, in a generic sense, include “athletic footwear specialty stores, sporting goods stores, department stores, traditional shoe stores, mass merchandisers, and online retailers, some of which are our suppliers.” 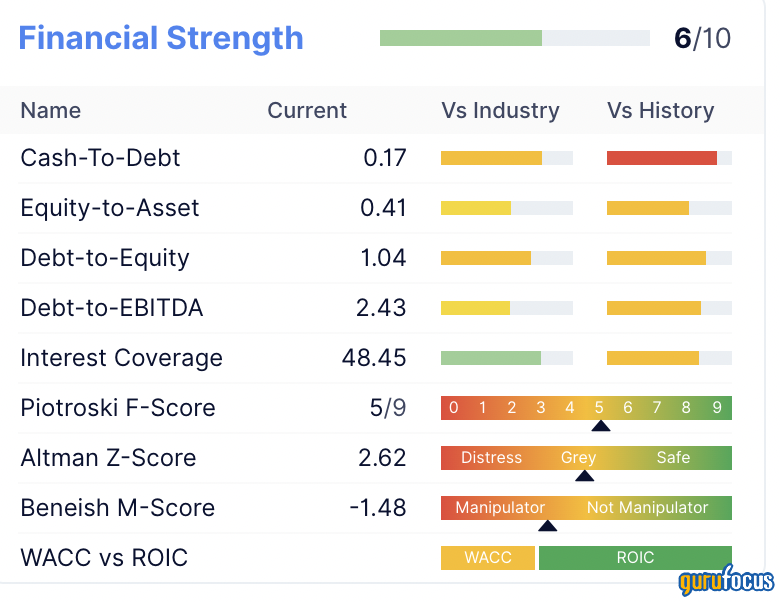 The end of the second quarter saw the company holding:

With that data, we can relax about the Altman Z-Score, which has dropped out of the Safe zone. 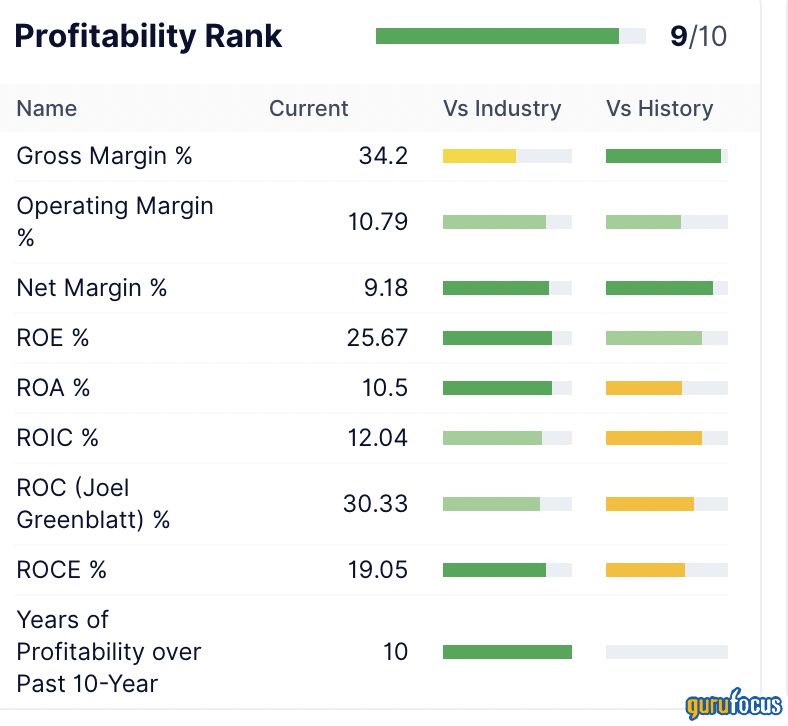 One reason for the high profitability score is its net margin. At 9.18%, it is well above the retail-cyclical industry median of 2.64%.

We see several other dark green bars, indicating industry outperformance, and especially for returns on equity, assets and invested capital. 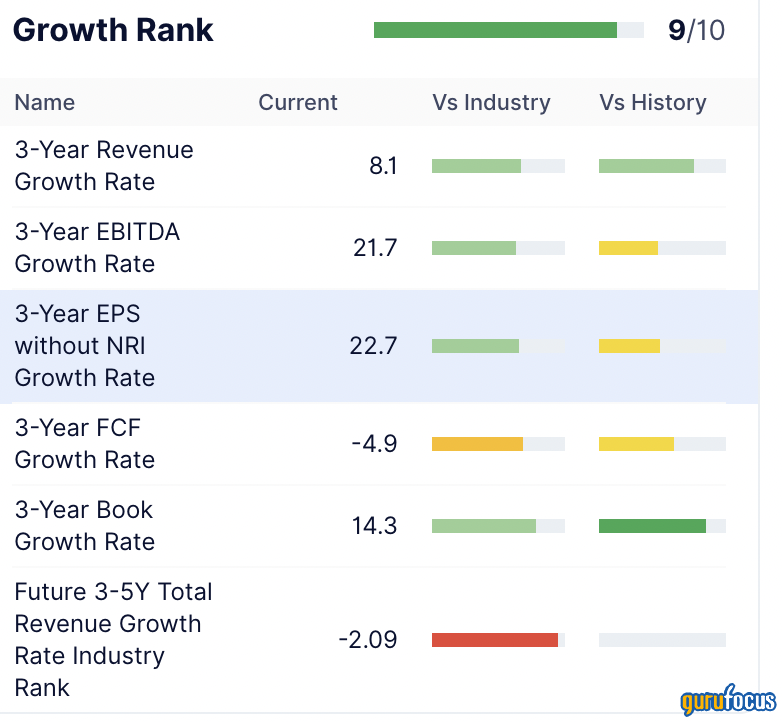 Good news in growth metrics, with three-year revenue, Ebitda and earnings running above the industry average.

The negative three-year free cash flow metric could be a cause for concern. But examination of the 10-year record shows that free cash flow is simply returning toward the mean after one exceptional period: 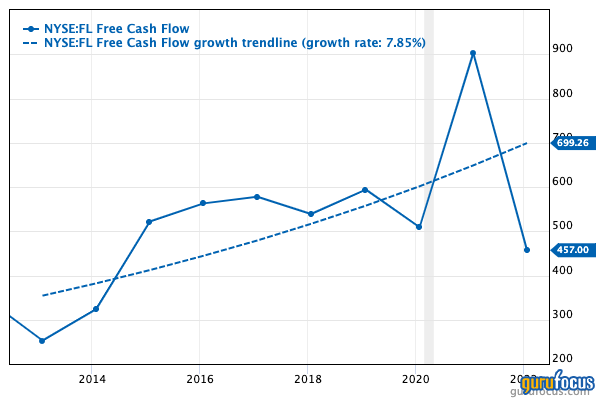 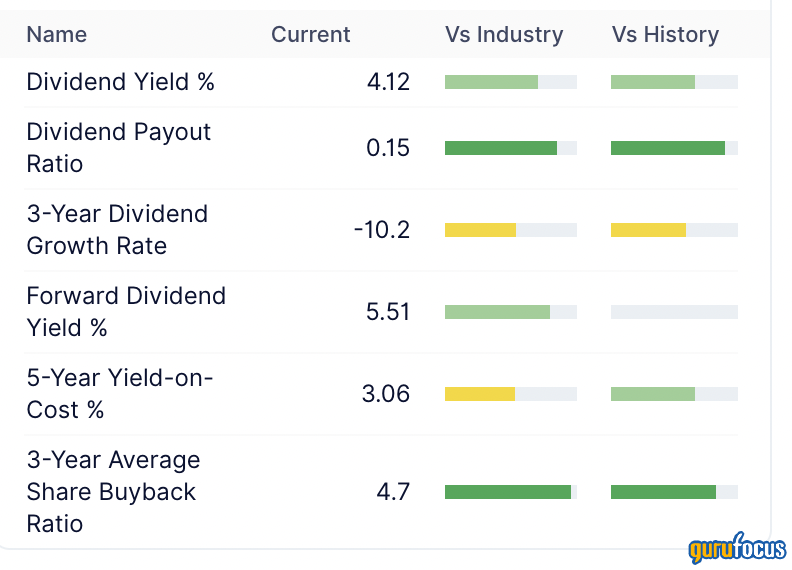 Foot Locker’s current dividend yield is well above the S&P 500 average. And, once again, a look at the last decade (up to the end of the fiscal year that ended Jan. 29) is revealing: 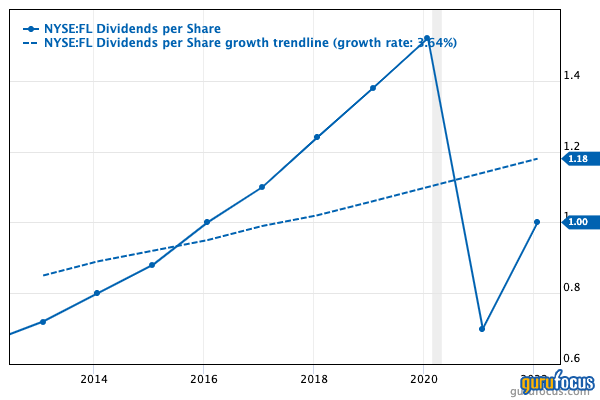 The big cut in 2020 also shows up in the three-year dividend growth rate. Specifically, it paid a quarterly dividend of 40 cents in the second quarter of 2020, but that dropped to 15 cents for the third and fourth quarters of the year. Over the course of 2021, the quarterly dividend increased to 20 cents and then 30 cents before returning to 40 cents in the first quarter of 2022.

Shareholders have also gained from share repurchases averaging 4.83% per year over the past decade: 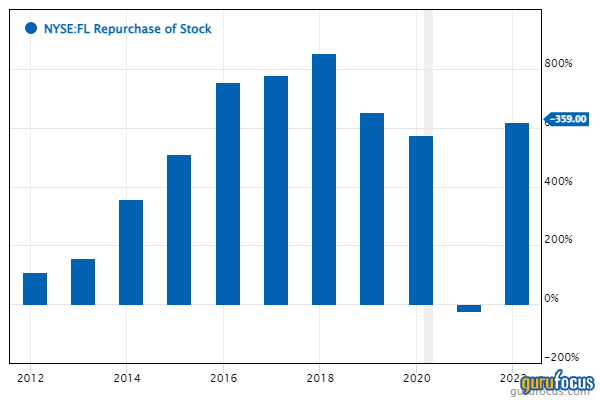 Comparing Foot Locker’s performance with Dick’s and Hibbett indicates the company dominated the first eight years of the past decade, but then tumbled along with the two competitors when the pandemic hit. And since then, Dick’s has been the best performer: 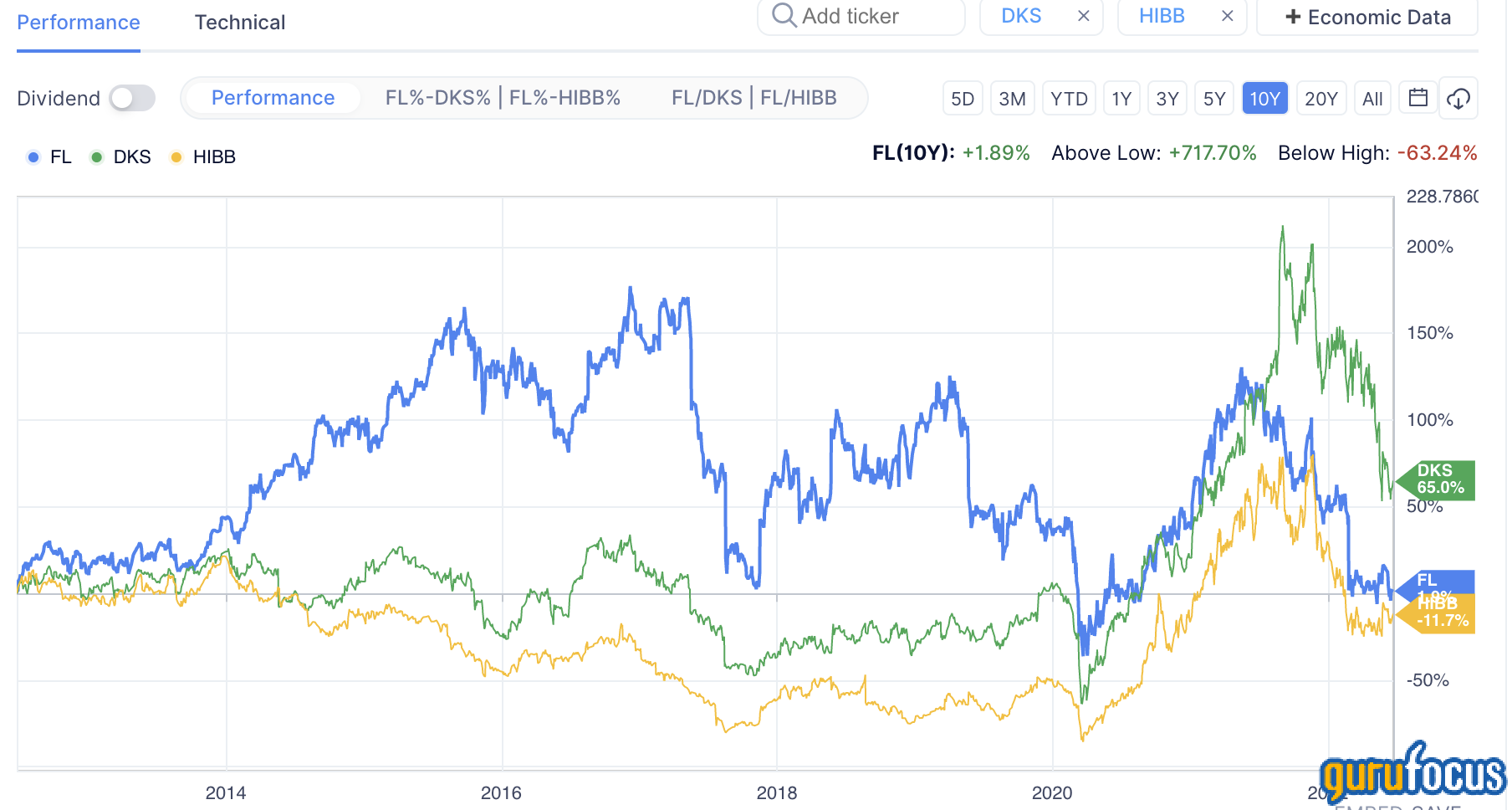 The profiles look much the same when dividends are included.

This 10-year chart shows how the share price could be defined with one word: volatile. 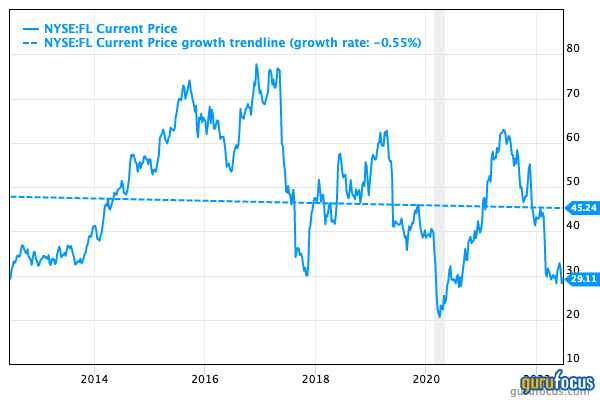 When Foot Locker regains the trust of the market, there is ample room for higher prices. In the meantime, it looks like an undervalued stock.

The PEG ratio also signals undervaluation. Over the past five years, Ebitda growth has averaged 7.90% per year, leading to a PEG ratio of 0.46. That is well below the fair value mark of 1.

The GF Value chart also thinks the company is significantly undervalued, to the point of being a potential value trap: 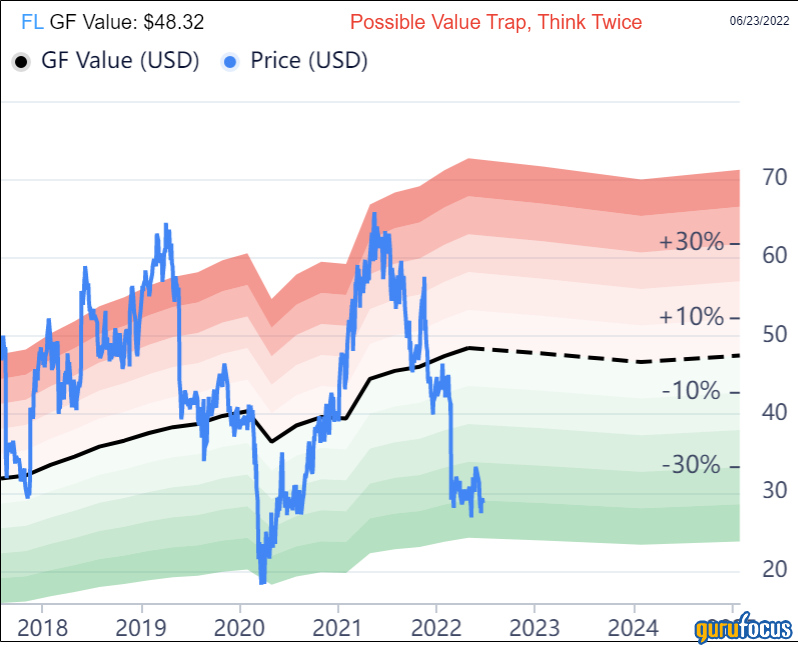 However, as we saw in the financial strength section above, the relative amounts of cash and debt make this a safe bet. The board is certainly confident; it paid out $38 million for dividends and $89 million on stock repurchases during the first quarter.

Finally, in this section, with a 3.5 out of five score for predictability, we can give at least modest credence to the discounted cash flow calculator. It sees a large margin of safety, and thus undervaluation: 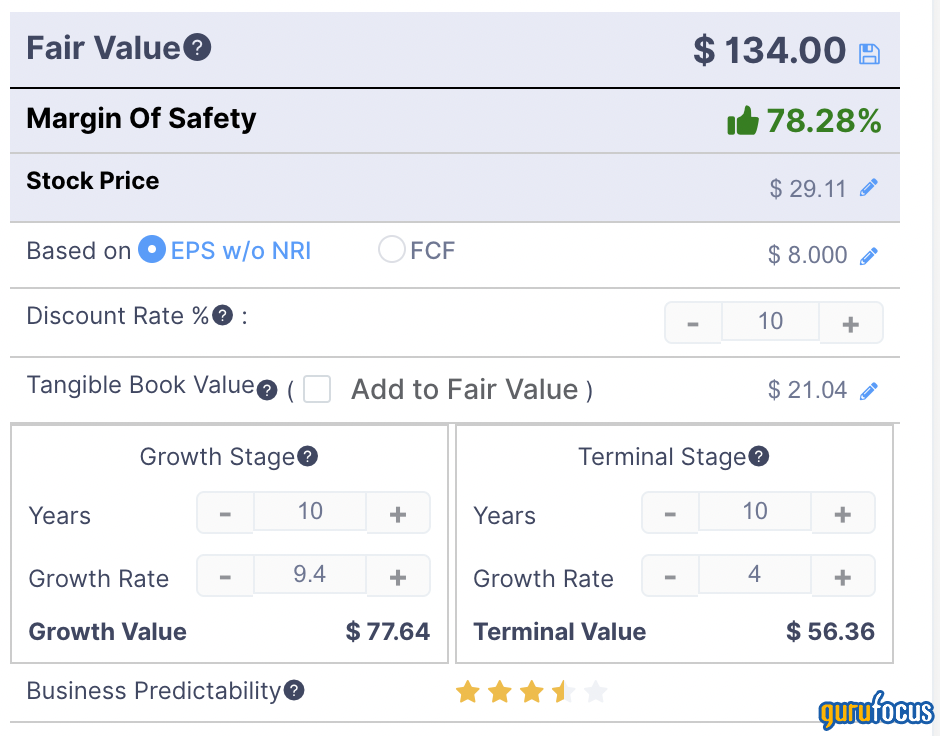 Five gurus have stakes in Foot Locker; the largest three stakes are those of:

Foot Locker investors have suffered as they watched their shares shrink in value for more than a year. For long-term investors, though, it is just another pothole on a bumpy road. Because of the company’s fundamentals, including its attractive dividend, we can be reasonably certain the price will rise again one of these days.

By all measures we have examined, the company is undervalued, largely because of external factors (its two main retail competitors have also slumped).

Shares of Foot Locker may be of interest to value investors who are flexible about debt, growth investors with a longer-term perspective and income investors who want above-average dividends.