3M: A Dividend King on Sale

Despite current and legacy problems, it remains a robust company paying a high and reliable dividend

MMM, Financial) almost two years ago, I asked if it was a bargain or a value trap. That same question could apply today with the share price even lower.

Then, as now, there appears to be a disconnect between market prices and the underlying value of this venerable company: 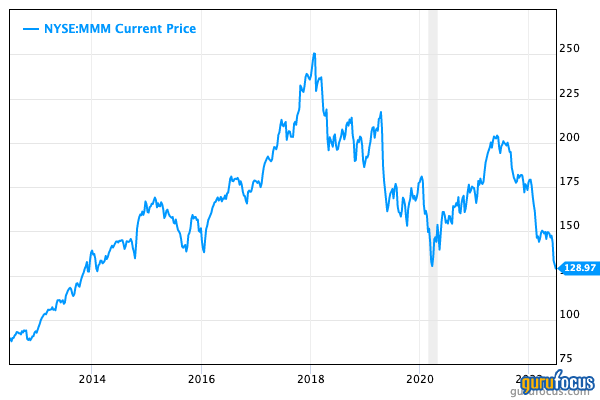 Formed in 1902, the company was incorporated in 1929 and, according to the 10-K filing for 2021, began paying dividends in 1916. The Investors’ section of its website reports that 3M has paid dividends every year for more than 100 years and increased its annual dividend for 64 consecutive years.

The latter makes it a Dividend King; it has increased the dividend every year for at least 50 years. Dividend Aristocrats qualify with 25 years of consecutive increases.

It calls itself a diversified technology company with four global lines of business:

For full-year 2021, it reported the following results:

One important reason is its historic use of a hazardous material. As pointed out in the annual filing, that concern is over “the environmental and health effects of a broad group of perfluoroalkyl and polyfluoroalkyl substances produced by the company, collectively known as 'PFAS.'”

“An adverse outcome in any one or more of these matters could be material to our financial results. For example, we recorded a pre-tax charge of $897 million, inclusive of legal fees and other related obligations, in the first quarter of 2018 with respect to the settlement of a matter brought by the State of Minnesota involving the presence of PFAS in the groundwater, surface water, fish or other aquatic life, and sediments in the state.”

As I noted in the previous discussion, PFAS is a tricky issue. While its use has environmental and health risks, these compounds are essential to modern life. They are arguably critical in the manufacture of electronic devices such as cell phones, tablets and semiconductors.

3M reports on its website that it is taking measures to deal with PFAS. It claims it has invested $200 million globally toward remediation, that it continues to research the issue and it provides a research clearinghouse. In Minnesota and Alabama, it has used capping and containment strategies at manufacturing and disposal sites.

While legal threats continue, ongoing profitability should allow it to pay for settlements, carry on with remediation efforts and maintain its research activities. In other words, a healthy 3M is good for everyone, including those suing the company.

The fundamentals suggest it is healthy and able to generate cash and long-term value. Indeed, it has a high GF Score indicating strength in all five sectors: 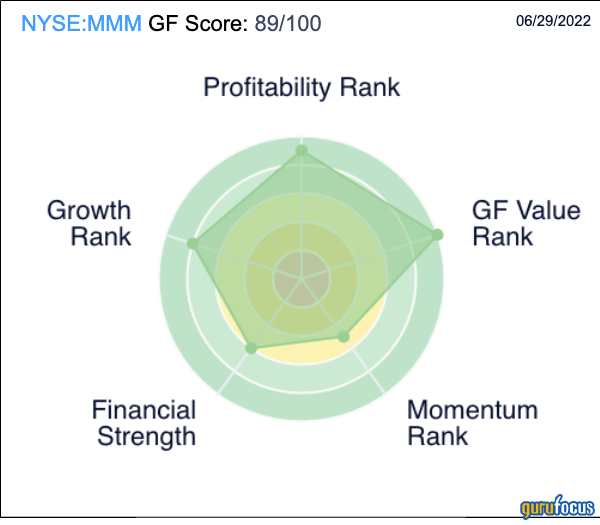 We might argue that assessment is backed by robust guru investments in 3M. They have been doing more buying than selling over the past two years:

There is also strength in numbers for 3M. It has a very high number of gurus as shareholders with 19 in total. The three biggest holdings are those of

Why the strong interest? That takes us back to the fundamentals.

Overall, it has a financial strength rank of 6 out of 10. Looking to specifics, the company has some debt, but also has an interest coverage ratio of 15.57, which is comfortable. It also has the wherewithal to create wealth; its weighted average cost of capital is 6.4%, less than half its return on invested capital of 15.58%.

3M’s financial health is also supported by free cash flow, which despite a couple of down years, has grown by an average of 4.52% per year over the past decade: 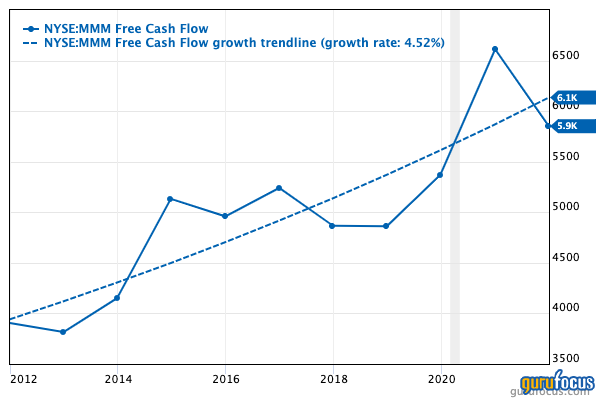 The ranking for profitability comes in at 9 out of 10, and by all metrics shown for this category, it outperforms the competition. A couple of specifics: The net margin is 15.84%, return on equity is 38.52% and it has been profitable every year for the past decade (despite legal and other PFAS costs).

3M receives a growth ranking of 8 out of 10, underlined by Ebitda and earnings per share without non-recurring items numbers that are higher than the revenue growth numbers.

Because the share price has seriously declined, the dividend yield is now above 4%. At the close of trading on June 28, it was 4.54%. Because the company grows the dividends per share every year, as it has done for the past 64 years, investors can be confident their dividends should keep growing faster than inflation.

It also has bought back shares quite consistently, reducing its share count by an average of 2.27% per year over the past 10 years. In 2021, it slipped on this measure, adding rather than repurchasing shares. Still, it resumed buybacks in the first quarter of this year.

3M ranked a full 10 out of 10 for value, even though it has neither a low price-earnings ratio nor a low PEG ratio.

However, the GF Value chart considers it significantly undervalued as the share price continues to wither.

On the other hand, the discounted cash flow calculator estimates the company is overvalued by 8.63%. That is based on a solid 4 out of 5 predictability rating.

There is no doubt 3M has its troubles, between external headwinds and the PFAS legacy. At the same time, though, it is a robust company now paying an above-average dividend. It is also likely to continue rewarding income investors well into the future.