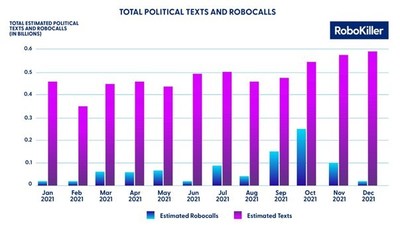 RoboKiller's robocall and spam text insights are powered by a global database of millions of known phone scams and audio fingerprints. Data is estimated by monitoring observed robocall and spam text trends for Americans who have trusted RoboKiller to stop their spam calls. For a comprehensive analysis of robocall trends in specific locations, details about particular phone scams, or any other related custom inquiries, please contact RoboKiller's robocall insights teamhere or at [email protected].

With more than 12 million downloads and $400 million in losses prevented, RoboKiller is the leading independent spam call and text blocker. RoboKiller has been named a leader in technical and mobile achievement by the Webby Awards, Media Excellence, Best in Biz, and more. RoboKiller was named the most effective solution to robocalls by the FTC.

RoboKiller's robocall and spam text insights are powered by a global database of millions of phone scams and audio fingerprints. RoboKiller's proprietary data insights have been featured by The New York Times, ABC World News, NBC Nightly News, and many others.

RoboKiller is available for download in the Apple App Store and Google Play. To learn more, visit www.robokiller.com.

RoboKiller, a Teltech brand, is a division of Mosaic Group, an IAC Company (NASDAQ: IAC).