A look at one of the most fundamentally sound businesses in the market.

Investors looking for high-quality companies with safe and reliable dividends may want to consider the Dividend Aristocrat index. This select group of companies within the S&P 500 Index has raised dividends for a minimum of 25 consecutive years.

This means that, at the very least, each of these companies has increased its dividend through the dot.com bubble burst, the Great Recession and the beginning of the Covid-19 pandemic. The ability to increase payouts when the economic backdrop is challenging is a reflection of a strong business model.

One lesser-known Dividend Aristocrat that has a dividend growth streak approaching three decades, has a market-beating yield and is trading at a steep discount to its GF Value is A.O. Smith Corporation (

A.O. Smith is one of the top names in the manufacturing of residential and commercial water heaters. The company’s products include gas, tankless and electric water heaters. A.O. Smith also supplies boilers, water system tanks and water treatment products. The company is valued at $8.5 billion and generates annual revenue of $3.5 billon.

A.O. Smith most recently reported its first-quarter 2022 earnings results on April 28. Revenue grew 27% year-over-year to $978 million. This follows a 21% increase in the top-line figure in the same period of 2021. Adjusted earnings per share of 77 cents compared favorably to 60 cents in the first quarter of last year and just 32 cents in the first quarter of 2020. Both revenue and adjusted earnings per share for the quarter came in slightly ahead of what Wall Street analysts had anticipated.

The company has seen strong growth rates following a decline in business at the beginning of the Covid-19 pandemic. Revenue growth has been in the double-digits for the past six consecutive quarters. Earnings growth has followed a similar trajectory.

This type of performance is not unusual for the company. According to Value Line, revenue has a compound annual growth rate (CAGR) of nearly 7% for the 2012 to 2021 period. Earnings per share growth has run ahead of revenue, as the bottom-line has improved 16.2% over the last decade. This level of growth has been helped somewhat by a reduction in the share count, but net profit has a CAGR of 14.4%.

A.O. Smith appears poised to continue to build on this success. According to Yahoo Finance, analysts project that the company’s revenue will increase 15% to $4.1 billion while earnings per share will grow 17.5% to $3.55 for full fiscal 2022.

It takes strong fundamentals to produce the results that A.O. Smith has seen over the last 10 years. Not only does the company have an impressive history, but it outranks much of its industry peers on multiple metrics. 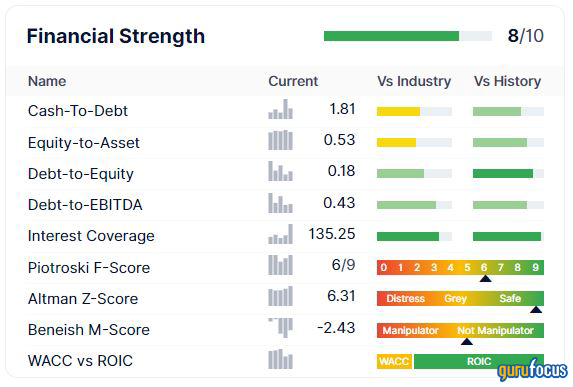 A.O. Smith receives an 8 out of 10 from GuruFocus on financial strength. In terms of cash-to-debt and equity-to-asset ratios, A.O. Smith ranks lower than about half of its industrial products peer group. On the other hand, both current scores are near the higher end of the company’s 10-year range.

The company performs much better relative to its peers in other areas. For example, interest coverage tops 83% of the industry, debt-to-Ebitda ranks better than 79% of peers and debt-to-equity is above 63% of the competition. All three scores are close to the best that A.O. Smith has seen in the last decade.

The Altman Z-score, which is used to determine if a company is in danger of bankruptcy, is a very strong 6.3. For context, anything above 3 means a company is in the safe zone.

A.O. Smith is getting a lot of bang for its buck as the company has a return on invested capital (ROIC) of 28.7%. This is well above its weighted average cost of capital (WACC) of 8.3%. 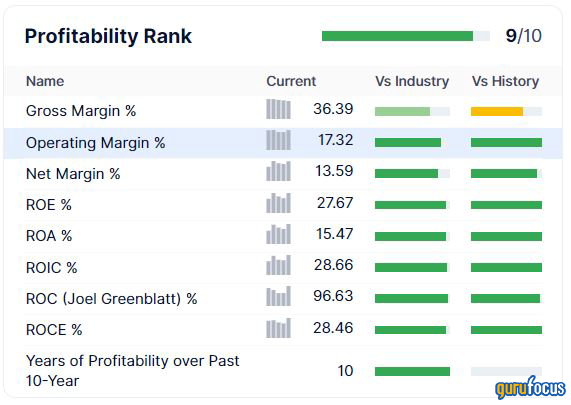 As solid as its financial strength, A.O. Smith’s profitability scorecard is one of the best in its industry as the company consistently outperforms 90% of its peers on the vast majority of metrics. A.O. Smith has been profitable every year for the last decade. This outranks 99.96% of the 2,610 companies in its industry. This is no small sample size as the company is clearly at the head of the class.

Return on equity, return on assets and return on invested capital are in the top 95% of the peer group. The operating margin and net margin are better than 88% and 85% of the competition, respectively. Each score is also one of the best of the last decade for A.O. Smith. The gross margin is the weakest performer, but still better than almost three-fourths of the group, though this is a middle of the road score in the company’s long-term history. 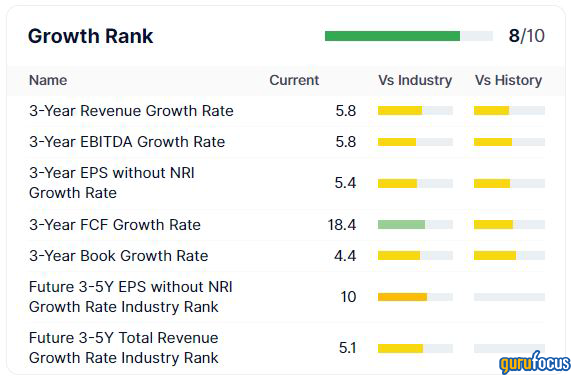 If there is a weak spot, however, it would be on growth. A.O. Smith has an 8 out of 10 ranking on growth, but many of its scores show a yellow bar, which is middle of the pack.

The three-year revenue growth rate is below 59% of peers while the three-year earnings per share without nonrecurring items growth rate is lower than 52% of the competition. The company has performed better than 63% of the industry on three-year free cash flow growth, which is important for those worried about dividend safety, but is close to the company's own median score since 2012. Going forward, A.O. Smith ranks below peers on future revenue and earnings growth estimates.

That said, A.O. Smith receives a very high GF Score of 91 out of 100, which takes into account profitability, growth, financial strength, momentum and valuation. 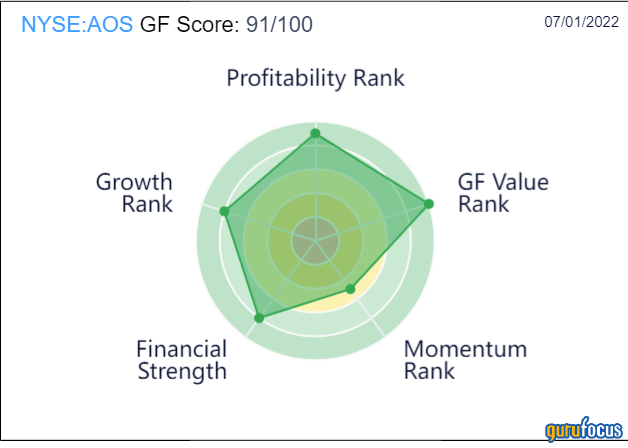 Debt obligations don’t appear to be much of a headwind either. The company had interest expense of just $4.8 million over the last year. Total debt stood at $320 million as of the most recent quarter, giving A.O. Smith a weighted average interest rate of 1.5%.

The table below illustrates where the company’s weighted average interest rate would need to be before free cash flow no longer covered divdiend payments.

A.O. Smith’s weighted average interest rate would need to reach 98.3% to not cover the company’s dividend payments. This is an incredibly high figure and shows just how few debt obligations the company has. Therefore, it is high unlikely that debt will stand in the way of A.O. Smith continuing to grow its divdiend.

Shares of the company yield 2% currently, just ahead of the average yield for the S&P 500 Index.

In addition to a safe dividend, A.O. Smith is trading at a discount to its intrinsic value according to the GF Value chart. 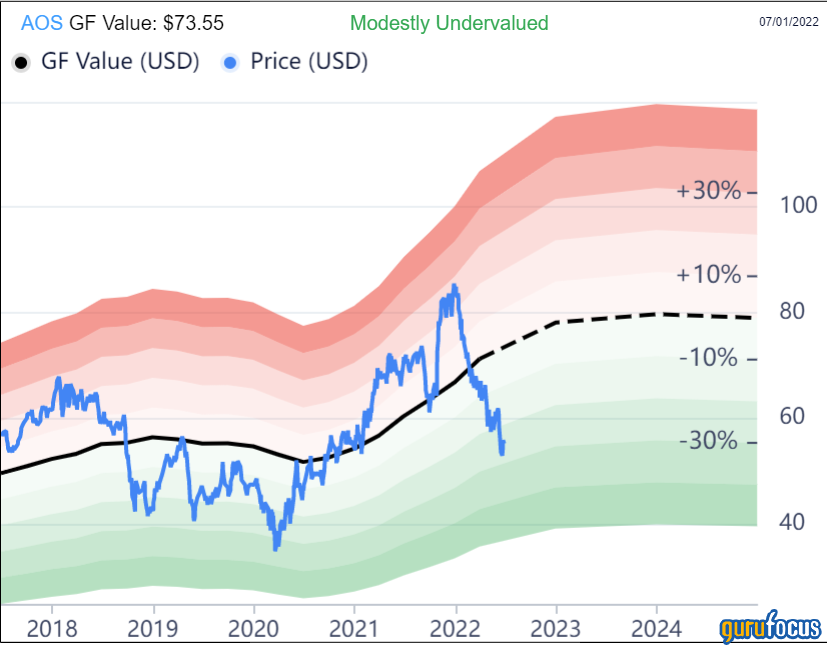 With a share price of $55.59 and a GF Value of $73.55, A.O. Smith has a price-to-GF-Value ratio of 0.75. Reaching the GF Value would mean a 32.5% gain in the stock price. Add in the divdiend and total returns could begin to approach the mid-30% range. GuruFocus rates the stock as modestly undervalued.

A.O. Smith has been a solid company for a long period of time. Blessed with some of the best fundamentals in its industry, the company clearly outperforms many of its peers.

The company’s dividend appears to be very safe when looking at the payout ratios, and debt levels are so manageable that they appear to pose no threat to future payments.

Finally, A.O. Smith is undervalued relative to its GF Value. All of these factors combined mean the stock could be an attractive value opportunity at this time, by my estimates.