This dominant beer and wine company from Chile is ridiculously cheap

CCU, Financial) (XSGO:CCU, Financial) is a dominant Chilean alcoholic beverage company based in Santiago that is selling at a price-earnings ratio of just over 11. Also known as United Breweries Co. Inc., it is the largest producer of beer in Chile. The company also produces nonalcoholic beverages, wines and spirits. The company's segments include Chile, International Business, Wines and Other.

It generates maximum revenue from Chile, where it is number one in beer and number two in wine. It is also the number two beer producer in Argentina, Colombia and Uruguay.

According to the GF Value Line, Cervecerías Unidas is significantly undervalued. The GF Score is also good at 85 out of 100, meaning it has high future outperformance potential.

The company produces and sells beer and wines in Chile, Argentina and Columbia, as well as several other smaller South American countries. In Chile, one of the wealthier countries in the region with a population of 45 million, it holds a dominant 45% share of the beverage market. 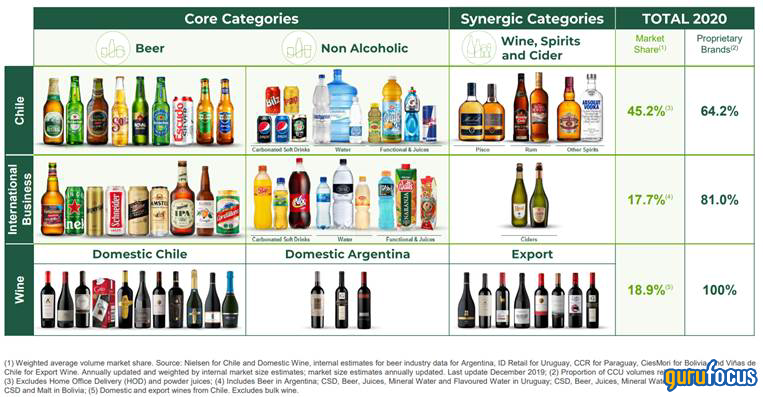 Cervecerías Unidas is listed on both the New York Stock Exchange and the Chilean Stock Exchange. Because the U.S. dollar has risen considerably against the Chilean peso, the stock price of U.S.-lsted shares has declined even more than on the Chilean exchange. 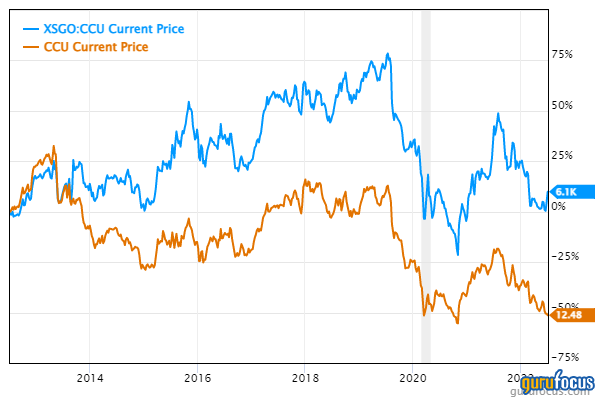 Currently, the stock is trading at a price-earnings ratio last seen during the depths of the Great Recession in 2008-09. This is a ridiculously low price for a dominant brewer with a vast network of plants and distribution centers in the region. The company has a wide moat because of its brands and network. 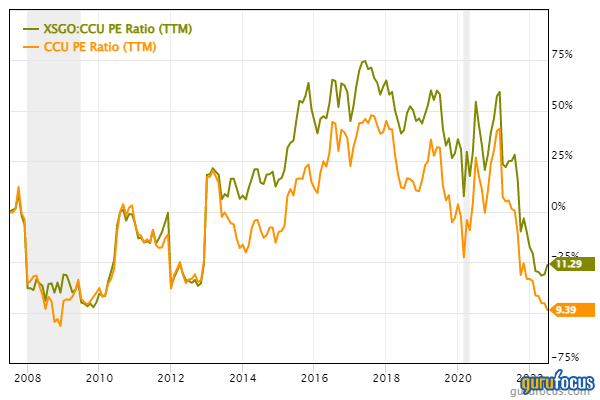 The following table lays out Cervecerías Unidas' growth numbers, which have accelerated over the past year.

The company is controlled by a joint venture between Heineken (

XAMS:HEIO, Financial) and Quinenco SA (XSGO:QUINENCO, Financial), a Chilean conglomerate controlled by the wealthy Luksic family. The ownership chart is as follows: 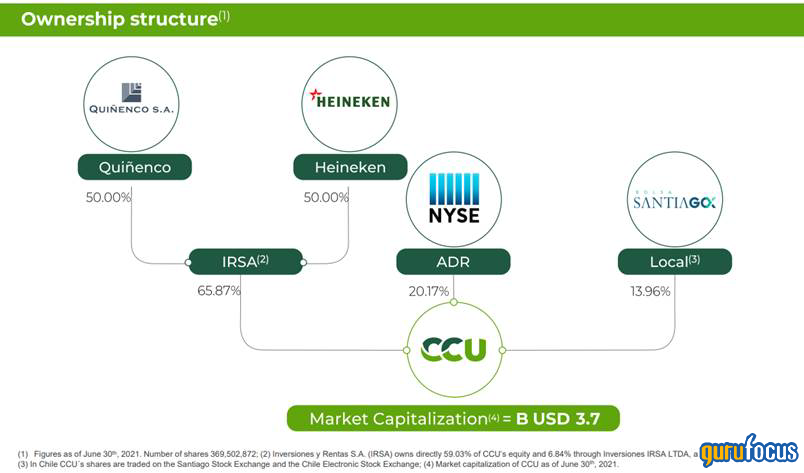 The company is shareholder-friendly and pays an excellent but variable dividend depending on business results. The trailing dividend yield is 12.42% (which included a special dividend), but its regular dividend yield is over 5%. Cervecerías Unidas' sales have grown about 9% annually over the past 20 years and its net income has grown at a compound annual rate of about 8.5%. The balance sheet is healthy with a debt-to-equity ratio of 0.77, while its bonds are investment grade and rated AA+.

Cervecerías Unidas has been beaten down by currency issues, the aftermath of the Covid-19 pandemic and now the current bear market. With a worldwide surge in inflation and resource prices, I feel the Chilean peso will appreciate considerably. Economic forecasts suggest the currency can appreciate 20% to 30% from here over the next 12 months. This together with Cervecerías Unidas' business recovery, which is well underway, can deliver outstanding results.

The stock traded on the NYSE at around $27 in 2019 before the pandemic. I think it could reach that level in the next two years. As such, it could be a good time to consider this dominant, wide-moat beverage company while it is still beaten down but on the cusp of recovery.