On Monday, clean energy stocks rallied on the news that the Inflation Reduction Act passed the U.S. Senate. The bill, which includes nearly $370 billion in provisions to spur the nation’s transition to clean energy, is expected to pass the House as early as this week, barring an unlikely break in party lines.

Alongside those cheering the positives, there are some investors denouncing clean energy stocks as bad investments precisely because of the government subsidies. Their argument is that if a company needs “government handouts” in order to grow, then it is doomed to provide lackluster returns for investors.

However, the critics seem to be overlooking the billions of dollars in annual subsidies that are granted to companies in other industries, especially the fossil fuel industry. What they fail to realize is that money is money, regardless of where it comes from.

From fossil fuels to railroads to defense and more, history is full of examples of government spending driving innovation, reshaping infrastructure for the better and passing cash right along to investors’ wallets. Given that a rapid transition to clean energy is necessary not only for the planet, but also for the U.S. to avoid falling behind other countries on the technology front, I believe this case will be no exception to the rule.

In order to understand the effects that government subsidies have on shareholder returns, let’s first take a look at two of the industries that receive regular cash injections from the government: fossil fuels and defense.

An IRENA report tracked approximately $634 billion in energy subsidies in the U.S. in 2020, about 70% of which went to fossil fuels compared to 20% for renewables, 6% for biofuels and 3% for nuclear.

Regular cash injections have helped these companies get off the ground, remain solvent in times of crisis and boost earnings in favorable macroeconomic conditions. For example, over the past year, the energy sector is up by 32%, much higher than the S&P 500 or any of its other component sectors. Perhaps the sector would have still posted gains without government assistance, but extra cash certainly helps. 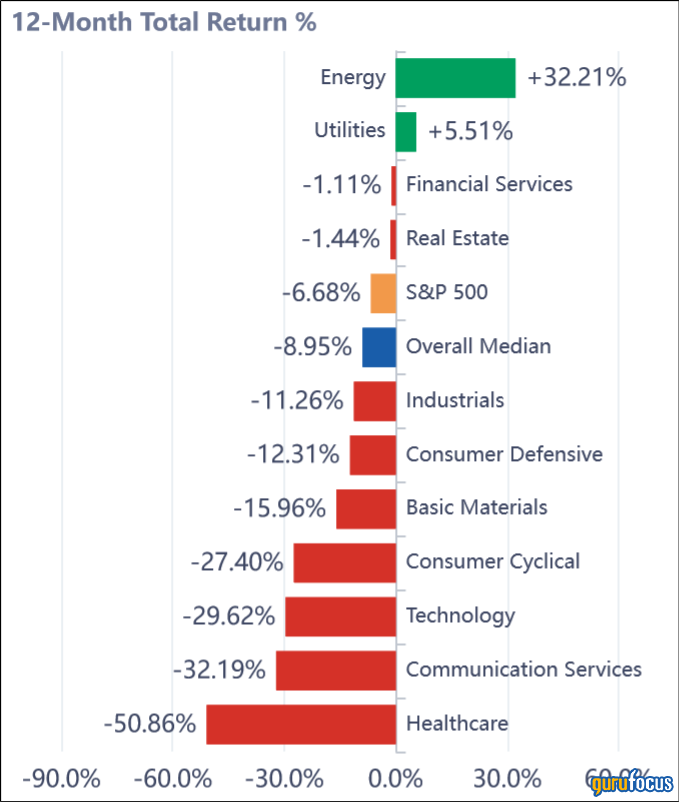 Government subsidies for oil and gas companies are about as old as the U.S. itself, tracing their roots back to 1789. They have been instrumental in the growth of the industry as well as profits for investors (though, since fossil fuel stocks are highly cyclical, investing in the sector may not be for everyone).

Another government-funded collection of publicly traded companies can be found in the defense industry. Let’s face it, if funding for the defense industry were left up to private citizens, it is unlikely that the defense giants would be where they are today. Most of us cannot just go out and buy tanks or missile systems; this is an industry that operates entirely in the government’s domain.

Most years, somewhere between 11% and 13% of the U.S. federal budget goes toward defense, broken down into the following categories: operations and maintenance, military personnel, procurement of weapons and research and development. That does not even take into consideration grants from state and local governments.

Does that mean these companies are bad investments? Not necessarily. These stocks tend to behave like other industrial manufacturers and can provide steady capital gains if they remain on the cutting edge of technology and cost effectiveness. Some also provide solid dividend yields.

While the fossil fuel and defense examples hold more relevance for the clean energy sector, the root of the claims that government subsidies are indicative of bad investments can likely be found in the transportation sector.

Then there is the railroads, which exist as monopolies because of massive government land grants. In order to achieve peak efficiency in the transportation of essential goods across the country, these monopolies are necessary.

Government support has certainly been a boon to investors in this case. Railroad stocks are broadly considered to be good safety investments because their customers literally have no other choice, giving them high profitability, an unassailable moat and good return on capital. Though their growth potential is limited, they are able to focus on rewarding shareholders due to business stability.

Clean energy is getting off the ground

Given the history of fossil fuel subsidies, it seems very likely that clean energy companies will continue to benefit from government funding for as long as the sector’s growth is beneficial to national prosperity.

That is why many clean energy stocks look like a steal at the moment. In addition to direct grants and tax credits, including an expansion of the $7,500 tax credit for buying an electric vehicle, some analysts expect the legislation could trigger a slew of private investments in clean energy as well due to the improved profitability outlook.

Even if the Inflation Protection Act and its boost to the clean energy sector fails to pass, I still expect to see increased government subsidies for clean energy at some point in the future due to the precedent set by the fossil fuel industry.