When picking stocks, the guru's Omaha, Nebraska-based firm combines Benjamin Graham's principles of price sensitivity and insistence on margin of safety with a conviction that qualitative factors that allow the company to control its future can be more important than statistical metrics like book value and earnings.

In his second-quarter letter for the Partners III Opportunity Fund, Weitz commented that market returns in the first two quarters of 2022 “made for the most challenging start to a year in decades, as inflation approached a 40-year high.”

“After years of accommodative monetary policy, the Federal Reserve has assertively reversed course, engaging in a series of progressively larger interest rate hikes. The Fed has acknowledged these actions have increased recessionary risks but are necessary to quash inflation expectations before they fully take root. The inflation fight is far from over, however, with more interest rate hikes on the horizon. Meanwhile, swift market declines reflect investors' diminishing hopes for a so-called “soft landing” (i.e., implementing tighter monetary policy without triggering a recession).”

Keeping these considerations in mind, Weitz was active on both the buy and sell sides of the trading ledger during the three months ended June 30. According to 13F filings with the SEC, he entered one new position during the quarter, which was Adobe Inc. (

ADBE, Financial), sold out of three stocks and added to or trimmed a number of existing investments. Other notable trades included the divestment of AutoZone Inc. (AZO, Financial), increased bets on Danaher Corp. (DHR, Financial) and Roper Technologies Inc. (ROP, Financial) and a reduction of the Markel Corp. (MKL, Financial) holding.

ADBE, Financial), allocating 1.16% of the equity portfolio to the position. The stock traded for an average price of $407.76 per share during the quarter.

The GF Value Line suggests the stock is modestly undervalued currently based on its historical ratios, past financial performance and analysts’ future earnings projections. 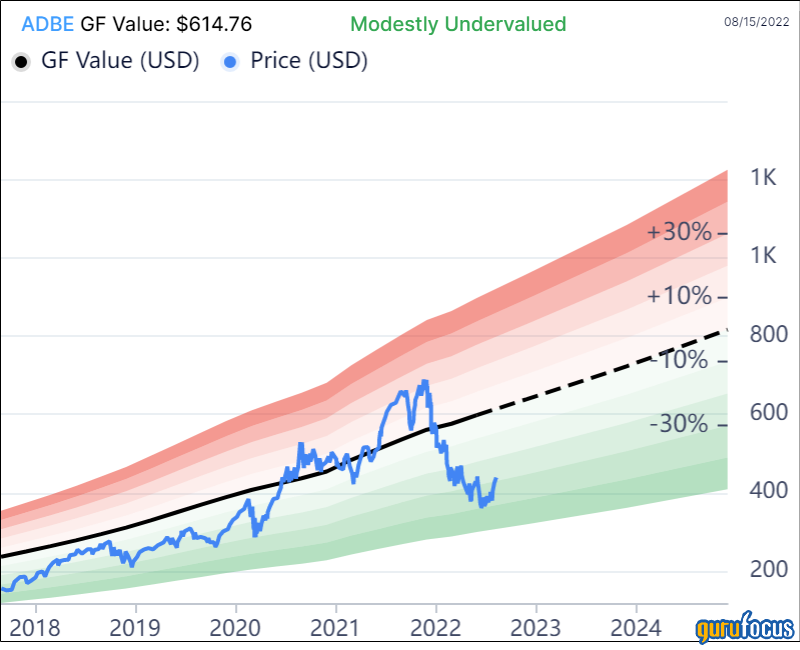 GuruFocus rated Adobe’s financial strength 8 out of 10, driven by a comfortable level of interest coverage and a robust Altman Z-Score of 12.94 that implies it is in good standing. The return on invested capital also overshadows the weighted average cost of capital, indicating value is being created as the company grows.

The company’s profitability scored a 9 out of 10 rating on the back of an expanding operating margin, strong returns on equity, assets and capital that outperform a majority of competitors and a moderate Piotroski F-Score of 6 out of 9, indicating conditions are typical of a stable company. Adobe also has a predictability rank of two out of five stars. According to GuruFocus research, companies with this rank return an average of 6% annually over a 10-year period.

Of the gurus invested in Adobe,

The guru sold his 24,185 remaining shares of AutoZone (

AZO, Financial). The transaction had an impact of -2.21% on the equity portfolio. During the quarter, shares traded for an average price of $2,056.43 each.

GuruFocus estimates Weitz gained 51.85% on the investment over its lifetime.

The aftermarket auto parts retailer, which is headquartered in Memphis, Tennessee, has a market cap of $44.49 billion; its shares were trading around $2,275.44 on Monday with a price-earnings ratio of 20.25 and a price-sales ratio of 3.06. 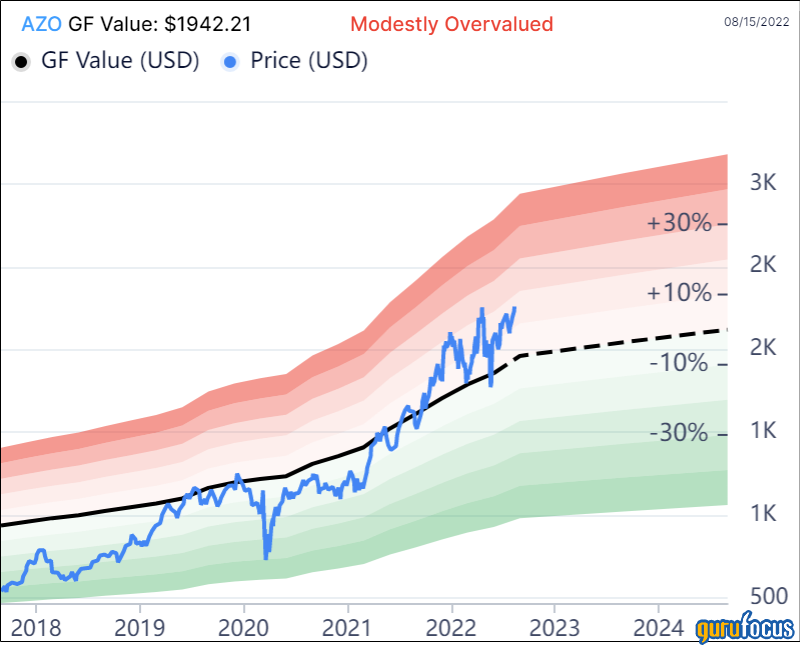 AutoZone’s financial strength was rated 4 out of 10 by GuruFocus. Although the company has issued new long-term debt over the past several years, it is manageable due to adequate interest coverage. The Altman Z-Score of 2.94, however, suggests it is under some pressure. Value creation is also occurring since the ROIC eclipses the WACC.

The company’s profitability fared much better, scoring a 10 out of 10 rating. In addition to operating margin expansion, AutoZone is supported by strong returns that top a majority of industry peers and a moderate Piotroski F-Score of 6. Consistent earnings and revenue growth contributed to a five-star predictability rank. GuruFocus data shows companies with this rank return an average of 12.1% annually.

With an impact of 1.21% on the equity portfolio, the investor boosted the Danaher (

Weitz now holds 247,532 shares total, accounting for 0.03% of the equity portfolio. The guru has gained approximately 82.64% on the investment since the third quarter of 2017.

The Washington, D.C.-based company, which manufactures professional, medical, dental and industrial products, has a $217.54 billion market cap; its shares were trading around $299.31 on Monday with a price-earnings ratio of 35.22, a price-book ratio of 4.84 and a price-sales ratio of 7.12.

Based on the GF Value Line, the stock appears to be fairly valued. 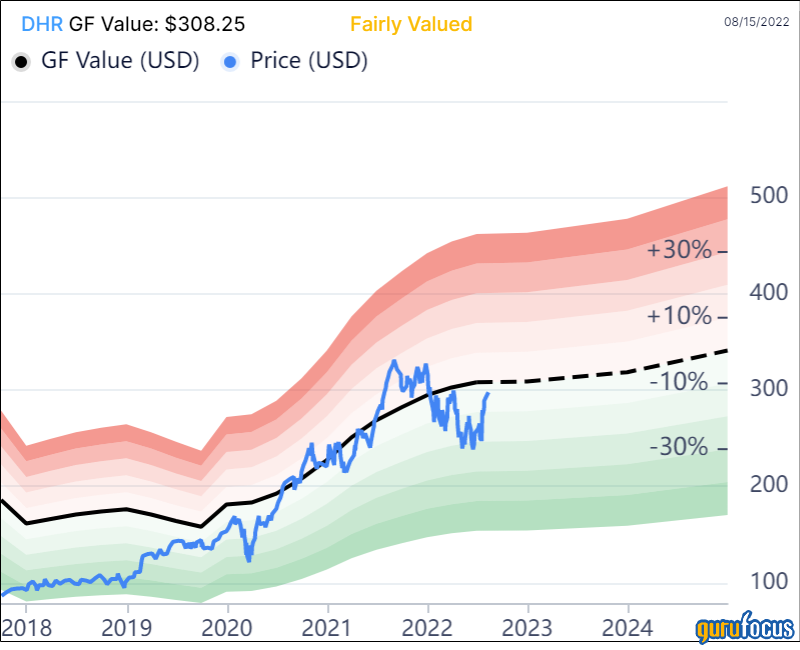 GuruFocus rated Danaher’s financial strength 7 out of 10. Despite the company issuing new long-term debt over the past three years, it is at a manageable level as a result of sufficient interest coverage. The robust Altman Z-Score of 5.08 also indicates the company is in good standing despite assets building up at a faster rate than revenue is growing. Value is also being created due to the ROIC exceeding the WACC.

The company’s profitability fared better with an 8 out of 10 rating, driven by operating margin expansion, strong returns and a high Piotroski F-Score of 8, which means conditions are healthy. Danaher also has a one-star predictability rank. GuruFocus says companies with this rank return, on average, 1.1% annually.

Impacting the equity portfolio by 0.52%, Weitz upped his Roper Technologies (

The guru now holds 102,300 shares total, which represent 2.13% of the equity portfolio. GuruFocus data shows he has lost approximately 0.85% on the investment so far.

The technology company headquartered in Sarasota, Florida, which manufactures software and engineered products for niche markets, has a market cap of $46.52 billion; its shares were trading around $439.73 on Monday with a price-earnings ratio of 16.33, a price-book ratio of 3.38 and a price-sales ratio of 8.06. 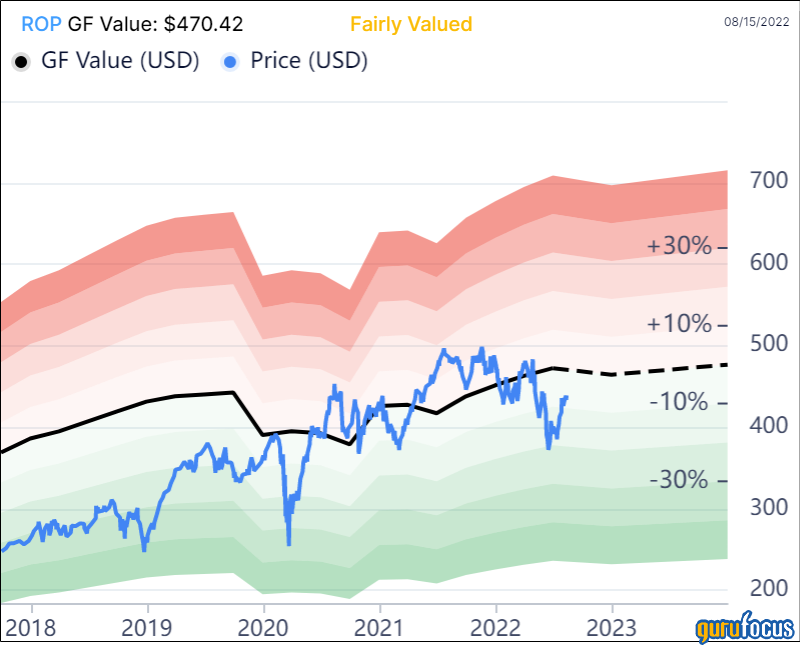 Roper’s financial strength was rated 6 out of 10 by GuruFocus on the back of adequate interest coverage. Although assets are building up at a higher rate than revenue is growing, the high Altman Z-Score of 3.56 suggests the company is in good standing. The WACC surpasses the ROIC, however, indicating it is struggling to create value.

The company’s profitability scored a 9 out of 10 rating due to margins and returns that outperform a majority of competitors and a moderate Piotroski F-Score of 5. As a result of steady earnings and revenue growth, Roper has a five-star predictability rank.

Of the gurus invested in Roper, Akre has the largest stake with 1.56% of its outstanding shares.

Weitz now holds 39,340 shares in total, which make up 2.69% of the equity portfolio. Based on GuruFocus data, he has gained 12.55% on the investment since establishing it in the first quarter of 2018. 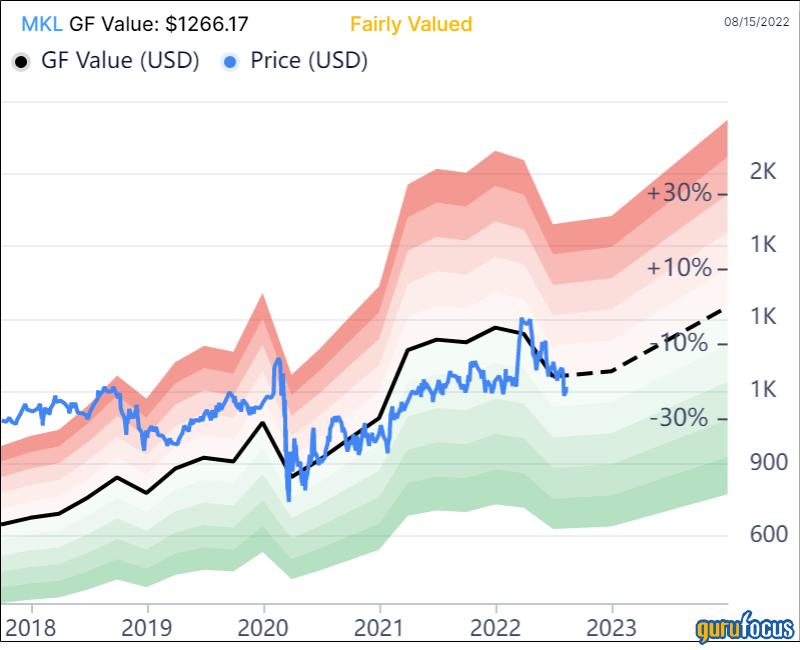 GuruFocus rated Markel’s financial strength 5 out of 10. As a result of the company issuing new long-term debt in recent years, it has weak interest coverage. It is also struggling to create value since the WACC outshines the ROIC.

The company’s profitability scored a 7 out of 10 rating even though its margins and returns are underperforming versus a majority of industry peers. Markel also has a moderate Piotroski F-Score of 5. Due to a decline in revenue per share growth over the past 12 months, the 2.5-star predictability rank is on watch. GuruFocus found companies with this rank return, on average, 7.3% annually.

During the quarter, Weitz also added to the CarMax Inc. (

Slightly over half of the guru’s $1.89 billion equity portfolio, which is made up of 55 stocks, is invested in the financial services and communication services sectors.