Known for being a distressed-debt specialist, filings show the billionaire guru’s firm focuses on investing in equities and debt of distressed companies, exchange warrants, options, futures notes and junk bonds. In 2019, Tepper converted his hedge fund into a family office as a result of becoming the owner of the Carolina Panthers NFL football team.

Based on these considerations, the 13F filing for the three months ended June 30 shows Tepper entered eight new positions, sold out of 12 stocks and added to or trimmed a number of other existing investments. Notable trades for the period included a new stake in Constellation Energy Corp. (

CEG, Financial), allocating 9.71% of the equity portfolio to the stake. The stock traded for an average price of $60.08 per share during the quarter.

The stock is now his fourth-largest holding.

The Baltimore-based utility company, which provides electric power, natural gas and energy management services, has a $26.52 billion market cap; its shares were trading around $81.17 on Wednesday with a price-earnings ratio of 41.22, a price-book ratio of 2.43 and a price-sales ratio of 1.27.

Since being spun off of Exelon Corp. (

EXC, Financial) at the beginning of February, the stock has climbed over 90%. 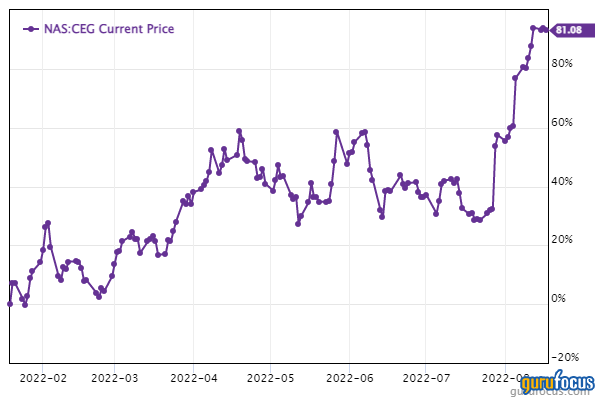 GuruFocus rated Constellation’s financial strength 5 out of 10. Despite having sufficient interest coverage, the low Altman Z-Score of 1.05 warns the company could be at risk of bankruptcy if it does not improve its liquidity. The return on invested capital is also being overshadowed by the weighted average cost of capital, meaning it is struggling to create value.

The company’s profitability did not fare as well, scoring a 3 out of 10 rating on the back of margins and returns on equity, assets and capital that are underperforming at least half of its competitors. Constellation Energy has also recorded a decline in revenue per share over the past three years.

Of the gurus invested in Constellation Energy, Tepper has the largest stake with 0.83% of its outstanding shares. Donald Smith & Co.,

The investor upped the Kohl’s (

He now holds 1.87 million shares total, accounting for his ninth-largest holding with a weight of 4.2%. GuruFocus estimates Tepper has gained 12.51% on the investment so far.

The retailer headquartered in Menomonee Falls, Wisconsin, which operates a chain of department stores across the U.S., has a market cap of $4.44 billion; its shares were trading around $34.49 on Wednesday with a price-earnings ratio of 5.37, a price-book ratio of 0.99 and a price-sales ratio of 0.25.

The GF Value Line suggests the stock is significantly undervalued currently based on historical ratios, past financial performance and analysts’ future earnings projections. 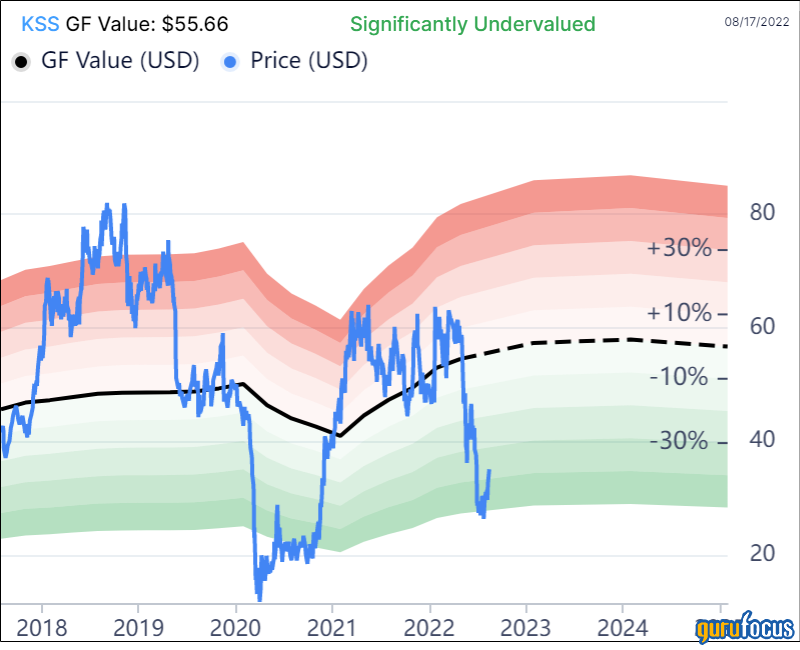 Kohl’s financial strength was rated 5 out of 10 by GuruFocus, driven by adequate interest coverage and a high Altman Z-Score of 3.25 that indicates it is in good standing.

The company’s profitability fared better with a 7 out of 10 rating. In addition to margins and returns that are outperforming versus industry peers, Kohl’s has a high Piotroski F-Score of 7 out of 9, meaning operations are healthy. It also has a predictability rank of one out of five stars. According to GuruFocus research, companies with this rank return an average of 1.1% annually over a 10-year period.

Impacting the equity portfolio by -4.76%, the guru slashed the Micron Technology (

Tepper now holds 575,000 shares in total, which represent 2% of the equity portfolio. GuruFocus says he has gained an estimated 14.26% on the investment since establishing it in the fourth quarter of 2016. 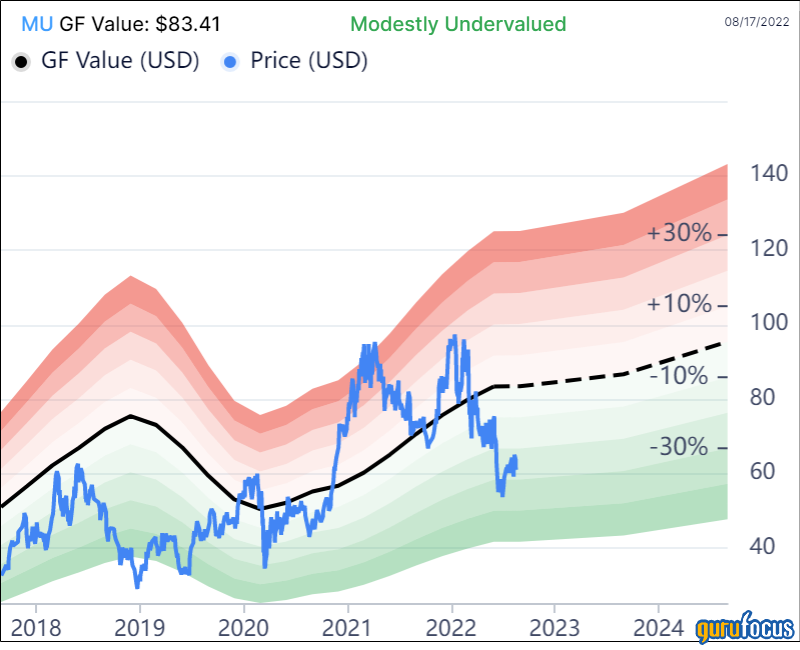 GuruFocus rated Micron’s financial strength 8 out of 10 on the back of sufficient interest coverage and a high Altman Z-Score of 4.97 that indicates the company is in good standing even though assets are building up at a faster rate than revenue is growing. The ROIC also eclipses the WACC, so value is being created.

The company’s profitability scored a 9 out of 10 rating due to operating margin expansion and strong returns that outperform a majority of competitors. It also has a high Piotroski F-Score of 8, while consistent earnings and revenue growth contributed to a 4.5-star predictability rank. GuruFocus data shows companies with this rank return, on average, 10.6% annually.

With an impact of -4.46% on the equity portfolio, Tepper curbed the Occidental Petroleum (

The guru now holds 875,000 shares, which make up 3.23% of the equity portfolio. So far, he has gained an estimated 188.26% on the investment based on GuruFocus estimates.

The oil and gas producer headquartered in Houston has a market cap of $59.50 billion; its shares were trading around $63.88 on Wednesday with a price-earnings ratio of 6.11, a price-book ratio of 3.29 and a price-sales ratio of 1.84. 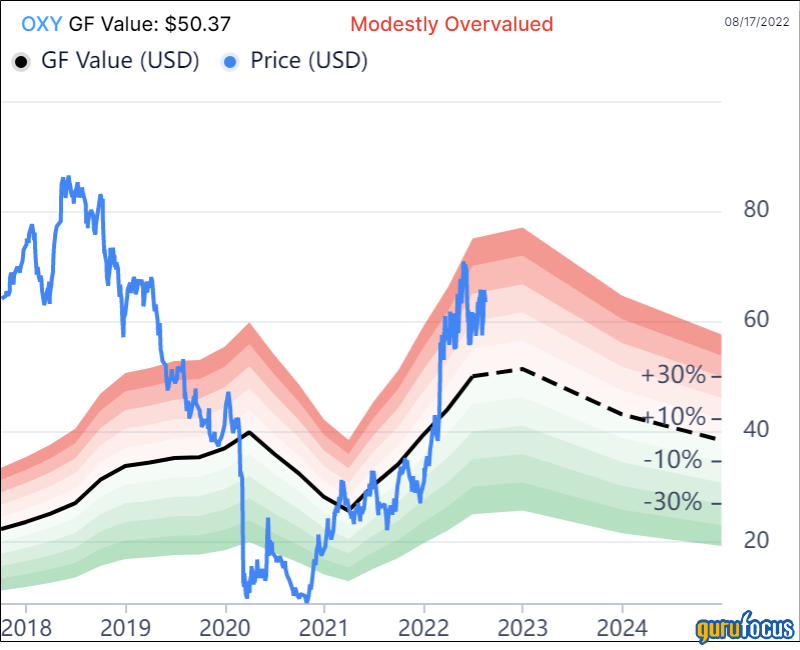 Occidental’s financial strength was rated 5 out of 10 by GuruFocus. Despite having adequate interest coverage, the Altman Z-Score of 3.01 also suggests it is under some pressure since assets are building up at a faster rate than revenue is growing. However, value creation is occurring since the ROIC exceeds the WACC.

The company’s profitability fared better with a 7 out of 10 rating, driven by strong margins and returns that top a majority of industry peers. Occidental also has a high Piotroski F-Score of 7 and a one-star predictability rank.

Of the gurus invested in Occidental,

The investor reduced the PG&E (

PCG, Financial) position by 87.51%, selling 5.25 million shares. The transaction has a -2.51% impact on the equity portfolio. Shares traded for an average price of $11.76 each during the quarter.

Tepper now holds 750,000 shares, giving it 0.47% space in the equity portfolio. GuruFocus says he has lost an estimated 6.42% on the investment over its lifetime. 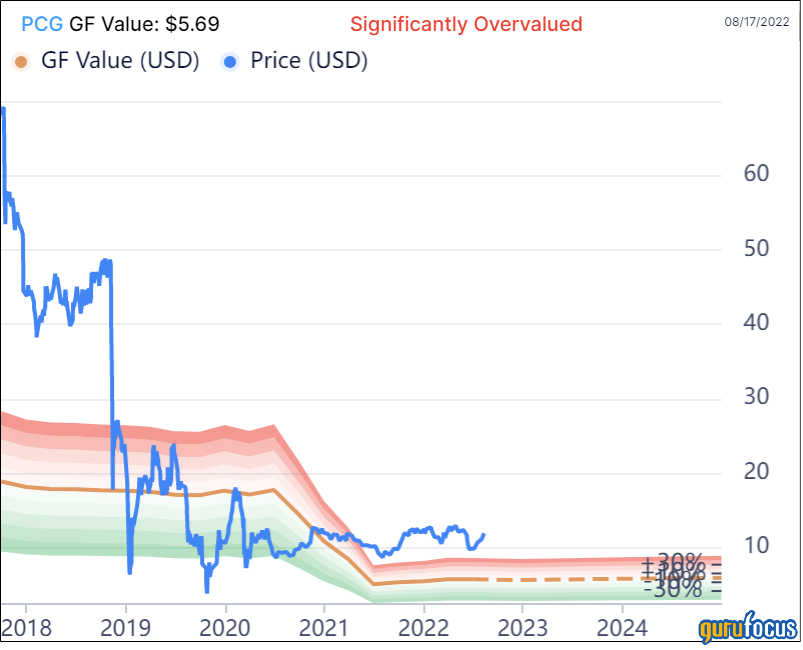 GuruFocus rated PG&E’s financial strength 3 out of 10. As a result of the company new long-term debt over the past three years, it has weak interest coverage. Further, the Altman Z-Score of 0.32 warns the company could be in danger of bankruptcy. The WACC also surpasses the ROIC, meaning it is struggling to create value.

The company’s profitability scored a 5 out of 10 rating on the back of a declining operating margin and returns that underperform a majority of competitors. It also has a moderate Piotroski F-Score of 6, indicating conditions are typical for a stable company. Despite recording declines in revenue per share in recent years, PG&E still has a one-star predictability rank.

During the quarter, Tepper also established a position in Salesforce Inc. (

The guru’s $1.59 billion equity portfolio, which is composed of 30 stocks, is largely invested in the communication services, consumer cyclical and energy sectors.